More Everyman than movie star, Jack Lemmon had a way of being just about our size. 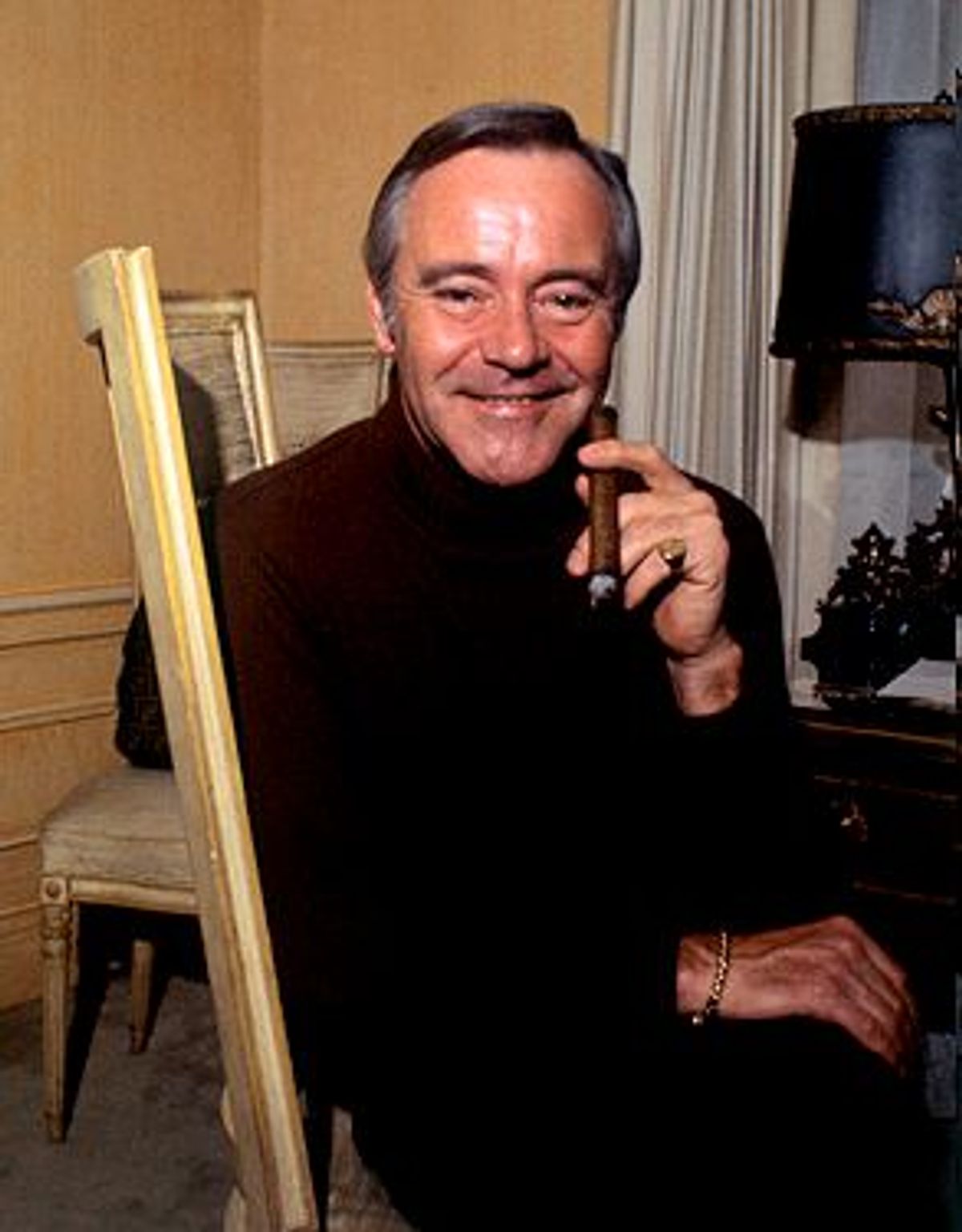 "The Apartment," the film for which Jack Lemmon earned an Oscar nomination in 1960, is one of my favorite movies, and yet somehow it would never occur to me to call Lemmon, who died of cancer Wednesday at the age of 76, one of my favorite movie stars. In fact, he hardly seemed a movie star at all, since the term is usually reserved for people with unearthly qualities. Fred Astaire, who once was my favorite movie star, was also more graceful than a human being has any right to be; Cary Grant, another crush, was preternaturally handsome, self-possessed and witty.

Lemmon, on the other hand, had an entirely terrestrial charm. C.C. Baxter, the beleaguered, well-intentioned and miserably compromised low-level corporate striver Lemmon played in "The Apartment," resembles the kind of man any of us might actually meet, date or, for that matter, be. He's not, however, a "regular guy" after the cornfed fashion of Jimmy Stewart or his urban counterpart, Spencer Tracy. Those were men whose personalities seemed to constellate, without effort or question, around a unified idea of themselves. A Harvard man (but let's not hold that against him), Lemmon created a screen persona who was smarter than the average Joe, and like all obviously intelligent characters in American films, he had to be handicapped -- in his case by neurosis. (John Malkovich, by contrast, embodies the notion of braininess as a kind of perversion.)

In supporting roles, Lemmon often played fussy, irritable or anxious types who serve as a foil to the hero, or schemers, like Ensign Pulver in "Mister Roberts"; there's always a hungry agitation in these characters, and you can understand why the film critic David Thomson said that "sometimes one squeeze of Lemmon is enough to set my teeth on edge." Lead parts, however, made better use of the avid way he'd lean into a scene with his chin or how you could see his character's thoughts detach from the proceedings and spin off into a little eddy of fantasy. It's the eager, bustling way he plays host to the postsuicidal Shirley MacLaine in "The Apartment" (his boss has just broken off an adulterous affair with her) that reveals how lonely Baxter is and how much he's been stifling his own basic decency -- that brief, blooming moment of happiness is more heart-rending than tears.

The quintessential Jack Lemmon character doesn't quite know who he is, and that leaves him susceptible to the imperatives of others. As Tony Curtis' bass-playing, cross-dressing sidekick in "Some Like It Hot" (directed, as "The Apartment" was, by Billy Wilder), he gets so swept up in Joe E. Brown's extravagantly romantic courtship of his female alter ego that he forgets for much of the movie that he's a man. Baxter focuses so single-mindedly on climbing the corporate ladder that he doesn't notice the downward slide of his morals. The charisma of most movie stars comes from the uncomplicated way they inhabit their own identities -- however much they may seek to change their circumstances, they are always entirely themselves. But Lemmon's nebbishy characters were forever trying on new personalities -- from up-and-coming vice president to flapper femme fatale -- only to lapse back, disappointed, into their obdurately ordinary lives.

That made him more like us, the people watching, the people acutely aware of what watchable people look like, the people who buy movie tickets in order to imagine, for a couple of hours, what it must be like to be the kind of person people watch. At his most winning, Lemmon also lets us see what his characters can't, which is how dear they are. The real C.C. Baxter -- not the guy shooting for a corner office, but the guy who strains his spaghetti with a tennis racket and tries to cheer up a brokenhearted woman with a game of gin rummy -- is already, without the corner office, a fine man, and the whole point of "The Apartment" is getting him, and MacLaine, to recognize that.

Although his career spanned a good 40 years, Lemmon's film persona always seemed enmeshed in the ethos of the 1950s; I can't quite picture him without a narrow-lapeled suit and a thin dark tie. Whether he's playing a turn-of-the century French policeman (in "Irma La Douce") or an overwhelmed suburbanite stumbling through New York in the 1970s ("The Out-of-Towners") he represents the American penchant for believing that there exists a set of rules which, if followed, produce a satisfactorily successful life. His darker roles -- as an alcoholic in "The Days of Wine and Roses" and as a burned-out businessman in "Save the Tiger" (for which he won an Oscar), "The Prisoner of Second Avenue" and "Glengarry Glen Ross" -- feel like variations on Willy Loman, men profoundly baffled by the failure of convention to deliver on its promises and the unexpected despair that can ambush even those who play it safe. Perhaps especially those who play it safe.

Lemmon's characters are among the saddest in the movies because they are squandering, or have squandered, their formidable ferocity and brains on what's typically a paltry vision. All that thwarted energy makes itself felt as an angry, burning wit. There's a savagery to Lemmon's sarcasm that you don't find in, say, the technically sharper barbs of Woody Allen, whose characters, while equally lustful and cowardly, know better than to expect society to play fair and live up to its promises. For however funny-looking and neurotic Allen's characters may be, they still have the imagination and the daring to pursue their desires on their own terms, in an almost flagrant embrace of their own inadequacies.

Not many of us in the audience have that confidence, and that's why Allen is a movie star and Lemmon was our Everyman. It's the ways that movie stars are larger than life that makes us dream of being like them and makes them easy to adore. It was Jack Lemmon's way of being just about our size that makes us recognize him -- but it must have been his own mysterious portion of divinity that made him so easy to love.