The quiet death of prime-time propaganda

With no fanfare, the White House drug office pulls the plug on its controversial program to pay TV networks for putting anti-drug messages in popular shows. 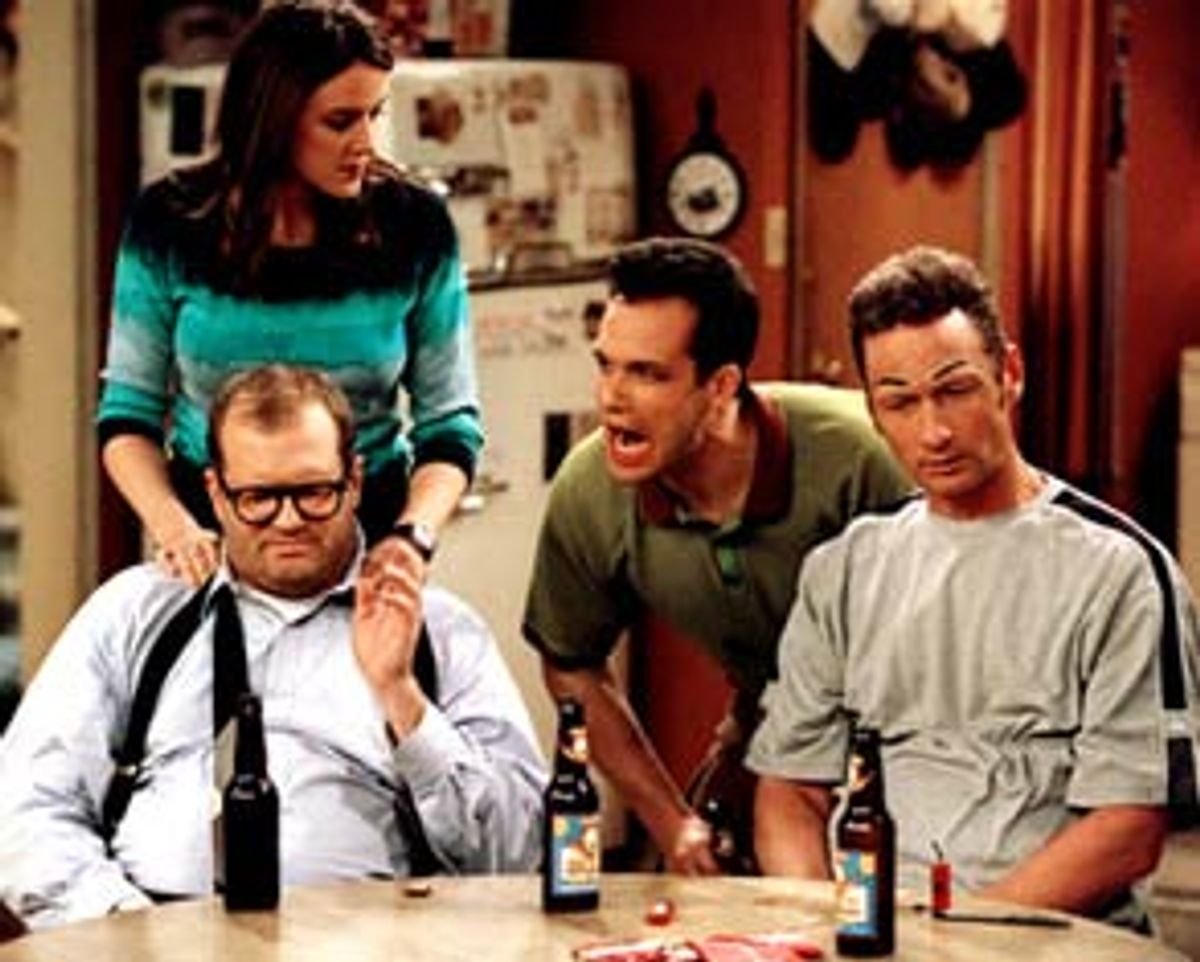 The White House program to financially reward television networks for anti-drug messages embedded in sitcoms and dramas was born in secrecy, achieved stunning midlife notoriety and now has been quietly terminated.

The acting director of the Office of National Drug Control Policy, Edward Jurith, signed a directive May 31 killing the program, first revealed by Salon in January 2000.

Jurith's decision closes a controversial chapter in the government's efforts to combat drug abuse with a pricey advertising campaign. In 1997, Congress appropriated more than $1 billion for an anti-drug advertising effort; it included a "pro bono match" component in which networks agreed to sell their advertising for half-price. Soon, with ad rates going up thanks to the booming economy, networks were looking for creative ways to meet their government obligations, and they agreed to insert anti-drug messages in prime-time shows -- from "ER" to "Drew Carey" to "Smart Guy" -- in exchange for freeing up ad time they could then sell to higher-paying private clients.

The networks earned an estimated $25 million for placing anti-drug and anti-alcohol messages in prime-time programming. Salon's disclosure of the program and its extent sparked angry congressional hearings and negative coverage and editorials in newspapers nationwide.

ONDCP spokeswoman Jennifer DeVallance told Salon that the media campaign staff "just decided we would no longer review programs for content, and we would discontinue the pro bono match."

DeVallance said the recommendation was made to acting director Jurith "after analysis of data collected over two years." She declined to describe the data, as did other ONDCP officials. The media campaign's director, Alan Levitt, refused to talk to Salon.

It is unclear whether the two Republican House subcommittee chairmen with direct funding oversight of the media campaign were aware of the ONDCP's decision. Spokespersons for both Rep. Mark Souder, R-Ind., who chairs the Subcommittee on Criminal Justice, Drug Policy and Human Resources, which authorized funding for the media campaign, and Rep. Ernest Istook Jr., R-Okla., who chairs the Subcommittee on Treasury, Postal Service and General Government, which determined funding levels, declined repeated requests for comment on whether either representative knew the program had been terminated.

Rep. Elijah Cummings, D-Md., ranking Democrat on the drug policy subcommittee, said he felt blind-sided by the decision. Cummings said neither he nor his two top staffers were informed about it. "As the ranking member, for me not to know shows utter disregard for the Democratic Party and myself and my colleagues," he said. Despite the controversy surrounding the program, Cummings said he felt "pretty comfortable" with it. And he believes anti-drug messages in programming are more effective than those in ads. "That's why the change is so upsetting to me -- because I thought it was a creative way to send a clear message," he said. Cummings plans to call for a hearing to investigate why the program was canceled.

Rep. Jan Schakowsky, D-Ill., a member of the drug policy subcommittee who follows drug issues closely, was not informed of the ONDCP's decision by either the White House or the chairman of her subcommittee, according to spokesperson Nadeam Elshami, who said the silence was unusual.

The timing of such a move by acting director Jurith accomplishes several ends for the Bush administration. It is unusual, considering the widely publicized expectation that John Walters would soon be nominated as drug czar, for an acting director to take such a step, though Jurith is a respected career civil servant. But it allows Walters to avoid a potentially messy inaugural decision. The covert propaganda campaign had its champions on Capitol Hill, and Jurith's action saves Walters from having to make enemies early.

But Jurith probably would not have dared to act without Walters' tacit approval. "It's highly unlikely Jurith would have made such a decision without clearing it with the incoming director, " says Keith Stroup of the National Organization for the Reform of Marijuana Laws. "It's possible that Walters asked Jurith to fall on his sword." Longtime drug policy observers say the program's cancellation is more likely the result of frank political calculation than of Bush administration scruples about keeping the media free of government propaganda.

There were questions about how well the program was working and whether it was being fairly administered. In fact, just last week, the Government Accounting Office issued a report on allegations that Ogilvy & Mather, the advertising agency that administered the campaign for the ONDCP, falsified billing records for the program after the contract failed to meet the agency's revenue projections in 1999. The GAO concluded that Ogilvy altered timesheets on 3,100 hours of questionable work billed to the government and also overcharged for contract employees, and that ONDCP failed to rectify obvious billing problems and contract irregularities.

ONDCP spokeswoman DeVallance acknowledged that terminating the program serves to "eliminate misunderstandings." Prior to Jurith's decision a month ago, she said, "some" TV shows received financial credit for government-approved content this television season. She refused to specify which.

Although the ONDCP is within the executive office of the president and reports to Bush, White House spokesman Jimmy Orr referred all questions about the decision to the drug policy office. Democrat Cummings, however, said it was unlikely the decision was made independently of top Bush administration officials. "I don't see how he could make such a significant change without some kind of authority from the White House," he said.

The inspiration to spend tax dollars on anti-drug propaganda came from Clinton drug czar Barry McCaffrey, shortly after the passage of ballot initiatives on medical marijuana in California and Arizona in 1996. McCaffrey considered the medical marijuana initiatives a stalking horse for drug legalization, and he concluded that the government needed its own ad campaign to combat pro-drug messages.

NORML filed a formal complaint with the Federal Communications Commission in February 2000 after the dollars-for-content scheme was disclosed. In December 2000, the FCC issued a ruling chiding the government and directing it to follow the FCC's "concurrent notice" requirements. That is, under the Federal Communications Act, television programs that receive direct or indirect financial incentives have to indicate that fact at the time of broadcast. No fines were imposed, but the FCC did state that "listeners and viewers are entitled to know by whom they are being persuaded."

In the end, the controversy over the scheme hobbled McCaffrey and reduced his effectiveness. "Given the totally negative press and editorializing across the country, McCaffrey was out there alone, and this really weakened him," said Kevin Zeese, president of Common Sense for Drug Policy.

Still, there's little doubt that messages embedded in programming are more effective than overt advertising. Clearly, they stand a somewhat better chance of causing some kid to reject a joint headed his way at a party. That's because viewers enthralled by an emotionally compelling program tend to lower the "defensive screen" that filters out advertising messages, says professor Philip Plamgreen of the University of Kentucky, who helped design and evaluate the ONDCP's media campaign. A message "embedded in a good story line reduces counterarguing because viewers are so wrapped up in the story," Plamgreen told Salon in 1999. "One program segment might have the effectiveness of millions of dollars of paid advertising. [It] doesn't raise defenses in most cases. It's not perceived as someone overtly trying to change your mind."

While paid programming messages are gone for now, the government hasn't entirely given up its efforts to enlist Hollywood in anti-drug efforts. According to New York journalist Preston Peet, the ONDCP currently has an $800,000 deal to run banner ads on 'N Sync's Web site and to feature a filmed ad at each of the 45 shows on the group's current tour. In the filmed ad, group members speak of activities such as mind reading, attending scary movies and even playing tiddlywinks as their own "anti-drugs."

What's more, the federal Centers for Disease Control and Prevention is getting into the act with an annual $300,000 grant available to nonprofit or government agencies to "foster Hollywood leadership support for national public health priorities which include ... promoting accurate depictions of healthy living at all stages of life." Renewable over five years, the aim of CDC program No. 61470 is "coordinating strategic placement of public health storylines and messages in entertainment programming including daytime and prime time television dramas."