Hostesses are offered huge sums for sex, but I know of only one girl who actually went through with it. Sixth in a series. 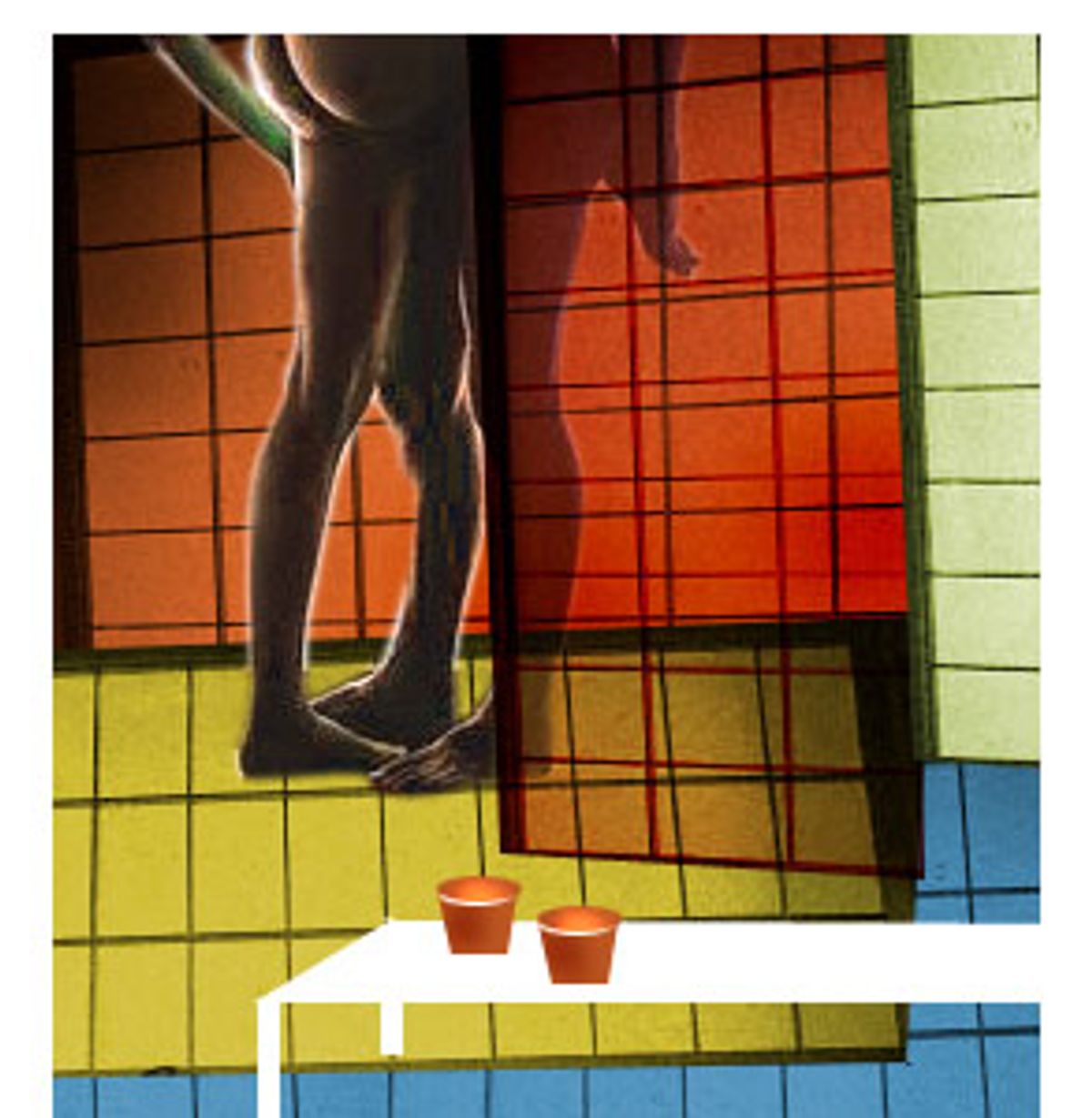 The reason most hostesses refrain from selling sex is far less noble than you might imagine. It's because selling sex is less lucrative, in the long run, than selling companionship. A customer keeps coming to a club because of the 1 percent chance that a hostess may one day give in to his desires. If his desires were satisfied, he might lose interest in her -- that's the risk she'd take. The chase is half the fun for the customer and most of the money for the girl. Besides, why work that hard?

As one former hostess, now a mama-san, put it, "If you're good at what you do, you don't have sex with them. You don't have to."

But, as with love in general, hostessing isn't that simple. Not anymore, at least. For some time now, the geisha has been considered far too expensive for even a moderately wealthy customer. But now hostess clubs like Verdor are also being crossed off the list of budget watchers. Men who could afford it nevertheless whined about the prices at Verdor.

This frugality is a relatively recent development, and it especially affects foreign hostesses. Unlike a decade ago in Japan, postmodern Holly Golightlys can no longer hope to make $1,000 just for showing up for dinner with bleached-blond hair.

The change is the result of altered expectations as much as financial pressures. While Verdor, like the geisha system of old, still stresses the importance of long-term patrons, simpler and cheaper options -- like One Eyed Jack and Harlem Night -- are popping up everywhere. They have an assembly-line hostessing style that aims for short-term satisfaction rather than commitment. After all, why pay $200 per hour for conversation if you can get a peep show -- and more -- for far less? The tastes of the average Japanese consumer are changing, along with his fantasies. If he's going to drop big money, he wants to get all he can -- and I'm not talking about good haiku.

Because of this, the high-class hostess, like her proverbial stepmother the geisha, is becoming a thing of the past. I didn't realize this at first, but it hit me at the same time my fantasy of being a sophisticated but nonsexual companion was finally shattered. I did not want to sell sex; I wanted to sell its most alluring fantasy. But fantasies just aren't enough in Japan these days.

Even in a refined place like Verdor, the men are still men. Highly common is the customer who, though gentlemanly when sober, becomes all hands when drunk. While such behavior is in principle frowned upon at a place like Verdor, it's the hostess's job, rather than the mama-san's or the manager's, to control it, usually by laughing and scolding the customer like a naughty child: "Bad, bad boy." But that tactic sometimes arouses the men even more, since many of them are there to be babied.

Others are sneaky and plot carefully to steal a kiss or a touch from their favorite girl. Sherry, one of my co-workers, realized this too late when her customer took her to O-Daiba, an amusement park on a small island south of Tokyo -- though she was a little suspicious of his urgency to get on the Ferris wheel and his purchase of a bottle of wine with a twist-off cap.

Sure enough, once the Ferris wheel -- one of the tallest in the world, which takes an hour to make one revolution -- started moving, he pounced on her. Sherry knew that she was trapped for the next hour, and he knew it too, so she tried her best to distract him from his groping with frantic conversation. "It was the longest hour of my life," she told me. When I related the story to another customer, he enviously remarked, "What a good idea! Trapped her on the Ferris wheel!" I can guess where he took his next unsuspecting hostess.

I never got stuck on an amusement park ride with a lustful customer, but I did have some problems in taxis. Men who stayed at the club until closing often offered to give me a ride home, and since taxis in Japan cost about four times those in the U.S., I'd usually take them up on their offer. Sometimes they'd invite me to stop for a bite to eat or a drink on the way home. To get out of any side trips, I'd tell them I was really tired or that I had to study the next day.

One night I shared a taxi with one of my most devoted customers, who had been a perfect gentleman so far. When the car stopped at the house I shared with my boyfriend, he grabbed me and kissed me. He was much stronger than I would have thought a 60-year-old could be. I pulled away and ran inside, but I still had to call him the next day to thank him for dinner. He asked me if he could take me to Disneyland in Tokyo that weekend. "I'm not feeling so well," I told him. In fact, I did feel a little sick to my stomach -- I was disappointed in him and in my profession.

An executive at Shiseido cosmetics company had a more straightforward way of getting a kiss or caress from his favorite hostesses: He negotiated with makeup samples. "One kiss, one lipstick. One touch, five lipsticks," he said to me with a straight face.

"Oh, yes. Shiseido is a very good product. Girls like very much. You want?"

In spite of such exchanges, I still held out hope that the elegance of the floating world was alive and well somewhere.

I liked the fact that Verdor's richest customers stopped at geisha clubs in Akasaka before coming to our place. I thought this testified to their cultured tastes. Some proudly sang the old geisha songs they had learned during the time of extravagant patronage.

When I asked one of these men what had made him give up the company of the treasured geisha to come hang out with us, he told me, "If I stayed there any longer I'd get too drunk! Geisha are real alcoholics, and they make you play too many drinking games. And they always win. Here I can relax!"

This man, one of Midori's biggest spenders, had enthroned my friend Sandra and me as his favorites. He was an old hand at being the top client of a hostess club, and he knew how to create a scene if we weren't seated with him as soon as he arrived. He took turns squeezing both of our waists and singing folk songs. Small, dapper and white-haired, he seemed harmless enough, even sweet -- until he started propositioning me.

"You can become my mistress, earn very good money in a short time," he told me.

He repeatedly offered me $20,000 to sleep with him -- a high figure, but not out of line with the sums that get thrown around in such places. Men know that women in the top-notch clubs, particularly North American and Western European hostesses, aren't likely to be won over with a small amount of money. Having been a hostess for several months by this point, I had to admire his realistic attitude. (At least he knew a young woman wasn't going to lust after a man three times her age without some monetary incentive.)

But my final answer every time he broached the subject was "No."

He also made overtures to Sandra, who was a more practical type. "Look, Cynthia, it would be over in about five minutes. Maybe we could even get him to go higher."

"By offering to both sleep with him at once." She was serious about this. The way she described the hypothetical scene with this little snow-haired man was actually pretty comical. But in the end I just couldn't do it. It seemed too absurd -- a grandfather paying two young girls a small fortune for an ephemeral pleasure. This wasn't the dream I wanted to create for this man or anyone else.

Yet the offer did give me a pleasant feeling. I was amused that I could have become a sort of "bodhisattva whore," one of the saintly courtesans famous in Japanese literature for enlightening their paying lovers by teaching them about the instability of love and the human body. Certainly, my powers to empathize had grown since I'd started working in Japan. To be a successful hostess, after all, you have to be a little bit in love with your customers as you sit next to them, paid to smile and flatter and dream in unison. Or you have to be a little drunk.

I talked Sandra out of accepting the big spender's offer for the time being, but when I left Japan, she was again considering his proposal. "To talk about it is one thing; it's another thing to do it," she admitted. She wasn't in desperate need of money, so my guess is that she probably didn't go through with it. But who knows -- stranger things have happened to nice girls in that kind of place.

I know of only one girl at a top hostess club who did exchange sex for money. Amy was a New Zealander who worked for Toni, my friend's Spanish mama-san. Amy kept quiet about her transactions of the flesh. Clearly she was smart, but her careful plans were spoiled when Toni discovered what she was doing.

Toni was furious and felt that Amy's behavior was jeopardizing her business. And it was true that after they got what they wanted, at least two customers stopped coming to the club. (Their sudden departures were what tipped off Toni about Amy's extracurricular activities.)

Toni couldn't afford to lose even one customer. What might have helped Amy in the short term was destructive for Toni's longevity in the business. The hostess, after all, is a metonym of the mama-san, and Amy's behavior reflected badly on Toni. It cheapened her image. Toni fired Amy, and no one seemed to know what happened to her after that.

Unlike Amy, most foreign hostesses walk the fine line between decorative commodity and near prostitute, thinking little of it. Perhaps this is because in Japan -- where foreigners are called "gaijin," meaning "outsiders" -- visitors are already relegated to the margins of society. When you're such a marginal figure, everything is up for grabs.

Next: Addicted to love, but the bad outweighs the good.