Puppets and computer graphics allow haughty felines and lovable canines to battle for control of the universe in this giddy romp. 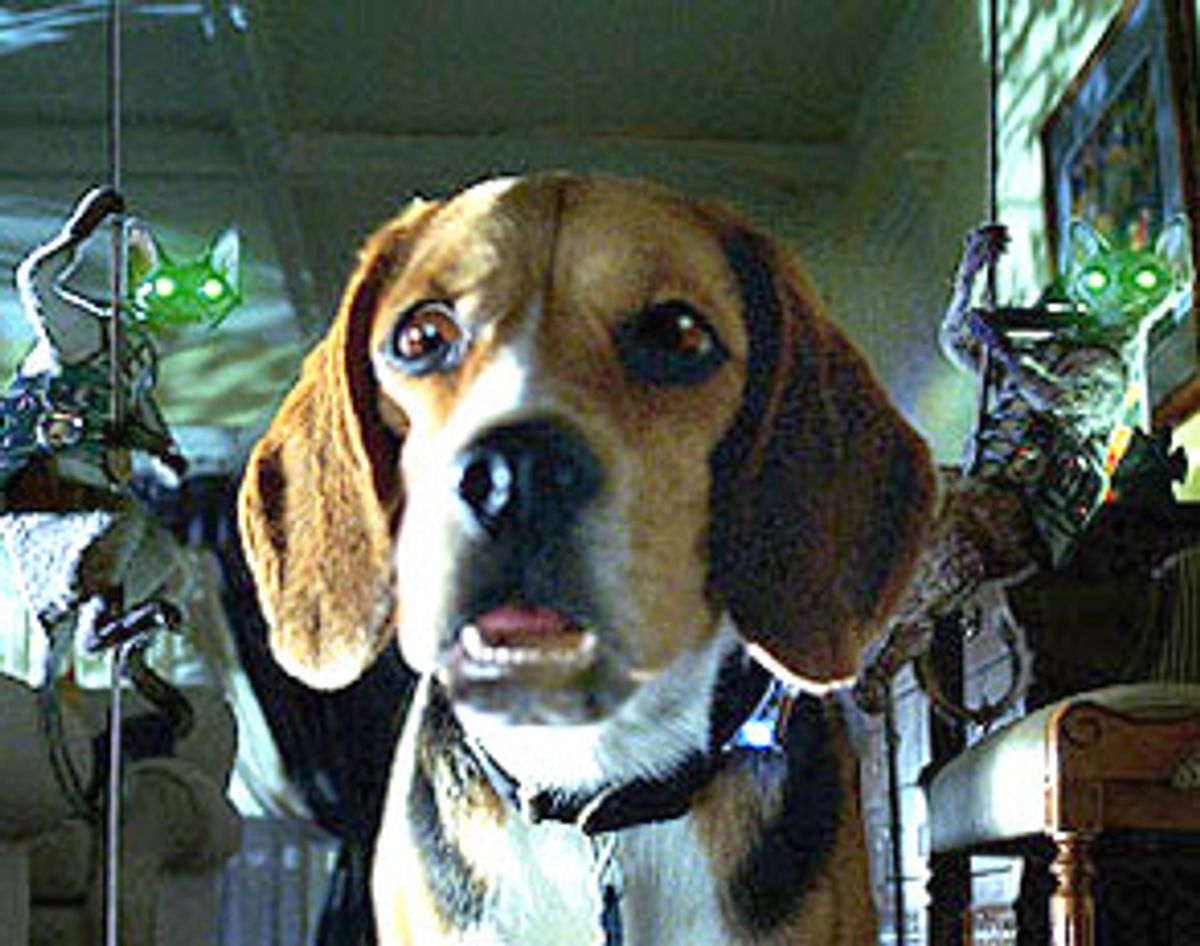 For anyone who has ever dressed a cat in doll clothes -- and here I raise my hand sheepishly, but I swear it was a long time ago -- "Cats & Dogs" is an hour and a half of giddy, ridiculous fun.

We all know we're not supposed to anthropomorphize our pets, but how many of us can resist it? How can we not wonder what's going on inside those furry little heads? Dog lovers know how loyal and true a dog can be. Cat lovers suspect that given the chance, their pets would very much like to take over the universe. "Cats & Dogs" sets up a James Bond-style battle in which talking felines and canines go head-to-head. Most of the fun is in seeing how many gags director Lawrence Guterman and writers John Requa and Glenn Ficara can come up with, riffing on the character traits of our pets that we know in our hearts to be true.

The trouble begins when an underground network of cats led by a perpetually disgruntled-looking Persian -- and have you ever seen a Persian looking any other way? -- named Mr. Tinkles (voiced by Sean Hayes) decides to wage war on the household of a perfectly normal-looking suburban family, the Brodys. The head of the family, Professor Brody, is working on a cure for people who are allergic to dogs. (Jeff Goldblum, who's loaded with nervous charm, plays Brody -- he's like Ichabod Crane with a soul patch -- and should have been given more to do.) When the family dog disappears (note, however, that nothing bad happens to him), Mrs. Brody (Elizabeth Perkins) brings a beagle puppy, Lou (Tobey Maguire), home for their despondent son Scott (Alexander Pollack).

The cats have a vested interest in making sure that Professor Brody doesn't succeed in perfecting his anti-allergy formula: It's explained, you see, that cats were not only worshiped in Ancient Egypt; they ruled it. In the first scuffle between canines and felines, dogs succeeded in overthrowing the cats and restoring human beings to the seat of power, thus becoming humans' right-hand companions and protectors. Cats have been disgruntled ever since.

Explains a lot, doesn't it? So Mr. Tinkles and his crew -- which includes Jon Lovitz as a feisty calico, a squadron of ninja cats with glowing green eyes and a Russian Blue who coughs up lethal furballs -- wage war on the Brody household. Their mission: To effectively declaw Lou, who, fresh from a farm, is still wet behind the ears, as the first step in their plan for world domination. But Lou finds himself unexpectedly drafted into a top-secret canine organization dedicated to fighting feline evil; a gruff shepherd named Butch (Alec Baldwin), an operative for the organization, reluctantly takes him under his paw and turns him into a top dog.

The more ridiculous "Cats & Dogs" gets, the more fun it is. The animals, made to look as if they're talking and moving in most un-animal-like ways with the help of puppets and computer graphics, engage in all kinds of shenanigans. Sometimes they're funniest not when they're talking, but when they're simply responding: There are some early moments when a devious cat teases a bloodhound with his best, most blasé "You've got to be kidding!" look, and the expression is all animal.

Sometimes the action in "Cats & Dogs" is just too frenetic; you get the feeling Guterman thought he might lose his audience if he toned things down too much, but a bit more restraint wouldn't have hurt. And although all of the violence is appropriately cartoonish à la Looney Toons, some of it is just too jarring: Watching a 2-D figure bonk into a wall and slither to the ground is much funnier than seeing a "live" animal do it -- it's instinctual to flinch from the sight of a living animal getting hurt, even if it really is only a puppet stand-in.

But most of "Cats & Dogs" is light enough to be perfectly likable, and a few of the setups are hysterically funny: The always-hilarious Miriam Margolyes shows up as a roly-poly maid in the Mr. Tinkles household, given to dressing his royal crankiness in miniature outfits. ("Evil does not wear a bonnet!" he scowls at one point.) And I thought I was going to have to be carted away at the sight of two cats helping to drive a car, one manning the brake and the other the gas. It just made no sense. Which was precisely why it was so funny.

The cats in "Cats & Dogs" are the bad guys, but they're presented in a way that cat lovers can relate to: It's all about pride, you understand. And the dogs are, well, just plain lovable, particularly Maguire's Lou. Lou is amusing enough when he's gabbling about saving his family or fending off stealthy ninja cats, but he's most wonderful when he's just being what he is naturally, a beagle puppy. With those clumsy old paws and beseeching eyes, he hardly looks equipped to save the world, and yet he does. Filled with innocence, loyalty and unbridled joy, he's the pure essence of dog. It's all well and good that movie magic can make him talk, but it's enough fun just to watch him gambol after a soccer ball.

The lesson of "Cats & Dogs"? Dogs and cats are as different as night and day, and each species must be appreciated for its own special quirks. And cats should by all means be allowed to drive cars. Everyone knows you can't take over the universe without a license.