Cops are not to blame

Who is responsible for the recent killings of blacks in Cincinnati? Liberals and "civil rights" crusaders. 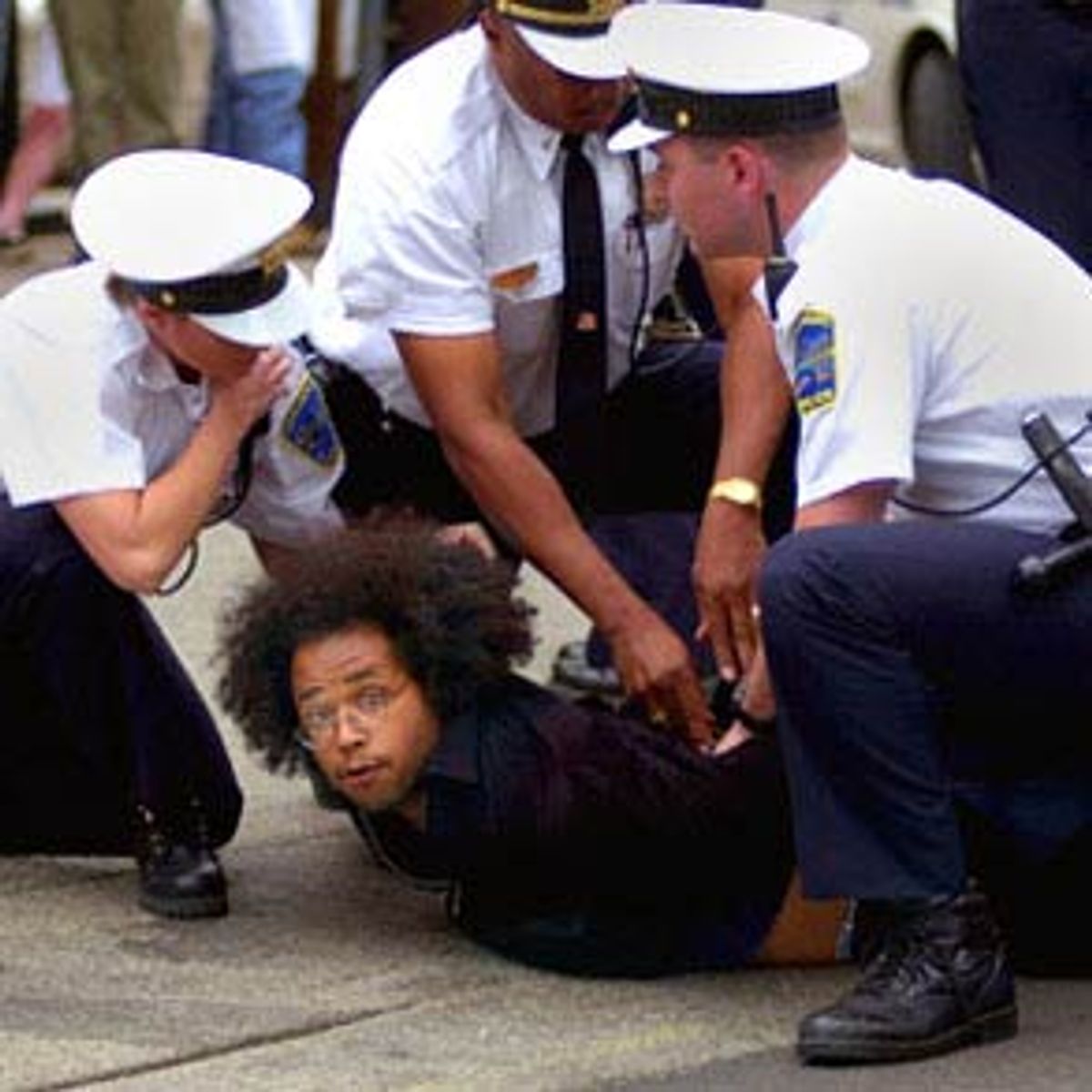 Two days before the Fourth of July holiday, a story appeared in the pages of a major regional newspaper about a series of violent crimes in its impoverished African-American neighborhoods. The story has already made the rounds of conservative media outlets, but like other reports from the real world, which might disturb liberals' sense of their own virtue, it will not travel far beyond the city in question.

The city is Cincinnati, the scene in April of a black race riot of which Cincinnati police and the white population were the targets. The lawless indignation of this event rallied self-appointed champions of "social justice" from coast to coast, as it always does. It was not called a "black race riot" by any self-respecting media institutions. Although white citizens of Cincinnati were dragged from their vehicles and beaten for their skin color, there was scant concern for the "hate crime" aspects of the attacks, to which liberals (in more politically correct situations) normally attend. It was treated, instead, as a black "protest" against "racial profiling" and "police brutality" -- charges both factually contradicted and legally untested, but nevertheless accepted by progressive elites who would not know what to think otherwise. In liberal circles, the Cincinnati race riot was treated as a civil rights "uprising" against white racism, which in liberal gospels is the only possible source of evil afflicting African-Americans.

In response to Cincinnati's riot (and its perceived injustice), all the forces of liberal self-righteousness descended on the city. The usual race hustlers ranted about "civil rights"; the local politicians folded under this moral assault and indicted the police; even the Ashcroft Justice Department piled on with the mob. (After all, how could a man who had been nearly lynched for harboring "pro-slavery" prejudice acquit himself otherwise?) In tediously familiar outlines, the Cincinnati events became another "social justice" charade.

And in that sense, Cincinnati is merely a microcosm of what ails contemporary urban America.

The results of this war are now becoming visible thanks to a recent Cincinnati Enquirer article, which the liberal media has failed to pick up. Under the headline "41 shootings in 10 weeks; all but one of 59 victims were black," the story laid out an underreported story:

In the weeks after the April riots, gunfire crackled at an alarming rate through Over-the-Rhine, West End, Avondale, Bond Hill and other predominantly African-American neighborhoods ... neighborhoods that paid a toll in broken glass and looted buildings during the riots ...

To put the statistics in perspective, understand that last year -- before the race riot and the liberal assault on Cincinnati police -- there were fewer than 10 shootings in the same 10 weeks in these same neighborhoods, where the most vulnerable of Cincinnati's citizens live. A successful riot against police will do wonders to lift the spirits of criminal predators. That is why this year, as the Enquirer reports, "black-on-black shootings noticeably spiked after April 7," the date the anti-law enforcement riot began. Like 19-year-old Timothy Thomas, whose flight from police and consequent death was the incident that actually precipitated the riot, all of the 22 suspects arrested for these shootings are black males.

Now consider the other side of the story. Consider the perspective of an underrepresented party in these events: the law enforcement community in Cincinnati. This community was in the habit of reading Miranda rights to every predator it arrested however calculating and vile his criminal misdeeds. But now it saw itself presumed guilty in front of the entire nation, before evidence of any crime had even been presented. This community had witnessed a swifter indictment lodged against one of its own than that of many of the felons it had pursued. Overnight, and without probable cause, it had become the target of a national lynch mob seeking "justice" from a policeman for the crime of performing his protective duty. In advance of any trial or presentation of the facts, this community could not fail to notice that it had been put in the criminal dock and had no defenders in the national press or even among city officials who were pledged to uphold the law and support the public good.

The reaction of law enforcement is not really difficult to imagine. But no speculation is necessary. A recent newsletter to members of the Cincinnati Fraternal Order of Police contains this warning from its president: "If you want to make 20 traffic stops a shift and chase every dope dealer you see, you go right ahead. Just remember that if something goes wrong, or you make the slightest mistake in that split second, it could result in having your worst nightmare come true for you and your family, and City Hall will sell you out."

Allow me a certain bluntness in interpolating these facts: In Cincinnati, the crusade for social justice conducted by self-righteous race hustlers, myopic idealists and political whores has produced a police force predictably (and sensibly) reluctant to continue enforcing the law at its own unappreciated expense. This has produced an equally predictable crime wave whose mounting roster of victims is -- also predictably -- black.

Days before the Cincinnati Enquirer ran its story, a related feature appeared in the Seattle Times, in whose namesake city another police shooting recently occurred.

Wary of Racism Complaints, Police Look the Other Way

The cops on the street have different names for it: de-policing, selective disengagement, tactical detachment. They even joke about it, calling themselves "tourists in blue."

The reporter describes the new police posture as "passive law enforcement" -- a phenomenon that occurs when officers become reluctant to make preventive "stops," cease to aggressively pursue criminals and only respond to 911 calls. "Many officers, wary of being labeled racists or racial profilers say they hold back or bypass opportunities to make traffic stops or arrests of black suspects."

And why should they, since there's a national campaign to make them the criminals for pursuing such methods? "Racial profiling" -- as defined by an increasingly unprincipled civil rights mafia and a desperate-for-the-black-vote Democratic Party -- means only that more blacks are stopped by police than are represented in the population as a whole. But blacks commit more than 40 percent of the violent crimes in the nation. In other words, the only way to avoid racial profiling (defined this way) is to cut crime prevention by 28 percent, or some roughly similar figure. (Put another way, the crusade against "racial profiling" is a massive liberal denial of the problem of black crime.)

Racial profiling obviously does exist. But like other police abuses, it is committed by individual cops, both black and white. On the other hand, with the exception of rogue officers (who will not appear in the racial profiling statistics that "civil rights" groups are demanding), and except for an occasional rogue precinct, there is no evidence whatsoever that racial profiling is a systemic practice in any police department in the country. Few, if any, reported studies take into account the race of officers making the alleged racial stops (to mention only one problem of current profiling "research"). Without such an inquiry, and by statistics alone, how could one possibly ascertain whether stops are racially motivated?

The idea of racial profiling as a systematic persecution of black males is a myth -- and a dangerous one at that. Yet in the atmosphere of racial hysteria that has been whipped up by the Democratic Party and the "civil rights" left, it would take a brave politician to resist the calls for racial profiling laws, and an even braver politician to stand up for the safety -- and rights -- of citizens who are poor and mainly minorities, and who inhabit the high-crime areas of our inner cities.

In the Seattle story, a black police officer describes the "problem" of racial profiling as "a phantom." He explains the obvious fact that police deployments are made in response to the incidence of crimes. An inexorable sequence follows: The greater the incidence of crimes, the greater the concentration of police, the more contacts with the public, the more potential for "conflict." The more potential, that is, for unscrupulous criminals in the 'hood and their willing political allies to manufacture a racial incident and -- with any luck -- an urban riot.

The young man whose death provided a pretext for the events in Cincinnati had 14 warrants for his arrest and was fleeing 12 officers with drawn guns at the time of his demise. It was reasonable for any responsible law enforcement official to suspect that he was more dangerous than in retrospect he turned out to be (Thomas was unarmed at the time of his killing). Hence the "conflict." In a similar incident in New York, Amadou Diallo was accosted in the dead of night, in a high-crime area, by police responding to a call for help and in pursuit of a vicious rapist. Another "conflict." But it was the inflammatory intervention of demagogic arsonists like Al Sharpton and Jesse Jackson, and the credulous cast of progressives who followed in their wake, that turned this incident into the racial melodrama that left a trail of civic damage in its wake.

Through aggressive policing in the previous seven years, Mayor Rudy Giuliani had made New York safer for blacks who inhabit its high-crime areas than any previous administration on record. Giuliani's methods reduced the number of police shootings of New York citizens by nearly 80 percent, and reduced the criminal homicide rate by two-thirds. Yet the racial demagogues were able to exploit one egregious abuse of police authority in the case of Abner Louima (for which the guilty were quickly prosecuted) and two or three ambiguous ones, and parlay them into a public lynching of Giuliani and the New York police force. By the time liberals were through tarring the mayor as a genocidal racist, opinion polls showed him losing 98.8 percent of the black vote in New York -- a result the devil himself could not surpass. The practical consequence of this racial witch hunt: Recruitment of police in New York City has now become a major law enforcement problem itself. Who is going to suffer as a result?

The war against "racial profiling," which is being zealously prosecuted by every self-worshipping liberal in America, is really a war against poor blacks and other inner city minorities, who are the main targets of violent crime. This war is being conducted by "civil rights" activists and the Democratic Party. It is feebly opposed by Republicans who are themselves under racial attack from the left, and who -- like the police -- cannot see self-benefit in resisting the trend. Why be burned as a racist, when you can go along and get along, and maybe sneak through?

Which leaves the most vulnerable and voiceless members of the African-American community with few to defend them against the predators who roam their mean and dangerous inner-city streets.