"Back When We Were Grownups" by Anne Tyler

The praises this bard of the overlooked sings to the stepped-on, unappreciated nurturers of the world are starting to strike a sour note. 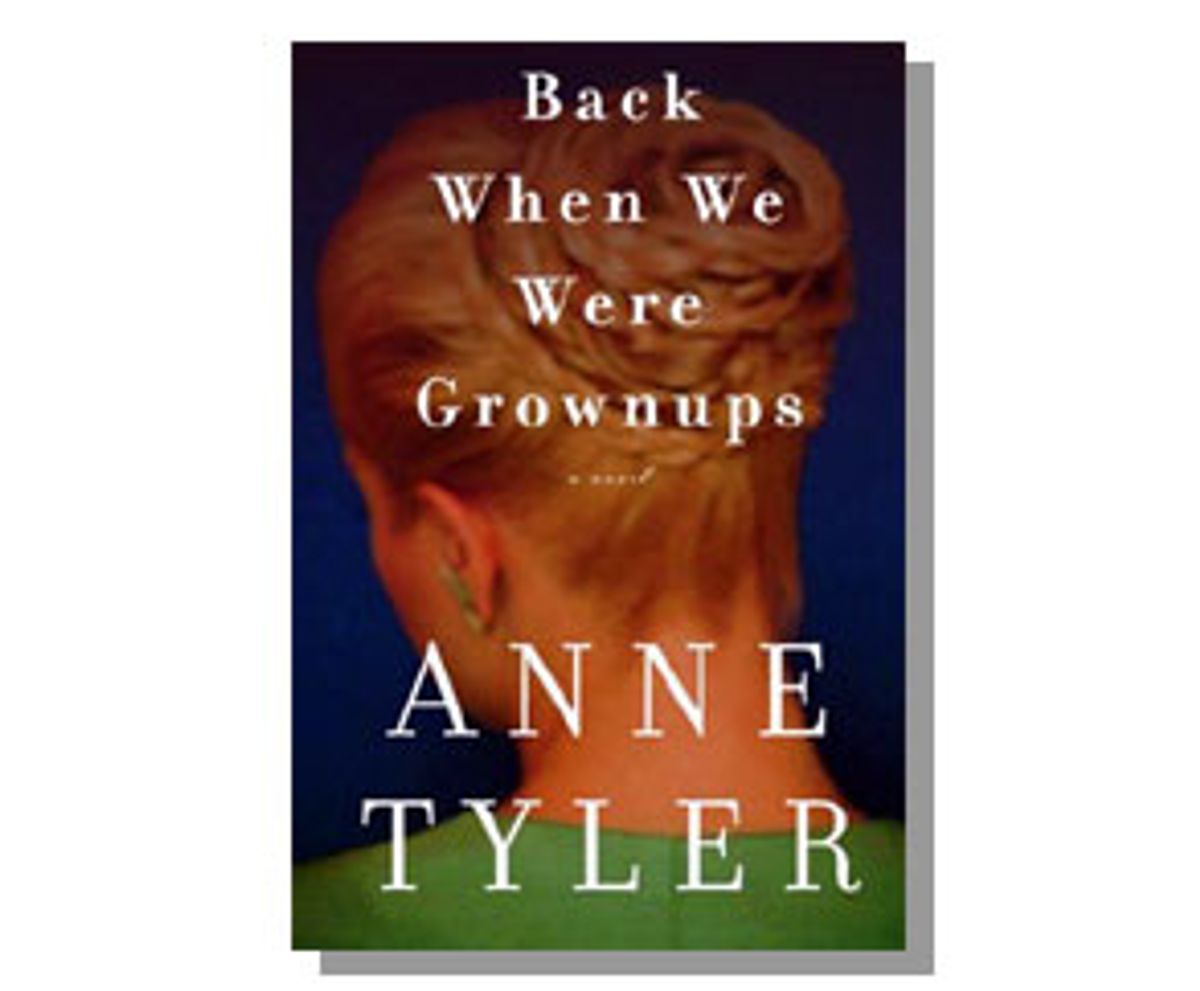 Anne Tyler's fiction is readable the way certain white wines are drinkable: It goes down easy, it delivers a mild, pleasant sensation and it isn't likely to go to your head in any troublesome way. But as I neared the end of Tyler's most recent novel, "Back When We Were Grownups," I realized that, not for the first time, the author was harshing my buzz. As agreeable and as amusing as Tyler's work often is, her books have an annoying tendency to conclude on a distinctly unsatisfying note. In the case of "Back When We Were Grownups," it's downright discordant.

With this novel, as with her somewhat similar 1995 novel, "Ladder of Years," Tyler chooses a disenchanted middle-aged woman as her protagonist. Rebecca Davitch -- a 50-ish widow who presides over the slightly decrepit Baltimore row house and for-rent party venue she inherited when her husband died in a car accident 30 years ago -- wonders if she hasn't lost touch with her "true self." She has raised three stepdaughters and one girl of her own, and has been an unfailing cheerleader for familial conviviality despite the bickering and grumpiness of her recalcitrant clan. She lives with and cares for her husband's uncle, a dotty fellow on the threshold of his 100th birthday. And she has thrown countless parties, flicking from guest to guest, replenishing glasses, making introductions, squelching quarrels, proposing toasts, passing trays, nudging everybody to be a little bit cheerier, a little more festive.

Rebecca's home and business is called "The Open Arms," and it's a quintessentially Tylerian operation -- shabby despite its efforts to present a grand façade, somewhat haphazardly run and fundamentally affectionate and well-meaning. A resolute anti-romantic, Tyler is the champion of such establishments and, of course, the people who resemble them. Rebecca (her family calls her "Beck") is the kind of pleasingly plump, unprepossessing woman who returns from having dinner with the jilted college boyfriend she hasn't seen in decades, looks in her rearview mirror and decides that "her two fans of hair made her look like a Texas longhorn."

The impetus for this meeting is Rebecca's burgeoning sense that her life has "got onto a whole different path," a different path, that is, from the one she followed before she stepped into a ready-made role by marrying a divorcé 13 years her senior with three young children and a large, unruly extended family. She remembers her collegiate self as sedate and orderly, with an interest in historical research. "I never read anymore," she complains to her brother-in-law, "or discuss important issues, or go to cultural events." She begins to regard the life she abandoned as "her true real life ... As opposed to her fake real life, with its tumult of drop-in relatives and party guests and repairmen."

So she takes up with her ex-boyfriend, buys a couple of Robert E. Lee biographies (she'd impressed her history professor with a paper about the Southern general) and halfheartedly tries to convince her family that there's more to her than the "unrelenting jollity" they complain about. Anyone familiar with Tyler's novels knows how all this will end, of course, but those in whom hope of being surprised still springs eternal might want to stop reading here -- it's not possible to evaluate this novel without addressing its ending.

The rekindled romance turns out to be a bust; Rebecca realizes that not only has she lost any scholarly inclinations but she also can't be bothered to read past her horoscope and Dear Abby in the newspaper; and ultimately she embraces her life as she has lived it. At the birthday party she throws for her husband's uncle she watches some old home movies that have been transferred to video, witnesses her own face from years ago, "merry and open and sunlit," and sees "that she really had been having a wonderful time."

Fair enough. After a generation of "you go, girl" novels in which misunderstood, frustrated women jettisoned their families to find themselves, there's something to be said for Tyler's pragmatic embrace of ordinary domesticity and lasting attachments. The honorable midlife task of reevaluating choices made and dreams abandoned all too often degenerates into the embarrassments of tacky sports cars and bimbo girlfriends. So why not sing the praises of self-acceptance and loyalty, of aging gracefully, as Tyler has been doing for years?

Because some lives really do cry out for change, and Rebecca's is one of them. Tyler does such a good job of convincing us of her heroine's unhappiness that the conclusion of "Back When We Were Grownups" just doesn't convince. First, there's Rebecca's family, a pack of unregenerate narcissists who barely acknowledge her existence and have certainly never considered the possibility that she has an inner life. Tyler brings all her writerly brio to this novel's many boisterous, funny party scenes, each meant to convey the message that family life, God love it, is a chaotic, imperfect, but somehow glorious human muddle. This adorable mess, however, conceals some painfully sharp objects, as the occasional blithely unthinking barb directed at the blameless Rebecca demonstrates.

Some of the slights Rebecca endures are meant to be humorous asides about the self-centeredness of children. One of her (grown) stepdaughters, while kvetching about the aggravations in her recent marriage, tells Rebecca, "You don't have the least idea what it's like, being saddled with somebody else's kid when you're basically still on your honeymoon," for example. (The ever-circumspect Rebecca's reply? "Is that so.") But Rebecca's invisibility among these people to whom she has devoted her life goes beyond the occasional thoughtless remark. Perhaps the most piercing example of how little they think of her comes when she's watching that home-movie video and, as the tape ends with a list of mock "cast" credits, she realizes that she's the only family member whose name doesn't appear.

Even if you don't believe that the human spirit craves appreciation for its efforts and shrivels a little every day that they go ignored and unvalued -- even if you think, as Tyler apparently does, that the reward of emotional labor is simply to have done it and that Rebecca doesn't need to get credit (in the case of the video, literally) for what she has created to feel she's had a "wonderful time" -- it's still hard to see this woman as happy. From the beginning of "When We Were Grownups" Rebecca espouses the philosophy that "if you fake a smile, your smile muscles somehow trigger some reaction in the brain and you'll start feeling the way you pretended to feel, happy and relaxed." Hers is a life of bitten tongues, lived by a woman who lies awake fantasizing about what it would be like to say what she thinks.

Like Delia, the heroine of "Ladder of Years," who abruptly deserts her ungrateful family only to return to them a year and a half later when she realizes that the second life she's made for herself is a replica of the first, Rebecca reconciles herself to the idea that, in the words of her step-uncle, "your true life is the one you end up with, whatever it may be." We might fantasize about freeing ourselves of all emotional ties, but our character is our destiny and we will re-create the same shackles all over again. Might as well get used to them; might as well convince yourself that you enjoy them. This is a fatalistic variation of the famous F. Scott Fitzgerald quote about there being no second acts in American life: In Tyler's world, no matter how long you live, it's just the first act over and over again.

This is, when so baldly stated, a depressing vision, and furthermore it's not true, as quite a few middle-aged people quietly prove every day. Even the extremity of the choice, as Tyler frames it, rings false: There's a lot of ground between severing all connections and commitments to others and settling for a life of selfless, thankless and endless giving. And if you have to go so far as to leave your family in order to get a shred of respect, then, really, the experience might do them some good.

I used to think of Tyler as the bard of the world's unsung nurturers -- many of them mothers but not all of them women, by any means -- a novelist who enabled them to discover the dignity and rejoice in the rewards of their chronically uncelebrated lives. But reading "Back When We Were Grownups," I began to suspect that she really writes for those of us who feed off them, for people like Rebecca's selfish children. If it ever crossed their minds to feel bad about having taken so much from her without ever recognizing that she had her own human portion of dreams and desires, then surely they'd find this book ever so reassuring. What a relief to learn that she really had been having a wonderful time after all.