Parents who kill their kids prove that we shouldn't have an automatic right to reproduce. 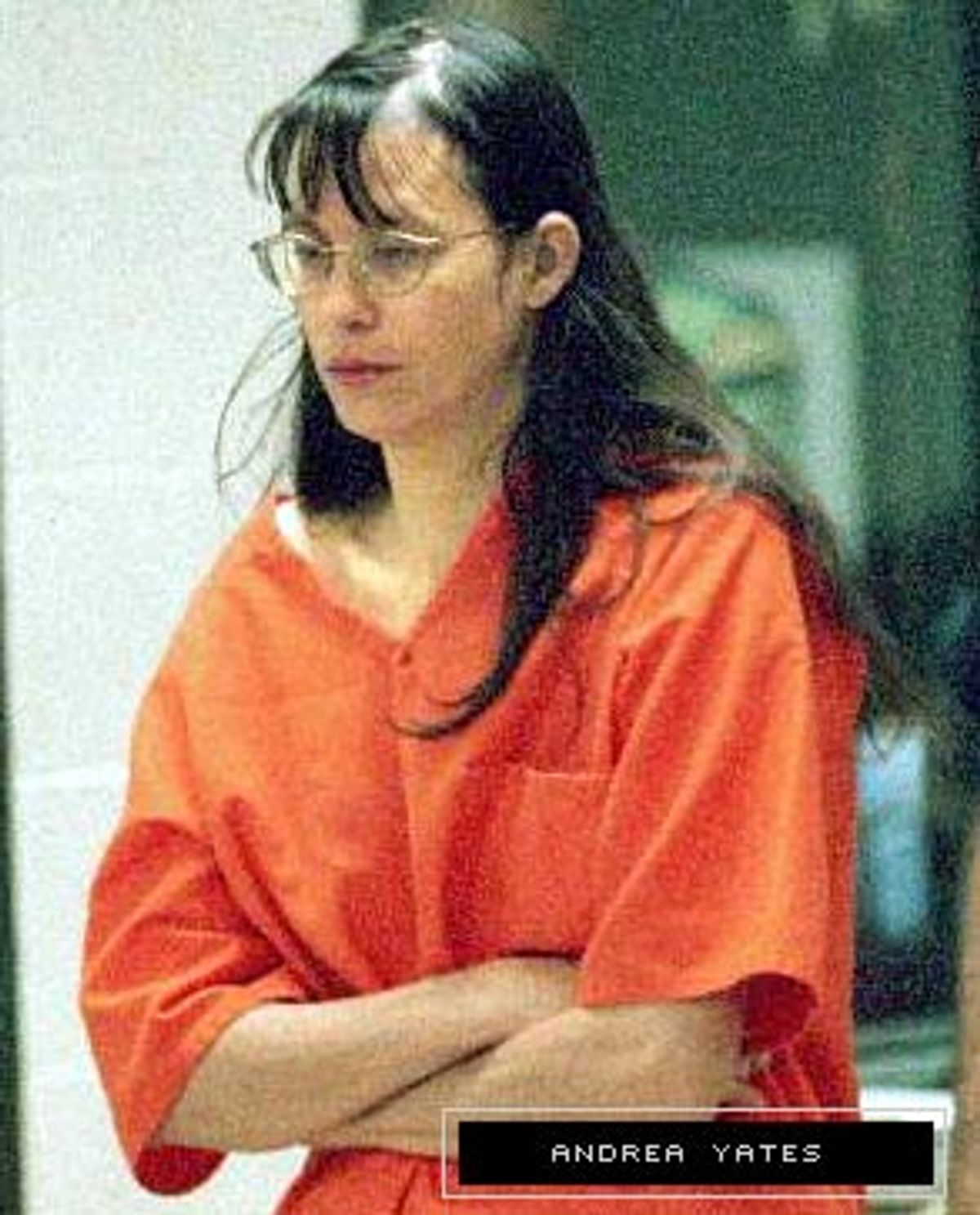 Last week, a father of three was shot and killed by police after he reportedly stabbed his sons for no apparent reason, killing two and leaving one seriously wounded.

This horrible news was made worse by two earlier events: the brutal killing by Andrea Yates of her five children, and the nauseating argument made by Susan Kushner Resnick, in which she defends Yates -- reportedly the victim of postpartum syndrome -- under the guise of moral abstention.

Why are so many compassionate, hand-wringing sentimentalists rushing to the defense of people who should have had their reproductive organs removed years ago?

The Yates murders prompted a friend of mine, a quintessential yuppie juggling fatherhood, a profitable business and a marriage, to send me an e-mail in which he sympathizes deeply with Yates. He claims that we are all walking a thin line between sanity and insanity and that sometimes people kill their kids out of love.

Oh yeah, and you, like the rest of this culture, insist on siding with these solipsistic narcissists called modern-day parents who need a good dose of Critical Thinking 101. In an imperfect world, crucial distinctions have to be made. Most of us, even if we walk a fine line between sanity and insanity, do not kill our children. The difference in our fine line lies in the action itself, not the potentiality.

What happened in Yates' case was a crucial lapse in the judgment of those in her inner circle. Few of us ever have the chance to be prognosticators on such a level; they had it and they blew it. Yates' husband, her family and her friends should all be brought in for questioning and charged with failing to provide this woman with a lifetime of birth control pills. Her husband should be castigated for not considering a vasectomy after the second pregnancy.

I am not a supporter of governmental intrusion into the reproductive lives of human beings, but this tragedy leaves me questioning my deep liberal convictions on many levels. My fondest hope, however, is that this disaster will lead to a national debate on the so-called right to reproduce. We need to probe deeply this absurdly folksy idea that the deep need to have children is simply a call of nature.

Even if it is, so what? Nature beckons us in the direction of a great many urges, such as unbridled rage and anger, reckless sexual licentiousness and gluttony. In the context of our life situations, we judiciously cast many of these callings into the waste bins of depravity where they belong.

Unreflective indulgence into this "need" to reproduce is a narcissistic conceit designed to give meaning to one's life at the expense of innocent children. Oprah is right! Get a dog. It will change your life and, depending on the breed, it need not be too demanding. If it is, you may turn it in to your nearest shelter with a clear conscience and a casual out: "This creature was not what I had in mind."

We have mistakenly taken the allegedly natural human desire to reproduce, which in so many ways is nothing more than old-fashioned tribalism, as a given. It escapes the moral scrutiny of qualifying principles. We do not allow everyone who has a desire to fly a plane, to perform surgery, this automatic freedom. They must satisfy certain conditions and demonstrate competence. They must be qualified. Why? Because, among other things, the consequences of unchecked desires are too great for the rest of us.

"Who are you or I to judge what is a responsible number of children to have?" my friend fires off in his righteous e-mail, smarting, no doubt, from the guilt he feels over whether he has enough bonding time to give his three children. "If five is too many, is three OK? Is one child too many if not raised in a perfect nurturing home?" And on and on he goes, indicting Americans for needing to despise people like Yates.

"Help!" I want to say to someone out there. My conscience as an ethicist pricks me. Do I call some hot line and voice my concern that this average hardworking man may go over the brink soon? He won't go, though. Most people don't; but I will inherit their children in the classroom. As a university professor, I see it all -- grown college students breaking down in my office, sobbing and sobbing. It's all about Mama and Papa and lost love and the evidence that Freud is and has always been right on target.

I am childless by choice and I will remain so, partly because at 36 I feel burned out from taking care of the kids these parents have neglected. When I ask these students why they can't talk to their parents, it's like unlocking a cistern of acidic sour grapes. What comes out is hatred. Kids in America hate their parents! There, I've said it. The ubiquitous chant ("I hate you, I hate you!") of children to their parents means just what it says. No, it's not the unreflective free association of little Billy and his sister subconsciously rehearsing one-liners for a soap opera 20 years down the road.

I think a declaration of war should be made on parents. Don't have more kids than you can afford to nurture and take care of! Who cares about your pathetic need to fulfill something deep inside of you? The problem is that once you eject that child into the world, people like me have to go about cleaning up after your messy needs. Child rearing is like a science; it is a career choice and should be treated as such. If you are not willing to devote everything, and I mean everything, do not have children.

But that's too demanding a condition to make of parents -- I can hear the whining rebuttals. You know what? Life is tough and demanding. Get a grip. A right to give in to the urgings of Mother Nature cannot take moral precedence over the criteria for good stewardship of children, who cannot care for themselves. The crisis in American schools is not about crime or corporate downsizing; it's not even about underpaid teachers. It is a crisis in parenting, which the collective consciousness dares not name because it is too deeply complicit in this state of bankruptcy.

The collapse of serious devotional parenting, which coincides with the rise of families with two working parents, needs to be addressed openly and honestly, once and for all, in a serious nonpartisan manner. This part-time job of parenting has overtaxed our school system, and believe it or not, our universities as well, where teachers are forced to assume the role of surrogate parents and all the problems associated with it.

Hillary Clinton was right. It does take a village. But let us not fool ourselves. The village in any realistic sense is the school, which assists in the socialization process begun by the parent and ensures the continued matriculation of the child into adult life.

But guess what? The village collapsed because it took on more than its fair share and lacked the crucial support of ambitious wannabes who deposited their loads without even thinking: "Gee, how can the village do all these things when I've placed all these restrictions on it, like, don't discipline my child; don't spank his rowdy butt when it needs to be; don't fail him because I'm paying for his education (private or public: I pay my taxes) and hell, I'm not paying for a failing grade; don't demand that he respect you when just last night he threw the cereal in my face; monitor all his playground activities while preparing your lesson plans, if you don't and he falls and scrapes the sheen off his fingernail I'll sue you all?"

These people disgust me. What they want is a moral blank check endorsing their perversions. An individual who is unable to gauge the huge divide between his desires and the means required to achieve them in a healthy way is called a child. An adult who fails to realize this has a cognitive handicap. But an adult who actually executes his or her desires in full knowledge of such circumstances is an unconscionable pervert.

Gays and lesbians, once heroic outlaw souls who bravely took up the responsibility of morally challenging hegemonic notions of conventional sex, family life and relationships, are putting this alleged call of nature into high libidinal drive. They, along with all the other child-hungry breeders, are leading the nation in the multiple-birth craze. Multiple births, once viewed as an exception in nature, are now uncritically accepted as a personal preference and the price of fertility treatment. If you feel the need, buy two, technologically generate three, or four, or even seven. Hey, for your bravery and contribution to the wear and tear on your collapsible uterus we'll throw in tons of free stuff -- diapers, baby food and even a house or two.

The antidotes to this are too numerous to mention. But I have a couple of recommendations to ethically minded people who actually care a great deal about children: From now on, your response to anyone announcing a pregnancy other than their first should be a stern and formidable look. Let the full weight of this gaze fall like apocalyptic brimstone on their gooey-eyed attempts at wonder and innocence. Follow the gaze with the comment: "You have my deepest sympathies," and let the unconcealed moral accountability to which you are holding them reverberate clearly so that your remark sounds more like reproach than condolence.

After the child (or children) is born, send a gift (use your imagination but keep it very respectful), which underscores your initial consternation, along with a note that simply reminds them of the following: The magic of life does not start in utero or during labor or even at conception. Nothing in nature is magical. It can't be. Nature simply is. The magic, or rather the hard dose of realism out of which mature, responsible lives are made, begins in the small, devoted and deeply thought-out steps you take in life to ensure that your playtimes with Nature turn into something stable, healthy and a hell of a lot more significant than 10 fingers and 10 toes.

Tomorrow: The role of psychiatric drugs in the Yates case

Jason D. Hill is professor of philosophy at De Paul University in Chicago and is the author of "Becoming a Cosmopolitan: What it Means to be a Human Being in the New Millennium."