As cable stations and networks chop up classic television shows, viewers are seeing less than ever. 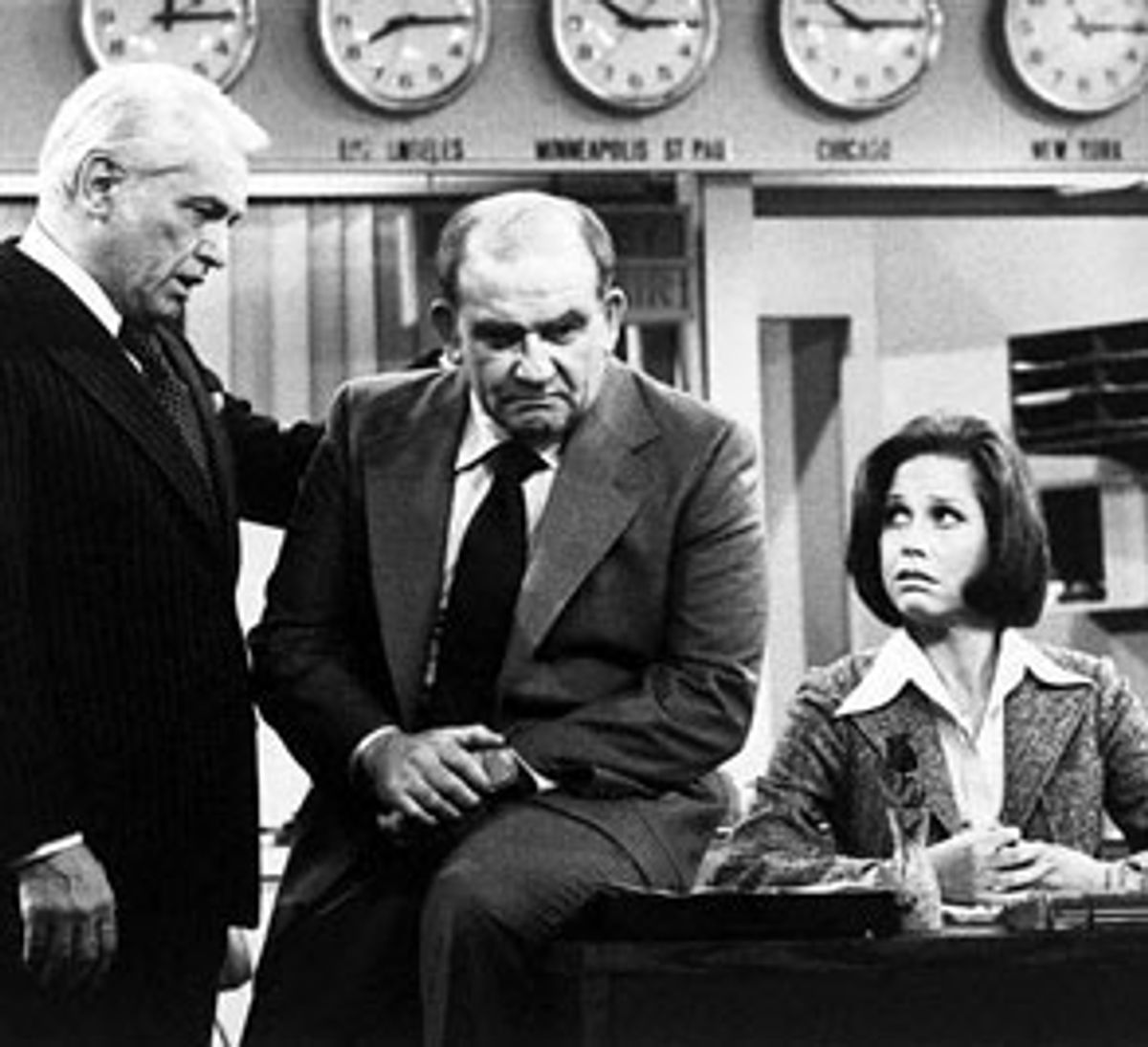 In a "Mary Tyler Moore Show" episode titled "The Dinner Party" there's a famous scene where Mary Richards nervously berates Lou Grant for taking three of the six available portions of food at her latest disastrous party ("Mr. Grant, you've got to put two of those back!"). The scene is often regarded as one of the funniest in the whole series. But if you watched this episode on the cable network TV Land, you didn't see that scene at all; it was cut to make room for more commercials.

That older programs are heavily cut in syndication or on cable is hardly a secret, but it might as well be for all the coverage it gets: TV critics routinely announce the latest acquisition by Nick at Nite or the Sci-Fi Network without bothering to mention, or even check, how heavily it will be edited. Older shows that ran three to six minutes longer than today's shows suffer the most; a 25-minute episode of "Mary Tyler Moore" is usually cut to 21 or 22 minutes in reruns.

Such cuts are bad enough when shows appear in local syndication, but at least there is a legitimate -- if irritating -- reason for such cuts: Local broadcasters depend entirely on advertising for revenue so they need to squeeze in as many commercials as possible. Cable stations, on the other hand, have no such excuse; a good part of their revenue comes directly out of the viewers' pockets in the form of cable fees. So why can't a cable service like TV Land - which calls itself "a network created by TV fans for TV fans" - take shorter commercial breaks and show classic programs as they were meant to be seen?

"The economics of television have changed," says Paul Ward, senior vice president of communications for Nick at Nite and TV Land. "In the old days, a show could have a title sponsor ... and the show could run 28 or 29 minutes, without any commercials."

Ward's explanation fails to account for why Nick at Nite cuts some sitcoms to 20 minutes. Or why Comedy Central cuts "Sports Night," which only ran about 22 minutes per episode in the first place. The way stations work makes it look as if they'll cut anything in syndication no matter how long or short the episodes. In a 1994 Newsday article, a programming executive for TNT summed it up by saying: "Time's gotta come out. That's the key."

As for Nick at Nite and TV Land, every show on their regular schedules is edited in some fashion. There has been one notable exception: Until 1995, Nick at Nite showed "I Love Lucy" in its uncut, 25-minute version. Why did the station start running an edited version? "I can't remember the particulars as to why," Ward says.

Cable networks don't seem to make fewer cuts than local stations that syndicate. Ward says that he hasn't compared the length of programs on cable to programs in syndication, but a quick comparison suggests that cable stations might cut even more. When "WKRP in Cincinnati" ran on Nick at Nite and later on another Viacom-owned network, TNN, viewer complaints mainly focused on the disfiguring music changes - not mentioned by a single newspaper TV critic - but those money-saving changes were made by the distributor and not the broadcasters.

Some cuts were even more gratuitous. In the episode "Les on a Ledge," a farcical subplot grows out of a scene where one character convinces another that Jennifer (the sexy receptionist) used to be a man. This entire four-minute scene, which was intact in older syndicated reruns, was eliminated on TNN, rendering the rest of the episode incomprehensible. The irony is that the syndication versions of shows like "Mary Tyler Moore" and "WKRP in Cincinnati" were in many cases less brutally cut than the versions now seen on cable - which means that viewers are paying extra to see less of their favorite programs.

What takes the place of the material that's been cut? Very often it's promotional spots for the network itself. That means you might be seeing less "I Dream of Jeannie" just to hear that "Gilligan's Island" reruns have moved to a new time slot.

By showing only paid advertisements it would theoretically be possible to make fewer cuts in a program without losing advertising revenue. Is this something Nick at Nite or TV Land would consider? "Probably not," Ward says. "In the cluttered programming environment today, you have a responsibility to brand the network, to let people know what they're watching."

To spread the blame around a bit, it should be noted that cuts aren't invariably the fault of the broadcasters; in some cases, distributors don't even bother to make the uncut version of a show available. For years, Paramount offered only cut versions of many original "Star Trek" episodes (though the uncut versions were usually available on "Trek" videocassettes). But when the uncut series was finally remastered a couple of years ago, and broadcasters could choose between the original and edited versions, it was interesting to note the differences between the Sci-Fi Channel in the United States and its Canadian counterpart, SPACE. For a short time, the Sci-Fi channel did indeed show the uncut "Trek," in a special 90-minute slot filled out with documentary material (and with plenty of "extra" commercial breaks in the middle of acts). A few months later, however, Sci-Fi switched to a version that in some cases was shorter than the old syndication version. SPACE, on the other hand, continues to show uncut episodes of "Trek" every day in a regular one-hour time slot.

Many (though not all) Canadian cable networks show older programs uncut whenever possible. Paul Gratton, vice president and general manager of SPACE, explains: "Canadian viewers tend to be a little fanatical when it comes to editing, especially on cable ... Editing is seen as being akin to censorship on Canadian television, and people perceive that they are paying a premium to access cable programming uncut."

Unlike "Star Trek," most older shows don't get released complete on home video; instead, viewers have to settle for what the broadcasters choose to show. Many viewers, raised on syndication versions of older shows, have no way of knowing how much material has been cut from the shows they're watching, which makes it hard to complain to the cable networks about the cutting of scenes that haven't been shown in years. With relatively few viewer complaints coming in, cable networks have no real need to do anything differently.

It's frustrating that no one even seems to consider the possibility that it doesn't have to be this way. A cable network such as American Movie Classics allows viewers to watch movies without editing or interruption, yet no one has taken the step of creating a similar service for classic television. Why not 24 hours a day of older television programs, in their original, unedited form? Why not an American Television Classics network, dedicated - unlike TV Land - to the proposition that a good television episode deserves to be seen as its creators intended?

There's an episode of "The Mary Tyler Moore Show" where Murray becomes furious upon discovering that the station manager has cut the best joke out of a Marx Brothers movie to make room for more commercials. If cable channels keep slicing out bits and pieces of classic shows, we might not ever see that scene again.

Jaime Weinman is a writer in Nepean, Ontario.