We want to see Julia Roberts and John Cusack together, but this mostly terrible romantic comedy forgets the part where the leads fall in love. 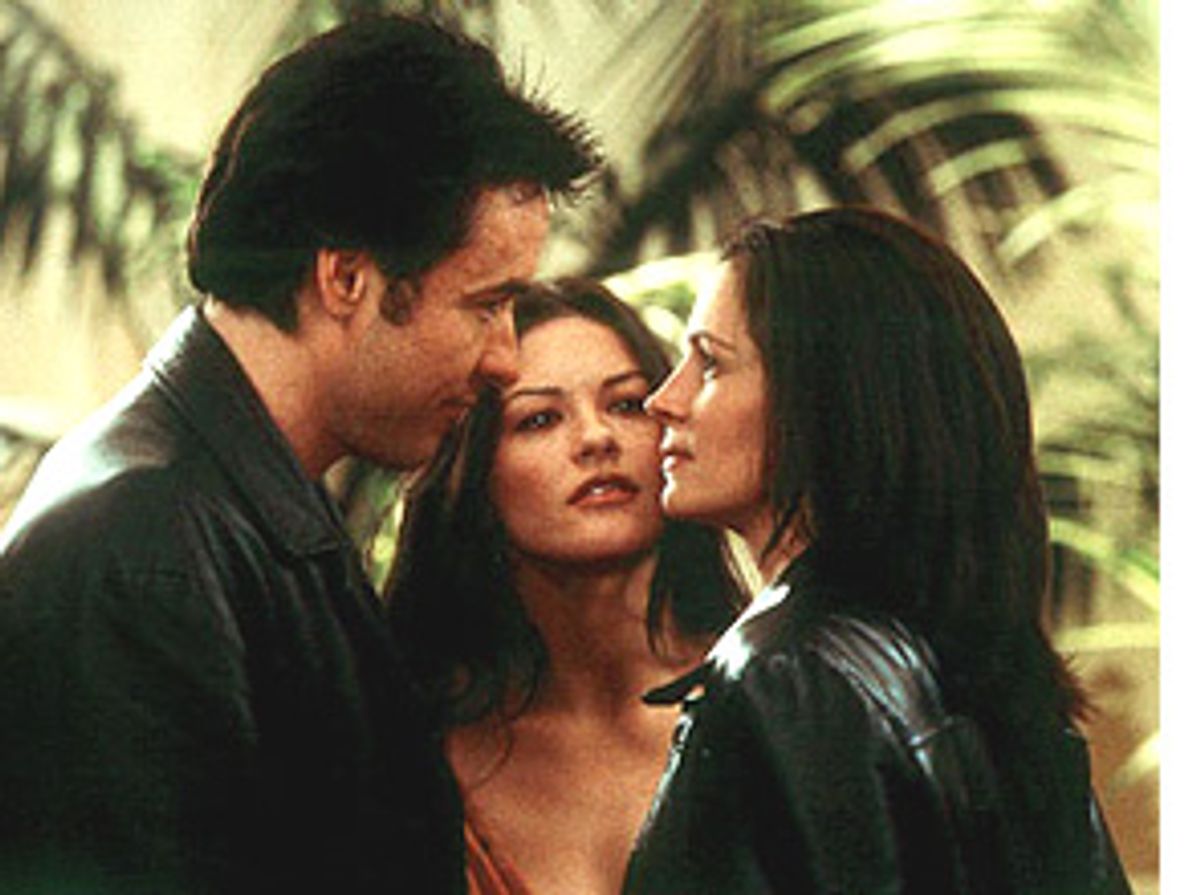 In the great romantic comedies, falling in love is never about abandoning yourself to some fluffy romantic daydream. It's about embarking on a journey that is going to demand meeting one challenge after another, work that can be both hard and painful -- sort of like love itself.

In the classics, like "The Lady Eve," if the pain of love comes through in comedy even more forcefully than it would in drama, it's because it filters out of a stylized, idealistic luxe surrounding. The opening of "The Lady Eve," for example, takes place aboard an ocean liner, a floating art deco playground with Henry Fonda in whites and tans, all primed for a shipboard romance. He finds it, only to have his heart broken by Barbara Stanwyck. In the first sensible thing he does in the whole movie, he heads to the bar and orders straight scotch. It doesn't matter that it's breakfast time, or that it burns all the way down and tastes like gall to him. He doesn't expect to enjoy it.

It's also breakfast time in the new "America's Sweethearts" when Julia Roberts has her heart broken. But instead of heading for the Dewar's, she heads for the breakfast buffet, goes off her diet with sausages and pancakes and waffles, and then gets daintily sick.

It may be unfair to compare "America's Sweethearts," which is just a disappointment, with the greatest romantic comedy ever made. But from the opening shot -- a leatherbound scrapbook with the movie's name engraved in gilt, a shot meant to recall studio movies of the '30s and '40s -- the movie sets itself up for the comparison. And considering what passes for romantic comedy these days, "America's Sweethearts" isn't all that bad. It has a better-than-average cast, a snappy, promising premise and several gifted crazies among the supporting cast.

Yet it's mostly terrible. The movie has no sparkle, no charm, nothing to sweep us off our feet. There are good bits and flashes of real nuttiness -- like the inspired notion of casting Alan Arkin as an Indian guru, his Jewish Everyman shrug transformed into serene Deadheaded acceptance of the universe -- but after a while, I began to resent sitting in my seat like a beggar waiting for crumbs.

The premise of the movie is that Hollywood's leading romantic couple -- both on- and off-screen -- have broken up. Eddie Thomas (John Cusack) and Gwen Harrison (Catherine Zeta-Jones) are megastars who make movies that, to borrow a phrase from Terry Southern, are all smash at the box. But when Gwen dumps Eddie for Hector, a Latin gigolo (whose macho posturings are undermined by Hank Azaria, giving the character a silly little Castilian lisp), and starts making movies on her own, they all tank.

There's one last Eddie and Gwen movie in the can. After releasing a string of flops, the studio head (Stanley Tucci) is banking on it to save his job. He promises the already-fired movie publicist Lee Phillips (Billy Crystal, who co-wrote the script with Peter Tolan) that he'll give him his job back if he can, during the movie's upcoming press junket, convince the public that Eddie and Gwen have gotten back together. The people will go see it, he figures, if they think Gwen and Eddie are in love again.

There are hitches. The picture's mad-genius director (Christopher Walken, in a long salt-and-pepper wig and Hollywood hippie duds) has hijacked the film and refuses to let anyone see it before the junket screening. And on the junket, love-struck Eddie, who's been at a "wellness center" for several months because he hasn't gotten over Gwen, suddenly falls for Kiki (Julia Roberts), Gwen's sister, personal assistant and gofer.

Or at least that's what we're told happens. The problem is, we never see Eddie and Kiki falling in love. There's a flashback with Eddie drunkenly kissing Kiki, who was 60 pounds heavier at the time. It seems meant to convey the first inklings of romance, though it doesn't read as anything more than a clumsy pass. And when Eddie sees the newly svelte Kiki, he greets her affectionately like an old friend -- there's no desire. That's what characterizes all of Cusack and Roberts' scenes together: We never see longing or even buried attraction. It may be that they haven't been given the scenes to develop it, but there's no chemistry between them.

The cuckolded Eddie knows that Gwen is a snake wooing him here for the good of her career, but that doesn't translate into his realizing that Kiki is the woman for him. There's a good bit the morning after Eddie and Kiki spend the night together and murmur endearments with a blanket held over their mouths to protect each other from morning breath. But the movie is so coy that there's no telling whether they've actually had sex. (They're both in T-shirts and bottoms.)

Cusack and Roberts and Zeta-Jones have been given sketches for characters instead of characters. Eddie is the volatile "coming apart at the seams" star (he drove a motorcycle through the window of a restaurant where Gwen and Hector were eating); Gwen is the narcissist who manipulates people by playing helpless; and Kiki is the loyal drudge who's getting sick of her position. The movie wisely stays away from the pop psych of Kiki's self-esteem issues, and the role is a potentially promising one for Roberts, giving her a chance to recapture the gangling awkwardness that won over audiences by making them feel protective of her when she first became a star. But none of the three leads really has a role to play.

Cusack saves himself with his offhand professionalism and the enormous audience goodwill he has built up. Some of Zeta-Jones' initial whining is very funny, and she has a great moment when Eddie and Hector -- who, with his lisp, calls him "pus-thee boy" -- have a public fight over her and she flashes the thrilled, full-of-herself smile of a prom queen. But she doesn't have the command or the presence to carry off being a glamorous bitch queen. We should hate Gwen so much we love hating her; as it is, she's merely an annoyance.

The movie takes place over the course of the junket weekend, and in the production notes the director, Joe Roth, says, "I like a movie with a clock." Well, I like a movie with some sense of pacing, and "America's Sweethearts" limps along from one bit to the next and basically goes to sleep during the expository scenes. Roth brings all the complications together in what is supposed to be the explosive scene when the new Gwen and Eddie movie is finally screened for the press, but everything resolves itself in a soft little nothing of a climax.

And there's a bigger problem. Crystal and Tolan and Roth (who used to be the head of Disney Studios) want the film to be not just a romantic comedy but a showbiz satire on how ruthless the studios can be to sell a picture. Hollywood satire is nothing new. Audiences have always loved jokes about the machinations of studios and the vanity of stars. And catering to that love has produced some terrific comedies, like the 1928 silent "Show People" starring the delightful Marion Davies, the 1932 Jean Harlow vehicle "Bombshell" and "Singin' in the Rain" (echoed in the climax of "America's Sweethearts").

But today, in an age of shows like "E! True Hollywood Story" and Monday box-office reports (something that used to be confined to trade magazines like Variety), audiences are more savvy than ever about how stars use the media and how movies are sold to them. At this point, making jokes about egotistical stars and desperate, lying publicists seems more like a way of flattering audience members' sense of their own hipness by telling them what they already know. And, of course, it's a way for the filmmakers and studio execs to make a big show of being able to laugh at themselves. The movie gets laughs off the inane questions of junket whores (the press), but the laughs are hollow: You can imagine the people who are being ridiculed watching "America's Sweethearts" and being pleased that a Hollywood movie has deigned to acknowledge them.

There is one bit of true satire, when Stanley Tucci's studio chief muses about what business the new Eddie and Gwen movie might do if the heartsick Eddie committed suicide at the premiere. That's too harsh a joke for a romantic comedy, but at least it shows an awareness that today showbiz satire has to draw blood in order to work. "America's Sweethearts" is part of the mealy-mouthed approach it claims to be sending up. Nothing in it is as good a piece of satire as the line in the production notes describing Crystal as "a dedicated human-rights activist" or the current news story about Lizzie Grubman, the publicist who ran down 16 people driving out of a Hamptons nightclub in a huff. (There are some publicists whom an Islamic jihad wouldn't mess with.) Only in Hollywood would you get a satire of showbiz mendacity from the same studio (Columbia) that brought us invented critic "David Manning," or put its own African-American employees in ads shilling for "The Patriot."

It's not as if romance is dead in Hollywood movies, though sometimes I think it's most alive in teen movies like "Save the Last Dance" and "Crazy/Beautiful." Lately, though, you have to look elsewhere to find the spirit of romantic comedy that Hollywood once minted fresh in movie after movie. It existed in last year's French movie "Girl on the Bridge." And it exists in the work of British director David Kane, which American audiences have not yet gotten a chance to see. His 1999 ensemble comedy "This Year's Love" is both tender and tough-minded, charming without being coy, observational without resorting to mushy pop psychology. His follow-up, "Born Romantic," has not been picked up for American release.

I'd be very surprised if audiences weren't excited about the prospect of seeing a romantic comedy with Cusack and Roberts. It isn't that the talent to make great romantic comedies no longer exists -- I'm just not sure if the will still does. But part of the excitement of a Roberts-Cusack romantic comedy is simply the part that the genre still plays for moviegoers. We'd still love to see the casual sophistication and cheerful cynicism of those great films of the '30s -- movies that knew audiences didn't need to be coddled, and that they were thick-skinned enough to appreciate the wised-up attitude of sharp writing and witty stars. Is it so hard to make movies that give love its proper due?