Jon Favreau and Vince Vaughn as low-rent criminals don't have the "Swingers" snazz, but this modest picture is a better movie. 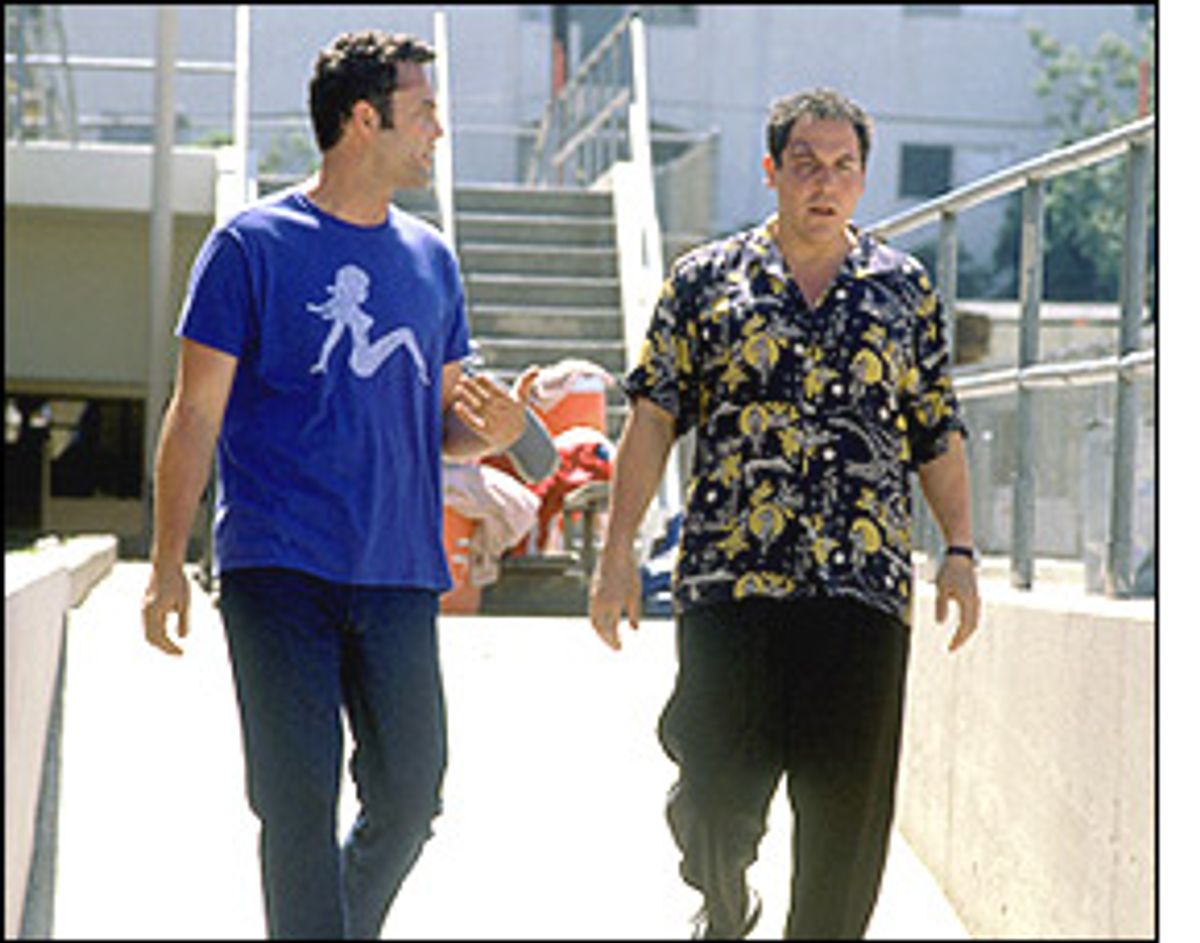 "Made," the directorial debut of "Swingers" writer and star Jon Favreau, has a loose, sidewinding, vaguely woozy feel. It swaggers more than it swings. Fans of "Swingers" may be disappointed. "Made" doesn't give us as many jazzy catchphrases to latch onto, or figuratively hoist us aloft on a giant martini glass of prolonged adolescence. But then that's precisely why it's the better movie. It's much less saturated with its own gimmickry. The real focus here is on the actors, Favreau and his "Swingers" costar, Vince Vaughn. And even though "Made" moves along in fits and starts -- the script, written by Favreau, seems to exist mostly to give the two actors lines to bounce against each other -- Vaughn and Favreau almost always give us something to watch.

Favreau's Bobby is an aspiring Los Angeles boxer who wishes he could make more money so his girlfriend, Jessica (Famke Janssen, a dazzler who has too little screen time here), will no longer have to work as a stripper to support herself and her young daughter, Chloe (Makenzie Vega). Bobby does odd jobs for club owner and jack-of-all-trades Max (Peter Falk, in a gleefully grizzled tough-guy performance), who is also Jessica's boss.

Max has his fingers in many pots. In addition to the club, he runs construction and carpet-cleaning businesses, in which he employs Bobby and Bobby's hotheaded, teddy-bear thuggish, not terribly bright best friend, Ricky (Vaughn), to whom Bobby is indebted for some youthful act of bravery that saved his life. Max decides to do Bobby a favor and send him to New York on an unspecified but obviously shady job; Bobby begs him to cut Ricky in on the deal. The two of them head east, where they eventually hook up with their appointed contact, the freezingly cool Ruiz (Sean "Puff Daddy" Combs, who makes a reasonably convincing underworld operative, and only half looks as if he's playing himself).

Bobby, short-fused but earnest, has his head on straight; it's Ricky who threatens to turn the trip into a nightmare, starting even before their plane takes off. He summons the flight attendant six times, each time asking her progressively ruder questions until she threatens to have him thrown off the plane, and still he acts convinced that her annoyance is her issue and not his. What's her problem with rounding up a few more "honeys" from the plane for a little party in New York?

The rest of "Made" is a constant reembroidering of that pattern, with Bobby trying to keep Ricky in line so the job won't get bungled and Ricky swirling around in tight little circles of maddening behavior. Ricky acts as if he knows it all, but he's really howlingly clueless. He jauntily asks one of Ruiz's beefy henchmen if he's "strapped," to which the guy responds, with an incredulous glare, "What's up with this '21 Jump Street' stuff, man?" He squanders the per diem Max has given him, peeling bills off his wad and handing them over to a cocktail waitress: "Here's a hundred bucks just in case I get drunk and call you a bitch later," he tells her with a meltingly ingratiating smile.

Vaughn carries off the character well, but a little goes a long way. Favreau's Bobby, as he's played and written, is much more low-key and likable, and too often he just sits back and rolls his eyes at Ricky when he should jump in and set him straight. You get the sense that Ricky was a much more fun character to write, which may be why Favreau gives Bobby short shrift.

Still, while Favreau is a reasonably lively writer and a yet-untested director (albeit one with potential), he has already proved himself an immensely appealing actor. In Valerie Breiman's romantic comedy "Love and Sex" he played a grumbly, obnoxious boyfriend harboring an inescapably decent nature. It was the kind of character that stuck with you long after you forgot the plot details.

His character here has less definition; he's a sturdy, reliable structure against which Ricky can bounce his relentless shenanigans. Even so, Favreau turns in a performance with lots of subtle curves and angles. Rustling up a fast supper for Chloe (he's more attentive to her than her mother is, even though he's not her real father), he asks her if she knows what pasta puttanesca is. "It means bad girl pasta," he says authoritatively, swirling some oil in the pot, playing the part of the protective dad who knows the world is a rough place, but also sometimes a fun one. Favreau collapses the depth of the relationship between the two characters into that one little shared joke: It's economical and complete. It takes a bright actor to do so much in so little space. As you're watching "Made," you can see Vaughn running off with the movie frame by frame. In the spaces between, though, it's Favreau who's stealing it.