Bush's prayers are answered, for now

A day after GOP moderates delayed it, faith-based legislation passes the House. 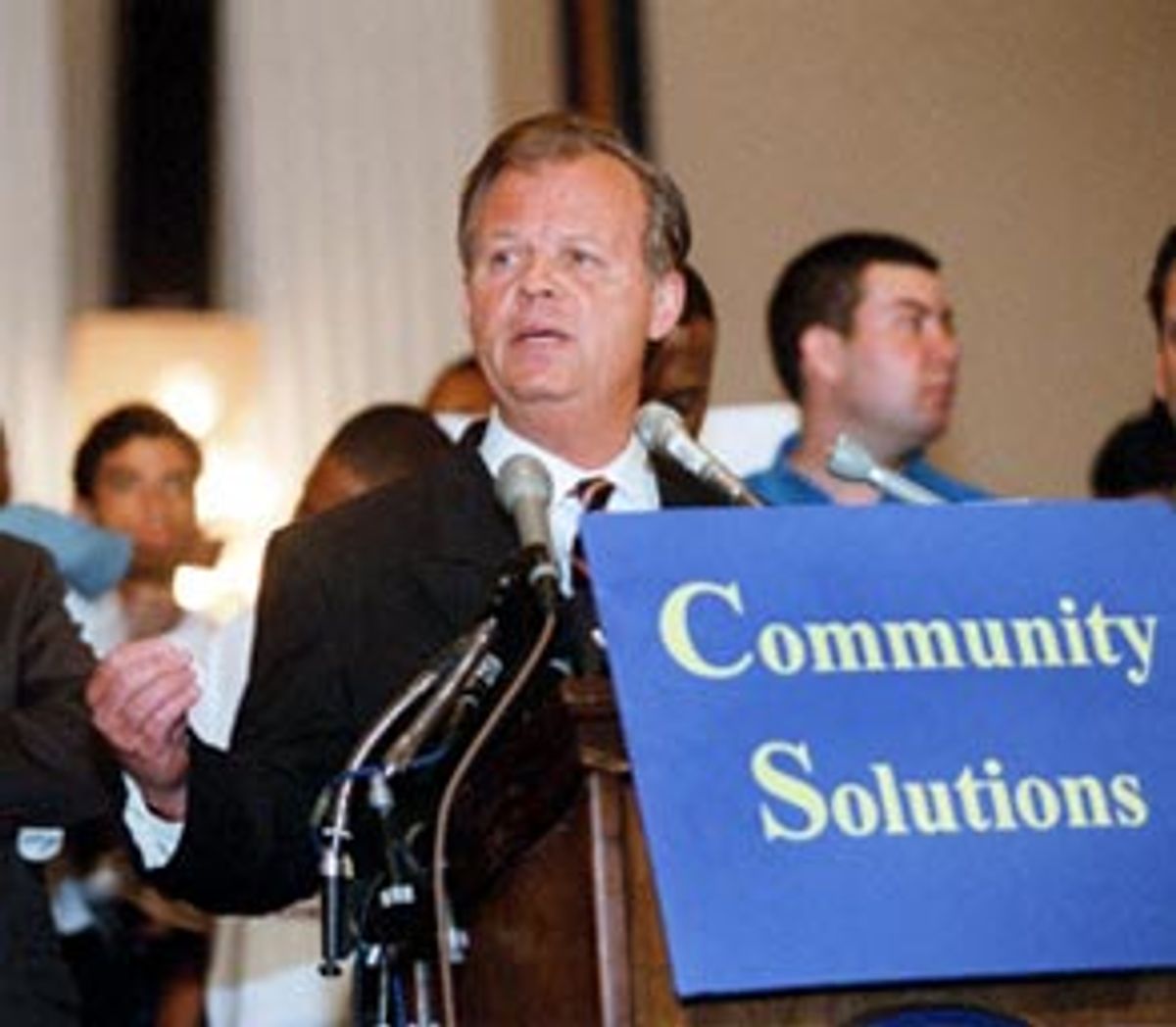 President Bush's faith-based initiative, temporarily derailed Wednesday, sailed through the House of Representatives just one day later, as smoothly and calmly as baby Moses' raft on the Nile, winning 233-198, with the support of 15 Democrats and all but four Republicans.

The bill, sponsored by Reps. J.C. Watts, R-Okla., and Tony Hall, D-Ohio, will encourage donations to religious charities through the tax code, and will let such groups compete for federal dollars. It was momentarily held up on Wednesday when Rep. Mark Foley, R-Fla., led a small team of GOP moderates to protest a provision that extends to publicly funded religious charities the same exemption from the religious aspect of the 1964 Civil Rights Act that religious organizations have.

Foley's problem with the bill lies in the fact that it would let federally funded religious charities discriminate against, say, Jews or gays when making employment decisions for secular positions in the charity. And even if a state or locality had nondiscrimination laws in place, the religious charity would be exempted from those laws. Foley tried to offer an amendment to the bill to change this, but the GOP leadership blocked it.

Foley's concerns were enough to derail a vote on the bill for a day. But by Wednesday evening, John Feehery, the spokesman for House Speaker Dennis Hastert, R-Ill., was saying that the bill -- unchanged -- would face a vote Thursday. "We'll win," Feehery predicted -- correctly.

Wednesday evening, Foley said 30 to 40 Republicans had expressed concern about the bill's overriding of state and local laws. But then the GOP arm-twisting began, he said, and support for his argument quickly crumbled. A safe estimate of Republicans standing with him was probably closer to 15, he said. Feehery disagreed. "Closer to five," he said.

Again, by the time of the final vote at least, Feehery was right: The only four GOP opponents were Reps. Ron Paul of Texas, Don Manzullo of Illinois, Connie Morella of Maryland and Bob Stump of Arizona. Even Foley voted for the bill, as did Rep. Christopher Shays, a thorn in the side of House GOP leadership especially since Hastert refused to move his campaign finance reform bill to the full House last week.

Rep. Jim Kolbe, R-Ariz., the only openly gay Republican in the House, voted for the Watts-Hall bill, encouraged to do so by Deputy Whip Rep. Roy Blunt, R-Mo., in a meeting right before the vote.

"Negotiations" between Hastert's and Foley's offices began on Wednesday, but Foley's office considered the offers from the speaker to be meaningless. Hastert said he'd let Foley bring up his amendment for a subsequent appropriations bill, which he would be permitted to do anyway, and he offered a moment of floor time for a "colloquy," wherein Foley and one of the bill's sponsors could have a dialogue about the matter. Foley was so disappointed, he didn't even participate in the colloquy. The task fell to Rep. Mark Kirk, R-Ill., who ended up voting for the Watts-Hall bill, too.

"Obviously, they worked their will," said Shays. "And they didn't know how the Democrats were going to vote." In the end, Shays voted for the bill because he supports it in principle, and trusts that the moderates' concerns will get addressed when the Democratic-controlled Senate takes up its version of the bill.

Despite impassioned appeals by Minority Leader Rep. Dick Gephardt, D-Mo., Democrats failed to gel behind any effective counter to the bill. The Democratic alternative to the Watts-Hall bill was defeated 168-261, with 40 Democrats voting against it.

A motion to send Watts-Hall back to the House Judiciary Committee, where the Foley amendment could be added to it was defeated 234-195, with Foley, joined by Morella, Rep. Jim Leach of Iowa and Shays, as the only Republicans voting for it. Seventeen Democrats voted against it.

Throughout the debate, passions ran high. Supporters of the bill argued that too often politicians refuse to give religion the respect it deserves.

"We dismiss and we discourage people of faith," said co-sponsor Hall, speaking in particular to his fellow Democrats.

"What ever happened to states' rights?" asked Rep. William Delahunt, D-Mass., invoking what has been a time-honored Republican value. During the debate over the Contract With America in 1995, "you spoke so clearly about local control," Delahunt said to his Republican colleagues. "It seems to have been discarded."

"Faith-based organizations should have an opportunity to compete on a level playing field," Watts countered. The individuals who work "12-hour days" at these groups "don't get their names in the paper," but they and their works deserve support, he said.

While some of the bill's supporters promised that language permitting certain types of discrimination could be removed during the House-Senate conference committee, Rep. Barney Frank, D-Mass., an openly gay opponent of the bill, quipped, "I thought it was 'faith' in God, not 'faith' in the Senate!" But despite the unanimous opposition of the 34-member Congressional Black Caucus -- somewhat surprising in light of the support Bush's faith-based proposals enjoy among many black clergy -- the bill passed with a strong 35-vote margin of victory.

In London, President Bush issued a statement. "Back at home, Congress has taken an important step toward building stronger and more caring communities," he said. "In a victory for progress and compassion, the House has acted to expand charitable giving, to increase the help available to poor Americans, and to end discrimination against churches, synagogues, and charities that provide social services."

But from Foley's point of view, it's the discrimination permitted by the bill that will get the headlines, which he sees as the result of GOP cluelessness. Still, as is his M.O., he put forth his best Republican face for the crowds and supported the Watts-Hall bill in its final vote, saying that it "will fill a vital role in our society and give faith-based organizations the tools to provide much-needed services to those who need them most ... My concerns arose from the unintended consequences this bill could have by potentially overriding state and local laws aimed to prevent discrimination based on disability, gender, religion, race and sexual orientation, among others."

"We have made great progress" in addressing these concerns, Foley said. "Our proposal has not fallen on deaf ears, and we are confident we can work to include many of the provisions we have advocated in a conference report on this bill."

His confidence is actually not so ill-placed. After all, the odds are that the issue will be resolved to Foley's liking in the Democratic-controlled Senate.

"We can't move backward on the progress we've made on discrimination in this country," Majority Leader Sen. Tom Daschle, D-S.D., told reporters Thursday when asked about the dispute in the House. "You know, we are becoming a more tolerant society, sometimes in a very difficult manner. We've been kicking and screaming in our resistance as a society at times, but we've done it because we've been mandated to do it. Those mandates have made a difference."

Throughout the day, as the debate raged, the House and Senate were visited by random troops of Boy Scouts, attacked by many for discriminating against gays, in town from all over the country for the annual Boy Scout Jamboree -- a reminder of what's at stake in this debate and how little common ground the two sides may find.