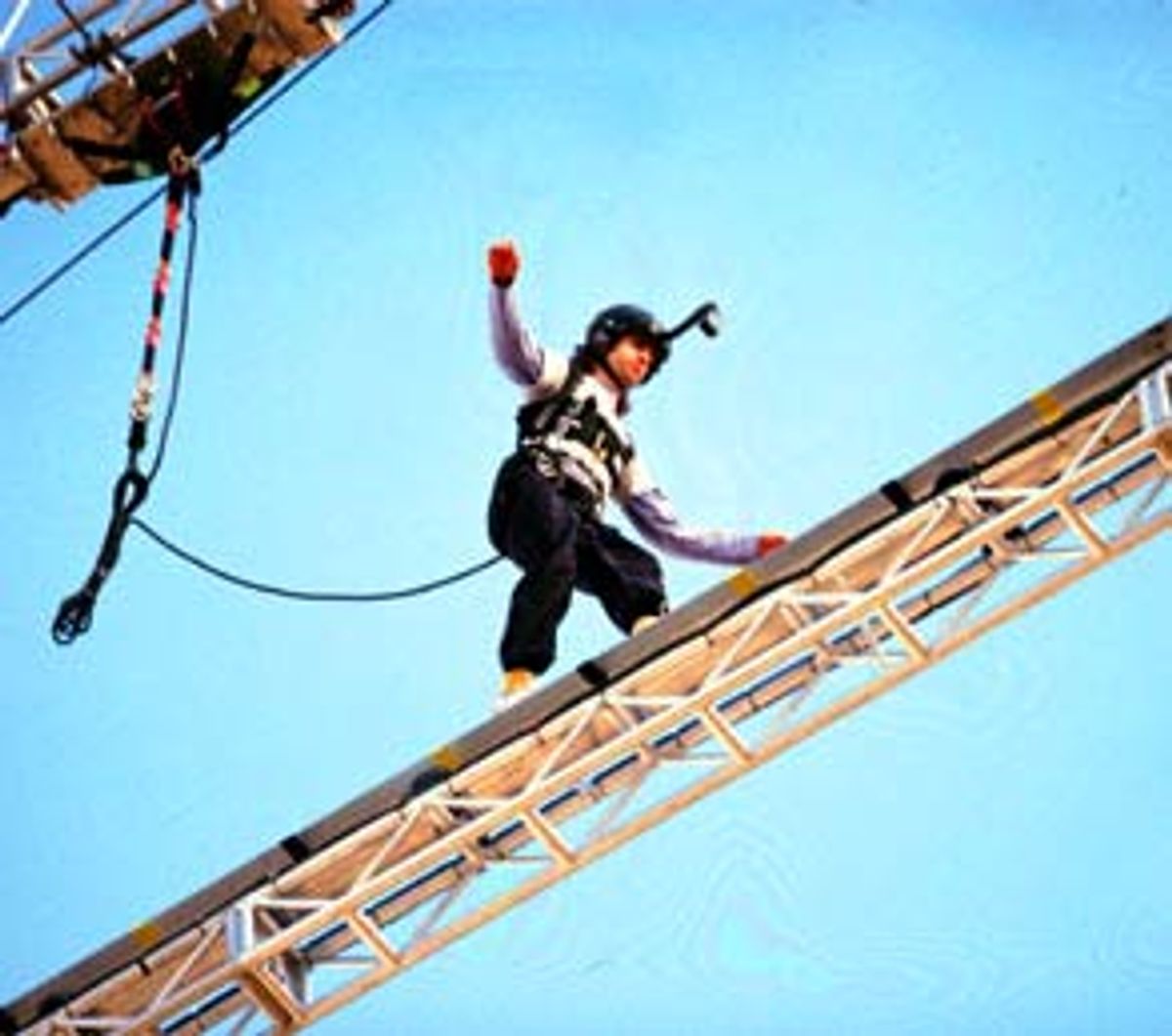 To quote that prescient big '80s trio Bananarama, it's a cruel, cruel summer -- especially if you've been watching NBC.

Contestants line up for verbal abuse from tiresome faux-dominatrix Anne Robinson on "Weakest Link." Overwhelmingly young, white and amped masochists undergo torture for fun and profit on "Fear Factor." The gullible, the clueless and the foreign are the butt of nasty pranks on "Spy TV." A latecomer to the reality party, NBC is now the ratings belle of the summer ball, with "Weakest Link" regularly placing in the Nielsen Top 10 and "Fear Factor" and "Spy TV" in the Top 20.

NBC stands for "Nothing but Cruelty," goes the joke, but the Peacock Network is not complaining. NBC's new president of entertainment, Jeff Zucker, took office with a twofold mission: 1) Find the next "Survivor" or "Who Wants to Be a Millionaire," and 2) reel in younger viewers. He hasn't quite succeeded on the former. "Weakest Link" still trails "Millionaire" in the ratings, and its five minutes as a "Survivor"-style cultural phenomenon are long gone. ("G'bye," indeed.)

But Zucker's reality shows have managed to strike the fancy of 18-to-34-year-old viewers. These are the viewers who made the globe-hopping mystery hunt "The Mole" a modest demographic hit for ABC, who did the same for Fox's skanky "Temptation Island" and who are no strangers to MTV's seminal reality shows "The Real World," "Road Rules," "The Tom Green Show" and "Jackass." Thanks to shock shows like "Fear Factor" and "Spy TV," NBC now outscores the other broadcast networks with viewers in this advertiser-coveted demographic group. NBC has already ordered more episodes of "Fear Factor" and "Spy TV" (both shows, by the way, are productions of Endemol, which gave us "Big Brother"); they'll most likely be held in reserve to air next year as midseason replacements.

TV critics have pretty much uniformly trashed "Fear Factor" and "Spy TV" -- a sure sign that Zucker's gambit is a success. Critics aren't in tune with the kind of TV that young adults want to watch, goes the NBC party line. "There is a whole generational thing going on in TV. This group has grown up with MTV and ESPN and the X Games. They are not as interested in watching 'ER' or traditional situational comedies," Zucker recently told Entertainment Weekly.

So what are 18-to-34-year-olds interested in watching, according to the network gurus? Stunts, gross-outs and the humiliation of "real people" just like themselves. But when you think about it, this isn't so new. Spying and schadenfreude have been around since the dawn of reality programming -- from "Candid Camera" to "The Newlywed Game" to "That's Incredible!" to "Cops," your grandparents and parents liked to watch, too.

Maybe the issue isn't that TV is so much cruder and harsher than it used to be, but that we are. Yes, TV is responsible for lowering the bar of cultural acceptability, and right now, it's really low. But you can't blame the reality TV boom entirely for the depressing glimpse into the American character it provides. We are, it seems, a nation of bored, ill-educated, vacuous, voyeuristic, attention-craving chuckleheads, and how we got that way is a million-dollar question I'd need to use all my lifelines to answer.

I am not immune; I got hooked on "Survivor." But then, I'm a traditionalist at heart, and "Survivor" simply found a compelling new way to tell a dramatic, linear story. "Fear Factor," however, has no such storytelling gifts. Each episode of "Fear Factor" introduces a new group of six players. Each group of players looks exactly like the last week's group of players (three men, three women, one of whom in each gender group is always African-American). The players are required to perform three punishing, yet carefully supervised, "extreme stunts"; if they refuse or are injured during a stunt, they are eliminated. The winner gets $50,000. Most of the show consists of five people standing around watching someone else do something stupid. Affable host Joe Rogan, king of the chuckleheads, sidles up to contestants and encourages them to mess with one another's heads and "strategize," but the players haven't figured out how to strategize in a "game" like this beyond "OK, I'm going to try not to die during this next stunt."

The stunts on "Fear Factor" are supposedly chosen to represent people's most common fears. These have included lying in a pit of snakes; being covered by hundreds of rats, some of which are biting; walking across a high-rise construction beam; eating live insects; being suspended upside-down by the ankles from a crane, then hurtled toward the ground at 60 miles an hour; trying to outrun a police attack dog; and being dragged across muddy, rocky ground by a galloping horse. Watching all this, you can't stop thinking, Is this what it takes for people to feel alive in our benumbed society? Performing meaningless, degrading stunts on TV, while the rest of us gape and laugh? Wait, don't answer that -- I'm afraid to know.

Asked by Rogan what their "motivation" is for doing the show, the "Fear Factor" contestants rarely cop to being motivated by the exposure or, you know, the money. It's never about the money -- apparently, the one thing Americans fear more than snakes and rats is being perceived as greedy or shallow. So the contestants always say they're doing the show for "the challenge," to "prove something" to themselves. Of course, they could get a similar rush and sense of accomplishment from tests of endurance with a purpose, like teaching in a low-ranked public school or joining the Peace Corps. But then, they wouldn't be on TV, so would it still count? Maybe if they called it "Peace Corps" ...

It's easy to make fun of the "stars" of reality TV -- that's one of the genre's main draws. After all, these exhibitionists are asking for it. "Spy TV" (which NBC no longer calls a reality show, insisting that it's a "comedy") takes this mean-spiritedness a step further and invites us to laugh at people who don't know they're on TV. Sure, it's been done before, on "Candid Camera" and "David Letterman," for example. But in the hands of "Spy TV," the pranks are irredeemably cruel -- the show is simply too cruddy to laugh at.

Hosted with insufferable smirkiness by Michael Ian Black (who costars on NBC's "Ed" as the insufferably smirky manager of Stuckeybowl), "Spy TV" specializes in hidden camera fun designed to induce terror in the victims. Patrons of a hair salon are suddenly quarantined by a biohazard SWAT team and told they've been exposed to flesh-eating bacteria. A young man goes on what he thinks is a test drive and ends up begging and screaming for the wild joyride to end. A hapless slacker is vigorously interrogated by "police" for a crime he didn't commit.

At times, "Spy TV" is so crude and shameless, it plays like a put-on -- maybe it's actually a parody of reality TV in disguise. After all, in one notorious "Spy TV" prank, a group of people trying out to be contestants on a new reality show called "Cannibals" were asked to eat a sample of "human flesh" (actually, pork). Not surprisingly, hardly anyone refused. If that isn't a ruthless bit of self-satire, I don't know what is.

"Spy TV" co-executive producer Jeff Boggs stood by his show in TV Guide this week with a by-now familiar age-warfare throw-down: "We looked at the critics who hated us ... I don't think they were quite our demographic anyway." OK, I guess I'm too old to appreciate the genius of "Spy TV" -- that doesn't bother me. What does bother me, though, is the way all these industry types glibly label an entire generation of viewers as sadomasochistic couch boobs, for the benefit of ad revenue. I'm a loser, you're a loser, wouldn't you like to be a loser too!

But these shows are hitting the bull's-eye with their intended audiences. People are watching. And that's the crappiest thing about the shock trend: It seems to confirm your worst suspicions about our society, that there is a large segment of the population out there immune to shock. Intentionally or not, a couple of the stunts on "Fear Factor" have paralleled terrible real-life incidents of violence, but nobody seems to have noticed.

Call me overly sensitive, but I was stunned that NBC had the nerve to air the dog attack stunt, especially after the two recent horrific, national-news-making dog attack cases in the Bay Area. (In June, a 10-year-old boy had his ears and much of the skin on his face ripped off by pit bulls; in January, a woman was fatally mauled by a neighbor's bred-for-fighting dogs in her own apartment building.) It was revolting to see "Fear Factor" contestants, wearing protective padding, being chased down, pulled to the ground and clamped onto by a growling police dog, all for our entertainment pleasure.

And let's not forget the earlier horse-dragging stunt. Watching the lone African-American male contestant being dragged by a rope tied to the horse, emerging with arms and hands scraped raw, I couldn't stop wondering why, after the dragging death of James Byrd, any black man would submit to such a culturally and racially loaded tableau. I don't even want to think about the viewers who got off watching it.