We got ballot trouble in Florida, boss. Don't return any calls from Katherine Harris, and your lame brother? Think Fredo in "The Godfather." 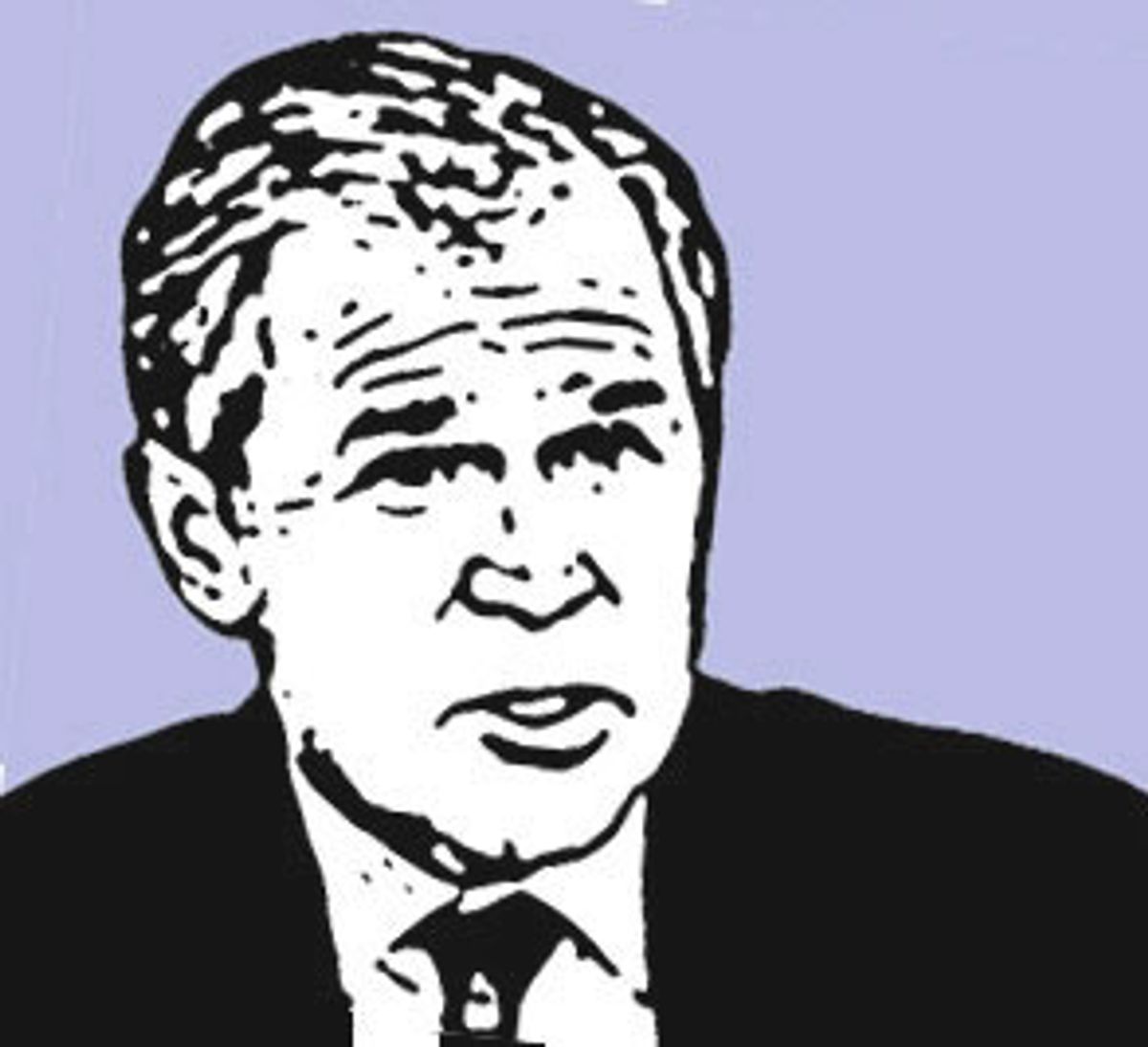 Welcome to Italy. (Glad to hear you enjoyed the flight over, especially "Shrek." Don't thank me -- Ari pulled strings with Katzenberg on that one. I think they went to the same Hebrew school or something.) Anyway, we're hearing nothing but raves about your stopover in England. "GB rules GB!" is how Condi put it in her memo. Next up: "GB rules G-7!" Protesters be damned!

In any case, I don't want to cloud your mind with biz back here, but I need to let you know that the proverbial prairie poop has hit the WH fan regarding (are you sitting down?) Election 2000. Deja-friggin'-vu. Turns out that the N.Y. Times' ridiculously overblown investigation into absentee ballots has inspired every bow-tied, pencil-chewing hack from Bangor to Baja to dig out their old Tallahassee files to see what they can come up with. (Don't these guys have anything better to do with their time? If they really want to investigate something, how about figuring out why the Rangers are 26 games back? There's a story.)

As much as we'd like to, we can't ignore this Florida thing -- the Whine-ocrats are taking out their crying towels, tuning up their violins, stomping on their sour grapes. If we don't respond blow-for-blow, Russert and company will bury us. Besides, laying low doesn't work anymore. Just ask Gary Condit.

1. KAT WOMAN: She's ba-aack. Just when you thought it was safe to return Katherine Harris' calls, the Times reopens Pandora's makeup case and fingers her in the absentee ballot fiasco. Needless to say, the ambassadorship to the Virgin Islands is on permanent hold. (She wasn't the ideal choice for those particular islands anyway, if you know what I mean.) But Dick says we need to distance ourselves further. Therefore, until further notice the only Floridians we do business with are Anita Bryant and Goofy. OK, OK -- so Harris took one for the team. Tough luck. Throw yourself on the sword, expect to get poked.

2. HE AIN'T HEAVY, HE'S THE GOVERNOR: Speaking of throwing oneself on one's sword. I know this may be hard for you to hear, but for the moment, Jeb has become a political liability. A fly in the administrative soup. A Baby Ruth in the GOP Jacuzzi. Let's face facts: Jeb's got as much chance of being re-elected governor as Karl has of being named People's Sexiest Man Alive. (Sorry, Karl, just making a point.) So how do we keep this nasty wad of Juicy Fruit off the bottom of our sneaker? Ironically, we take a few tips from our Democratic predecessors. Jimmy ("The Geek") Carter publicly admonished his beer-bellied bro for cozying up to Gadhafi. And Clinton had Roger busted for blow, for cryin' out loud. You must do the same. Don't get me wrong -- I'm not asking you to play Michael to Jeb's Fredo and have him knocked off (Karen: Can we?). But he needs to understand, brother-to-brother, that your presidency is more important than his governorship. Solution: Ask your mom to handle it.

3. THE BOYS ON THE BENCH: As you may know, that paragon of legal virtue, Alan ("Go, O.J., Go!") Dershowitz, has been getting major-league face time, skewering our Supreme Court cronies in that new sci-fi novel of his about the Florida recount. Well, we've got news for Mr. Claus Von New-low: he's about to be cross-examined -- White House-style. We're rounding up some legal eagles of our own to gavel the crap out of Dershowitz's two-bit, city-slicker, Harvard Yard hoo-hah. We've already got Wapner booked on Larry King; we're still waiting on Judge Judy. Meantime, Dick says it looks bad if you're seen among the robed in public, so no more lunchtime pick-up games with Clarence and 'Tone on the courts behind the Court.

4. JOLTIN' JOE: Surprise, surprise, our biggest pain-in-the-tush from the campaign has emerged as our numero uno ally -- Joe "Honest Abraham" Lieberman. According to the Times, it was Lieberman's "Meet the Press" brain-fart ("Give the military voters the benefit of the doubt") that sealed the deal for us last November. After that, we were home free. So how does this translate to the here-and-now? Let's just say that for the time being, you and Joe are going to be as inseparable as Mogen and David. Remember, every photo op you grab with Kid Kosher sends one more reminder to Mr. and Mrs. USA that we got 1600 fair and square. Simply put: We're hangin' onto Joey tighter than a Litchfield deer tick. Pack your yarmulke, boss -- we're hitting the Bridgeport bar mitzvah circuit till we got kishkas out the gahzot.

5. PRINCE ALBERT IN A CAN: Haven't heard much from the guy lately, but we know he's out there somewhere. Waiting. Just like a bull shark off Pensacola, Al Gore is biding his time, circling the waters, getting hungrier and hungrier (even though, from the looks of him, he's been spending a bit too much time at the Carthage, Tenn., Krispy Kreme. Beep! Beep! Wide load!). Well, I say bring him on. After all, Election '04 is just 28 months away, and, unlike Captain Ozone, we're a lean, mean, fighting machine. Speaking of which: Dick's lost 5 pounds since his pacemaker was installed. Now there's your Sexiest Man Alive.

P.S. By the way, re: your inquiry about the cuisine at tonight's G-7 banquet. I asked Bob Torricelli, but he wouldn't give me an answer unless I made a donation to his PAC (I'd sooner fork over my 401K to the ACLU). And when I called Giuliani at home, some woman answered and told me Rudy doesn't live there anymore -- then she hung up on me. Luckily, someone still had Susan Molinari's number, and she set me straight: According to Susan, Spaghetti-O's with the little hot dogs are not considered Italian food. Don't ask for them.