The prolific comic genius behind "Blackadder," seven novels and four plays has been accused of going soft. He's happy to tell detractors where to stick it. 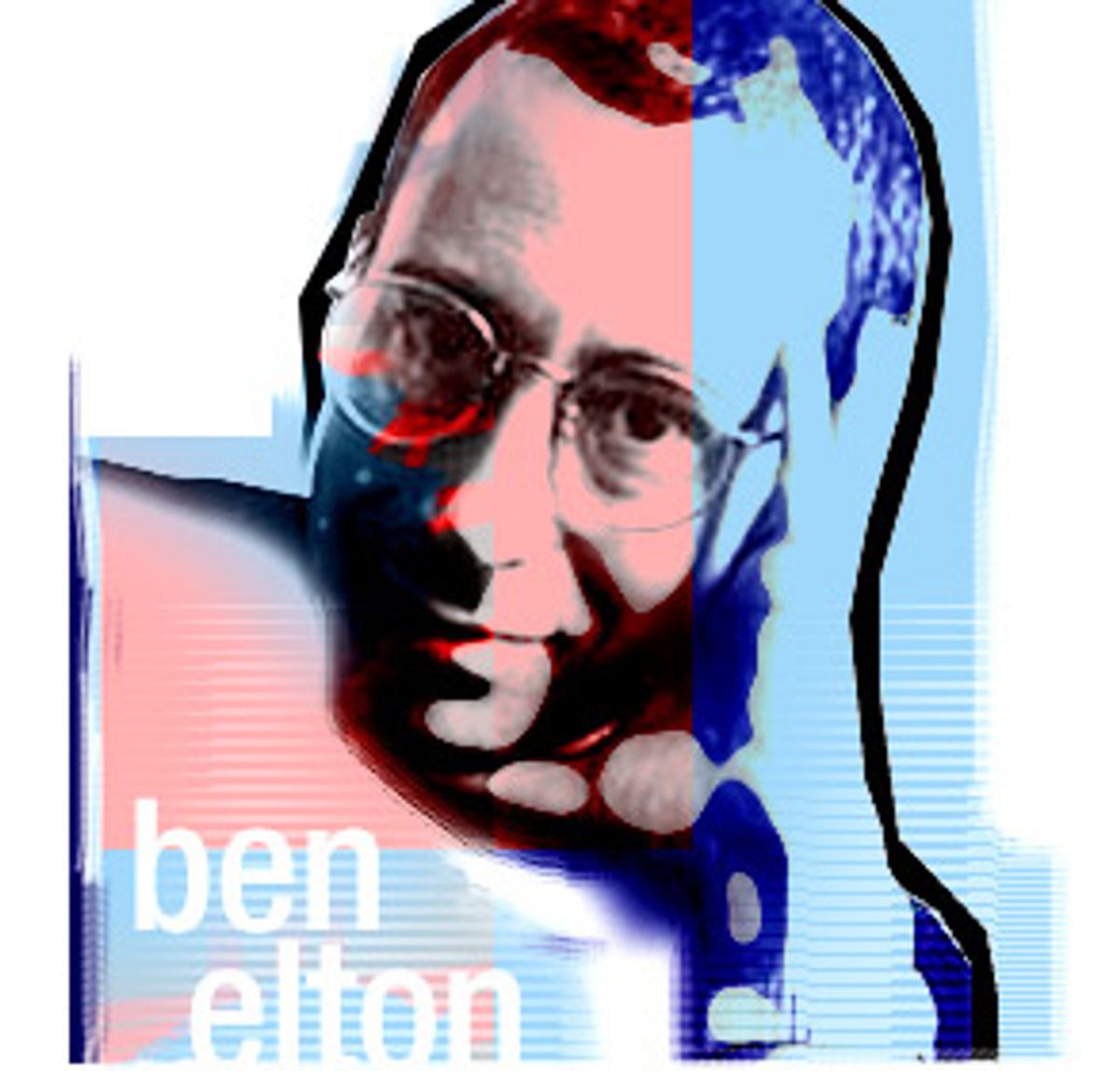 Ben Elton, at age 42, would be one of Britain's monuments, except that he's too busy to stand still. A working stand-up comedian at 20, he was only 22 when he co-wrote "The Young Ones," which amused and disgusted television audiences in equal measures -- and reshaped British comedy as surely as "Monty Python" had done a decade earlier.

He has since proved unstoppable. At 28, he already had five TV series on his writing CV, including the popular "Blackadder" (starring Rowan Atkinson and Miranda Richardson). At 30, he had written "Stark," a hefty, bestselling novel. Like many of his succeeding works, it was both funny and truly disturbing, with a brutal and pessimistic ending.

At 32, he had written two plays, both for the London stage. By his 40th birthday, he could boast seven novels, four plays and 11 television series as a writer. Add that to his work as Britain's top stand-up comedian -- known for his energetic tirades against Thatcherism and world business -- and you see someone with no shortage of inspiration.

"Maybe Baby," his first film as director, suggests that he is no longer such an angry young man. Based on his novel "Inconceivable," it's a sweet romantic comedy about London yuppies Sam (Hugh Laurie) and Lucy (Joely Richardson) as they try desperately to procreate and he tries desperately to conquer writer's block.

To his long-term fans, it's a sentimental debacle, like Jim Carrey doing "The Truman Show" or the Rolling Stones performing for the queen. However, the "new" Ben Elton (just like the old one) is happy to tell his detractors exactly where they can stick it.

One of the topics covered in "Maybe Baby" is writer's block, which is interesting because you seem to be someone who doesn't know much about writer's block. You seem to come up with work at an envious rate. Do you ever have writer's block?

Not really. I never have real writer's block, like my character in the movie. He's on the verge of really doubting whether he's a writer at all. Every writer has block in the short term, because that's part of the process. If you get frustrated for a week because nothing's really happening, that's not writer's block. That's part of coming up with the ideas. I've never doubted that I'd ever write again, and I know some writers who have that problem. But I can write about it. I don't think you need to experience something directly to write about it. Otherwise, nobody would be able to write a historical novel. I know about the desire to create, and I have some knowledge of how bad I'd feel if I couldn't do it.

Your earlier plays and the novels were much more pessimistic, much darker. You had the world ending in your first novel, and "Popcorn" was even more downbeat. I saw the play in London and I was just shaking at the end of it.

I'm sure that's what you were hoping.

I wanted you to be moved and shaken.

Starting with "This Other Eden" and "Blast From the Past," and even more so with "Maybe Baby," you've been exploring nicer territory. It seems a bit more optimistic. Is this something to do with age?

I hadn't really thought about it, because normally people don't put it as nicely as you've put it. People say, "Oh, you've gone soft," but I say, "Oh, fuck off!" I'm just writing what I want. But you're right. It is an optimistic piece, because the experience my wife and I had with IVF [in vitro fertilization] is that you learn to celebrate the love you have, rather than trying not to be completely defined by the love you haven't got and you can't yet get. So it is optimistic -- although I didn't give them [Sam and Lucy] a baby at the end, because I didn't want to go that far.

But I've always been an enthusiast. Some of my writing is darker because that's where the plot took me. I don't think I'm personally more optimistic, but certainly my work seems to be a bit sunnier. I write more personally now. I'm not embarrassed to talk about my own feelings.

It's funny you mentioned "This Other Eden." Someone said recently, "That's your first-ever sex scene." And it's true -- I never wrote anything that was potentially embarrassing before that. I think as you get older you get more relaxed about yourself. Now I'm happier to write about love and sex and emotions, and perhaps I'm less interested in writing about the entire world blowing up.

"Maybe Baby" covers a lot of current issues, but you don't seem to be on a soapbox anymore. You were tackling a lot of the great issues of the world in your first books.

Certainly "Stark" was a polemical work. There's no doubt about it. I was talking about money, the environment, that sort of thing. I haven't made a conscious decision to make less socially committed writing. I remain personally and socially committed to and interested in the world I live in -- and in any efforts that can be made to improve it. But I suppose it's true that previously I was writing social observations, as opposed to personal observations. I guess you just change. I bet you I'll write something with my opinions and politics in it again at some point.

I certainly don't feel that I'm no longer connecting with the wider world, but I have definitely written more personally in the last few years. "Blast From the Past" is essentially a love story. "Inconceivable" is definitely a love story. What can I tell you? I think your observations are right, but I don't know why. I don't feel I've changed; I always write what I feel like.

After watching "Maybe Baby," somebody said, "This is definitely your first romantic comedy." I don't agree. The very first episode of "Blackadder" I ever wrote was a lovely little romantic comedy. Blackadder falls in love with a girl dressed as a boy. He was totally in love. He thought he was going gay, but he was going to live with him anyway. I think I've always had a spread in my work. "Blackadder" and "The Young Ones" weren't particularly politicized; "Stark" was. What can I tell you?

You said previously that you became a performer more as an avenue for your writing. Now you've become a director. Why direct?

Because I felt like doing it. I'm lucky; I can get work. It doesn't always come easy; getting a movie financed is very hard, but I did it. I'd never really wanted to direct a movie before because it takes so long -- it's a two-year commitment, and here I am, still publicizing it. It's a big deal. And you know me: I like to work hard. I like to crack a novel out, do a stand-up tour, get another sitcom going. So I didn't think I had the time. But with "Maybe Baby," I felt so personally connected with the story that I thought I was the best person to do it. I'll be honest with you: I know something about comedy; I've been in the game 20 years. So I decided to do it myself -- and I'm thrilled that I did, because it turned out to be probably the most fulfilling professional experience of my life.

"Maybe Baby" talks about in vitro fertilization. You came to Australia to promote the film just after Australia's conservative prime minister, John Howard, had spoken out against lesbian couples using IVF to start families.

In Britain everyone's saying it's a romantic comedy that has no politics at all. Then I come to Australia and it turns out I've written something at the center of a debate. The funny thing about my film is that it's a perfect IVF for Howard, because it's about a heterosexual couple who are married. There's no doubt that modern technology throws up endless debates, and this is one of them.

Howard's comments were unfortunate, as I think, in the long run, they will lead to further stigmatization of single-parent families. The subtext seems to be that it's a second-class option not to have a father. He may feel that, and he's perfectly entitled to his opinion, but society has changed, fundamentally. He can't turn the clock back. The nuclear family is no longer the absolute way. He's just got to accept that.

There were whispers of a film of "Popcorn," which wasn't to be directed by you.

That's still in the pipeline. I'm talking to Ridley Scott about it. He read the novel, absolutely loved it. He has since commissioned me to write the screenplay. We'll see if it comes off, but you never know with movies. They're a terribly dodgy game, even when you're as big as Ridley Scott.

Do you ever get exhausted? It's quite exhausting simply watching your stage act.

I was a little more frenetic before. My stage routines have gotten a little slower, a little more paced. I prefer it that way. I'm getting older, and my timing is better now. I don't speak quite so quickly. But I do get tired. I'm tired right now -- but that's more a symptom of drinking too much than working too hard. I'm always very enthusiastic about things that I do, so I've got a reason to get up in the morning.

You still must be outspoken about some of your political views.

I don't think I'm any more outspoken than any old pub bore, going on about what's wrong with the government. I just have a wider pub. But I'm still connected with my society, and I'll say what I think when I feel like it.

Do you still get so political now that Tony Blair has brought Labor to power?

Novels like "Stark" were political, but they weren't party political. They weren't about Labor and Thatcher and Tories. It's only in the stand-up work where I do that, and I haven't done any stand-up since I toured Australia in 1997. I don't have a particular desire to do it again -- at the moment. If I did, I'd almost certainly take the piss out of what was going on in the government, if I thought it was funny. But I don't think that Britain is as divided a society as it was in the '80s, so I think there would be less venom in my comedy than there was then.

Mark Juddery is a playwright, critic and movie reporter based in Australia and New York.