The man who discovered the wreck of the Titanic says he's driven by "a childish desire to poke around." 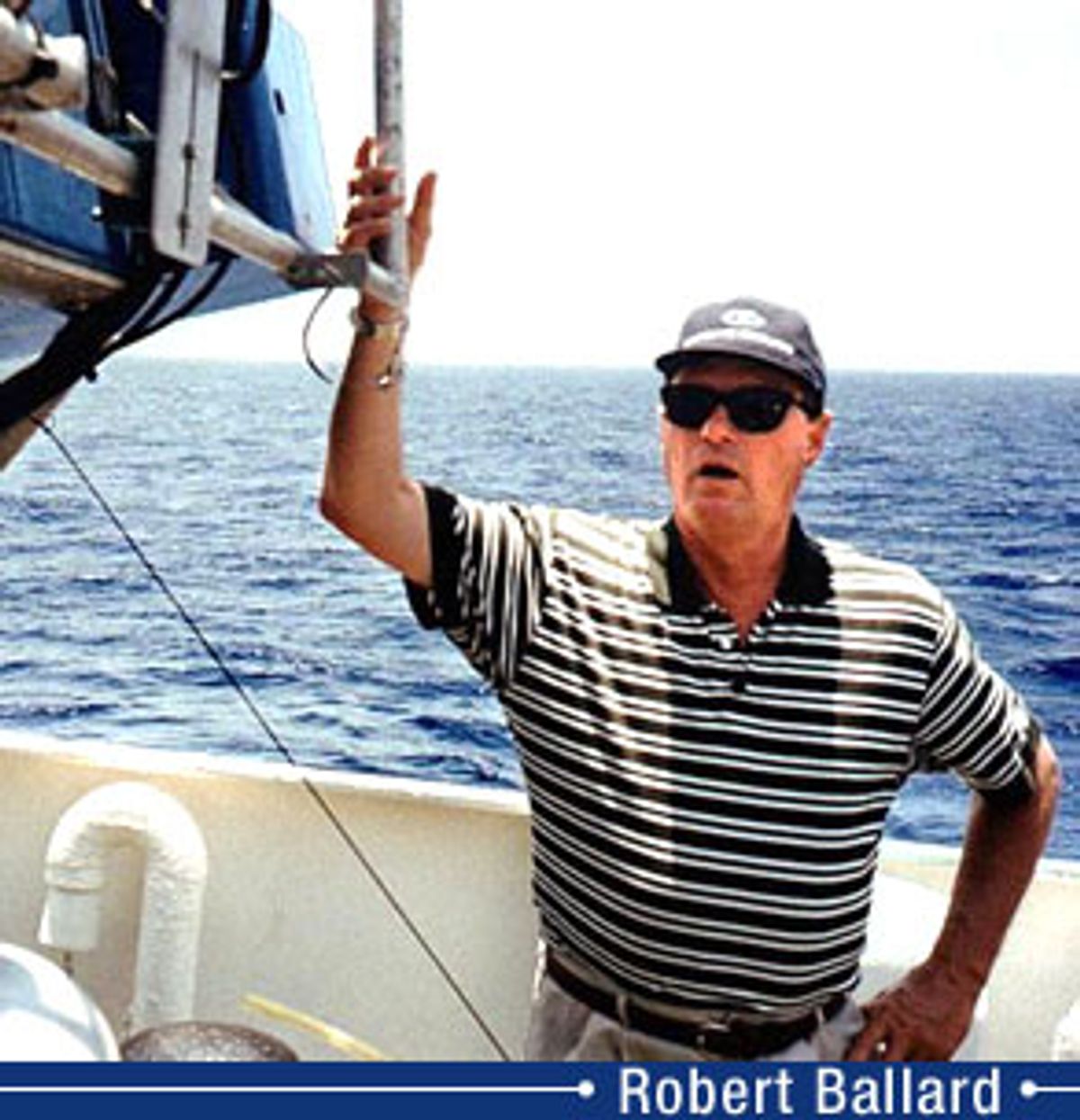 If it's underwater and it's lost, Robert Ballard will look for it. Since the 1970s, the undersea explorer has participated in more than 110 expeditions, searching for everything from sunken ships and buried treasures to the Loch Ness monster. He's found the wrecks of the RMS Titanic, the German battleship Bismarck and the American aircraft carrier USS Yorktown, and explored sunken luxury liners including the Lusitania, the Andrea Doria and the Brittanic.

He has never found Nessie, but we get the picture: Ballard finds ships. Ships galore. What drives someone to spend so much time at the bottom of the world, trapped under tons of water in complete darkness? Is he shy? He might be. Agoraphobic? He could be. Or is he just plain crazy?

In his 1987 book, "The Discovery of the Titanic," Ballard wrote: "My childhood idols were imaginary explorers at the technological frontiers of science -- people like Jules Verne's Captain Nemo and his Nautilus. As long as I can remember, I've been enthralled by the sea. But I've always been more interested in what goes on underneath the waves than on the surface."

In a 1997 PBS interview Ballard said: "The ocean was my friend -- my best friend. And I wanted to be the first kid to put footprints on the sand after a tide. I loved the story of Robinson Crusoe, walking this deserted beach, finding treasures that had been washed up. And I've never grown up. I mean, I still have that childish desire to poke around."

And Ballard has been poking around for decades, racking up one successful expedition after another, in almost every ocean on Earth. A few he's crossed off his list are the Atlantic Ocean, Pacific Ocean, Black Sea, Red Sea, Mediterranean Sea, Tyrrhenian Sea, Sea of Cortez, Lake Ontario, Loch Ness, Amazon River and Kuban River (in Russia). After almost 40 years of exploration, he's running out of bodies of water to explore.

For almost two months, I've tried ceaselessly to interview Ballard, with no success. He is always "on travel" or "at home with his family" or "on a book tour with National Geographic" or "on travel" again. As difficult as he is to reach, it's tempting to think that perhaps Ballard doesn't really exist, or that he mysteriously disappeared several years ago and his name is now nothing more than a front for a large, faceless corporation: trademarked, incorporated, copyrighted, licensed, patented and protected. His assistants have assistants, who have secretaries. He's that busy.

Born in 1942 in Wichita, Kan., Robert Ballard grew up in San Diego, just a few miles from the Scripps Institution of Oceanography. He was a high school student when the Trieste, a two-man U.S. Navy bathyscaph, left its San Diego port in 1959, to plumb the Marianas trench, the deepest part of the Pacific Ocean. It took the two crewmen more than five hours in the cramped bathyscaph to descend 36,198 feet to the bottom of the trench. It was a journey that can be summarized as follows: darkness, darkness, fish ... darkness, darkness, weird fish ... darkness. The farther you go, the darker it gets and the weirder the fish become, until finally you're so deep that there is no longer any light and almost no species of fish that can survive the extreme conditions.

This probably doesn't sound too appealing to most of us and, to some of us, it may sound like torture, but to Ballard it was the perfect job description. Eight years later, schooling completed, he entered the U.S. Navy and was assigned to the Deep Submergence Laboratory at the Woods Hole Oceanographic Institute in Cape Cod, Mass.

During his 30-year stint there, Ballard made what is probably his most famous discovery: the RMS Titanic, resting on a shelf in 12,500 feet of water, 1,000 miles east of Boston. Ballard and his team used a device called the Argo -- designed by Ballard -- to search the ocean floor for any signs of wreckage or debris from the Titanic, which sank in 1912.

Like a deep-sea Swiss Army knife, the Argo, sporting an array of gadgets, is thrown overboard and trawled beneath a research vessel to map the seafloor below as researchers make gridlike passes above. It has night-vision video cameras, a color camera, an echo sounder and a side-scan sonar system that can survey areas 300 meters wide in just one pass.

On Sept. 1, 1985, after searching for almost a week, Ballard's team glimpsed some rusted boilers on the seafloor on the video monitors. Slowly, more than two-and-a-half miles below the surface, the Argo passed over the Titanic's extensive debris field: A silver-plated soup tureen, shoes, serving platters, corked wine bottles and pieces of coal littered the ocean floor in a long trail. Finally, rising sharply from the ocean floor like a ruined city was the wreck of the ship, lying in three pieces, rusted, with fish swimming its corroded hallways.

Describing the event, Ballard wrote: "As the images on the video screen grew more and more vivid -- large pieces of twisted hull plating, port-holes, a piece of railing turned on its side -- for the first time since I had started on this quest 12 years before, the full human impact of the Titanic's terrifying tragedy began to sink in. Here at the bottom of the ocean lay not only the graveyard of a great ship, but the only fitting monument to the more than 1,500 people who had perished when she went down." Returning a year later with Alvin, a three-person manned submersible, Ballard carefully explored the wreck, capturing footage later used in the 1997 motion picture "Titanic."

As a child, fueled first by Jules Verne's "20,000 Leagues Under the Sea," Ballard began reading accounts of early deep-sea exploration by people like William Beebe, who built a crude bathyscaph in 1930, diving to depths of 1,500 feet in waters off Bermuda. Beebe wrote, and Ballard read with grim relish, that if the bathyscaph sprang a sizable leak, the sheet of water entering the capsule would cut a man in half; even a narrow stream of water caused by a pinprick hole, or a misplaced rivet, was capable of drilling straight through Beebe and his partner, Otis Barton, as they sat bolted inside the chamber.

In an interview from 1991, Ballard said: "Like the space shuttle, you could never lose sight of the fact that you were doing something dangerous. It may be apparently routine, but if you mess it up, it will bite you, and it has over the years. I had a fire once -- not in Alvin, in a French bathyscaph -- at 9,000 feet, and almost died."

But to Ballard, the risk of any project is a reasonable trade-off for the answers it might provide. You can get a better sense of how Ballard views his expeditions by taking a look at the names he gives some of his equipment and projects: There's the Argo, named after the ship that carried Jason to the Golden Fleece in Greek mythology; the Little Hercules, a one-man submersible named after the mythological strongman; and the JASON Project, a program Ballard began in 1989 that allows schoolchildren to participate in live video feeds of Ballard's expeditions.

The mythological characters keep popping up for a reason. Ballard views his expeditions as epic adventures in search of a deep-sea Golden Fleece, hidden and preserved for centuries by the conditions at the bottom of the ocean. His discoveries should matter to all of us. In his most recent book, "Graveyards of the Pacific," he writes: "I've been doing this a long time now -- from the Atlantic to the Pacific to the Mediterranean to the Black Sea -- peering through murky depths to see what history can tell us, getting a new and unique perspective on things that shaped our view of the world, and ourselves."

Before 1985, Ballard's research efforts concentrated on the geological formations of the ocean floor and the unusual species that populate them. Discovering the Titanic marked a shift in his career from studying natural history to studying human history.

He was the first American to enter, photograph and map regions of the mid-oceanic ridge, an underwater mountain range -- more than 40,000 miles long and up to 500 miles wide -- that runs in a continuous belt around the Earth. The ridge is the largest geological feature on the planet, zigzagging among the continents, bisecting the oceans and rising 15,000 feet above the seafloor. In other words: Been there, done it, mapped it.

While on the Galapagos Hydrothermal Expedition in the late 1970s -- to investigate unexpected rises in temperature on the ocean floor -- Ballard discovered and described several new species living near hydrothermal vents 9,000 feet below the surface.

In "Eternal Darkness," Ballard describes what he saw: "Warm water shimmered up from cracks in the lava flows. It was turning a cloudy blue as manganese and other minerals, carried from deep within the seafloor, precipitated out of solution to form a solid coating on the cooler surrounding rocks. But that was not all. The seafloor was teeming with life."

For several days, Ballard explored the hydrothermal vents, taking specimens and preserving them in Russian vodka purchased at port in Panama. In other words: Been there, done it, mapped it, sampled it and pickled it in vodka.

He writes: "The dominant macroorganism living near the vent openings was the giant red tube worm, or Riftia pachyptila. These spectacular organisms form large clusters, or hedges, standing up to ten feet high. All around them we could see shimmering flows of milky white, mineral-rich water."

This was new: worms that looked more like B-movie monsters, growing in great thickets on the seafloor. They have no mouth, no eyes and no intestinal tract. They're ugly. They're "bursting out of John Hurt's stomach and flying across the room in a bloody mist" ugly. Protected by a hard, white outer casing, the worms stand upright in clusters, poking the red tips of their bodies into the surrounding water to absorb oxygen.

Like many of the species in the Galápagos' rift valley, they had never before been described and were unknown to science; like his heroes before him, both real and fictitious, Ballard had successfully descended into the unknown, the lost world, and brought back something exotic for the rest of us to inspect.

The tube worms represented the strange otherworldliness of the ocean that has fascinated Ballard for so long; they were his Golden Fleece, as were the wreck of the Titanic, the mid-oceanic ridge and so many of the other discoveries Ballard has made during his extraordinary 40-year career. He has undoubtedly spent more time underwater than anyone else alive.

In a 1999 interview, Ballard said: "If you were to compare the number of people who have been into outer space with the number who have been to the average depth of the ocean, I think more people have been in outer space. Neil Armstrong and Buzz Aldrin walked on the moon before we went to the largest mountain range on Earth, which lies under the ocean."

And that's what makes Ballard's career so extraordinary. For more than 10 years, he spent four months of every year at sea, exploring the seafloor. The way Ballard sees it, we don't need to go into space, and we don't even need to trek to the Amazon Basin, or to frozen Antarctica, when thousands of square miles of ocean floor remain unexplored. Just a few miles off the coast, off any coast, are discoveries to be made.