A tradition of British cinematic whimsy meets a garden of good and evil. 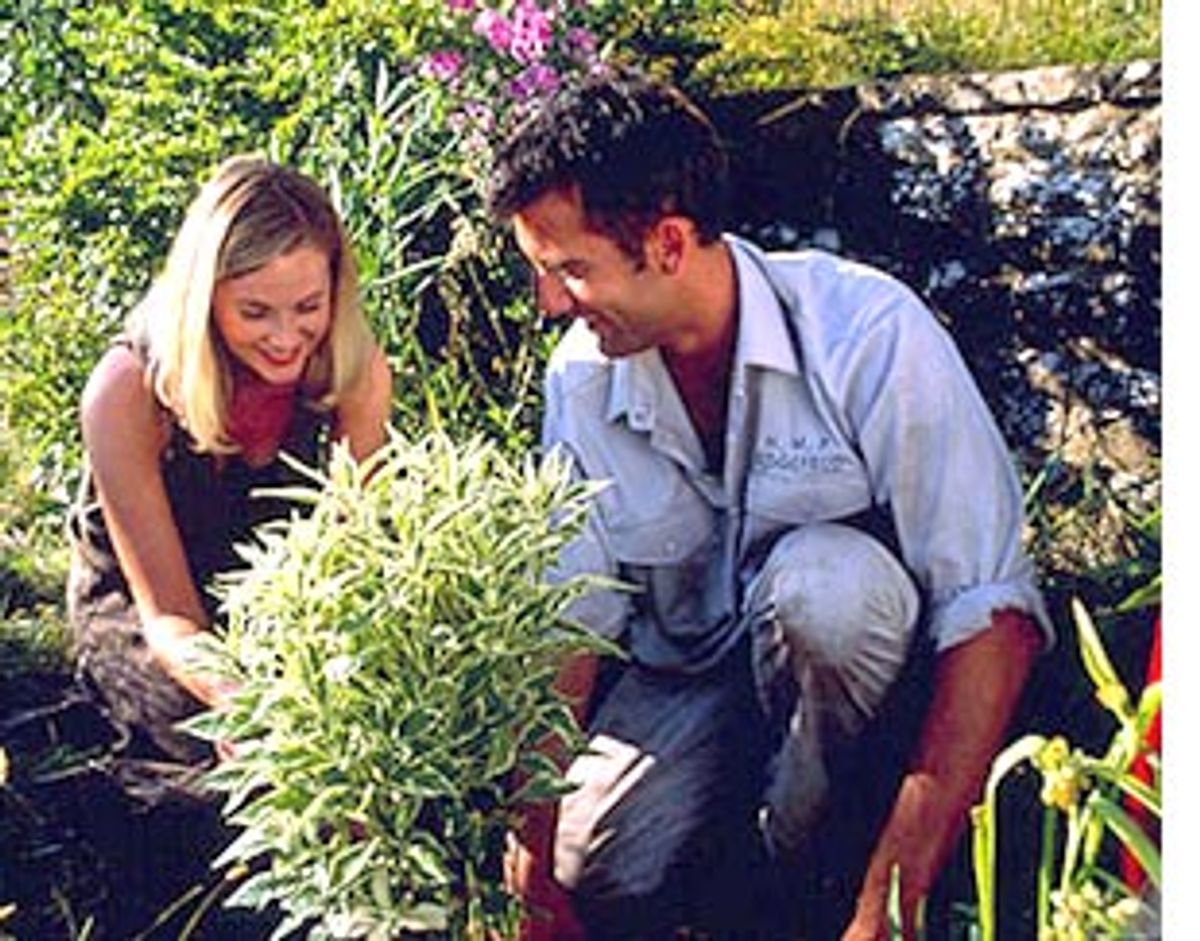 The premise of the English comedy "Greenfingers," based on a true story of convicts who became prize-winning gardeners, might put you in mind of the Ealing comedies of the '40s and '50s. Ealing Studios specialized in gentle, seemingly offhand comic gems about the obsessiveness that lurked in ordinary people. One of the funniest is "Tight Little Island," about a band of Scottish islanders, deprived of alcohol by wartime rationing, trying to save a cargo of whiskey from a ship run aground. But it was the gleam in the eyes of the timid, average men played by Alec Guinness in "The Man in the White Suit" and "The Lavender Hill Mob" that epitomized the spirit of Ealing.

That spirit has surfaced from time to time in pictures like "Local Hero" or Malcolm Mowbray's "A Private Function" and "Out Cold." There was a glimmer of it last year in another British comedy about gardening (of a sort), "Saving Grace." Gardening, along with dog shows, cheese and Shirley Bassey, is one of those English obsessions that seem ripe for comedy. Just how much of an obsession it is can be deduced from this movie's title. Americans say someone has a green thumb; the British include all the digits.

But instead of going for the cockeyed comedy of the situation, the writer-director, Joel Hershman, has given us a redemption picture. The rebirth of the human spirit is generally a sappy idea for movies or books, and prison movies in which convicts realize the wrongness of their ways and attempt to atone are particularly prone to sentimentality. "Greenfingers" is no exception. At one point, the British home secretary suggests that the convict/gardeners make a rock garden with a strawberry bower to symbolize the beauty growing out of cold, hard surroundings.

It's a terrible idea and the movie plays it for laughs. But that's also the soggy metaphor that the movie capitalizes on. We don't need to be told the restorative effect that bringing something to life might have on convicted murderers, though we are, implicitly and explicitly, in scene after scene. There's barely a patch of dialogue that doesn't tell us how we're meant to be reacting to a scene instead of trusting us to discover the meanings for ourselves. It's as if the movie is more concerned about our rehabilitation than the convicts'.

"Greenfingers" is certainly pleasant enough, and if you can put the preachiness out of mind it's entertaining, in its square, conventional way. (Though it's not as funny as another square comedy making the rounds, the French farce "The Closet," which features deft performances by Daniel Auteuil, rapidly becoming one of those actors who's good in everything, and Gérard Depardieu.)

The real men whom this story is based on, inmates at Her Majesty's Prison Leyhill had (by 1998, when a New York Times article on them appeared) won two gold medals at the Hampton Court Palace Flower Show, the yearly invitation-only competition of the Royal Horticultural Society. Their enthusiasm had led to a 1,000-acre arboretum open to the public, plants supplied to surrounding towns, and a service that grows and distributes organically grown vegetables to other prisons.

In the movie, the gardening enthusiasm starts with Colin Briggs (Clive Owen), an inmate sent to an experimental, minimum-security prison. After being convicted of murder at 18 and spending 15 years behind bars he's the prototypical loner. His new cellmate, the aging, ailing con Fergus (David Kelly) gives him some flower seeds; these, against all expectations, take root in the clay-heavy soil surrounding the prison and survive the cold winter. With an eye toward parole, other prisoners join in as a way of getting themselves in good with the warden. But they're bitten by the bug too, and their attentions attract Georgina Woodhouse (Britain's real-life gardening guru, played by Helen Mirren) who sponsors their invitation to Hampton Court.

One of the problems with "Greenfingers" is that you can tell the function each of the prisoners is meant to play as soon as you see him. Fergus is the lovable, wise codger; Raw (Adam Fogerty) is the gentle giant; Tony (Danny Dyer) is the young thief headed for trouble; and Jimmy (Paterson Joseph) is the troubled family man. They never get to go beyond the generic constraints of their roles, and that becomes a problem when Fergus reveals what his crime was. As soon as it's out, the offense is brushed away, along with any examination of the compulsion that led him to commit it.

At least they're an agreeable lot, especially Adam Fogerty's hulking, shaven-headed Raw. It's perhaps the most clichéd of the roles here, the tough-guy whose sudden enthusiasm for gardening is played for laughs. But he's got such a large comic spirit it's a shame that he hasn't been given more interplay with Helen Mirren's Georgina, whom, upon hearing news that the convicts have been invited to Hampton Court, he literally sweeps off her feet.

It's hard to think of another great actress who's as much of a broad as Helen Mirren. The toughness underneath that composed exterior came out in her role as Detective Chief Inspector Jane Tennison the "Prime Suspect" series (I especially remember a scene of her snatching a few minutes away from a case to wolf down a hamburger in the locker room), and the capacity for evil, slutty comedy came out in her performance as Morgan Le Fay in "Excalibur." I kept waiting for her to get a chance to show a little more of the craziness you sense in Georgina's hats, great-brimmed numbers drooping with flowers and veils; it's as if a crazed florist had designed a parade float depicting the Scheherazade story and perched it atop Mirren's head. But she brings out the clipped schoolmarm who barely has the tolerance for her adoring public, who thinks nothing of ordering these cons about in the garden, and who, dripping enthusiasm in her TV appearances, veils that drill sergeant's passion for organization.

That the movie works at all is entirely due to Clive Owen. In last year's surprise art-house hit "Croupier," he didn't project much beyond bored self-absorption. Here he underplays with the confidence of a born leading man. Owen knows how to use his tall body and good looks (he's like a slightly younger, more open Dylan McDermott) expressively. His light glancing touch is a blessing in the scenes where he has to reveal his crime to Fergus, and when he has to inform a parole board what gardening has meant to him. He dries the scenes out, doesn't beg our sympathy.

His best moment comes with Natasha Little as Georgina's daughter Primrose, whom he falls for, in the moments before they first go to bed. Colin hasn't been with a woman in 15 years; when Primrose first kisses him, he stays statue still, as if she and everything else would vanish were he to move. "Greenfingers" works overtime to make sure we miss none of its meanings. Owen manages to express renewal and joy and purpose, even at risk to himself, with a ghost of a smile or a quiet look of satisfaction at some flourishing new plant. He makes this solitary, self-possessed man's new avocation seem perfectly fitting. As Georgina says, the great thing about flowers is that they don't talk back.