The governor struggles to orchestrate a multimillion-dollar bailout of the utility that has spent big bucks on his campaign. 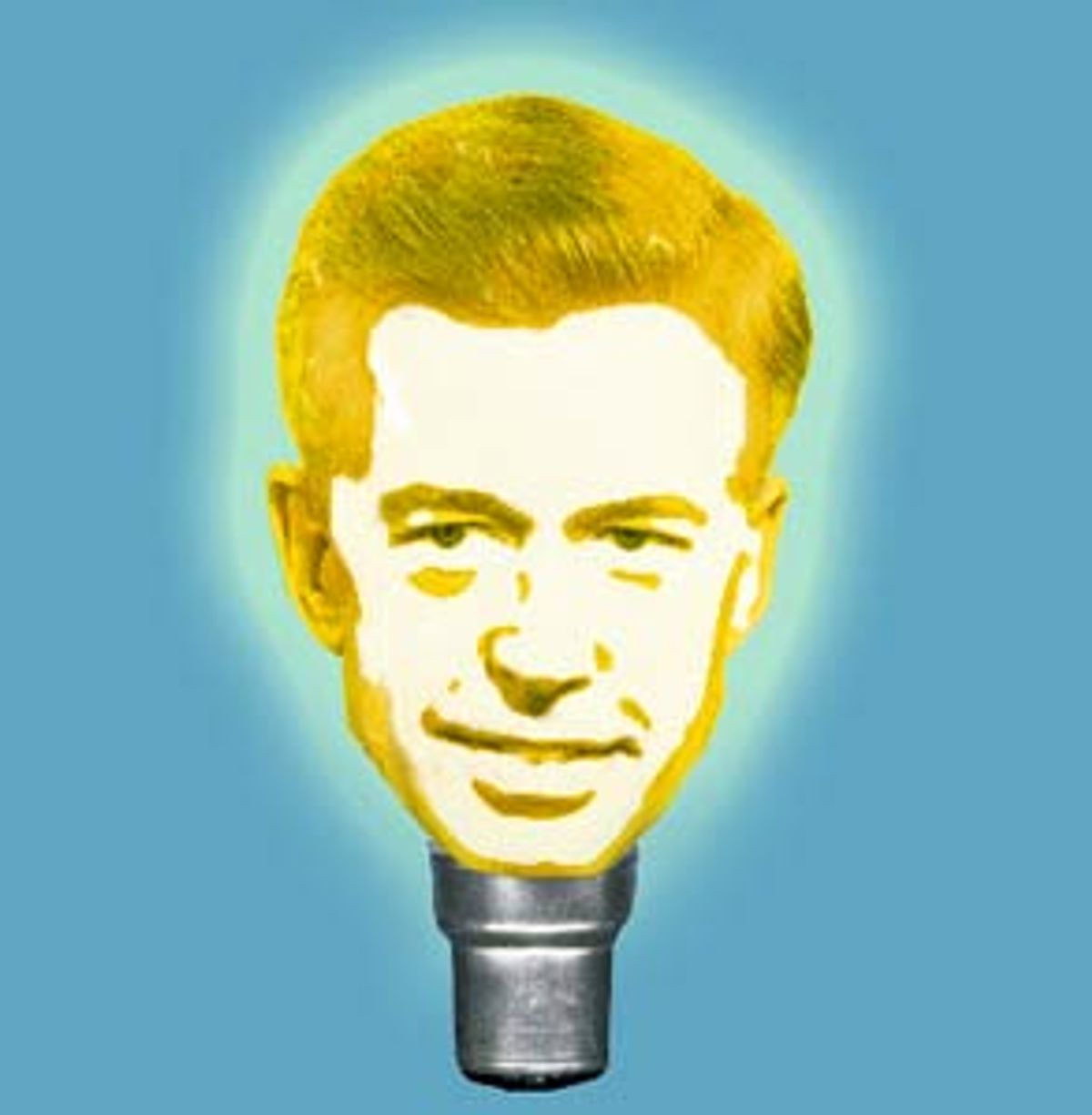 Ever since his January State of the State address, in which he dwelled on the state's power crisis but neglected to mention private utilities' central role in devising the deregulation scheme that caused it, California Gov. Gray Davis has been searching for a way to bail out the insolvent Southern California Edison, which has contributed more than $350,000 to Davis' campaign coffers. Now his drive to save the battered utility, which claims nearly $4 billion in debt and is no longer creditworthy enough to buy power, has gone into overtime, with no solution yet in sight. An attempt to bring the California Assembly back from its summer recess to vote on a new bailout bill Friday was just the latest such effort to fall apart.

The drive to bail out Edison, one of the biggest proposed corporate rescues in U.S. history, remains very troubled, despite a flurry of high-level activity over the past two weeks. The Aug. 15 deadline for legislative approval of some semblance of the very sweet deal negotiated last spring by Davis looms, yet the California Legislature is in recess until Aug. 20. One bill pronounced unacceptable by Edison, backed by Senate President John Burton, the fiery San Francisco liberal, and Sen. Byron Sher of Palo Alto, passed the Senate last week before the Legislature went on recess.

This bill would require Edison -- which lobbied through the disastrous electric power deregulation scheme in 1996 and made billions in profits, which were transferred to the utility's holding company, before being outmaneuvered by the very firms to which it sold its power plants -- to eat more than a billion dollars in losses. Not surprisingly, Davis and Edison preferred a more generous bill by Assembly Speaker Bob Hertzberg of Los Angeles. But that bill, its fate complicated by an even more straightforward bailout offered by another Los Angeles Democrat, didn't make it through the Assembly.

Hertzberg and Davis have just failed in a bid to bring the Assembly back into session to pass another bailout bill, this one more generous than the Hertzberg bill that stalled last week, omitting the state's acquisition of transmission lines that would make the transaction a "buyout rather than a bailout," as the governor's mantra went. The transmission lines are major strategic assets affording the state more leverage over power generators, which is why their acquisition by the state is opposed by the Bush-Cheney administration.

The bailout is a huge priority for Davis, who has populated the top ranks of his energy team with Edison alumni. Davis' new communications chief, former Al Gore press secretary Chris Lehane (who had been working for an Edison bailout at the same time he worked for the state, until the conflict-of-interest heat finally got too hot), has said: "The governor and Edison have the same energy policy" -- a striking point of view, and not at all inaccurate. But the original Davis bailout plan -- negotiated, oddly, on behalf of the state by former Southern California Edison president Michael Peevey -- received little support beyond that of Edison and the Los Angeles Times, on whose board Edison International chairman John Bryson, one of the principal backers of deregulation, once sat. So Davis joined with Hertzberg for slightly tougher versions of the original deal, only to see them languish, with only the substantially tougher version backed by Burton, his frequent antagonist, currently standing.

Of the $1 million Davis raised from utilities and energy companies since he started running for governor (he has stopped taking energy money), Edison has provided by far the biggest chunk, over 35 percent. This is twice as much as given by now bankrupt Pacific Gas & Electric, a larger company.

The ties and tilt are obvious. Not only did Peevey head the administration's negotiation with the utilities, but former Edison executive Vikram Budhraja has a $6.2 million state contract to manage the state's $43 billion in long-term power contracts. And Davis officials were remarkably mum on the woes of Edison's San Onofre nuclear power plant, one reactor of which was offline for the first five months of the year, despite the fact that the accident caused blackouts, raised serious questions about the company's management and maintenance practices, and cost the state a billion dollars for replacement power.

These close ties have been pointed up by the governor's hiring of two nationally prominent spin controllers, former top Clinton-Gore operatives who helped Davis finally accede to the obvious and pound away at the White House's dense web of connections to the energy industry. Ironically, their hiring highlighted the dense web of connections between Davis and Edison.

Lehane and Clinton damage control counsel Mark Fabiani played a major role in implementing the new strategy of bashing Bush and Cheney. But the two brought an enormous amount of controversy with them to their roles, both because of their $30,000 monthly contract with the state and because they worked concurrently for Edison. After some confusing reports several weeks ago suggesting that the duo had dropped their work for Edison, Lehane brushed them aside and told me that, yes, they were still working for Edison to gain a state bailout of the company and that there was no conflict of interest there. "The governor and Edison," he said, "have the same energy policy; there's no conflict in working for both."

Finally recognizing that that comment was uncomfortably akin to another, more hypothetical statement -- "The president and Enron have the same energy policy; there's no conflict in working for both" -- Davis redefined his relationship with the two.

Davis let Fabiani go, retaining Lehane but cutting his pay by a third, and requiring him to stop working for Edison. A seemingly fair result, though some public interest advocates insist that state conflict-of-interest law prohibits his employment in any event, pointing out that his work for Edison occurred within the last year. Adding injury to insult, state controller Kathleen Connell, a fellow Democrat who is sharply critical of Davis' handling of the energy crisis, refuses to pay Lehane and Fabiani.

Meanwhile, top Edison officials said again last week that the utility will go bankrupt without a bailout. Its parent company, Edison International, whose assets have been shielded from the utility's woes after being boosted by transfers of billions from the utility, just posted a big loss. Wall Street had expected a modest profit.

Despite the Assembly's failure to reconvene, bailout talks will continue among an informal working group of top Davis officials, legislators, staffers and lobbyists. Through the L.A. Times, Edison this week trumpeted its utility's recently improved cash flow, which may well stave off moves by creditors to force the utility into bankruptcy while the politicians try again to sort things out.

But the governor's close ties to Edison continue to rankle many in the Capitol and elsewhere. Davis has long been aligned with Edison chieftain John Bryson, who made his reputation as a pro-alternative energy Public Utilities Commission president in the Jerry Brown administration before becoming a bête noire to many environmentalists and renewable power advocates in his current role.

Consumer advocates, like deregulation opponent Harvey Rosenfield of the Foundation for Taxpayer & Consumer Rights, oppose any bailout of the utility, California's second largest, preferring that it join its larger cousin, Pacific Gas & Electric, in bankruptcy. Rosenfield promises to mount an initiative campaign to derail any bailout deal.

Many legislators feel the same way, noting that the sky did not fall after PG&E went bankrupt. Sen. Mike Machado, a conservative Central Valley Democrat, says that bankruptcy court can do a better job of sorting out Edison's finances than the Legislature. Some liberals privately disdain Edison for its role in crafting the state's deregulation debacle. And Republican legislators are having a field day sounding like consumer advocates.

Notwithstanding the struggle over the fate of Edison, California is in better shape than most feared a few months ago. Surprisingly mild weather (California's hot summer has materialized in Japan, which just set a record for electric power usage), coupled with increased conservation, power companies controlling themselves to save deregulation and retain the credibility with a divided federal government to enter lucrative new businesses, and federal restraint of the most egregious price spikes have reduced an across-the-board calamity to a mere multifaceted crisis.

But Davis, who after a very slow start deserves credit for at least some of the good news, is under fire for the huge long-term power contracts his administration negotiated, which, after months of secrecy, turn out to be more expensive than advertised and perpetrate a green blackout, ignoring renewable energy in favor of fossil fuel generation. Not only do the contracts eschew renewables, a number of them provide the actual financial underpinnings for a new generation of fossil fuel plants, guaranteeing their profitability for the companies developing them. A troubling result for the Democratic administration of a state that by itself is the world's fifth-largest economy, especially at a time when most of the rest of the world is criticizing the Republican administration in Washington for refusing to deal with the greenhouse effect.

Ironically, given all the furor over the Bush-Cheney energy plan, it is the Davis plan that is actually furthering California's dependency on fossil fuels. "The state's contracts are the biggest public power project in the country," notes Center for Energy Efficiency and Renewable Technologies director John White, "and yet they are a festival of fossil fuel development."

Meanwhile, there has been no federal order of refunds for the astonishing price run-up California has experienced over the past year. With refunds, the state could bail out Edison and perhaps PG&E as well. But two weeks of negotiations in Washington earlier this summer between state officials and power generators went nowhere. Which is precisely where the Edison bailout remains.