"The Sappho Companion" by Margaret Reynolds

Genius? Pervert? Seducer and murderer? Homely bluestocking? Nymphomaniac? Every age has its own version of the woman whose 2,600-year-old verses invented the poetry of love. 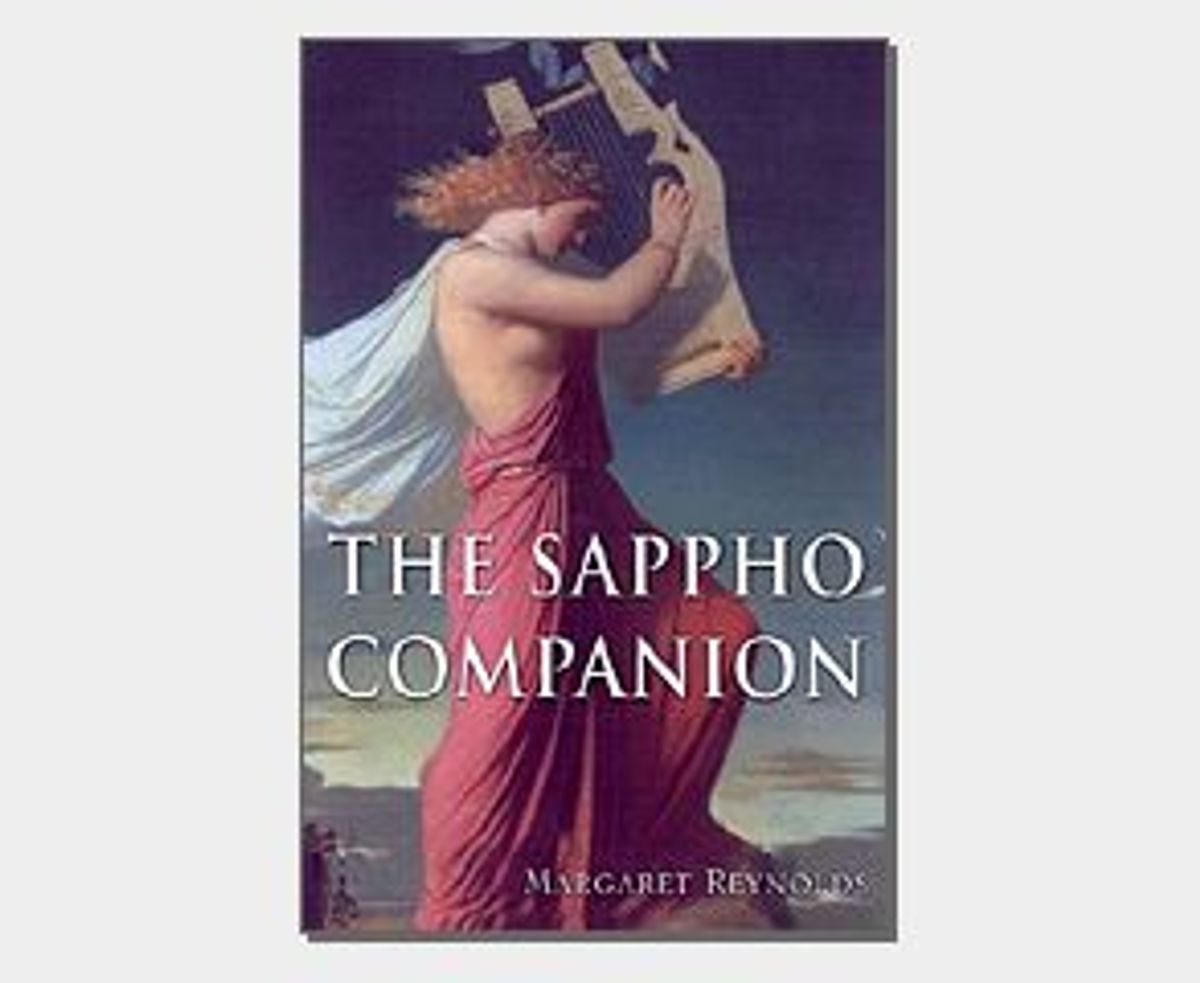 If people know anything at all about Sappho these days, it's probably that she was a lesbian. They're far less likely to know that she was first of all a Lesbian -- that is, a native of the Greek island of Lesbos -- or that she was one of the great poets of ancient times, or that her specialty was lyric verse about the ecstasies and torments of love. (In fact, she practically invented the form.)

Only a few hundred years ago, though, an informal poll would likely have revealed an entirely different image of Sappho, whose life was a popular subject for paintings, operas, ballets and other pageants. In the 18th and early 19th centuries, she was mostly famous for having thrown herself from the top of an enormous cliff out of unrequited love for the beautiful (male) youth Phaon. In those days, she was sometimes depicted as having written verse, sometimes as having a great fondness for girls, but the heartbreak and the leap were the important things. This was only one of many incarnations. Throughout history, Sappho has been labeled a genius, a pervert, a lovely blushing maiden, a homely bluestocking, a nymphomaniac, an uptight schoolmistress, a solitary, a diva, a cult leader, an abandoned lover, an irresistible seducer, the "Tenth Muse," a mother, a feminist, a victim, a masochist and a sadist.

With "The Sappho Companion," British critic Margaret Reynolds has collected bits and pieces of all these Sapphos into a single, diverting volume. The book is like a plate assembled at a vast literary buffet -- a dab of this, a morsel of that, the sweet, the salty, the delectable, the piquant and, occasionally, the cloying. This piecemeal presentation is apropos, since all we have of Sappho's 2,600-year-old poems are 213 fragments gathered from rotting papyri rescued from antique rubbish heaps and, in the form of quotations, gleaned from later works. (That's all that remains of the legendary Nine Books of Sappho, a treasure archaeologists still dream of unearthing.) Some of these fragments consist of a mere line or two, but their impact on Western poetry, and even on the popular culture of romantic love, has been profound, much like the erotic passion that Sappho said shook her heart "like the wind rushing down on the mountain oaks." When a Tin Pan Alley lyricist describes a feeling as bittersweet, or a heart as being as ripe as an apple hanging from a bough, or love as stinging like a bee, he's echoing the Tenth Muse.

We know almost nothing about Sappho's real life, just that she lived on Lesbos (off the coast of what is now Turkey) over two-and-a-half millenniums ago. As Reynolds points out, the gaps in her story and her poetry have invited all kinds of fabrications. "The Sappho Companion" includes a selection of the fragments in their original Greek (which were themselves transpositions of oral works), followed by wildly differing translations and "reconstructions" of the fragments, ranging from classical vamps to high Victorian frippery to spare modern verse.

Some of Sappho's early translators, unsettled by the fact that many of her most passionate poems were clearly addressed to girls, simply changed the gender of a few nouns and pronouns to straighten things out. There are mentions and hints in the fragments of lovers (female, but also possibly male), friends, a daughter, a wayward brother, rival poets and especially the goddess Aphrodite, to whom Sappho addressed several of her poems. Some of the legends about Sappho's life sprang from these references, but the subsequent depictions of her life are pure fantasy. ("Phaon" turns out to be an alternate name for Adonis, the consort of Aphrodite and therefore a fitting subject for poems written by the goddess's devotee.)

The sensuality and emotional intimacy of Sappho's poetry went in and out of fashion, but in general her work was highly esteemed during her own life and ever after. Her personal reputation is another matter entirely. As Reynolds' formidable literary detective work demonstrates, whenever Western men and women have clashed over how the female of the species should conduct herself, sooner or later Sappho's name gets thrown around. Ovid, for example, mocked the poet as unduly confident in her fame and her lesbian paramours, only to be brought down by the devastating masculine splendor of Phaon.

Hunchbacked English poet Alexander Pope (who translated Ovid's Sappho poem) showed just how flexible Sappho references could be when he got into a terrible feud with famous intellectual beauty Lady Mary Wortley Montagu in the 18th century. He had once adored her and compared her verses to Sappho's. The precise nature of their quarrel remains a mystery, but he began to revile her in the press, accusing Lady Mary of being "greasy," syphilitic and a whore -- all under the name of Sappho, although it seems that everyone who read these attacks knew exactly whom he was talking about. Lady Mary displayed an ambivalence toward Sappho common in women of literary ambition: She countered the insults but didn't disavow the sobriquet -- it was flattering after all to be likened to the greatest female poet of all time, even if that meant also assuming the mantle of infamy that came with it.

As often as not, even those who didn't quite understand the precise nature of Sappho's sexual inclinations still believed her to be a sexual deviant of some kind. She was frequently portrayed as a heterosexual prostitute, or as an unattractive older woman chasing after a gorgeous boy. One of the delights of Reynolds' "Companion" is that it collects all sorts of not necessarily sterling but nevertheless fascinating ephemera along with the work of major writers. Besides veiled slanders, like Pope's, directed at various well-known literary ladies by men who owed them money or had been romantically spurned, there are librettos for lurid and sentimental stage productions in which lovers titillatingly recline on bowers and everyone dies in the end by preposterous means.

One jolly-sounding poetess wrote a comic poem in which the lovelorn Sappho gives up her books in order to "cultivate the culinary arts" ("Teach me more winning arts to try/to salt the ham, to mix the pie") and win Phaon's love. And there are some downright dirty verses in which Sappho complains that Phaon once but no longer "clap'd my Buttocks, o're and o're agen" and, in another burlesque, a more knowing gentleman sympathizes with the "fair maid" who "must bear/When some rough marksman to a hair,/Shoots at the little crack." You don't find this stuff in the Norton Anthology.

In the 19th century, the Romantics, who loved a towering, rocky, gloomy cliff -- especially with a thinly clad woman at the brink of it -- had more sympathy for Sappho and her terrible, if entirely mythical, doom. Disheveled, with her now-useless lyre (emblem of her art) cast thoughtlessly aside, she was the embodiment of the passions' toll on the sensitive spirit. Around the same time, a book called "La Nouvelle Sapho" became a perennial bestseller in the booming underground pornography market; it offered a confidential account of a lesbian cult that conducted their "unnatural" rites under a bust of the poet who gave their sexual orientation its name. The decadents, particularly Baudelaire and Swinburne, loved Sappho, whom they saw as a sublimely immoral voluptuary. Poet George Moore wrote a verse drama in which she is a heartless dominatrix who permits a girl who is in love with a youth who is himself in love with Sappho to impersonate her in order to spend one night with the man; the condition is that the girl must first sleep with Sappho and, second, agree to kill the youth in the morning.

Both of these images of Sappho -- the victim of love and the titillating libertine -- were preferred by men; women tended to see her as an inspiring, if also cautionary, figure. When contemporary novelist Jeanette Winterson imagined a cranky reincarnated Sappho returning to contemporary times, she has her say, "I have a lot of questions, not least WHAT HAVE YOU DONE WITH MY POEMS?" The complaint works both literally and figuratively: Most of Sappho's work was lost, the papyri it was written on used for compost and tinder, but by the dawn of the 20th century even what survived of her verse had been eclipsed by her reputation.

Yet some of the most sensational depictions of Sappho do have a seed in her writings. She is a poet of desire, who nakedly voices both its delights and its pains. She describes love as a "limb-loosening King," and in perhaps her most famous fragment, in which she watches with keen envy the young man who sits next to her beloved at a feast, she suffers what has since become the prototypical case of lovesickness:


... At mere sight of you
my voice falters, my tongue
is broken.

Straightway, a delicate fire runs in
my limbs; my eyes
are blinded and my ears
thunder.

Sweat pours out: a trembling hunts
me down. I grow paler
than dry grass and lack little
of dying.

That translation is William Carlos Williams', and surely Winterson's Sappho cannot fairly accuse the modernist poets of the early 20th century of neglecting her verse. Ezra Pound idolized her poetry, and H.D. patterned her entire ouevre and perhaps a good deal of her personal life on Sappho's. If the Lesbian poet has since become too crude a symbol of female homosexuality (Winterson, a Sapphic sexual outlaw herself, was probably jeering at this p.c. appropriation), she has survived much more burdensome typecasting. In the end, her poems are the one constant thing, and they've already proven themselves immortal.