Police in London's gritty Brixton neighborhood are losing the war on drugs, so the police chief is experimenting with not enforcing cannabis laws. 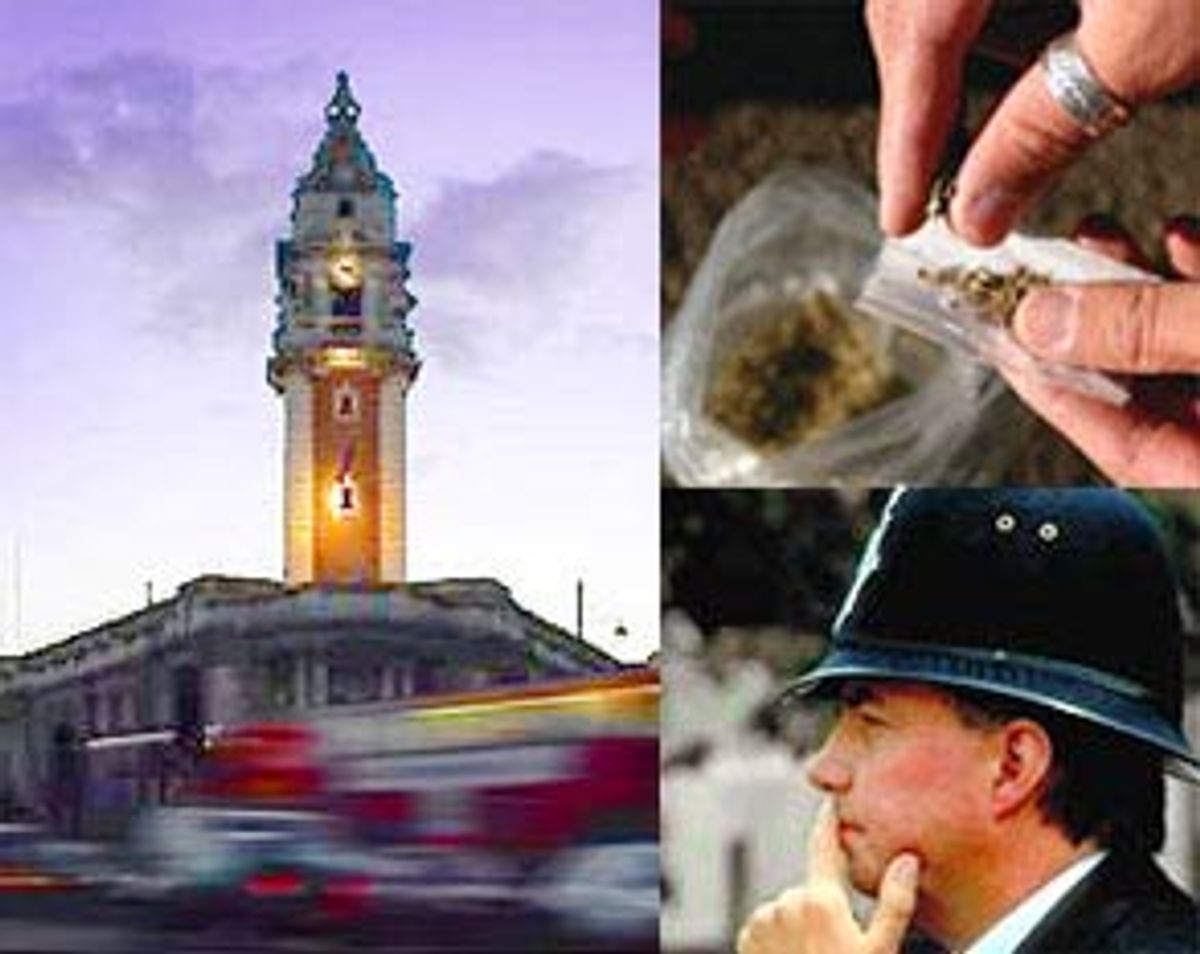 When they kick at your front door in Brixton, chances are it won't be for drugs. Earlier this month, police in the south London borough of Lambeth, where Brixton is located, began a six-month experiment in which they are supposed to ignore minor marijuana offenses. In one of the most serious attacks yet on Britain's harsh drug laws, Brian Paddick, the local police commander, has instructed his force to turn a blind eye to citizens caught with pot. His success or failure will be a key factor in the growing national debate over the future of the country's war on drugs.

Britain has some of Europe's harshest drug laws -- a minor marijuana bust can bring up to six months in jail, with a fine of 5,000 pounds (about $7,000). But according to an exhaustive report on U.K. drug policy published last year by the Police Foundation, a think tank partly funded by the government, this policy has largely failed. Meanwhile, Britain has developed Europe's biggest drug problem.

Moreover, as many police officers will readily admit, enforcement is a mess. About 90 percent of drug arrests are for possession, and of those, around 75 percent are for possession of cannabis. Yet with the exception of Lambeth's experimental program, there is no efficient way to handle simple possession cases. Drug arrests in Britain are a bureaucratic nightmare for police, requiring up to five hours of paperwork and other red tape to process a suspect -- time that many believe could be better spent on the streets fighting more serious crime. And officers who choose to go against policy and not make arrests are thereby eroding the authority of the police.

The result is a system that is plugged with minor drug crimes and a population that increasingly thinks the drug laws are inappropriately harsh. As has happened in the United States, police in the U.K. have come under fire for their stop-and-search policies and profiling of potential drug users and dealers. Such tactics have drawn especially strong criticism in ethnically mixed neighborhoods such as Brixton. Stop and search "has done little to engender good relations between community and police," says Danny Kushlick, director of Transform, an organization that campaigns for reform of drug laws. The Lambeth initiative "will help in that regard," he believes.

Under the new rules, the police in Lambeth may confiscate your joint, but the most that will happen to you otherwise is a solid scolding, formally called a caution. A caution involves about the same level of bureaucracy as a traffic ticket: The officer seizes the drug, and the person who is busted must sign the warning. That's the most lenient punishment police can issue after an arrest. But despite its toothless name, a caution bites. It still requires a hefty dose of desk time for cops -- and it can create legal problems for the recipient because it requires an admission of guilt. Worse, a caution shows up on a person's permanent police record, which must often be revealed, for example, to potential employers. And a caution can cause real trouble for anybody working in fields such as child care and healthcare, or anybody seeking a visa to live abroad.

Still, the initiative is the first step in a long journey for a country that has recently begun to show a willingness to experiment with alternatives to the strict enforcement of drug laws. Scotland, which enjoys a certain degree of autonomous rule, has gone possibly the farthest by developing a range of penalties for drug use or possession -- including warning letters and fines -- that require neither reams of paperwork by the police nor admission of guilt by the person they've collared.

Most of the experiments involve treatment of hardcore addicts following a bust. There is a growing interest in alternatives to incarceration for hard-drug users in the U.K., including a pilot program that supplies pharmaceutical-grade heroin to junkies and then slowly reduces their dosage until they are no longer addicted. Judges increasingly seek to get addicts into rehabilitation programs instead of prisons. Yet most of these solutions deal with hard drugs, not cannabis, and occur only after an arrest has taken place, not before.

It's not surprising, then, that politicians and policy experts are keenly interested in the Lambeth experiment. Seldom does police pragmatism square so neatly with the will of drug-law-reform activists, and the 65 percent of voters who, according to a recent survey by the left-leaning Guardian newspaper, think cannabis possession should be the lowest priority for police. And nowhere has reform become more symbolic than in Brixton, a rough corner of Lambeth known for its great night life, serious crime and bad drug problem.

No matter what eventually comes of the Lambeth trial, Britain is still in the Stone Age with regard to drug law reform in Europe. Most Americans are aware of the Netherlands' lenient approach to pot; the host of the annual "Cannabis Cup" dope degustation has decriminalized, but not outright legalized, possession and distribution of small quantities of marijuana, thus giving rise to Amsterdam's famous coffee shops.

Other European countries aren't far behind. Belgium recently decriminalized possession of small quantities of marijuana for any person over age 18, and both Italy and Spain have dropped criminal charges for possession of small amounts while retaining administrative penalties and fines. And in 1994, under a challenge made to German law, the nation's Constitutional Court ruled that turning minor cannabis offenders into criminals was unconstitutional. Although anti-cannabis laws remain on the books in Germany, almost no charges for possession have been brought since then.

The police may have been concocting the Lambeth scheme for ages, but it would never have come into existence without at least the tacit support of the government. Credit Tony Blair's Labor government with creating an environment in which the experiment could take place. David Blunkett, the new home secretary, has been in office only a few weeks but has already made his mark on the drug debate: first by firing the ineffectual drug czar and eliminating the office, and then by allowing the Lambeth experiment to move forward. Blunkett has even called for an "adult, intelligent debate" on drugs.

Some members of the Conservative Party have gone even further. Peter Lilley, who as former deputy leader of the Tories has solid right-wing credentials, has responded to the hubbub surrounding the Lambeth experiment with a call for full-scale legalization of marijuana. Although some party members consider the proposal outrageous, Lilley has some influential backers, including Charles Moore, editor of the conservative Daily Telegraph. Lilley also has an ideology: Because the Tories are a party of free choice and the current drug laws infringe on such freedom, the party should not support them.

Despite the progressive Lambeth experiment, and the apparent political support for it, there is little evidence that Britain's politicians are preparing to follow their neighbors across the English Channel down the path of decriminalization. Debate there may be. Equally likely are committees and studies and reports and recommendations ad infinitum. Yet, as Transform's Kushlick points out, there are few issues on which politicians are so far out of sync with the public as the war on drugs. "The climate for change is here," he says, "but the political will is not."

The Labor government is cursed by its left-wing history and is unlikely to risk being called soft on crime by pushing for all-out change. And despite Lilley's position, the Conservatives never have been -- and still aren't -- a true libertarian party with leanings toward greater personal liberties.

Ann Widdecombe, a leading hard-line Conservative and critic of the Lambeth initiative, presses a completely different line. Widdecombe recently told a Sunday Independent reporter: "The Conservative Party is opposed to legalization and, indeed, decriminalization. If we legalize cannabis, it is very unlikely that the drug barons would just go home."

Still, the experiment has catalyzed public debate over the country's drug laws. As a compromise between extant legislation and the reality of enforcement police routinely confront, it may well point the way toward decriminalization by default -- a situation similar to Germany's, where the laws remain on the books but are seldom used.

Just days after Paddick announced the launch of the pilot program, British police and customs officials came back with a noteworthy rejoinder, saying they would no longer hunt down marijuana smugglers. If officers stumble across marijuana in their ongoing pursuit of heroin and cocaine smugglers, they will confiscate it and make arrests. But they won't target pot. The war on marijuana, blared the tabloids, is over.

That is, of course, an exaggeration. Growing, dealing or possessing cannabis is still a crime in the U.K., and the penalties are, by and large, still enforced. A recent court case, modeled after the 1994 constitutional challenge in Germany, unsuccessfully argued that the country's cannabis possession laws contravened the European Convention on Human Rights.

However, for the next six months at least, Brixton will remain a safe haven. And what is happening there is both remarkable and ordinary: People are going about their lives as before, the smell of pot floats in the air no more frequently than before and the drug dealers hustle as they always have. Except for one thing: Now a dreadlocked man has positioned himself at the exit to the Brixton Underground station, wedging himself between a bootleg-CD seller and a proselytizer.

As the station disgorges commuters, he calls out in his thick Jamaican accent: "Ganja! Sinsemilla! Don't be afraid to smoke in Brixton!"