Will his vague "Communities of Character" initiative pull his presidency back to the center? 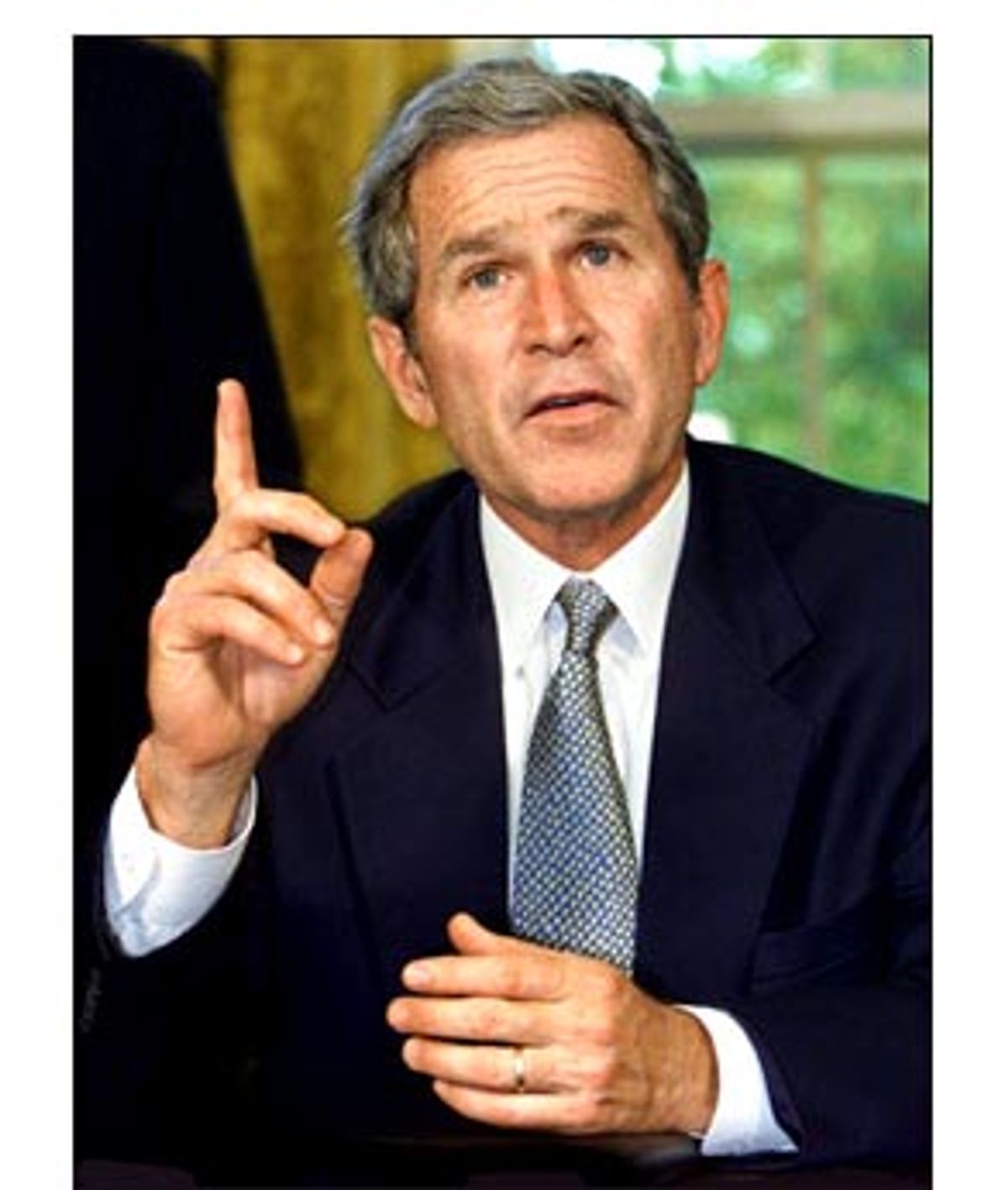 In his own inimitable way, Bush tried to depict himself as an unflinching leader, a my-way-or-the-highway conservative who isn't shy about scrapping key international treaties in the face of global opposition, or, closer to home, proposing an energy plan that unabashedly scratches the backs of his friends in the energy business, cranky environmentalists be damned. In his first six months, Bush the believer also has pushed through a massive tax cut, has dug in his heels to kill campaign finance reform and a tougher right-to-sue provision in the patients' rights bill and is moving on his promise to try to partially privatize Social Security. Here's hoping Bush truly has the courage of his convictions, because his ideological obstinacy is clearly costing him politically. Though he won a victory on patients' rights in the deal cut late Wednesday, Bush was criticized by members of his own party -- most notably Sen. John McCain, R-Ariz. and Rep. Greg Ganske, R-Iowa -- for cutting the deal behind closed doors, without input from other co-authors of the bill. It is the same kind of political brashness that reportedly led to Sen. James Jeffords' defection from the GOP, costing the party control of the Senate.

Bush was also boosted Thursday by a new ABC News-Washington Post poll showing the president's approval rating at 59 percent, welcome news after the Zogby poll released Tuesday showed the president's approval sagging. The Brookings Institution's Thomas Mann told the Washington Post that Thursday "was a good day after a week of bad days. The combination of [the patients' rights] agreement -- assuming it sticks today -- basically avoids what was shaping up as a real downer for August. It ends up being a more mixed picture going into August, and avoids becoming a feeding frenzy about failure."

In the Zogby poll, just 47 percent of those polled gave Bush a positive job rating, while 51 percent gave him a negative rating. The same poll conducted a month ago had those numbers essentially flipped, with a 51 percent positive rating for the president and only 48 percent negative.

Among the most troubling stats for Bush in the Zogby poll was his performance among married voters -- a key Republican demographic with whom Bush now enjoys only 55 percent support. "The 55 signifies to me just how little he's grown," Zogby told the National Review. "This is a group he did well with during the election and one he's supposed to be representing. This is the kind of group that will help him build a majority, and he's nowhere with them."

The White House professes not to care about the polls, with spokesman Ari Fleischer denigrating the accuracy of Zogby's polls generally. Still, most national polls have shown Bush on a downward slide since his inauguration. And "White House planning documents" leaked to the Washington Post last week, as Bush prepared for his August vacation at his Crawford, Texas, ranch, show his handlers are preparing to reinvent the president, or at least recenter him. Dubbed the Communities of Character initiative, the plan has the hallmarks of a Karl Rove/Karen Hughes production, down to the alliteration (shades of "compassionate conservative" and "reformer with results," each coined when Bush needed a little goosing in the polls).

The Communities of Character initiative, the Post's Mike Allen reported, will put "more emphasis on the presidential role of moral leader with a series of executive actions and legislative proposals designed to foster community spirit and family values" and "play down issues geared toward conservatives that dominated his first six months in office."

The new plan will search for the elusive American moral-political core, with a little tug on the heartstrings for good measure. Bush is reportedly considering helping to provide e-mail services to link grandparents and grandchildren on the Internet, as well as addressing issues like adoption and teen pregnancy. The requisite media- and Hollywood-bashing is also part of the plan, encouraging news outlets to "increase reporting on good news" and promote movies that cut against racial stereotypes. All of this is an effort to capitalize on the "consensus that a renewal of shared values in this country is needed," according to the Post.

White House spokesman Jimmy Orr says Communities of Character is simply a continuation of themes outlined in his inaugural address. "The president mentioned the commitment to live out our nation's promise through civility, courage, compassion and character," Orr said in trademark Bush alliterative style. "The president in the months ahead will continue to address these themes to elevate the national dialogue and give parents the tools they need to raise responsible and educated children."

That spin notwithstanding, the fact remains that while Fleischer refutes the polls, the White House is simultaneously responding to them. Perhaps this was the master plan all along -- first placate the base and then move toward the center? Or maybe it's simply an adjustment to the new legislative realities -- Jim Jeffords and the Senate are gone, and a group of moderates in the House has emerged as a new caucus set up in opposition to many of the president's key domestic policies. But will it work? Will voters go for the Bush administration's new fall lineup?

Of course, Bush's defenders point out that President Clinton was also sputtering at this point in his first term. He was mired in squabbles with his own party over gays in the military, and his healthcare plan crashed in a cloud of futility. The newly elected Clinton couldn't even fill the top spot in his Justice Department, going through two nominees before the Senate approved Janet Reno. In fact, at this stage of Clinton's presidency, his numbers were substantially lower than Bush's, with his job approval rating down to 41 percent in some polls.

But the defense that "Clinton struggled too" should not be evoked by any Republican who doesn't like the sound of "Speaker Richard Gephardt." Two years after Clinton was elected, his floundering cost Democrats their control of Congress. And though Clinton was reelected by a comfortable margin in 1996, it was only after his administration took a hard turn to the right, passing welfare reform, declaring the end of the era of big government and shifting Democratic economic policy from one of tax and spend to one of deficit reduction, purging liberal members of his Cabinet in the process. The former liberal also scored points by taking stands on hot-button social issues like school uniforms and sex- and violence-blocking television V-chips -- stands that allowed him to reach out to more conservative voters without having to spend much political capital.

Clearly, the Communities of Character initiative borrows from that same playbook. The plan has reportedly been in the works for months, but don't expect big media fanfare for these communities of character. One memo quoted by the Post recommended avoiding a "traditional media roll-out of the program" and opted instead for "creative media tactics to create a buzz."

Like leaking it to the Washington Post, one assumes. And the new administration catchphrase was stealthily introduced to the press last week in a White House briefing, when Fleischer advertised the president's trip to Virginia for the Boy Scouts Jamboree Sunday as a place where Bush would "make remarks on values and communities of character."

The videotaped address to the jamboree mostly featured lofty platitudes and plenty of Bush-speak -- no doubt reminding voters that the president is no Clinton when it comes to soaring rhetoric or connecting with an audience.

"You know, next month I'll be going to my ranch in Crawford, where I'll work and take a little time off," Bush said in the speech. "I think it is so important for a president to spend some time away from Washington, in the heartland of America. And whenever I go home to the heartland, I am reminded of the values that build strong families, strong communities and strong character, the values that make our people unique. It is those values that are such an important part of Boy Scouts ... The goodness of a person and of the society he or she lives in often comes down to very simple things, and words found in the Scout law. Every society depends on trust and loyalty, on courtesy and kindness, on bravery and reverence. These are the values of Scouting and these are the values of America."

Democrats can scarcely contain their glee at Bush's sagging poll numbers, or at his tepid attempt at a comeback. Democratic National Committee spokeswoman Jennifer Palmieri says instead of making substantive changes like Clinton did after the 1994 elections, Bush is simply trying to resell the same right-wing conservatism in different packaging.

"I think his fundamental problem is that he has no idea why he's president and he has never engaged with the American people about any of the problems facing the country," Palmieri says. "America has no idea who he is. Bush led with the candy, the tax cut. He didn't have to fight for it particularly hard, and the American people have discovered that he has nothing left and nothing to say to them."

Bush is hoping that the taste of the tax-cut candy will linger politically, as Americans receive their rebate checks, signed, sealed and delivered by President Bush, this summer and fall. But even the rebate p.r. boomlet has been muffled by the news this week that instead of making a scheduled $57 billion payment on our national debt, the United States will actually be borrowing $51 billion to pay for the tax cut -- a swing of $108 billion and the largest loan taken out by the Treasury Department since it borrowed $77.2 billion in the first quarter of the 1996 calendar year.

Still, it's too soon to label the Bush presidency in trouble. Late Wednesday he cut an apparent deal with Republican holdout Charles Norwood, R-Ga., on a patients' bill of rights, a victory for the administration if the deal holds. But even some conservatives say his sagging poll numbers are bad news for Bush. Writes National Review columnist Byron York, "The president's less poll-obsessed allies respond this way: The next presidential election is more than three years away, and nobody knows what will happen between now and then. So why worry about polls? Answer: Because polls do more than just predict (sometimes badly) the results of elections. The president's job-approval ratings have a here-and-now effect on his ability to push his agenda through Congress and in the national media."