With the law just one day old, same-sex couples are flooding the wedding registry. 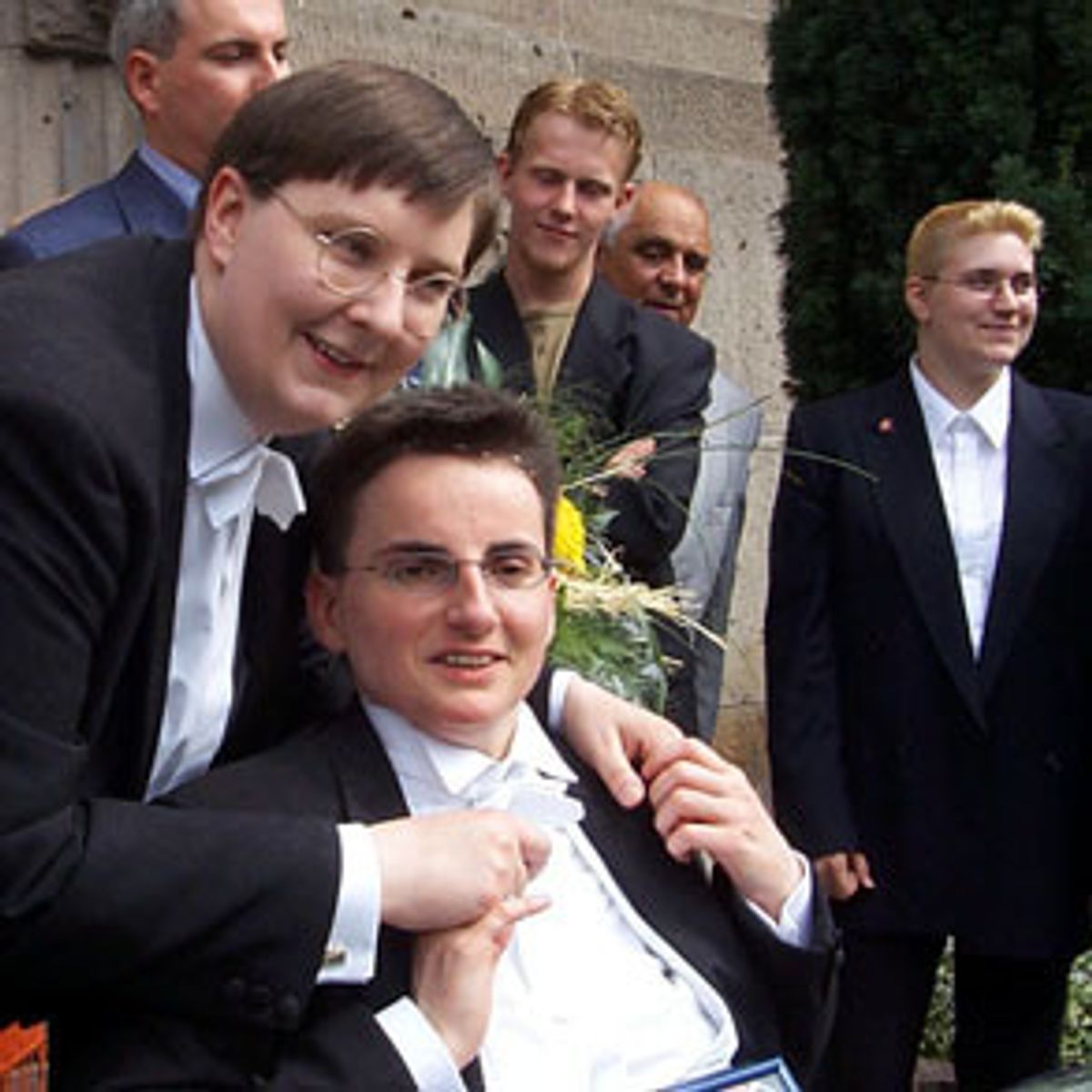 The district of Schvneberg, long the gay center of this city and once the romping ground of expatriate writer Christopher Isherwood, was ground zero yesterday for the first celebrations -- legal and in the streets -- of Germany's first legally recognized civil unions of same-sex couples.

Around 9 a.m., several dozen people gathered inside Schvneberg's City Hall -- where in 1963 President John F. Kennedy gave his famous "Ich bin ein Berliner" speech -- to witness the union of theologian Gudrun Pannier and lawyer Angelika Baldow, the first lesbian couple to apply for a same-sex civil union in Berlin. Outside were an American-style media stakeout and a few demonstrators, most of whom protested that the new law, which permits "registered domestic partnerships," falls short of bestowing equal legal rights on same-sex unions.

Inside the City Hall, Pannier and Baldow, both 36, exchanged vows before family, friends and reporters. "We exchanged rings symbolically five years ago," says Pannier, "but this is the real thing."

And so, even as special-interest groups continue to lobby for the introduction of a constitutional amendment that would ban same-sex marriages in the United States, Berlin is in the grip of gay wedding fever. Appointments at the city's wedding registry offices are already booked up through the first two weeks of August; so intense is the interest in gay marriage that employees at the office stopped counting the number of people calling for appointments after the number exceeded 250.

The Pannier and Baldow nuptials were the ceremonial apex for a city that has been reveling in all things gay for weeks now. In June, acting Mayor Klaus Wowereit of the ruling SPD Party (the Social Democrats) introduced a new phrase into the German lexicon by outing himself and announcing to the world: "I'm gay, and that's a good thing." Earlier this week, the Green Party threw a bash for Berlin's gays and lesbians to celebrate the civil union victory.

In a statement released Wednesday, Wowereit announced: "The [civil union] law doesn't fulfill everyone's needs, but it's a great step forward. It should cause something that was never abnormal to be recognized as normal everywhere in Germany." His sentiments were shared by Claudia Roth, leader of the Green Party, which was instrumental in pushing the law through the Bundestag. "Something in Germany had to change, and that's a good thing -- things will become more open, more tolerant, and [Germany] will become more European," she told reporters.

The Green Party's next move will be to introduce legislation meant to pave the way for same-sex couples to adopt children. But it's going to be an uphill battle. The Constitutional Court decision that legalized same-sex unions in Germany, and the legislation that followed, do not include provisions that would permit homosexuals to adopt. In a fashion similar to Vermont's "civil union" law, the registered partnership measure in Germany skirts the prickly issue of what might come after "marriage" in these newly legal unions.

Basically, the new civil union law offers gay and lesbian partners the right to sign up for health insurance with their spouses. It also offers same-sex couples the right to register their partnerships -- in most cases at the same registration offices where heterosexuals seek wedding applications. (The new law also requires that a couple seeking to dissolve the partnership must do so in court.) Finally, the law extends immigration rights to same-sex partners who are not German citizens.

But opponents say that like any compromise legislation, the German gay civil union law is flawed, granting gay couples fewer rights than those enjoyed by heterosexual couples. For example, gay couples will still lack many of the tax benefits bestowed on heterosexuals who marry.

And there is no guarantee that gay "marriage" will be an option any time soon in certain areas of the country. Bavaria, Mecklenburg-Western Pomerania and Hesse are delaying implementation of the new federal law because they have not yet passed their own versions of the law, which gives German states wide latitude in how they allow gays to register their partnerships. The process by which couples may apply differs from state to state -- in most, they can obtain a license from the wedding registry office, but in some, they must pay a visit to the local notary's office. (By sending gays to a notary's office, critics argue, certain states and communities are trying to push gays as far away as possible from the places where traditional marriages are registered.)

In fact, as Berliners celebrated their pioneering gay unions, dozens turned out in Munich to protest the Bavarian government's steadfast refusal to enact the law. Bavaria, along with Saxony, unsuccessfully appealed in July for an injunction against the law. The states argued that same-sex civil unions would endanger the institution of marriage between a man and a woman. Bavarians must wait until the state legislature implements the law in the fall before they can register their partnerships.

Yet despite the official foot-dragging in these states, support for gay marriage is strong in Germany. A national poll conducted last Friday showed 60 percent of the country supporting gay civil unions that are equal to heterosexual marriage. At least 55 percent said they didn't believe gay marriages would have a negative impact on families. Germans may well have been influenced by European neighbors with civil union laws already on the books. Denmark, France, Sweden, Norway, Iceland and the Netherlands already have same-sex civil union laws (as does the U.S. state of Vermont, which celebrated the first anniversary of its gay civil union law in July). Holland is the only country that allows full-fledged gay marriages.

Those who showed up in the Schvneberg area to protest the weakness of the new law vowed to fight any remaining injustices in the measure. Carrying a banner that read "All or nothing," student members of the socialist PDS Party sought to raise awareness of the fact that, while representing a great social advance in Germany, so-called gay marriage is still a long way from having equal footing with heterosexual couplings.

"We are here because this new law is not enough," said 20-year-old Nura Sch|ttpelz, a Free University of Berlin political science student. "Everybody should have the right to marry. Everybody should be allowed to have or adopt children, build a family and be equal. The homosexuals are not really allowed to marry -- this is really a civil union. They should have the same rights that everybody else has," she said.

But even the steady complaints of disgruntled demonstrators could not put a damper on the festivities here. Hartwin and Karl-Heinz, who refused to give their last names to the media, showed up in white suits and were the second couple to be issued civil union status. The two men, now in their 60s, have been partners for more than 36 years.

"It's really simple," said Hartwin. "As we say in Germany: It's better to kill two birds with one stone. Because of the efforts of several German political parties, we didn't get the second half of what we wanted, but we hope that it will come in the future. Above all, we want our marriage to be a symbol. For the past year, more or less, we've been trying to get married. As you can see, we did it on the first day."

But the joy of Hartwin and his partner is bittersweet. "It's still not enough -- we want the tax and legal advantages," he says. "We're now over 60 and won't be adopting any children, but we would have liked to have been able to do it 20 years ago."