Where is the naked ape?

Why was the new "Planet of the Apes" afraid of cross-species sex? 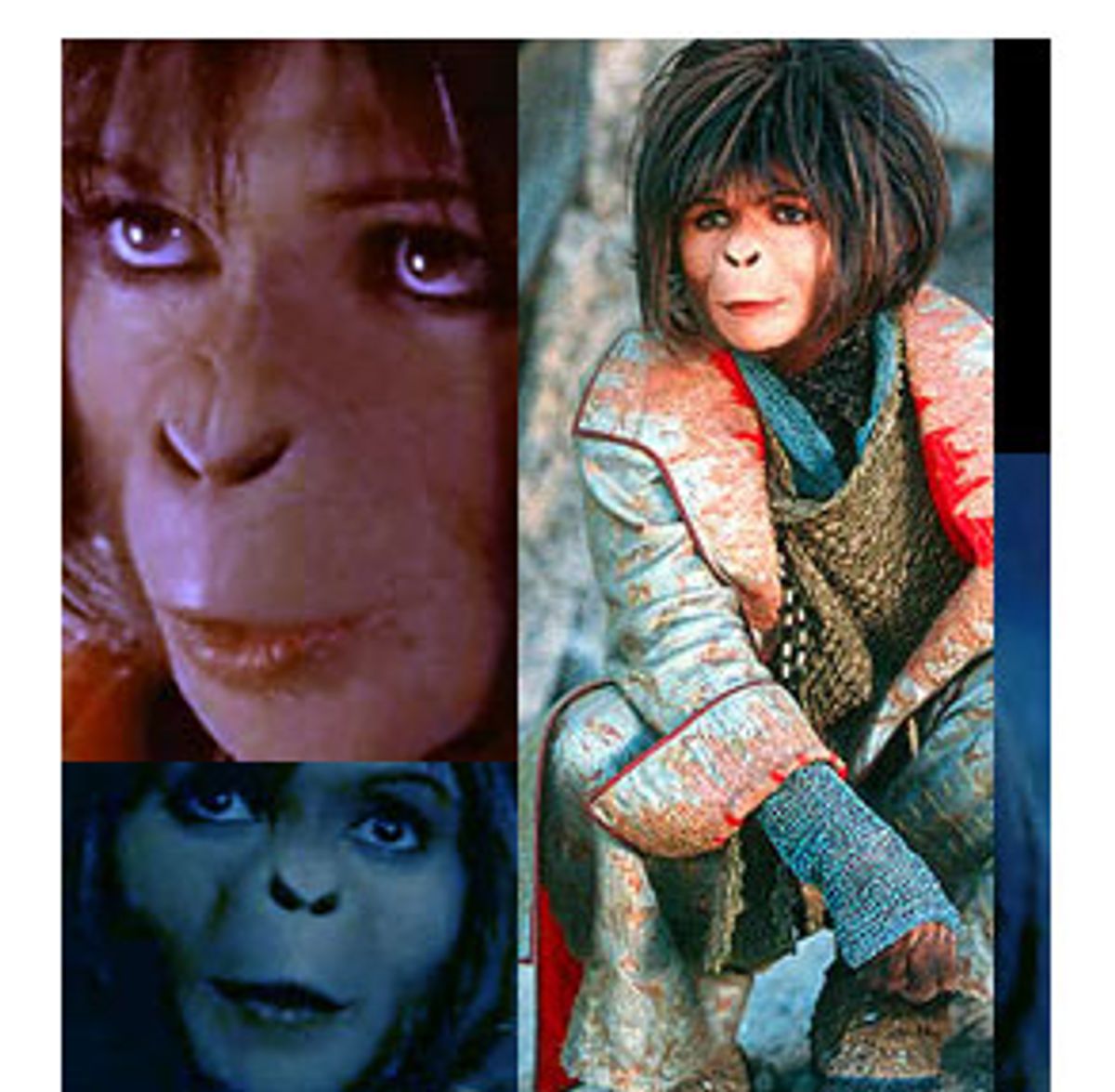 In the delirium known as keeping up with those phantoms called major current events, I recall some low-level advertising on the making of the new "Planet of the Apes." It described how many hours the stars of the picture -- those in simian roles -- had to sit patiently while their makeup was applied. I'm sure I saw Tim Roth complaining that it took another 40 minutes to have the latex and the et cetera removed. Which only left me thinking how relatively untaxing, and liberating, it was in "The Wings of the Dove" for Helena Bonham Carter to take off her clothes. (I'm all for economical filmmaking.)

America went to see "Apes" last weekend to the extent of $68 million at the box office. If you were there, and came away happy, so be it -- premature burial is back in vogue. I thought the film was not just a dismal disappointment for the Tim Burton enthusiasts, but a prolonged ordeal for anyone fond of the original series and its sense of fun. Is this truly the best modern screenwriting can do with the satirical potential in man meets ape? Doesn't anyone see or feel the begging parable on race, class and the alleged norms of sexual conduct?

Bonham Carter's role on her planet is odd, yet fetching. Not for her the vulcanized armor favored by most of the apes. Instead, she drifts around in a kind of hippy pajama suit. Her head is full of vague liberal ideas, to which she's happy to add a sniff of newcomer Mark Wahlberg. She has a nose -- squashed flat and spread wide -- for sex, and she tells Mark she finds him "sensitive." Of course, like a good American, he reacts as if stung, or as if he's always dreaded that possibility. Strike one against the dumb movie: that it can't see how smart and amusing these apes could be.

It's her jaw that gave me the clue, but Ms. B.C. could be the Virginia Woolf of the apes, with a little Bloomsbury salon up in the caves, and visions of indolent, indulgent, cross-species sex with a Mr. Wahlberg who resembles no one as much as spaceman Dirk Diggler.

I don't mean to be a spoilsport: In a two-hour movie there's ample space for battles and the very nice bounding linebacker style employed by Roth and his thugs. But there was always in the original series (it was there in the chatter of the Kim Hunter and Roddy McDowall characters) a feeling for play and interplay as one species of ape took it for granted that it was superior to another. As long ago as "Gulliver's Travels," real satire saw the stupidity of that sort of assumption, and the "Apes" franchise is rich for such work.

After all, isn't it inane that Wahlberg's lost spaceman is automatically attracted to the routine pouty babe in a ragged bikini? This happens to be Estella Warren (featured in a lot of the advertising) who has only one stunned look that says How did I get in a movie? I share her incredulity, just as I'm dismayed to realize that Wahlberg isn't much drawn to the idea of seeing Bonham Carter naked. He does plant one kiss on her ledgelike upper lip. But then his libido seems arrested by all that makeup.

This "Planet of the Apes" should have allowed for a more complete imagining of the ape's body, and it should have given Bonham Carter the chance she earned in "Wings of the Dove" and "Fight Club" to flaunt it.

But I can hear all the squeamish laments about how that would be ... dirty, or unnatural. Isn't that exactly the sportiveness that the Apes idea sets up? And isn't it why the most immediate subtext of the parable is about the adventurous mingling of blacks and whites? But someone has reasoned that if "Planet of the Apes" was going to do $68 million in its first weekend, it had to be PG-13, which means all the battles you like but rein in the sex.

It's one more sign of the times -- that we are reckoned to be incapable of handling adult material. To which I will only add that in my ideal remake Ms. Bonham Carter has a hideaway cave where she watches "King Kong" and falls asleep dreaming of Fay Wray's clothes blown away by the warm breath and leaping imagination of that first great movie ape.