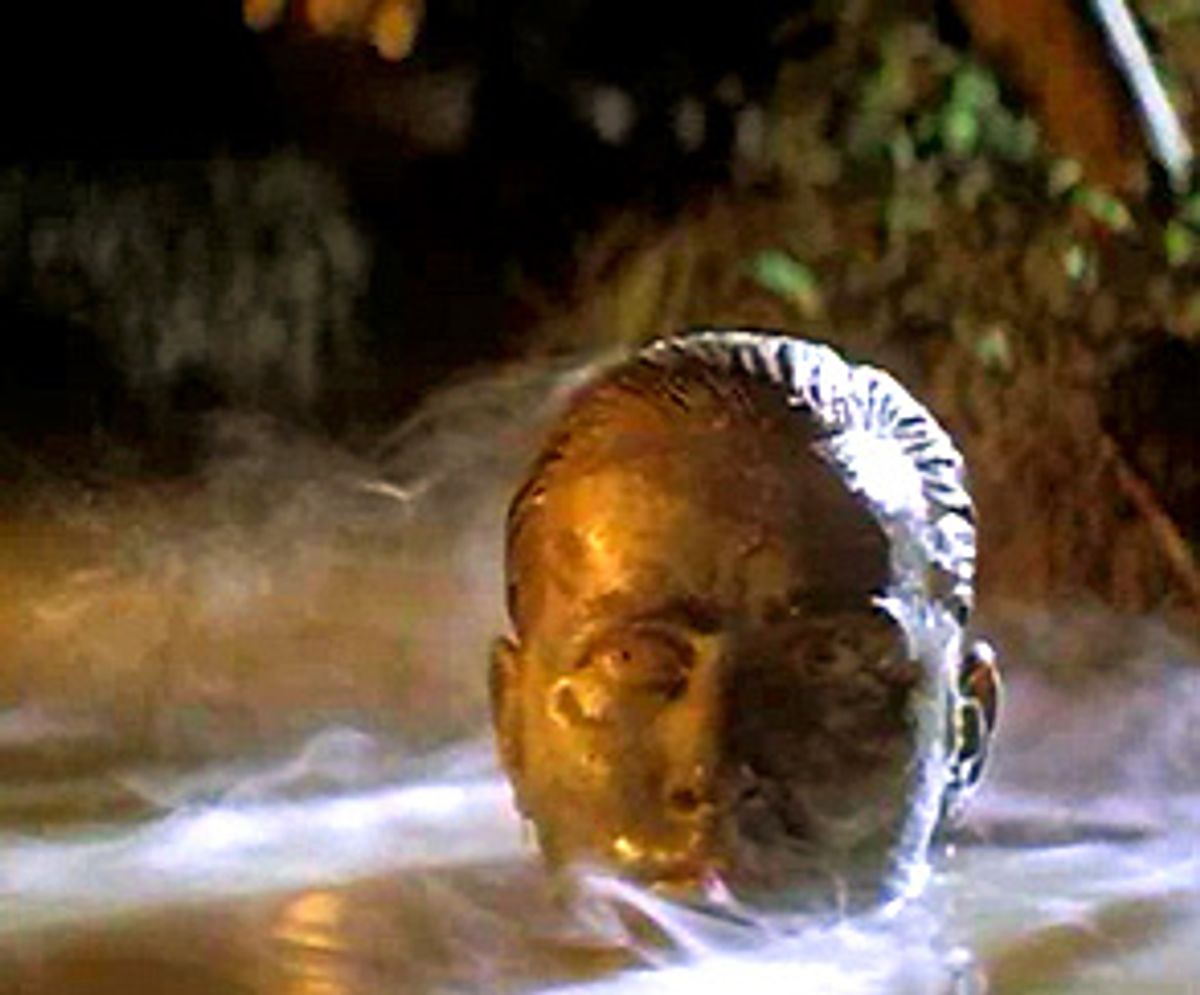 From the beginning, it was never really about Vietnam. The excitement, the anticipation that built up around the release of "Apocalypse Now" in 1979 -- and I'm not talking now about the hype, screw the hype, I'm talking about the legitimate expectations that filmgoers had for a film directed by the man who made the "The Godfather" films and "The Conversation," starring Marlon Brando, scripted by John Milius and made with an almost unlimited budget (how naive we were then about what freedom from studio control would accomplish!) -- was never really about the possibility that it would "explain" the Vietnam War to us. (It wasn't even clear that that's what we wanted -- Ted Post's "Go Tell the Spartans" had done that the year before and Brian De Palma's "Casualties of War" would do it again 10 years later, and both films remain largely unseen.) What the excitement was about was the unspoken belief that this film would put a cap on the most exciting decade in American film, that it would sum up everything that had come before and influence everything that came after.

Francis Ford Coppola's "Apocalypse Now" is, to a small minority of filmgoers, the ultimate Vietnam film, but to many more it is one of the most keenly felt disappointments of the '70s -- maybe in all of American cinema. Instead of an expansion on the themes of the failures and perversions of the American dream, we got a rambling, often brilliant, maddeningly incoherent and indecisive film that only deepened our mystery over what happened in Vietnam and that started Coppola on an artistic slide from which he has never fully recovered. To the believers, the disappointment was simply too much; they never stopped arguing that Coppola's vision had been subverted by studio interference, or bad luck, or even that Coppola had in fact delivered after all but his vision was somehow "too powerful" for America to accept. In time, all of the excuses withered away except one: that the film had been badly cut and that somehow the real "Apocalypse Now" was waiting out there to be assembled.

Now, nearly 23 years after its initial release, Coppola's film is being presented to us again by Miramax Films. This new "Apocalypse Now" has been painstakingly assembled by Coppola and editor Walter Murch, and if you thought the original was a big gulp at slightly over two-and-a-half hours, wait until you dip into this 206-minute hog feast.

Every film fan knows the story by now of how the most honored and powerful director in Hollywood, at the height of his creative powers and influence, plunged into a Southeast Asian jungle armed with a Milius script, a small army of actors and technicians (to say nothing of journalists) and a then-unthinkable budget of nearly $15 million. By the time he stumbled out 10 months later he had nearly killed two actors (Harvey Keitel, the original Captain Willard, was worn out and replaced by Martin Sheen, who suffered a heart attack), tacked on millions of dollars to his budget (which may have ended up at $20 million) and produced a truckload of film that, no matter how he put it together, had no logical or coherent ending. As late as weeks before the film's release Coppola was still giving interviews discussing whether it would be more logical for Willard to merely assassinate Kurtz or to possibly take over his jungle empire. Coppola may have felt that such philosophical musings underlined a multilayered approach to the material; in point of fact, it highlighted the tacked-on feel of the denouement, however operatic its treatment.

Articles on "Apocalypse Now" and articles on the articles on "Apocalypse Now" became a light industry, but the film itself simply couldn't support all the hype. "Emotionally obtuse and intellectually empty," wrote Frank Rich in the New York Times. In the New Yorker Pauline Kael wrote: "Trying to say something big, Coppola got tied up in a big knot of American self-hatred and guilt." There were dissenters, but for the most part those two quotes summed up the mainstream feelings.

So powerful is the tug exerted by the memory of Coppola's influence on the '70s that the new version is bound to stir up the debate all over again. This is a shame; our memory of what worked in "Apocalypse Now" -- the Wagnerian raid led by Robert "I love the smell of napalm in the morning" Duvall, the creepiness of the ongoing night battle on the river -- will only be diminished by this version. Though it may be a much clearer picture of the director's original intent, ultimately the new "Apocalypse Now" merely brings into focus the limits and faults of Coppola's -- and Milius' -- original concept. Most of the restored 53 minutes deals with Willard's stop at a French plantation before heading farther upriver to "terminate" the insane Colonel Kurtz (played by an insanely overweight Brando) "with extreme prejudice."

The segment supposedly gives "Apocalypse Now" more historical grounding, a chance to offer perspective on America's involvement in Vietnam by contrasting it with the French period of colonial rule. But ultimately what the new footage succeeds in pointing out is something that should have been obvious upon the film's initial release (and something disguised by Coppola's impressive pyrotechnics) -- namely that the analogies Milius tries to make between U.S. involvement in Vietnam and the colonial mentality of 19th century Europe in Joseph Conrad's "Heart of Darkness" are forced and facile. American policy wasn't inspired by colonial aims but by ideological ones, and Coppola seems no closer to illuminating or even understanding those now than he did in 1976, when he began the project.

Worse still is that no one connected with the film seems to have a clue that it jumps the track headed to Vietnam at precisely the point where it starts to connect with Conrad. What in the world, someone who is seeing "Apocalypse Now" for the first time is entitled to ask, have all these white-painted, nearly naked Montagnard warriors to do with our war in Vietnam? What in fact do they have to do with Vietnam's own war?

Conrad's murky but powerful message is that savagery and sloth can wipe out the fragile gains of civilization in a generation, a point of view a great deal closer to Rudyard Kipling than most liberal admirers of Coppola are willing to admit (though in fact it is probably precisely what drew Milius to the material in the first place). Fair-minded observers who have watched the torturous development of Third World democracies in our time would probably grant a certain amount of prescience to Conrad's vision, but even at that what does all this up-the-bloody-river stuff have to do with the war in Vietnam? In many respects the American experience in Vietnam was the opposite of the Conradian colonial experience, with a younger, arguably immature nation involving itself in a civil war with a country that was civilized when North America was in the Stone Age. Or do Coppola and Milius somehow feel that the war was caused by the backwardness of the Vietnamese? No wonder Coppola couldn't find a suitable ending for this mess; there isn't one, and the 50-plus minutes of added footage help only in the sense that by the time the audience gets to Kurtz it is willing to settle for damn near anything that gets the picture over with.

"Apocalypse Now" is still a great visceral kick, and the staggering energy that went into this doomed project can, combined with Coppola's visual artistry and a truly great soundtrack, keep you from seeing through a script that has no real heart, dark or otherwise. In a way, the '70s spoiled us. The brilliance of the best American films of the decade -- "The Godfather," "The Conversation," "Taxi Driver," "Nashville," "Shampoo" and "The Last Picture Show," to pick just a few that never stopped reverberating -- led us to think that film might be something more than a national pulse check. It wasn't enough that these films caught (and captured) the temper of the times; we wanted them to articulate our mood, to show us a way out. This is always a mistake. When artists believe they can resolve our problems as well as illuminate them, they become preachy or, worse, messianic.

Ultimately the new "Apocalypse Now" will leave you thinking about the failure of American film, at a crucial and agonized point in American history, to capture the national zeitgeist. As a filmmaker Coppola was, at peak, one of our great visionaries. As a philosopher, he's still out there in the jungle.