We can't get upstaged anymore by Clinton's uptown act. Get Colin and Condi ready: It's time for Operation We Have to Get Black People to Like Us! 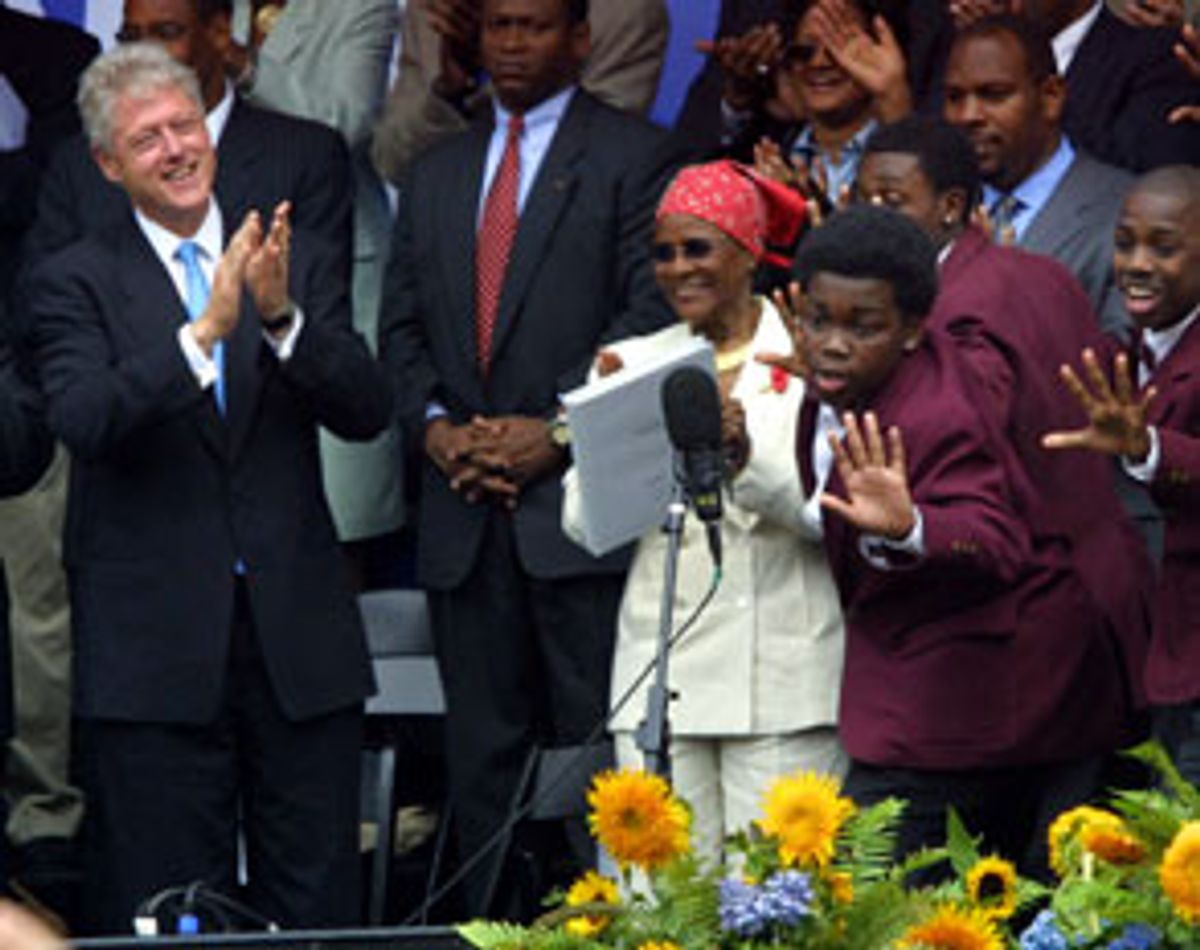 To: The President
From: Andrew H. Card Jr., Chief of Staff
Re: Trouble on 125th Street
cc: Karl, Karen

First the good news. Don't know if you had time to do any extra reading this week (Dick says you're plowing through the new "Dilbert"), but once again we've smacked a dinger in the bottom of the ninth. With the August recess upon us, we nailed down the energy bill, snagged a killer poll (See? I knew one would come along that we'd like) and even struck a compromise on the patients' bill of rights, no thanks to McCain, of course. (Have a great vacation, John -- hope it's in Mt. Etna.)

Now the bad news. Put on your flak jacket, boss -- we're going to war. According to our in-house radar, we're about to wage one honey of a battle, and I'm not talking about Congress or the Balkans or that psycho-sandpit called the West Bank. I'm talking about Harlem.

Even as the media blows hot and cold with us, guess who's gettin' a big ol' wet one right on his pale, white, courtesy-of-McDonald's derrière? You bet your blow-dryer: Bill "Pardon Me" Clinton. There he was, all over the news, escorted by Chuck "I'm One Hip Hebrew" Schumer, struttin' down the rope line, high-fivin' his new neighbors, looking for all the world like the Mandela of Manhattan.

Well, as Duke Ellington pointed out, anybody can take the A train, and if we want to shore up our African-American base (Karl: We have one, right?), we need to toss some gridlock into Gotham Bill's checkered taxi motorcade. Rummy says we should take out the whole city (I'm beginning to think Don should switch to decaf), but Dick suggests a subtler strategy. So here she is -- code-named "Operation We Have to Get Black People to Like Us."

YO, NEIGHBOR!: "Well, we're movin' on up." That's right, even while Bubba does Broadway, we're scouting locations for our own office -- right next door. Think of us as Mr. Roper to Clinton's Jack Tripper, only crankier. (We've already ordered a dozen boomboxes -- extra loud.) In the meantime, if we want to sound genuine with the locals, we need to familiarize you with the jargon of the 'hood. Starting today, homespun is out, "homeboy" is in. We'll show Black America that you're as hippity-hop as Johnny Mathis; that you can "get jiggy" with the best of 'em (Karl: still waiting on a precise translation of "jiggy"). You can start immediately. At your next photo op, tell the reporters that the Senate better be "down with" our energy plan or you'll "cap 'em" (actually, Dick says you can use "cap" with anybody but the NRA guys). If you need some extra pointers, I'll messenger over some "Fresh Prince of Bel-Air" tapes. Will Smith is "the bomb." (Don't panic -- that's a good thing.) Yes sir, BC may have been America's first black prez, but believe it or not, boss, you're the one who's "phat and stoopid." As Ari likes to say, bust a move.

L.L. COL P: I thought someone had laced my latte with funny mushrooms last weekend when I opened the papers to see a shot of our esteemed secretary of state, Colin "Dove Bar" Powell, singing karaoke to the Japanese foreign minister. He's down to his last 9-millimeter marble, I thought to myself. But check out this whacked bit of polling: The next day, General Softee's numbers skyrocketed. The point? If a Nilla Wafer like Clinton can light a fire under the sistas in Upper Manhattan, we can do even better with our genuine five-star, homegrown homey. Dick says we order the Warbling Warrior to take his lounge act on the road, scheduling stops for him in every urban-based Ramada from Mobile to Motown. There's more than one way to whip the inner-city masses into a frenzy, and if Puff Colly does the trick, maybe we can even convince Condi to join him on tour! (We know she can figure skate and play piano, but can she sing?) You don't have to be Berry Gordy to imagine this new-millennium resurrection of Ike and Tina. Proud Mary, look out!

By the way, we're not going to make a performing seal of the guy. I mean, it's not like we want to shove him onstage for Amateur Night at the Apollo (Karen: Can we?). But I do know that the more time Powell spends wowing the cocktail circuit with "I'll Be There" and "Killing Me Softly," the less chance he has of screwing up our OPEC interests with the hanky-heads in the Middle East.

J.C. SUPERSTAR: So Clinton's got Harlem, we've got Watts -- Congressman J.C. Watts, that is. OK, so maybe no one can match Slick Willie's oratory on the Baptist pulpit, but can he say he QB'd back-to-back national championships at the Orange Bowl? These inner-city kids love sports, and J.C. was an honest-to-God superstar at Oklahoma! And what sport did Bronco Billy excel in at Yale? The 100-meter panty raid through the Chi Omega sorority house, I bet. Furthermore, sports isn't the only thing J.C. can trot out to win the hearts of our young people. His work on the faith-based initiative, for example, is one sexy bit of urban catnip. I mean, if you were a 16-year-old boy from Harlem, how would you rather spend your day: playing a dopey little pick-up game with a former president of the United States or sitting down with a true Republican hero to discuss the merits of community volunteerism and the joys of abstinence? Pack up your sax, Billy-boy -- this is one battle you've already lost.

SECRET WEAPON TIME: If all else fails, we've assembled a little team of infiltrators down here who, résumés in hand, are all set to board the northbound Metroliner for a little job-hunt expedition in Clinton Country. I don't want to reveal more about this secret squad in writing (in-house memos, of late, have been leaking like Strom at a keg party), but I'll give you a few hints about this special elite force: big hair, wide hips and a weakness for bad boys. 'Nuff said.