If this is royalty, get me out of squaresville. 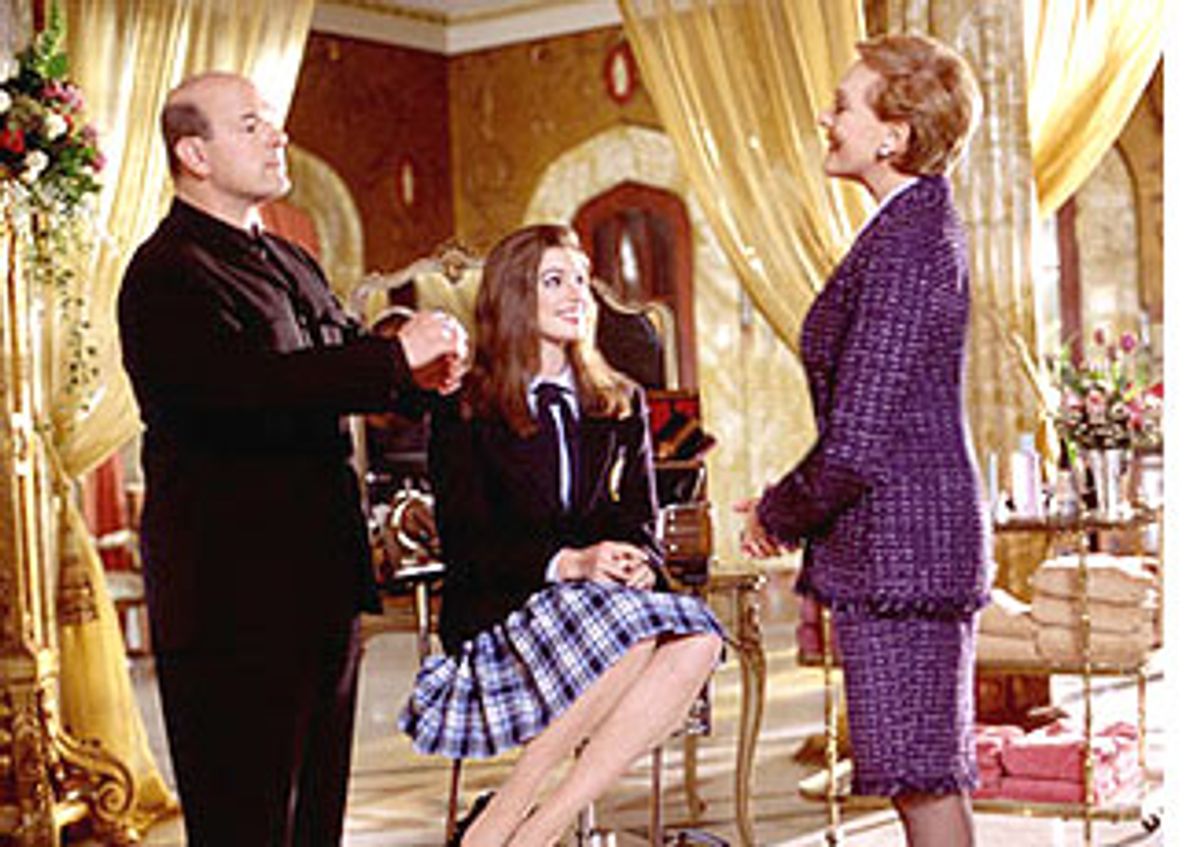 Garry Marshall's "The Princess Diaries" is so aggressively bland and inoffensive that it practically recedes from the screen -- it's like an obsequious houseguest who keeps reiterating that, really, we mustn't go to a lick of trouble on her account. After a while -- about eight minutes -- its very niceness becomes a negative virtue. It desperately needs an exploding teapot or a poisoned crumpet to blast its assertive innocuousness to smithereens

Fat chance. Marshall, particularly in pictures like his most recent hit, 1999's "Runaway Bride," has proved himself to be a master of the shiny but colorless entertainment. But "The Princess Diaries" carries an additional dubious distinction: It stars Julie Andrews, whose waxed-fruit diction and nickel-between-the-buttocks carriage stop well short of campy fun. Andrews' performance is so shellacked and precise, in that quintessential Julie Andrews way, that it makes you want to run out of the theater and roll around in the dirt.

Here, Andrews doesn't Windex us with her squeaky-clean singing, nor does she use curtain material to make Tyrolean play outfits for a brood of Austrian ski bums in training. She does something much worse: She plays the imposing Clarisse Renaldi, queen of a tiny European principality known as Genovia. One day Queen Clarisse shows up unannounced in San Francisco to pester (politely, of course) the heir to the throne into taking over the responsibilities of ruling her fleabite of a country. Her victim is wavy-haired, bespectacled, coltishly awkward 15-year-old Mia (Anne Hathaway). Mia lives happily with her zany fun-loving artist mom, Helen (Caroline Goodall), who likes to do stuff like don a smock and throw darts at paint-filled balloons secured to a giant canvas. As John Lennon once said, genius is pain.

Mia isn't keen on the idea of being a princess, even if it means having her own limo and chauffeur/bodyguard (Hector Elizondo), so she can be driven to her swanky private school in style. You see, Mia never knew her father, who had been quietly and amicably divorced from Helen since Mia was a baby. Nor did she know that he was any kind of royalty. (He nobly left his wife and daughter to take over the throne when his older brother abdicated -- and I swear I'm not making this up -- to join a religious order.) Still, he always sent nice little presents on Mia's birthday, Fabergé carousels and the like, and paid her school tuition. Why stir up the pot by asking questions about a guy like that?

Helen, who has always wanted Mia raised as a normal and not a royal, nonetheless urges Mia to give granny Clarisse and her patented princess-molding method a chance. So we get scenes of Clarisse sweeping nobly into a room like a lithe ribbon of crisp crepe and chiffon, her clearly patrician feet shod in slender Ferragamo shoes -- followed by clumsy Mia in her Doc Martens, knees knocking and arms flailing. She, of course, falls down. She spills tea. She breaks things. As such, every joke in "The Princess Diaries" is wet and spongy instead of dry and crisp. As Mia flails through the training course, Clarisse looks at her sternly, her mouth set in a hard little line that can only mean her inner Mary Poppins will have to sooner or later break open, like an alien pod from space.

And, of course, it does, but the details are too horrific to go into here. Let's just say that the sight of Andrews biting gingerly into a corndog and proclaiming it rather delicious was really more than I could bear.

Most of Mia's transformation from clumsy schoolgirl to glamour-girl royalty involves ditching her eyeglasses for contacts (a novel idea since at least 1968), straightening her only slightly frizzy brunet curls (the message here is clearly "Curly hair bad! Straight hair good!") and layering arcs of blue eyeshadow around her already-gorgeous eyes (a novel idea since at least 1932). At the end of it all, she doesn't really look prettier. Just older and less distinctive, like a Sela Ward in training. But if you're looking to be a princess, not rocking the boat too much is a good thing.

In the end, "The Princess Diaries" is all about taking responsibility and choosing the path that will allow you to do the greater good for the world. It's squaresville all the way, except for one young character, Michael (Robert Schwartzman), the brother of Mia's best friend (Heather Matarazzo, of "Welcome to the Dollhouse"). He goes to Mia's school, and he's also a part-time grease monkey at the local garage and a keyboard player in a band. He has a crush on Mia, but she doesn't know he's alive; she's much more interested in the blond BMOC Josh (Erik von Detten).

I can't exactly tell if Schwartzman is a good actor; he plays the character of Michael a little stiffly, almost as if, like a teenager forced to go on vacation with his parents, he senses the absolute necessity of keeping his cool at all times. I can say that, like the 13-year-old girls in my row who cheered midmovie when he reappeared after too long an absence, I came under the spell of his mischievous dark eyes and Small Faces haircut. He's Tiger Beat pinup material for sure.

And at the very least, Schwartzman comes off like a human being in every one of his scenes. Hathaway tries hard, but her role (as written in this script by "Coyote Ugly" screenwriter Gina Wendkos) is flimsy; her character is mostly a package of tics and broad qualities that paves the way for the movie to spill forward to its inevitable conclusion.

And how do you solve a problem like Julie Andrews? It's only right to point out that Andrews looks damn good, if a bit too winkly and twinkly for my taste. The biggest complaint I have about Andrews' performance is -- well, that she's Julie Andrews. The role might have worked if Marshall had directed her to have a little fun at her own expense. As it is, though, she plays this character like the international treasure that she has, over the years, been groomed to be. Andrews is queenly all right, and she beams upon us, her lowly subjects, with more wattage than any human being should be allowed to carry without a license. She doles out spoonful after spoonful of sugar, none of it necessary considering that "The Princess Diaries" is such weak medicine. Sure enough, it goes down. Keeping it down is another matter.