The newest installment in Jackie Chan and Chris Tucker's cop-buddy franchise isn't any good -- but it's no chore to sit through either. 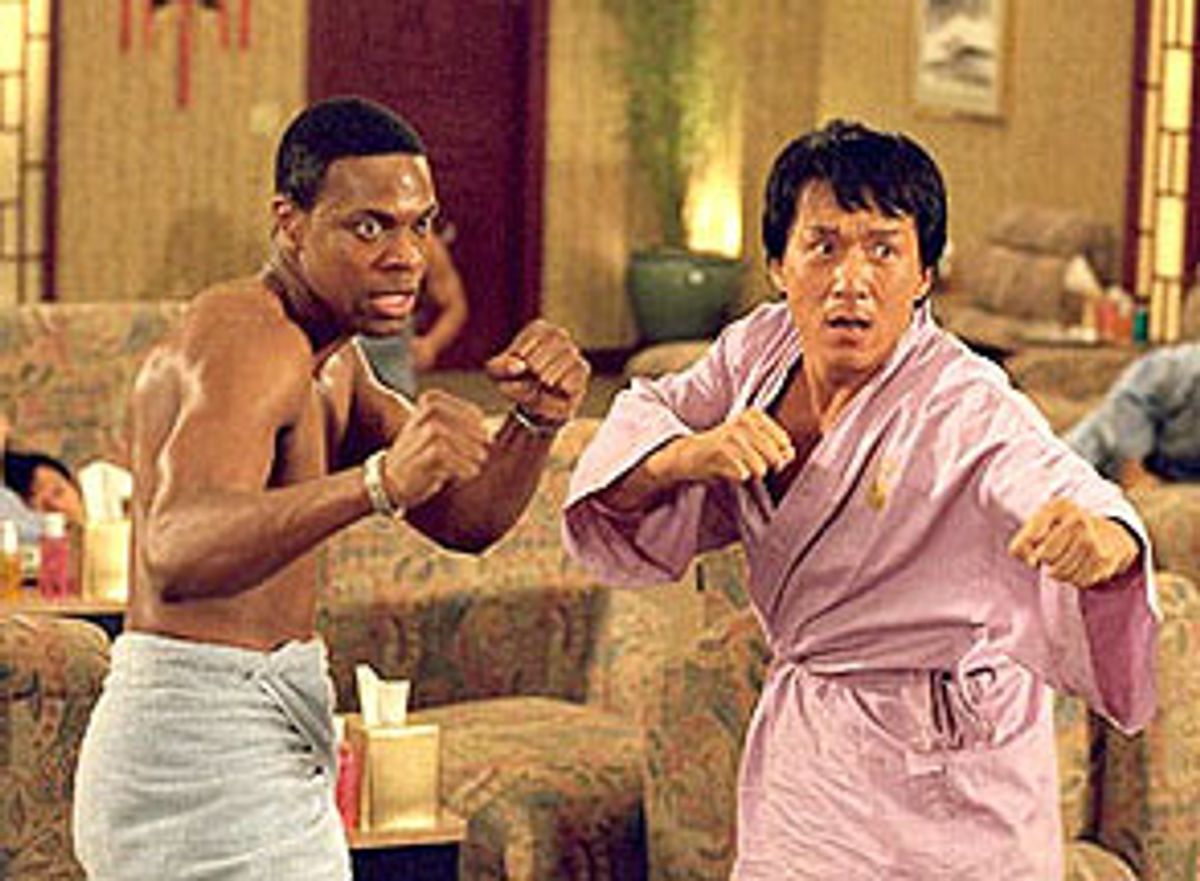 In the midst of "Rush Hour 2" there's a gag that's funnier than any of the movie's other fish-out-of-water routines. In this second installment of what's sure to become the next cop-buddy movie franchise, it's Chris Tucker's LAPD detective who's the outsider. He accompanies his new Chinese police detective pal, Jackie Chan, home to Hong Kong, where they immediately get involved in a counterfeiting and smuggling case. At one point -- and I'm not giving anything away -- Chan believes that Tucker has been killed. Dejectedly driving home, he turns on the radio and out comes Puff Daddy's tribute to the late Notorious B.I.G., "I'll Be Missing You."

As Chan listens he starts doing a herky-jerky version of hip-hop head and shoulder dips. That's funny enough. But what's really funny is the way the moment punctures the sanctity and sentimentality that always surrounded Puffy's tribute, and the obviousness of Chan remembering his dead buddy with this song. For a brief moment, the movie provides the naughty pleasure of laughing at something you shouldn't -- like giggling at a funeral.

That's by far the funniest moment in "Rush Hour 2," and while the rest of it isn't really any good, it's certainly no chore to watch. Opening the movie now, with the summer movie sweepstakes winding down, may be a very shrewd move. By this point in the summer, I don't think it's just critics who are suffering from blockbuster burnout. "Rush Hour 2," in its crummy B-movie way (albeit with the trappings of contemporary expensive crummy B-movies), doesn't make you feel like you need steroid stamina just to sit through it. The dialogue is baldly expository, Ratner doesn't have any natural feel for performance or camera rhythms and Chan shows more chemistry with Don Cheadle in the actor's brief cameo than he does with Tucker. But the movie isn't exhausting, and it doesn't make a big deal of itself, either.

Unfortunately, though, it doesn't make a big deal out of some of its performers, either. As a Donald Trump-like tycoon, Alan King gets no chance to show off his wry smoothness (he's always been a more understated performer than his size would suggest), and as the triad boss who was also Chan's late dad's police partner, the formidable Lone is wasted as the movie's prime slickster baddie. Where has John Lone been, and is this all Hollywood can think to do with one of the suavest actors to have hit the screen in the past 20 years?

The plot of "Rush Hour 2" stops mattering long before the ending, but then, nobody is really there for anything more than to see Jackie Chan kick and bash and Chris Tucker talk trash. The movie does some unfunny recycling of the first picture's gags ("Don't ever touch a Chinese man's CD!"), which is not to say that it's never funny. Tucker is so relentlessly in your face that not laughing at him never seems to be an option. He drags the laughs out of you by sheer force of will. It's not particularly clever, but watching him make his selection in a Hong Kong massage parlor ("Don't get in front of a black man at a buffet") or take the stage in a triad karaoke bar to sing "Don't Stop 'Til You Get Enough" and not cracking up is like to trying to ignore that open bag of potato chips across the room. Just give in and make your life easier. Tucker gets laughs out of bits that have been done to death, like his claims of racism while rolling craps at a Vegas casino. But he takes the familiar comic outrage a step further when he dedicates a throw of the dice to Nelson Mandela's 27 years in prison. Most of the jibes he and Chan are given should make you groan -- "I'll bitch slap you back to the Ming Dynasty!" "I'll bitch slap you back to Africa!" Coarseness wins out, though, and I'd be lying if I said I didn't laugh. (The biggest laughs come during the outtakes that roll alongside the end credits, particularly Tucker's inability to pronounce "gefilte fish.")

Chan is still one of the most amazing -- and one of the most charming -- physical performers the movies have given us. To him, every object in the physical universe is simply a means of getting from one place to the other. And if that means he has to slide through the narrow opening in a cashier's window as smoothly as soap slipping through your fingers, or run along the side of a moving 18-wheeler while dangling from a cable ... well, some days can get pretty rough. (If somebody could ever conceive a domestic comedy for Chan, it might get huge laughs from his answers to that quintessential sitcom question, "And how was your day, dear?") Chan's physical feats are funny precisely because he isn't cool. You can see the pop-eyed fear in his face with the onset of each new danger as well as the "Oh hell, now what?" exasperation. He seems to be amazing himself as well as us. And he's one of the few performers who are truly lovable (and loved) without ever being icky. You can feel a collective smile going up from audiences when he's on-screen.

The first "Rush Hour" gave Chan his biggest American success (too bad it wasn't the winning "Shanghai Noon," a friendlier, more enjoyable, better picture). But seeing the way Ratner shoots him may give you pause. Considerations are clearly being made for the beating that Chan's body has taken over the years. His physical condition, though, clearly has nothing to do with Ratner's ineptitude in framing the shots -- we often can't see Chan's entire body or the physical layout of a room whose seemingly innocent objects will become his weapons. And Ratner's cutting moves us from one stunt to another before we've had time to savor the first. Chan in motion is speed personified; we don't need quick, flashy editing to rev it up any further. If musicals were still being made, or if dance were still an integral part of movies, nothing would benefit action movies more than directors who had learned how to shoot physical performers. (Flipping the channels last week, I came upon a dance sequence in the old Dean Martin and Jerry Lewis comedy "Living It Up" that was shot with less fuss and more craft than anything I've seen in an action movie in years. And if you can keep the movements of Lewis in full frame, you can probably do the same for Chan.)

There's a new addition to the cast, diminutive Zhang Ziyi as the chief villain's chief muscle. I don't want to fall back on an ethnic stereotype, but there's no getting around it: Ziyi's delicate, tiny features really are that of a porcelain china doll's. The gag here is that she's thoroughly eee-vil. "Crouching Tiger, Hidden Dragon," which added a layer of art-house respectability to the visceral martial-arts choreography Hong Kong directors like Tsui Hark have been turning out for years, really came fully alive only when Ziyi was on-screen. "Rush Hour 2" perks up, too, whenever she appears. Dressed in the chicest leather outfits, she transmits an ominous stillness that unleashes itself in unbelievably limber high kicks, many of them delivered straight to Tucker's face. Damned if each blow she lands on him doesn't get big laughs. And Tucker plays it exactly right: more disbelieving than hurt, and nearly silent, as if she's knocked the power of speech right out of his noggin. Zhang Ziyi is the classiest thing in "Rush Hour 2." She's malicious, delicious, memorable in the manner of, say, the greatest Bond-movie villains, and with an enormous presence that belies her size. She's the hot chili flakes on this buddy-movie pizza. Z.Z. She's the top.