She was an American girl

Maybe, he thought, my life is going to be all right now. 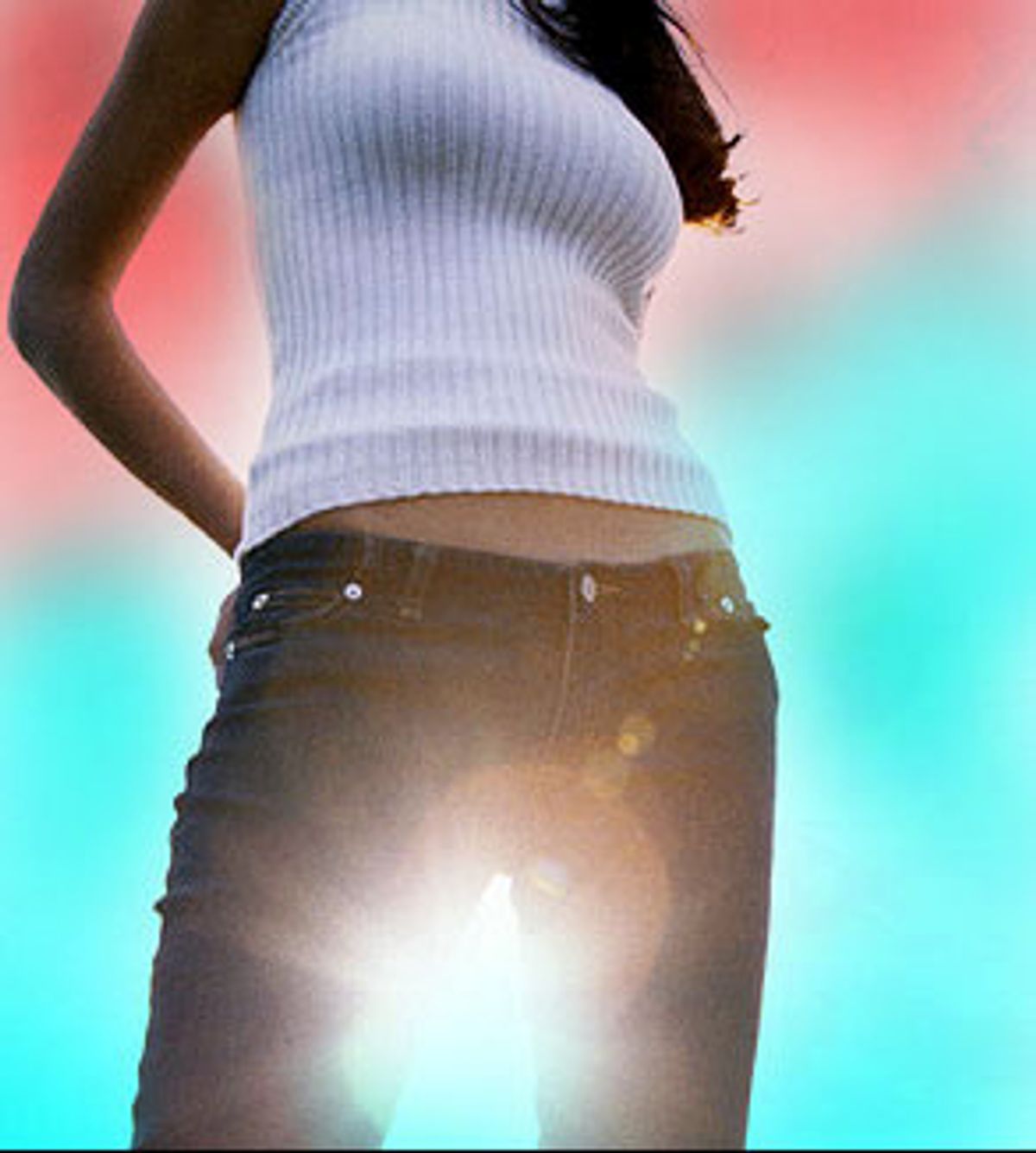 She was a quiet and reserved Midwestern girl of 29 years and wore an aqua blue print dress that seemed to enjoy wrapping around her full breasts and thin hips and splitting up the front to brush against a pair of tanned, healthy legs. Her hair was blunt cut, accentuating her sharp, Norwegian nose and strong cheekbones. She didn't need makeup to look good and she knew it.

Recently separated from a walkaway husband who must have found something exquisite to walk away to, she was pleased, maybe thrilled, that her new neighbor -- whom she'd met at the university and in nightclubs several times, flirted with quite openly and gotten drunk with at a party once and ended up fooling around with in the middle of the desert until the sun came up but who had never called her since -- was now ringing her doorbell.

It was more than two months since they'd been kissing and groping in the desert. If she was angry that he hadn't called, she didn't let it show on her face.

"Hi, sorry to bother you. Do you have any sugar?" he asked, wiping the sweat from his brow, pushing back a heavy lock of damp dark hair. Actually, he'd been out watching the American middleweight and lightweight boxing championship matches at a hotel bar for the past three hours and was tipsy, and he'd thought hers was his villa as they were only two courtyards apart and, like the rest of the villas on that block, were identical, and was confused to find the door locked, and so to avoid looking stupid when he realized what he'd done, he'd rung the bell, just in case his neighbor had seen him from the window when he came into the courtyard slamming the gate behind.

The apartment was well appointed with her and her estranged husband's furniture: couches, chairs, a dining room table, an Arabic numeral gold clock, a TV/VCR, a stereo, 2-ton window air conditioners, a couple of bookshelves, knockoff Persian rugs, Balinese knickknacks, fake Egyptian parchment -- the whole tacky Gulf expatriate layout that tax-free paychecks seem to inspire in people who never thought about furniture before or traveled farther than Florida. Everyone, he reckoned, had been to India: No household lacked the famous batik "Elephant With Mahout." This couple had been to Nepal as well, evidenced by the cheap imitation brass meditation bell (swung counterclockwise only).

"Would you like a glass of wine with your sugar?"

"I just finished cooking some lasagna if you're hungry."

"In fact I just ate, thanks. But the wine would be great."

She handed him a short tumbler of white wine and sat next to him on the couch. "Gone With the Wind" was playing on the VCR a few feet in front of them. Rhett was just discovering that Scarlett, because of her roughened hands, must have been working on the plantation. He was upset.

They watched the movie. He talked about Georgia, his upcoming vacation; she talked about Minnesota, her vacation. They drank some more of the almost-chilled, generic white wine poured from a plastic spout on a foil bag inside a cardboard box. It didn't remind him of anything, the wine. He took a handful of Doritos from the bag on the kitchen table to see if the wine might gain some body commingling with the artificial barbecue flavor. It didn't. But it was another drink. And there he was.

He noticed that when they were in the kitchen she wiped every surface after use, and when he spilled a drop of wine on the floor she promptly wiped it clean. He sensed he was "in her territory," especially in the kitchen. In fact, he was certain she waited for him to leave first so that she could clean up after him. Then he noticed how "arranged" everything in the house was, from her estranged husband's signed photographs of baseball greats to the ingenious vertical wire baskets holding an alphabetized videotape library (labels out); even the array of plastic zoo animals on the study desk had been carefully placed into a close semicircle, as if readying to pounce upon some nonexistent prey. "Fastidious" is the word that came into his mind. Like her smile and her bright teeth. They returned to the couch with more wine.

"So, how come you never called?"

"I knew you were going to ask that."

"Then you probably have a good answer."

"I have a lot of answers but none of them are very good. And looking at you now, I don't know. I was stupid and you are very beautiful."

"Then why were you stupid?"

They were sitting a few inches apart. He liked seeing her strong profile backlit by the Civil War battle scene. His arm was draped over the back of the couch, almost touching her bare shoulder.

"Come on, you can do better than that." Her tone was serious. She wanted a decent answer, so he gave her the best one in his book.

"To be honest with you, Annette, I am something of a chronic depressive. I go through depressive cycles several times a year. Sometimes they last for more than a month and all I do is go to work, come straight home and sleep. Or if I can't sleep, I drink. I can't stand to see anyone, and I lose all interest in sex, or anything else, for that matter. But remember how much fun we had that night at the party and going out to the desert?"

"Yeah. It was great. We hitchhiked home and got a ride with that boy from Doha and you told him I was your wife and that the reason you had the guitar with you in the middle of the desert is that you were playing music at a wedding ceremony." She was laughing now, her fastidious row of white teeth reflecting the red and orange glow of Charleston in flames.

"Did he believe me?"

"I don't know. You were talking Arabic."

He laughed. "Well, anyway, I was on the zenith of my upswing that night and I crashed the next week." He was a good liar and knew when to quit. It broke the tension and they talked for an hour about her breakup, his breakup, his child, the loneliness and rejection; and somewhere during that hour, he put his hand on her shoulder and began gently stroking it.

By the time he took her chin in his hands and drew her face in close for a kiss, the better part of Dixie was a smoldering heap of ash. Ragtag freed slaves and scorched-faced white refugees were making a weary exodus to he knew not where. He was thinking these things as he kissed her -- wondering if there were any connection in all this, and the fact that Scarlett had just spotted her ex-slave hands and had run to greet them and there was the feeling in that Hollywood mock Southern smoky battle-scarred dirt road that everything was going to be all right. Maybe, he thought, my life is going to be all right now.

They had more wine and they'd slid down off the couch onto the machine-made Persian carpet when he said: "I know how lonely you are. I know what you do at night." He waited for her to throw the wine in his face, slap him or show him to the door. The little risks relieved for a while the ever-encroaching tedium that circled him like zoo animals, ready to pounce.

"I mean I know how lonely it is when a relationship ends and you told me that night in the desert that you hadn't slept with anyone since your husband left you and that was five or six months ago."

"I must have been drunk."

"Yes." She kissed him hungrily and finished unbuttoning his shirt and ran her hands over his chest.

When they paused, he followed his instincts and resumed the inquisition. "Just answer one question."

"Yes. And that's it. No more questions."

"How many times a week?"

"I'm not going to answer that."

"At least three times a week, I bet. I could tell by the night in the desert. I was playing with you but you never came. I knew then and I've been thinking about it ever since. I bet it's every night during a good week."

She gave him a shut-up kiss.

"Do you use your fingers, or something else, or do it in the shower?"

She kissed him harder. He kept breaking the kiss to ask more questions.

"Uh-huh." She was squeezing and pumping his cock in her hand now.

"Uh-huh." The purr was now a low soft moan, her head turned staring at his exposed loins.

"Would you let me watch you sometime? Would you like that?"

He moved his hand down between his legs and took over the action, watching the rapt expression on her face, her eyes wet pools glinting in the crackling snow of the dead TV screen.

Joe Kuhl teaches English. He is author of a short story collection, "Rude Ethnographies: Travels on the Dark Side of Arabia."