As the head of the Major League Baseball Players Association, he challenged the assumptions that players are chattel and that labor unions have no place within sports. 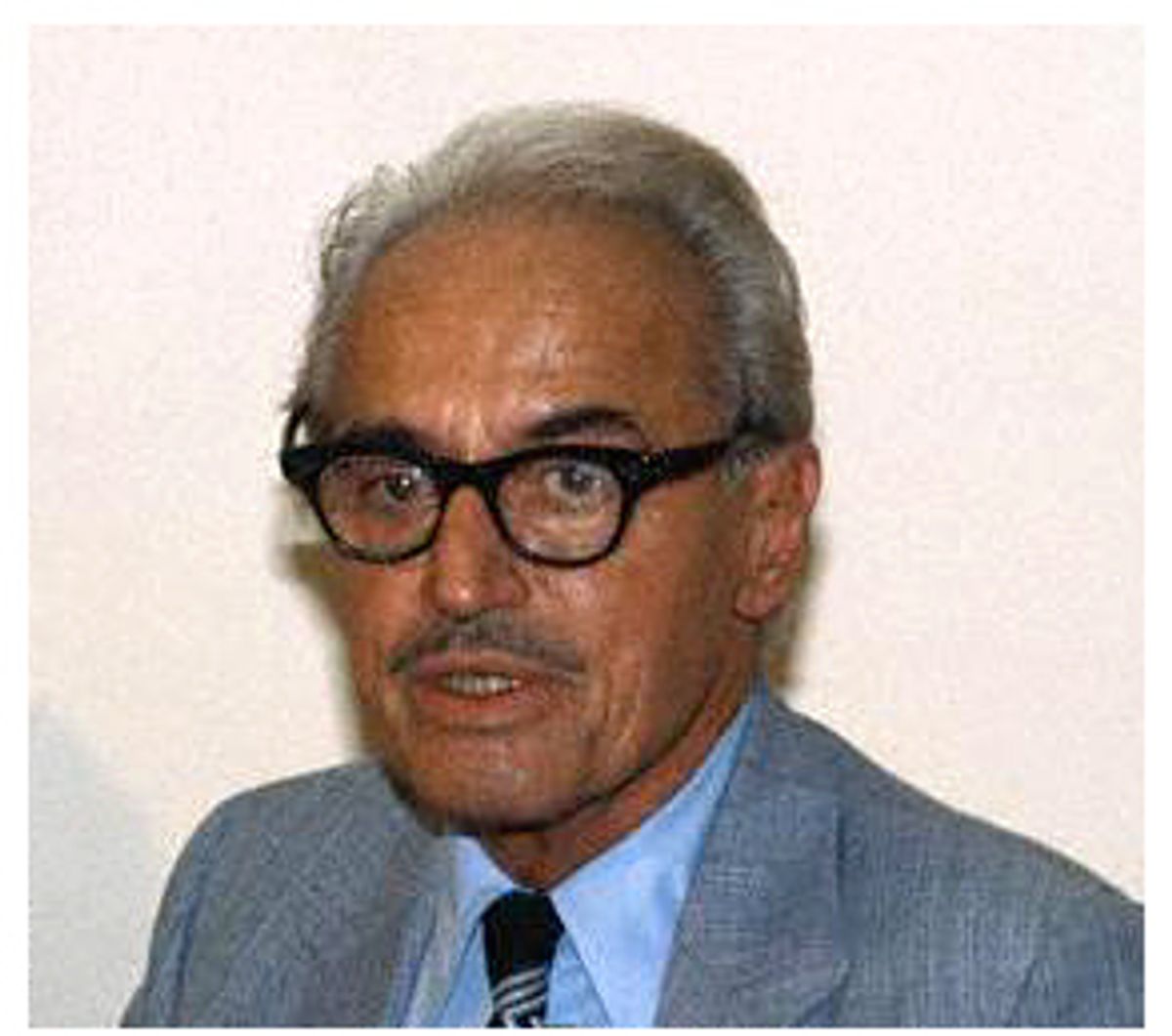 Chances are, Marvin Miller didn't receive a thank-you note from Alex Rodriguez last winter after the shortstop signed a 10-year, $252 million contract to play for the Texas Rangers. That's a shame because Rodriguez, the highest-paid athlete in the history of team sports, owes nearly every dollar he banks to Miller.

These days it's impossible for sports fans to wrap their ESPN-addled brains around the concept of underpaid athletes. But in the not-so-distant past, professional athletes were grossly underpaid relative to the enormous revenue their skills generated. Most took second jobs -- selling insurance or cars -- during the off-season. Worse, the teams they played for owned them, quite literally, for life. About the only thing an athlete could do about it was, well, play.

Marvin Miller fought to change that. As executive director of the Major League Baseball Players Association from 1966 to 1983, he challenged the assumptions that players are chattel and that labor unions have no place within sports. Going head-to-head with team owners and commissioners, he emerged with victory after victory that benefited the players. Free agency, salary arbitration, pension rights: Miller ensured that players gained workers' rights and were compensated commensurate with their place in the game. By the time he retired, Miller had created one of the most powerful unions -- sports or otherwise -- in America.

As oral historian Studs Terkel once wrote, Miller was "the most effective union organizer since John L. Lewis."

To connect Miller solely with baseball, however, would be to understate his role, because the systemic changes he initiated were emulated by other sports leagues. By making it possible for all athletes to exercise their rights, Miller tilted the balance of power in sports. Last year, the Sporting News acknowledged Miller's significance in its survey of the "100 Most Powerful People in Sports for the 20th Century." Miller ranked fifth.

To give an example of what players were up against, 35 years ago, during spring training in 1966, Los Angeles Dodgers pitchers Sandy Koufax and Don Drysdale staged a joint holdout. Koufax, the most dominant southpaw of his era, had gone 26-8 in 1965, with 382 strikeouts. The imposing Drysdale was 23-12, with 20 complete games. The Dodgers had won two of the last three World Series.

Seeking a multiyear contract, Koufax and Drysdale hired an agent to help them negotiate with owner Walter O'Malley. They got nowhere. O'Malley, who'd made untold millions by uprooting the Dodgers from Brooklyn, N.Y., in exchange for a sweetheart deal in Los Angeles, refused to meet with the pitchers' agent. The pair were forced to cave and signed one-year deals.

Why did two future Hall of Famers have little more bargaining power than, say, weak-hitting catcher Bob Uecker? The answer: the reserve clause, which allowed baseball owners to hold down salaries and control where players could ply their trade; they "owned" the players' rights in perpetuity. That's because Major League Baseball operates as a monopoly, a "right" established in 1922, when Supreme Court Justice Oliver Wendell Holmes decreed that baseball was not involved in interstate commerce and thus not subject to federal antitrust laws. (Baseball remains the only professional sports league with this antitrust exemption.)

Born in the Bronx and raised in Brooklyn -- yes, he grew up a Dodgers fan -- Miller worked exclusively in labor. He had stints with the National War Labor Board during World War II, the International Association of Machinists and the United Automobile Workers. In 1950, Miller became a staff economist for the United Steelworkers of America. By 1966, he was chief economist and assistant to the president of the Steelworkers Union, then the third largest in the country.

Miller says that when he was offered the baseball post in 1966 he almost declined because he was asked to hire Richard Nixon as the union's legal counsel. Miller won that battle, but he soon encountered more serious obstacles. Despite the fact that baseball revolved around the players -- and that most of the revenue (from admission tickets to television rights) was generated by fans eager to watch their favorite players -- these immensely skilled athletes had been cowed into believing they were "lucky" to play baseball for a living. Most didn't understand how unions operated; fewer still wanted to rock the boat.

"When I first considered taking the job, a lot of people said I would be foolish to make this move," Miller said in a recent telephone interview. "I was going from a powerful union to a group of people with no clear vision as to what they wanted. But the more I thought about it, the more I saw that it was going to be difficult to fail. They were the most exploited group of workers I had ever seen -- more exploited than the grape pickers of César Chavez."

Hyperbole maybe, but Miller used such comments to let the players know that, finally, they had an advocate on their team. He also recognized that the best way for him to gain the players' confidence was through their wallets. Among his first acts was to negotiate for a hike in the minimum salary (at the time, just $6,000) and to secure a decent pension plan. After taking care of those issues, Miller visited with every team and took the time to educate the players about their rights as workers. He talked about concepts such as "collective bargaining" and "antitrust violation" -- foreign terms to athletes accustomed to hearing about "high heat" and "the suicide squeeze."

In this way, Miller began to build union loyalty. "I explained to the players that they were the most valuable employees to their employers that I had ever seen," he says. "They were not replaceable. Because of that, if they had strength that comes from unity, there was nothing reasonable that they couldn't have."

It was a concept heretofore unheard of in sports; despite several efforts, no players union had managed to succeed. In 1972, when the players walked out during spring training, Miller held his breath. Would they stick together? They did. It was the owners who caved.

Miller next turned his attention to the reserve clause, the underpinning of the owners' power. In 1970, St. Louis Cardinals outfielder Curt Flood fired the first salvo by declaring his independence. Considered a fine defensive center fielder -- only the San Francisco Giants' Willie Mays rated better in the National League -- Flood hit .293 in 15 seasons. He was considered a vital cog in the Cards' three World Series appearances during the 1960s. For all that, he was traded to the Philadelphia Phillies following the 1969 season.

But Flood didn't want to go. In a letter to baseball commissioner Bowie Kuhn, Flood compared his plight to that of a slave, saying, "I do not feel that I am a piece of property to be bought and sold irrespective of my wishes." He sued Major League Baseball all the way to the Supreme Court.

Miller says he knew Flood's bid was fated to fail, but he was supportive of the cause. "So many people who don't remember the case speak of it as if we changed the reserve clause with it," he remembers. "We never expected to win the case. But it was a turning point in many ways. Many of the players had been brainwashed into believing that the end of the reserve clause would mean the end of baseball. If nothing else, it was a great education for the players about what the reserve clause was and what monopoly and restraint of trade were."

In 1975, three years after the Supreme Court denied Flood, pitchers Andy Messersmith of the Los Angeles Dodgers and Dave McNally of the Montreal Expos -- not quite in Koufax's and Drysdale's league, but superb pitchers in their own right -- challenged the reserve clause by not signing contracts after their original agreements expired. Miller and the Players Association filed a grievance; an arbitrator ruled in favor of the two pitchers. With the exception of pitcher Catfish Hunter, who achieved free agency in 1974 because of a loophole, Messersmith became the first free agent in nearly 100 years. He immediately signed to play for Ted Turner's Atlanta Braves.

Miller had achieved what he'd set out to do. And despite the many predictions of baseball's ruin, by almost every objective measure the elimination of the reserve clause has benefited the players and the game. Yes, salaries have skyrocketed to unimaginable heights. (Today, the minimum salary in baseball is $200,000 and the average salary is over $2 million.) But so has the value of baseball's franchises and television contracts. Total attendance, which approached 73 million last season, is at an all-time high; cities stumble over themselves to finance the building of multimillion-dollar, state-of-the-art stadiums.

Baseball's greatest fear, that wealthy owners would outbid others for free agents and thus destroy the sport's competitive balance, has also proved unfounded. From 1903 to 1970, teams from the four largest cities dominated: Led by the Yankees' dynasty, they captured 49 of 68 pennants. From 1976 to 1991, the first 15 years of free agency, 12 different teams won the World Series. In that time, 16 different teams made it to the Series.

"The owners have almost concealed the fact that Major League Baseball is enjoying its healthiest, most prosperous times," says Miller, his voice rising. "This is baseball's golden age. The league has more clubs, more new ballparks, more admission-paying fans and more revenues from sales, licensing and luxury suites. The value of baseball's 30 franchises is at the highest ever."

Says Miller about the owners' crying poor: "The word is 'chutzpah.'"

Now 84, Miller lives in New York with his wife, Terry. Despite a bum right shoulder that was damaged at birth, he regularly plays tennis to keep in shape. He no longer serves as a consultant to the MLBPA, but he continues to monitor sports' labor situations. He funnels his thoughts into acerbic columns for Street & Smith's Sports Business Journal. And he's writing another book. (His first book was 1991's "A Whole Different Ball Game: The Sport and Business of Baseball.")

One personal hurdle remains for Miller: induction into baseball's Hall of Fame. Miller says he delights in the irony that he, the owners' scourge for so many years, has garnered support from former players who now serve on the Veterans Committee. In the same breath, Miller claims that he's being blackballed because of his contributions on behalf of the players.

David Davis is a writer in Los Angeles.