Palestinian groups vie for credit for the pizza-restaurant blast that left hundreds injured. 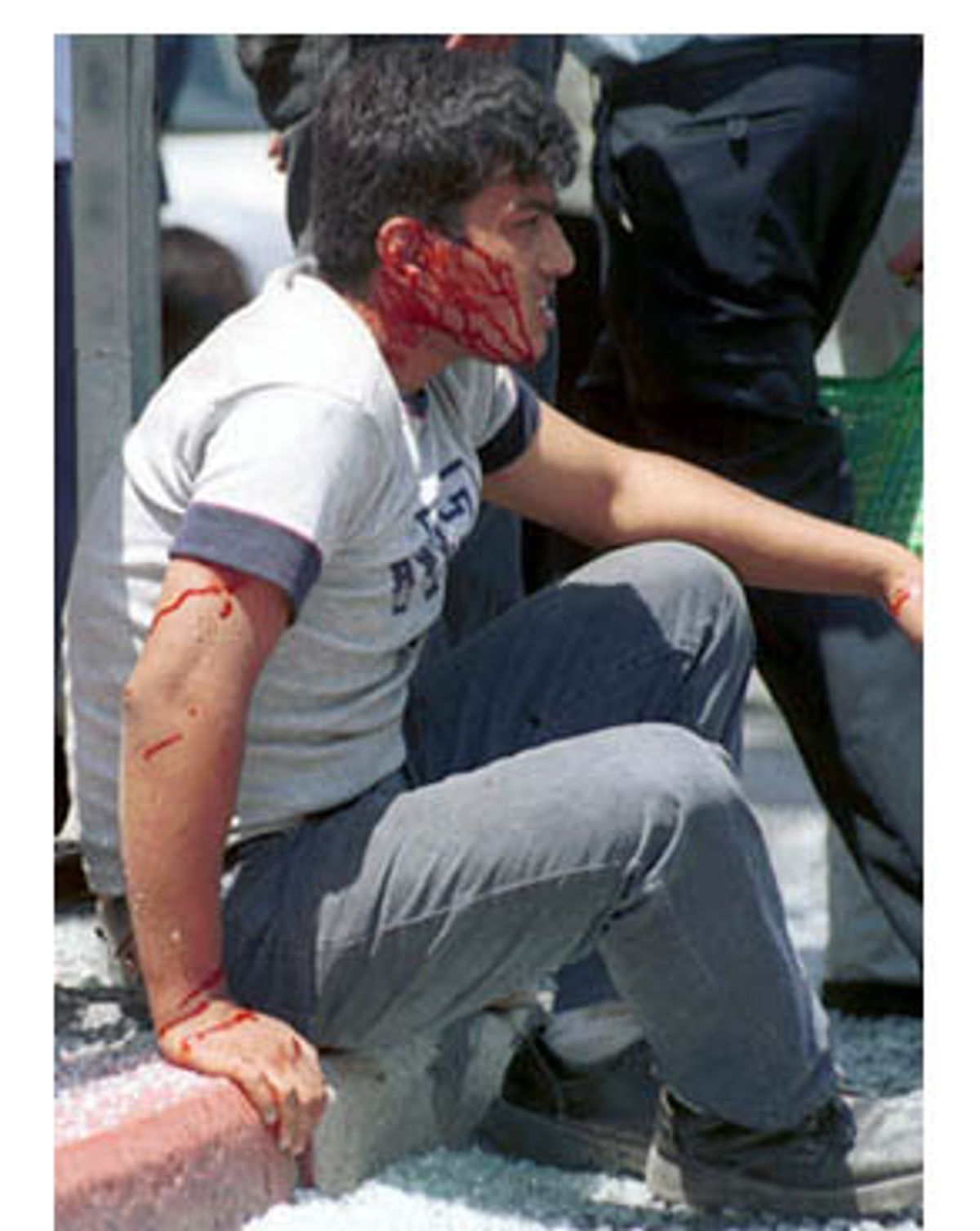 A mother is worried. Over and over again she taps her daughter Hadar's number: 0-5-1-7-1-7. But Hadar Adika, 20, is not answering her cellphone. Her sister Surit is in tears: "I think she went to Sbarro," she says in a sob. Sbarro Pizza, a popular fast-food outlet with plate-glass windows overlooking Jerusalem's busiest intersection, exploded around 2 p.m. Thursday after a Palestinian man entered and detonated a large bomb, killing himself and at least 15 and injuring more than 100 others. It was the deadliest terror attack in Jerusalem since the beginning of the Intifada and the largest in Israel since a suicide bomber blew himself up at the entrance of a Tel Aviv nightclub on June 1. Islamic Jihad and Hamas, militant Palestinian groups, both claimed responsibility for the bombing.

Just a week prior to the bombings, Sheikh Ahmed Yassin, the spiritual leader of Hamas, told Salon in an interview: "A suicide bomber sacrifices his life for the sake of others. By protecting the dignity of his people, he becomes a martyr."

Israelis had been expecting a major terrorist attack since last week, after Palestinians promised revenge for the assassination of top Hamas activists and the accidental killing of two children by the Israeli army in Nablus, a town in the West Bank. But the attack seemed particularly vicious. Because of the timing -- lunchtime on a hot summer day -- the place was packed with families and young people buying slices at the counter or sitting at tables, enjoying the air conditioning. At least six of the dead and many of the wounded were children.

An hour after the attack, the intersection is littered with glass shards and bloody latex gloves left behind by medics. Two strollers were abandoned among the chairs and tables. A team of bearded religious men wearing yellow jerseys busily comb the site for body parts so that they can be buried according to Jewish rites.

Dozens of ambulances have dispatched the dead and wounded to three regional hospitals. A boy wearing a Superman T-shirt was brought on a stretcher to Bikur Cholim, an emergency hospital just 100 yards from the scene of carnage. "I saw a little kid whose head was totally blown up," says Aaron Lercher, 22, a medic who volunteered and boarded an ambulance as soon as he heard the news. "There were wounded people, blood everywhere. The whole restaurant was in pieces." It was difficult to help, says Lercher, because it was rumored that a second bomb was placed in a car nearby. (It turned out to be a false alarm.) "We were petrified ourselves," he says.

Suddenly, Hadar's nerve-wrecked mother bursts out, "Thank God! She answered her phone!" Hadar was not at the pizzeria, it turns out, but shopping at a nearby pedestrian mall, which in the past has also been the scene of terror attacks.

Mother and sister rush away from the hospital to find her. Near the hospital entrance, Shifra Hoffman, a religious woman in her 60s, is still wondering. "My husband eats at Sbarro all the time," she says plaintively. Then she launches into a diatribe against the Israeli government.

In her left hand Hoffman clutches leaflets for Victims of Arab Terror, a right-wing association she founded at the beginning of the Oslo peace process. "It's the Israel government's fault because it has failed to stop the massacres. At Auschwitz we didn't have the means to protect ourselves. Now that we do, how come we don't do anything?" she says. A nurse comes by to reassure her: Her husband's name is not on the list of those killed or wounded.

According to Floru Sharon, head of Bikur Cholim's emergency department, the injured sustained "blast wounds, burns, shrapnel wounds, fractures, combinations of all three, neurological damage, head trauma." Many also suffered from acute anxiety. Dr. Raphi Pollack, an obstetrician at the hospital, treated a woman who is eight months pregnant who miraculously survived the blast unscathed but was worried for her fetus. Another woman, who was pushing her 6-month-old baby in a stroller on the sidewalk opposite Sbarro at the time of the explosion, collapsed with anxiety afterward. Though both she and her baby were fine, she confided to Pollack that she was constantly afraid of going out and that she "couldn't take it any longer."

Pollack, the father of six children aged 3 to 18, sympathizes with his patient: "You can't keep children locked up all the time, especially in the summer." The conflict that has raged since September and killed more than 650 people, most of them Palestinian and Israeli civilians, has seriously affected the publics psyche. Diplomatic efforts by the United States and European countries have failed so far to bring down the level of violence. And there seems to be no exit from the current strange war in which Palestinian terror attacks are followed by Israeli reprisal raids and "targeted killings" that generate, in turn, an even greater thirst for revenge. After today's attack, the option of an all-out military operation that would deal the Palestinians a hypothetically "final blow" seemed more alluring than ever to many Israelis.

"That's why we maintain a large army, to have a military solution for these things," says Pollack, 43. "If not, we can scale back the army and have a large foreign ministry and that way I don't have to pay 60 percent of my income in taxes."

Ehud Olmert, Jerusalem's mayor who came to inspect the damage, gave an apology of sorts: "There's nothing the government can do that it hasn't done already. In 90 percent of cases we're successful at preventing attacks. We'll try to be as good as we can." He rejected the idea of putting more police on the streets of Jerusalem. "We can't live like this with streets full of security people," he said. "We can't change our lifestyle." Then, turning toward the world's camera crews, he addressed a message to the Palestinians: "Don't shoot at innocent people," he said. "We have no war against the people of Nablus or Ramallah. We have a war against terrorists."

At 4 p.m., the shops around Sbarro have shut for the day. Now that the rush of ambulances and police cars is over, traffic is fluid again. Five minutes away, in a quiet residential street, a father-and-daughter duo glide by on scooters, laughing.