A satisfying '40s-style women's melodrama disguised as an art-house film taps into the secret movie-loving heart in all of us. 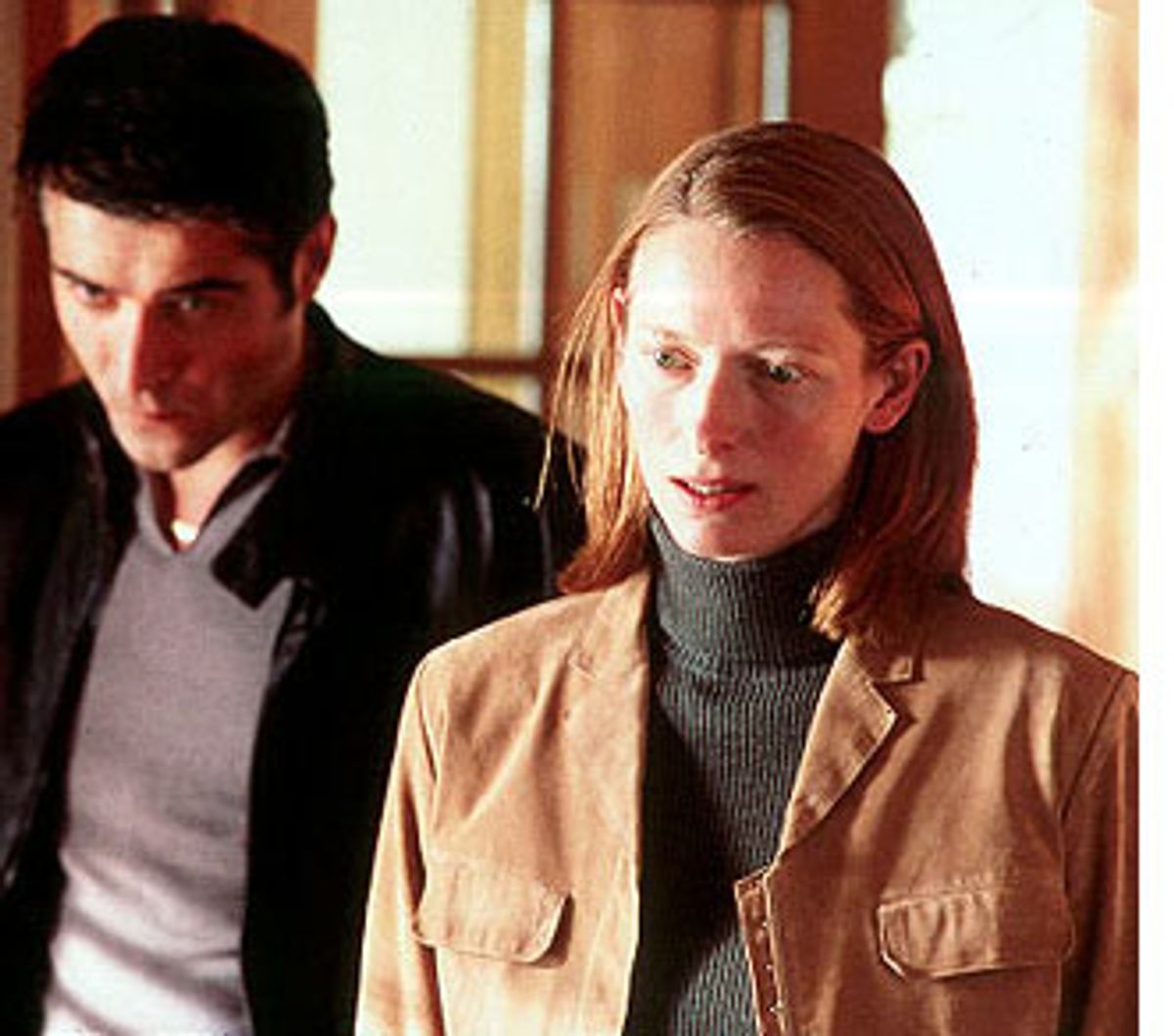 Going to the movies for sheer entertainment is becoming a lost art. I don't exactly mean that it's a skill you can practice and refine -- enjoying a movie is not all that hard to begin with. Even so, it's a bit like ballroom dancing: Sure, you can know the steps, you can put on the right clothes, but figuring out where to go to put everything together is the hard part.

At one time or another we all fork over the price of a movie ticket for the latest big dumb blockbuster or comedy, just hoping to forget ourselves for a while. But what about the kind of pure entertainment that doesn't necessarily require that we check our brains at the door? More and more, I think dedicated moviegoers, like those ballroom dancers, find themselves all dressed up with no place to go.

"The Deep End" may be a smallish picture, but it's certainly a destination. The second feature directed by Scott McGehee and David Siegel, it's a thrummingly satisfying '40s-style women's melodrama cleverly disguised as an art-house picture. The packaging is part of its appeal: "The Deep End" is completely modern-feeling, all cool and no camp, but it's still refreshingly unapologetic about the way it taps into those secret moviegoing parts of us.

McGehee and Siegel don't give us those exact conventions, of course, but they're acutely aware of the power such tropes have over us as movie viewers. They adapted the screenplay for their movie from a '40s thriller by long-forgotten writer Elisabeth Sanxay Holding called "The Blank Wall." (The novel was also the basis for Max Ophuls' 1949 film noir "The Reckless Moment.") What makes their picture so artful -- as well as so entertaining -- is the way they blend noir traditions into a strictly present-day setting, without resorting to winks and nudges to telegraph all their references. "The Deep End" updates the novel's plot to be more topical (Holding's story, of a "respectable" young unmarried woman engaged in a love affair, would no longer be considered daring), but it's neither preachy nor sensationalistic. It maintains an air of self-contained dignity through every frame, while the history of noir storytelling flutters in the shadows, behind the action, like a persistent ghost.

The story is juicy, but McGehee and Siegel don't milk it; they let it unfold quietly. "The Deep End" is a perfect example of a picture that moves slowly (its pace is stately and somber) but holds you every minute. Margaret Hall (Tilda Swinton) is a lonely 40-ish housewife who spends much of her time apart from her naval-officer husband, rambling around in the couple's Spartan-glamorous Lake Tahoe home with her three children and her father-in-law, Jack (Peter Donat).

Her oldest son, Beau, has an abusive male lover (Josh Lucas); when the lover's body washes up on the shoreline near their house, Margaret takes frantic steps to protect him -- he's a promising music student who's headed for great things, but more than that, he's simply her son.

If it sounds clichéd to say that a mysterious stranger shows up at Margaret's door one day, there's just no way around it: Alec ("ER's" Goran Visnjic) is the quintessential dark stranger, complete with a threatening-looking dice tattoo on his neck and an only slightly diffused Eastern European accent. Alec has information about Margaret's son that could endanger him; like a mother cat protecting her cub, she springs to action -- slowly, and with caution, but the way Swinton plays it, the fierce nature of her protectiveness is never in doubt.

Swinton's skin is like the nacre of a seashell, pearly in its translucence. The coolness of her coloring plays right into the visual scheme of the movie, all icy greens and blues shot with breathtaking precision by Giles Nuttgens. When Nuttgens shows us a lakeshore rock bathed in sunlight, it's a bleached vision instead of a warm one, and yet even its coldness has a solitary, remote beauty.

A stunning Tahoe landscape of mountains and trees is shot like a lush carpet of bluish greenery, as if it were a vista under the sleepy spell of chloroform instead of chlorophyll. And the water of the lake is the coolest visual of all: At one point, Margaret dives in after stripping down to her utilitarian white cotton underwear, a vision so pale it's almost spectral. She's a water nymph with a mission, all grim resolve and determination; the lake's chilly secrets are no match for her.

As Swinton plays her, Margaret is something of a fuzzy mystery at the beginning of the movie, a character with about as much definition and clarity as the dandelion aura that a very nearsighted person sees when he looks at a streetlight. Swinton sharpens the focus bit by bit; by the end of "The Deep End," she's won us over to understanding Margaret's motivations and actions. She doesn't allow us to warm up to her so much as appeal to our sense of reason. Once you know what it's like to be inside Margaret's skin, every step she takes feels sensible and appropriate, even as we know she's inching closer and closer to real danger.

Swinton is especially good at delineating the distance that creeps into the relationship between herself and the son she's trying to protect, Beau (Jonathan Tucker). Beau doesn't know what his mother is going through -- she keeps it a secret from him and the rest of her family -- and so for him, the mother-son bond feels like business as usual.

But Swinton does an amazing job of walking a tricky line: Her love for her son is never in doubt, but in the way she looks and talks to him, you occasionally detect flickers of resentment. The subtext is that although she's willing to protect him with her own life, for her own preservation she also needs to insulate herself from his childish cluelessness. She'd be no good to him if she allowed her love for him to subsume her sense of self; in that sense, hanging on to that sense of self becomes the ultimate maternal sacrifice.

Visnjic, as Alec, is completely in sync with Swinton. His character is of course more menacing than Swinton's, but oddly enough, we feel more comfortable with him from the start: We know what to make of a guy like him. Or at least we think we do. Just as Swinton does with Margaret, Visnjic adds gradual layers to his performance; its depth and resonance smolder like glowing charcoal.

McGehee and Siegel earned acclaim for their debut feature, 1993's "Suture," but I couldn't see that movie as anything but a self-conscious and facile art picture that would be numbingly pedestrian if not for its central gimmick. A man takes over the identity and life of another man, getting away with it because the two allegedly resemble each other so closely. The gimmick is that the two men look nothing like one another: One is played by black actor Dennis Haysbert, and the other by the (very) white Michael Harris. The movie's percolating racial-slash-existential "message" is the kind of thing that seems designed to ignite dinner party conversation rather than actual thought, among those who don't realize there's a distinction.

On the basis of "Suture," I might have been closed off to "The Deep End" -- which only proves that no matter how much you dislike a director's first picture, you should always give him or her at least one more chance. McGehee and Siegel have hit their stride in "The Deep End," without tricks or leaden themes -- just artful storytelling and good instincts. "The Deep End" doesn't have a knotty message, but it's a much more meaningful picture than "Suture." It reads deep below the surface of moviemaking conventions, of ancient whiskery traditions like the mother who'll do anything to protect her son, and relays their beauty back to us as something fresh and new. This time, McGehee and Siegel plunge right in. Their sonar is like music.