The mystery we deserve

Marilyn Monroe died 39 years ago this month, and we still yearn for answers we'll never get. 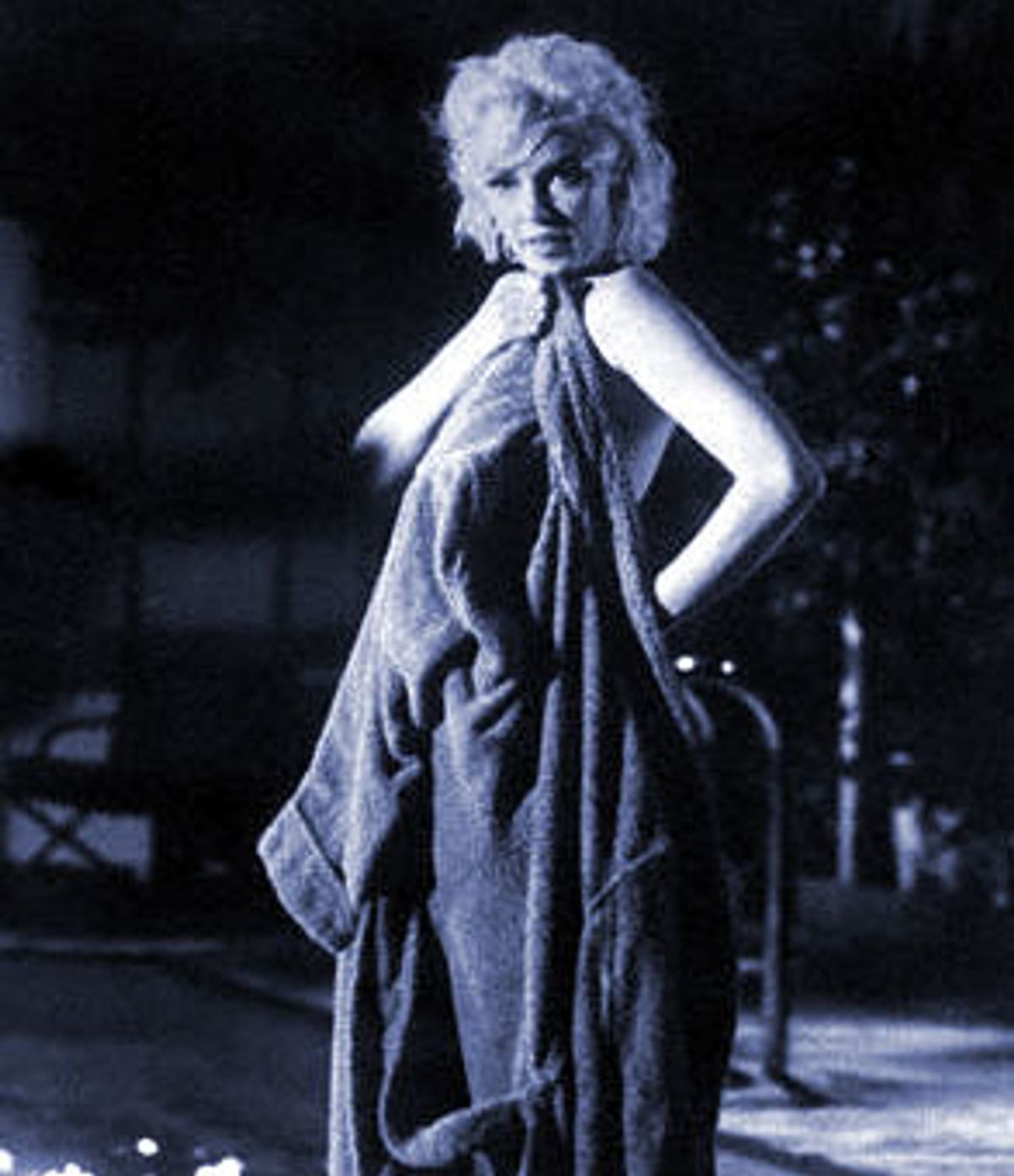 Last weekend, the American Movie Classics channel premiered a strange little rescue act from the debris of Hollywood history. They put together a kind of assembly from the footage that survives of a production called "Something's Got to Give." This was the movie from which Marilyn Monroe was fired in June of 1962, because she had been ill or late so often that the picture was two weeks behind schedule. A couple of months later -- Aug. 5 -- Monroe was dead.

To sustain the theory of a complete program, AMC had also put together a Monroe documentary that went through the usual motions and made the normal scandalous suggestions. Thus, in building the case for the studio's frustration with Monroe, it described how on one occasion she was absent from her set but radiant, in Madison Square Garden, in New York, in a dress that could have been applied like lacquer, to sing "Happy Birthday, Mr. President" to John Fitzgerald Kennedy.

The whole show therefore offered two of Marilyn's all-time showstoppers: the birthday song (filmed in rough black-and-white), and the gorgeous color footage of her nude swimming scene for "Something's Got to Give." What was not mentioned was the way in which the patent stupidity and irrelevance of "Something's Got to Give" might also have been offered in court as reasons for a disturbed woman of 35 plus taking her own life. Why should anyone so good, mischievous and magical singing "Happy Birthday" have to play in such a drab, mechanical and leering "comedy"? Why couldn't the system handle a talent such as she had? Why do so many of her movies end up feeling like dirty jokes being offered behind her back? Why did the jokers hate her so much?

I know, it seems impossible these days to explore the jungle called Marilyn Monroe with any purpose. There have been so many books and documentaries that were as speculative, romantic and depressing as novels. Who can tell what she was like? Who really cares now, nearly 40 years later? Why don't we settle for the idea that Monroe had become such an image that her own "reality" had been smothered? There was nothing there for her to hold on to, so how can we hope to grasp her?

Well, there was one small thing in the AMC documentary that held my attention. There was a man who served as producer on "Something's Got to Give," a Henry T. Weinstein. He was very overweight, a man not served kindly by any camera, with many hints of depression. And I would guess that he was filmed not long before his death a few years ago.

I met Weinstein once, researching a quite different project. He was already a Hollywood failure, living in a small apartment in Studio City, soaked in his own sadness. He was also very intelligent, unexpectedly tender in his feelings and insights, and nursing many secrets. It was his job on the movie to do whatever he could to keep Marilyn sweet, present and working. So he followed her moods minutely, and with sympathy. And he noted how there was a point, just before the end, when she seemed better, stronger, ready to finish the silly movie. Then she went away for a weekend, and she was never the same.

That spring and summer, the Cal-Neva Resort, on the shores of Lake Tahoe, was getting ready to open after elaborate refurbishing ordered by new management. That new management was, in large part, Frank Sinatra. Monroe's costar on the forlorn comedy was Dean Martin.

None of this is revealed here for the first time, though the full story of what happened has never been made clear. But Monroe and Sinatra were intimates that season, and Sinatra was involved in explaining to her how embarrassing that birthday party in New York -- her triumph -- had been to the president. After all, he was more than willing to bestow the presidential fuck on an actress, in passing, but it was her muddle-headed responsibility if she had ever thought there could be anything more to it. He had a lot of casual sex to avoid falling in love. Sex for her, though, was this big, heavy, soupy thing. And the film of the birthday party was just a touch too blatant. Nothing happened at the Garden, maybe, but any idiot could feel what might have happened. So, cut it out.

And Marilyn, spending a few weekends up at Cal-Neva, with just a few of Frank's friends -- like Sam Giancana -- was given a quick education in the kind of man her new beau was, and it was crushing if you think that she could have a big, romantic, old-fashioned feeling for the president. Late in July there was a weekend up at Cal-Neva that is supposed to have got out of hand, a kind of orgy where showbiz people and gangsters used a Marilyn who was already doing too many drugs. It was ugly, and a few days later she was dead.

Of course, it is always possible that she was killed (for safety's sake), and because no one could be sure what the idiot would say -- she was so spontaneous. It is more likely that she was too unclear to recall just what she had taken. But there is a chance that the last shred of fond, daft hope had been fucked out of her and she was weary of being just a body. Don't expect definite answers, but understand how she is a mystery we deserve.