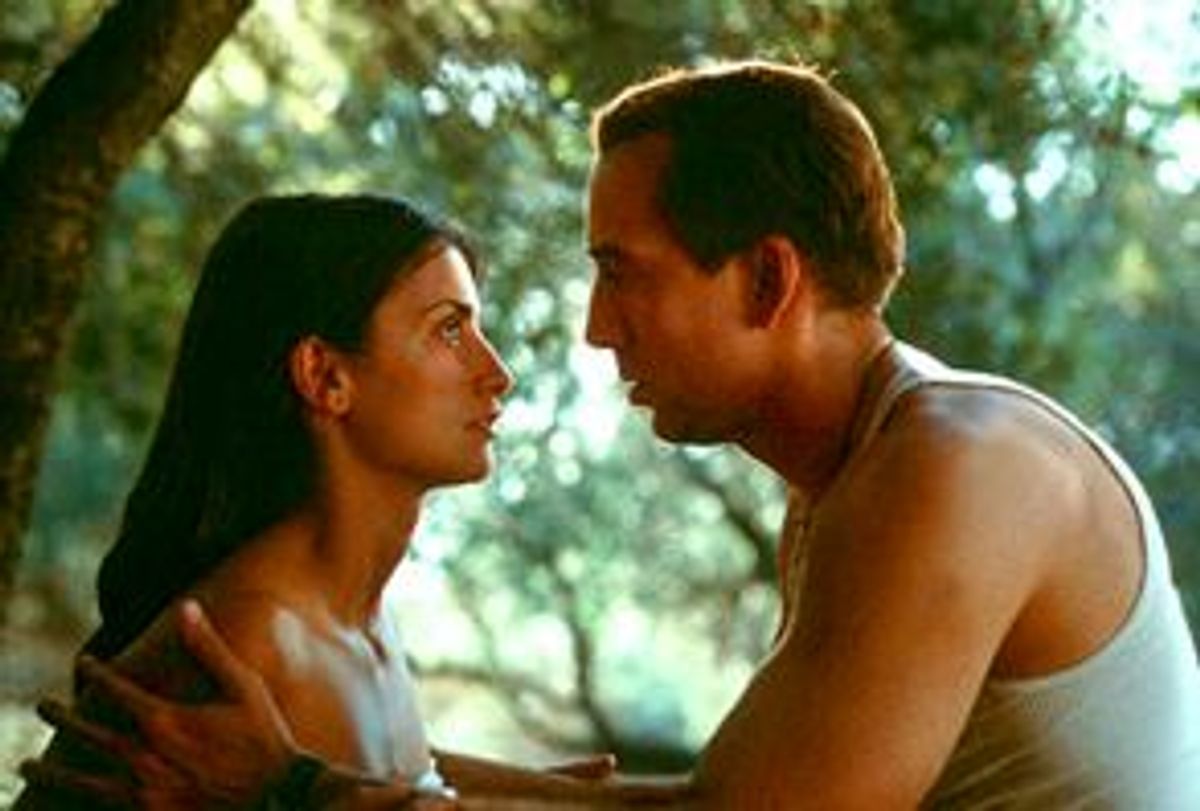 When did fascists become acceptable romantic heroes? The first instance was "The English Patient," where we were meant to go all swoony at the romantic nobility of Ralph Fiennes' saving Kristin Scott-Thomas's life and overlook the fact that he acts as a Nazi collaborator to do it. Now, in "Captain Corelli's Mandolin," we have Nicolas Cage as an Italian army officer in 1940 occupied Greece who's not really a fascist soldier, just a nice Italian boy. Boy, oh boy!

Like "The English Patient," "Captain Corelli's Mandolin" is based on a much-lauded novel that I found well nigh unreadable. In the case of the former it was because of Michael Ondaatje's opaque psuedo-poetic prose; in the case of Louis de Bernieres' novel, it was because of the precious folk fableness of it all. True to its source, Shawn Slovo's screenplay is full of colorful peasants and their colorful traditions, artfully distressed buildings and dusty sun-baked roads, incidents served up like a soggy overcooked stew, as if they'd been boiling away in some codger's memory for years, trotted out for village gatherings and holidays. ("Papa, tell us about when the Italians came!") As middlebrow prestige pictures go, "Captain Corelli's Mandolin" is decently enough made. John Toll's cinematography is most beautiful whenever the camera gets near water. Toll gives the Mediterranean such blue-green clarity that when a couple goes into the cool water with their clothes on you can imagine moviegoers across America, sweltering through another August, wanting to jump in with them.

But the movie's craft is dead and dutiful. It's an Oscar machine. There's no trace of the playfulness or willingness to please that the director, John Madden, brought to his last movie "Shakespeare in Love." That film felt like a holiday for the players; the actors here feel weighed down by their knowledge of the project's worthiness. Though Madden has cast the central role perfectly. The heroine is played by Penelope Cruz, charming in "All About My Mother" but ever since descended into the prestige-movie equivalent of shtick. She's lovely, all right, but consciously lovely. There's no fire or sensuality or surprise in her. And the scale of the emotions she projects is so tiny it doesn't disrupt the plummy production values.

Cruz plays Pelegia, the daughter of her Greek island's doctor (John Hurt, hiding behind a ludicrous moustache and giving in to every cliché of the wise, crusty old man bit). She is in love with Mandras (Christian Bale), a fisherman whom her father considers beneath her. But when the Italians invade Albania, the pair make a pact to marry after the war and Mandras goes off to fight. By the time he comes home, the Greeks have defeated the Italians and an enraged Hitler has divided up control of Greece with Mussolini. Mandras returns to find the Italians have taken over the island and one of their number, a Captain Antonio Corelli (Nicolas Cage), has been billeted with Pelegia and her father. The story the movie tells is how Pelegia, going against her promise and her instincts, falls in love with the Italian.

If "Captain Corelli's Mandolin" had just been the story of how love makes nonsense of our rationality and our loyalties, it might have been potent melodrama. Wartime may be good for sex (the possibility that you might die at any time has a freeing effect), but it's rarely good for romance. And the movie does show how brutally partisans treated women who became even mildly involved with the invaders. (In Marcel Ophuls' epic documentary "The Sorrow and the Pity," we see newsreel footage of French women who had slept with Germans having their heads shaved and paraded in public -- especially grotesque in a country that collaborated so widely.)

But in order to make a statement about the confusions brought about by love, "Captain Corelli's Mandolin" asks us to become willing amnesiacs. Cage's Corelli may be an officer in Mussolini's army, but he's really just a gregarious homesick man who loves opera and dreams of seeing Italy again. You know he's a sensitive sort because he can really diddle that mandolin. He's such an innocent that he's never even pointed a gun at anybody. When someone speaks to Corelli about his friends, the Germans, he's quick to answer that his friends are the men he serves with, the same men he grew up with.

But isn't there one soldier among this cheerful, swarthy bunch who thought that Mussolini was even a teensy bit right? These soldiers don't rough anyone up or use their muscle; they shrug when the mayor refuses to surrender to a force his country's army has defeated. All they do is sing opera and cavort on the beach with the local prostitutes. Joining the army is just something these guys did, as many men do when their country is at war.

I'm not denying what the likely consequences were for refusing to serve in a fascist state. But that doesn't excuse them from the consequences of their actions, and neither does the aid Corelli eventually lends to the Greek partisans. They are still serving a cause that wanted to end the meaning of humanity as it had always been understood. When Corelli says that if he were to see any man set upon, he would look on that man as a brother, you want to say, Tell it to the Ethiopians. Mussolini's soldiers are such a warm, civilizing influence that before long they've even got the island's head German officer belting out "Santa Lucia" with them. And when this Nazi sees his fellow German officers carry out brutal reprisals against partisans, he acts as if the possibility of this brutality had never occurred to him. Just what did he think Hitler had been doing for the last seven years?

It's not that Madden and Slovo ask us to hold two conflicting thoughts in our head at the same time. It's that they ask us to accept a candy-coated vision where moral responsibility plays no part. Both "Captain Corelli's Mandolin" and "The English Patient" want to remind us that anyone can be victimized in a war. But they push it further to say that all victims are equal, and that's just a cushy notion with about as much sense behind it as that old antiwar slogan "War Is Not Healthy For Children and Other Living Things." It doesn't help that Nicolas Cage is so unappealing as Corelli. It's the kind of outgoing, ethnic charm that you insinctively recoil from because it feels so phony. He may be of Italian descent, but here he's less authentically Italian than Chico Marx.

The movie's real romantic presence is Christian Bale, which is a hell of an achievement considering he's the movie's cuckold. (The only other actor I know who's managed that is Richard Harris in "Camelot.") The script keeps him zig-zagging back and forth to join the army, then to join the partisans, but Bale is so broodingly romantic (what a Heathcliff he'd make!) that your sympathies go out naturally to him, making the movie's willingness to forgive Corelli even more off-putting. And though they look nothing like mother and son it makes sense that the great Greek actress Irene Papas has been cast as Bale's mom. Blood may not be the connection between them, but talent is.

We've become so used to pop movies that have nothing in their heads that it may seem a little churlish to dismiss a film that at least tries to tell an adult story. But a movie stuffed full of nothing but special effects and a popcorn story feels less objectionable than a movie that tells us to ignore everything we know about history. Movies have sold us ignorance as bliss. "Captain Corelli's Mandolin" sells ignorance as a refined evening's entertainment.