This wannabe Western is a listless mess. 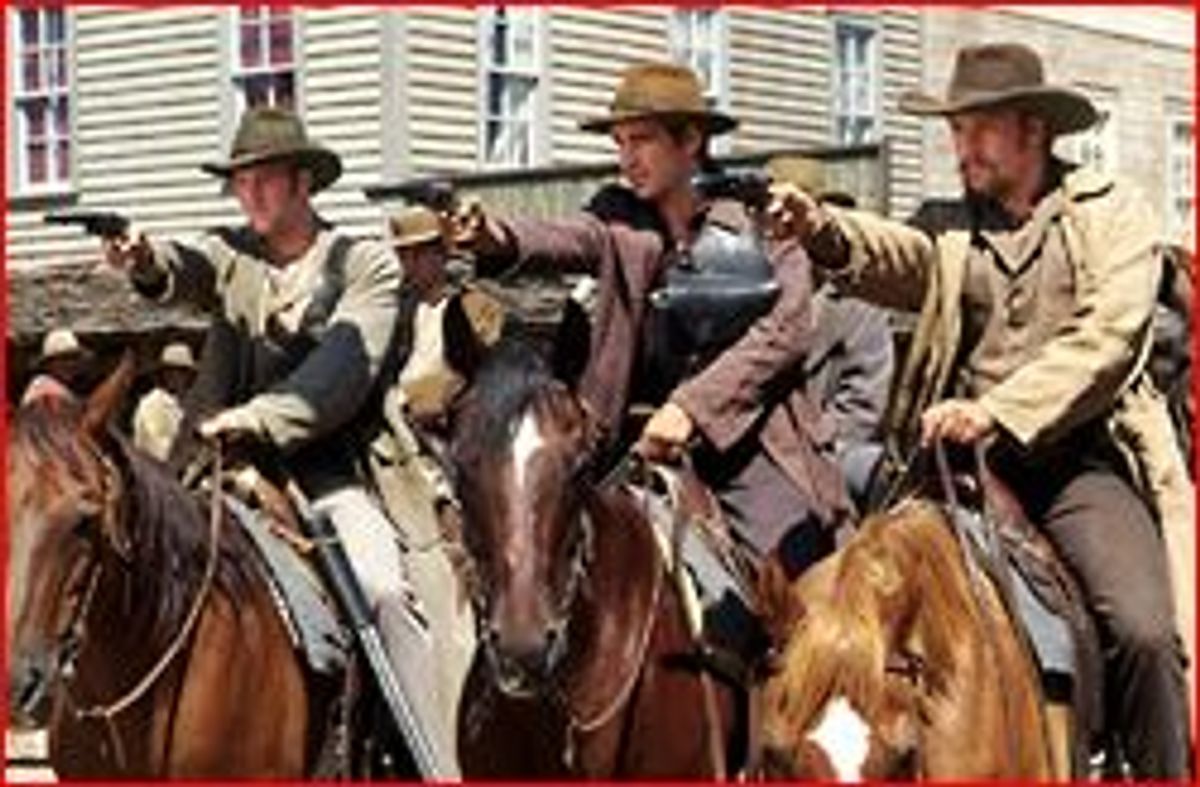 Les Mayfield's "American Outlaws" is a retelling of the Jesse James legend targeted toward the Restless Youth of Today. You know this because it's filled with dopey anachronistic dialogue, the action sequences are so carelessly worked out that it's impossible to figure out who's doing what, from where, or why, and it features a Moby song. It also reassures us that James was a supernice guy, with principles and everything. He was also kind of like a rock star, but with a gun. And he shot people, but he didn't really mean it. Picture 1860s Missouri as Ft. Lauderdale during Spring Break and you've got the idea.

Really just a marketing tactic with a plot, sickly and pale, trailing wearily in its wake, "American Outlaws" is a listless mess. An ensemble adventure featuring a bevy of ostensibly hunky male leads -- among them the Irish actor Colin Farrell, acclaimed for his role in last year's "Tigerland," as Jesse, and Gabriel Macht as his older, smarter brother, Frank -- the picture lurches along uncertainly in jerky fits and starts. The setting is the post-Civil War South. The James brothers, along with the help of their pals the Younger brothers (Scott Caan and Will McCormack) and assorted other ne'er-do-wells, flit about the Missouri countryside robbing banks and trains willy-nilly, parading around constantly in public but never getting caught.

But their motives are pure: The evil railroad magnate Thaddeus Rains (played by Harris Yulin in primo Simon Legree facial hair) has been trying to buy up Missouri farmland at ridiculously low prices, thus ruthlessly forcing families off the property. The last straw is when the Jameses' mom (Kathy Bates, in a sassy, eye-rolling performance that seems to be sending up the whole movie) perishes after a group of Rains' thugs blows up her house.

That does it! The only thing left for the Jameses and the Youngers to do is to trample the countryside stealing money and terrorizing citizens. Detective Allan Pinkerton (Timothy Dalton, valiantly trying to come off as something livelier than a piece of cardboard) has been employed by Rains to push the railroad company's agenda on citizens and to capture the James-Younger gang; mostly, he just watches their antics, frustrated and amused.

You can almost see where he's coming from: As it's told by Mayfield (from a script written by Roderick Taylor and John Rogers), the story of the James-Younger gang comes off as inert and inept, the sort of thing that invites you to sit back and watch incredulously. During bank robberies, the gang members waste so much time goofing around (these are fun-loving bank robbers) that you wonder why somebody doesn't just march up and slap handcuffs on them while they're chortling at one another's lame jokes. Scene by scene, this lazy runaway train of a movie rattles toward a conclusion that's so haphazard and frayed you can hardly accept it as an ending: It's simply as if the writers ran out of ideas for clever robberies and called it a day.

All the way through, the actors are saddled with so much howlingly ridiculous dialogue, it's hard to assess them as performers. Farrell slings a good one early on: "God help any fool tries to come between me and my farm again," he intones earnestly, every whisker in his five-o'clock-shadow aquiver. Vivien Leigh's Scarlett O'Hara, shaking her fist at the Almighty after barfing up that shriveled turnip, has nothing on him.

That's "American Outlaws" all over: No drama, no lyricism, just cornpone. It's too bad, because outlaws are, by their very nature, glamorous movie subjects. If "American Outlaws" were half as engaging (not to mention as gorgeously put together) as "The Long Riders," Walter Hill's 1980 treatment of the same subject, it would be a great Saturday afternoon's entertainment.

No such luck. The marketing slogan for "American Outlaws" is "Bad is good again," which I'd call a serious case of wishful thinking. Besides, if the legend of Jesse James really does have to be retooled so today's audiences will "get" it, you need something catchier. My vote goes to "I survived highway robbery and all I got was a lousy T-shirt."