Poverty, a rigid class system and conservative Hindu values are quickly turning India into the next South Africa in the global AIDS epidemic. 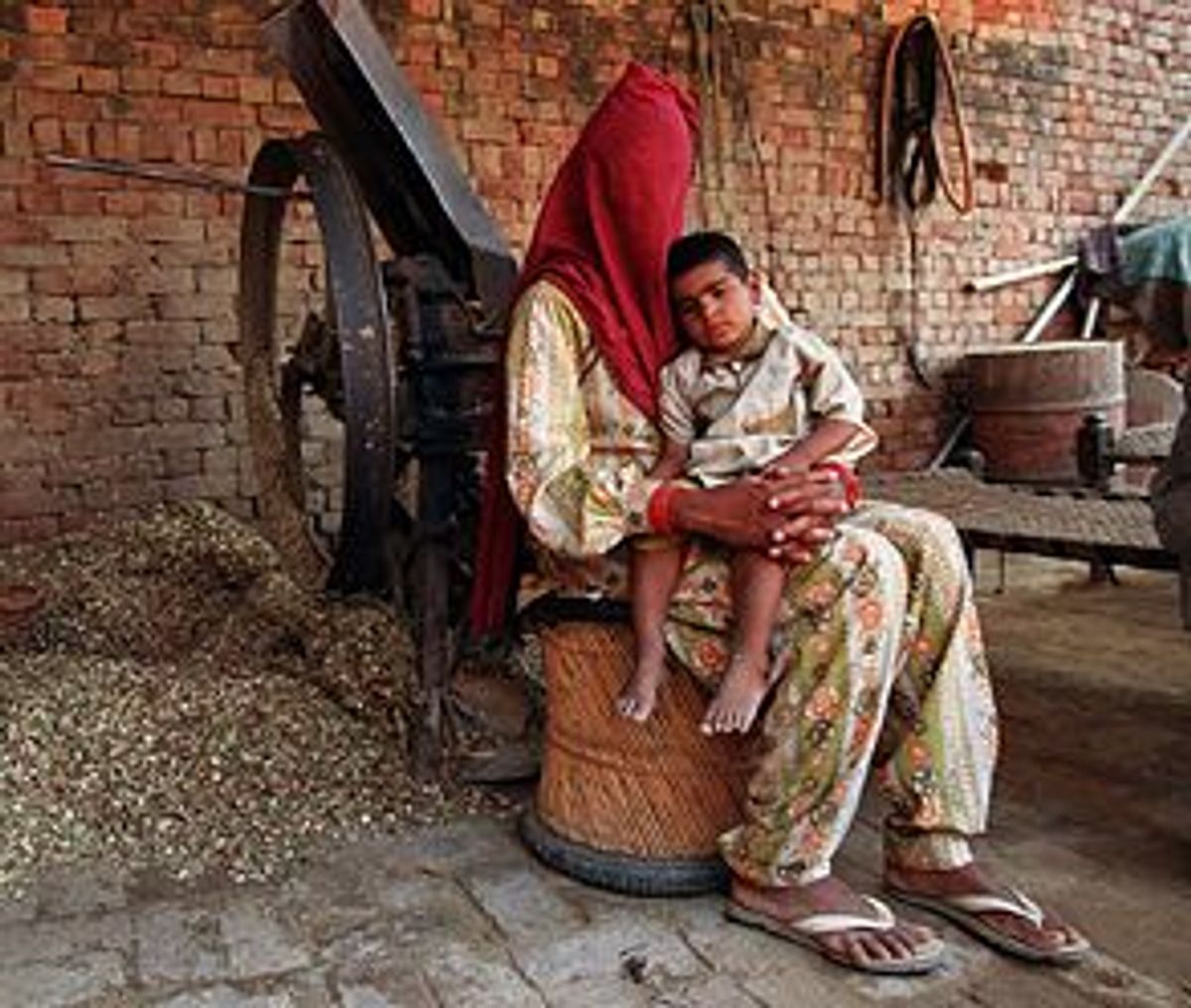 P. Kousalya sits behind her desk in a second-floor office off a dusty, diesel-polluted street in India's southern port city of Madras. Her hair is pulled back; a green "khati" cloth smock hangs from her shoulders, revealing her fragile, petite frame. When she stands, she looks more like a teenager. Kousalya, for all practical purposes, should be dead. But she survives on donated drugs from doctors who get them as samples at conferences and the community of women she clings to in the Positive Women's Network for the state of Tamil Nadu. She also serves as the group's president.

Her story of forced marriage, forced sex and subsequent infection with HIV from her husband, who knew of his status before the marriage, is typical of many new cases in India. Kousalya's plight, along with that of millions of others, was the subject of the first-ever United Nations General Assembly Special Session on a disease last month. During the meeting, U.N. officials placed India alongside Eastern Europe, the Caribbean and Asia at the top of the list of areas where the disease is likely to explode as it has in sub-Saharan Africa if governments do not act quickly and boldly. "We are projecting that deaths are going into the millions very quickly" in India and China, said Mark Malloch Brown, administrator of the United Nations Development Program. Yet, disturbingly, not one head of state from any Eastern European country or Asia came to the session in New York.

Figures released by the U.N. reinforce a claim made by UNAIDS executive director Peter Piot last year at the World AIDS Conference in Durban, South Africa, that the pandemic is going to get worse before it gets better. With 440,000 new cases reported every month and rates in sub-Saharan Africa showing no signs of a downward turn, it's definitely getting worse. Eastern Europe now has the fastest-growing rate of infection. Russia and its former Soviet states seem hardest hit. Ukraine now has 240,000 people infected with HIV.

In the Caribbean, too, there is cause for alarm: In several countries, more than 2 percent of the population is already infected. The infection rate in Haiti is over 5 percent -- the highest rate outside Africa. But it's Asia, with its high population density, poverty and economic changes bringing more people to cities, that most worries AIDS experts. The U.N. report states that Asia has 6.4 million projected cases. And in southern Asia and Southeast Asia 780,000 new cases were reported in 2000. Close to 2 percent of Thailand's population is infected, and now the virus has seriously taken root in Cambodia and Myanmar, each of which has an infection rate of nearly 2 percent.

Alarmed by the continued spread of the virus in Africa and what it fears will happen in Eastern Europe and Asia, the U.N. is asking that its donor nations and the private sector meet a new funding standard that would add seven to eight times the sum of $1.8 billion now allotted to support the myriad programs sponsored by the U.N., the World Health Organization and others attempting to tackle HIV/AIDS. Called the Superfund, the new funding standard is U.N. Secretary-General Kofi Annan's response to the deterioration of the social fabric in many African nations and other countries being decimated by AIDS.

The push now is to link AIDS with other illnesses such as malaria and tuberculosis, which are on the rise as a result of both AIDS and the effects of globalization on the fragile economies of developing nations. Globalization has already caused unprecedented movement of people into already overpopulated urban centers and forced cuts in social spending and public health in order to meet IMF and World Bank standards for debt restructuring and loans. And Annan is suggesting that for public health strategies to work, they can no longer be separated into national agendas but must be addressed collectively and internationally.

Good ideas all, but sharing the economic and social burden of AIDS will be difficult to sell even within a single country like India, which can boast of state-of-the-art hospitals with American-trained physicians in a city such as Bombay, while in the swelling slum communities infection rates of HIV, T.B. and malaria are spiraling out of control.

India has chronic shortages of water, dangerous levels of pollution, horrific urban sanitary conditions, a deteriorating public health system and an ever-increasing number of people living in poverty (now over 320 million). So it's no wonder that AIDS in India has begun to match the fears of international health officials who have been predicting a monstrous crisis that could compete with the horrendous state of affairs in sub-Saharan Africa.

The Indian government says that there are only 87,000 reported cases, as compared with UNAIDS' estimate of 3.7 million. That may be because reporting is not mandatory; only those who become sick get tested. And there are very few treatment centers for AIDS; in rural areas there is practically nowhere for people to go, even if they have the courage to get tested. The actual number of people infected in India is anyone's guess. The government begrudgingly accepts UNAIDS' estimate, but only because officials are learning fast how the AIDS money game works. The more cases you report, the more international aid you get.

Doctors on the ground at YRG Care in Madras, one of India's few AIDS research and treatment clinics, all believe the 3.7 million figure is conservative. The clinic's Dr. Yepthormi cited as evidence the cases discovered in a routine bimonthly service the center provides in Madras slums, where it performs basic health checkups for a variety of diseases. Yepthormi says the center routinely discovers three or four cases of HIV in a sample of 60 to 70 people. "And how many have they infected? Nobody has any idea how big it might be -- it could easily be two, three times higher than 3 million," he adds, eyebrows raised.

The suffocating class system and the deteriorating and overburdened public health infrastructure are only part of the problem. Some put the blame for the AIDS epidemic squarely in the hands of India's middle class and its present conservative government, which uses traditional Hindu values to stir up public support. Many Indians still blame the epidemic on "certain social evils," as Prime Minister Atal Behari Vajpayee euphemistically describes the root cause of the spread of HIV.

Indeed, India is having a hard time reconciling its traditional cultural attitudes about women and sexuality with the insatiable appetite its youth have developed for what they see on MTV and the Internet. Indians embrace the economic advantages of globalization, but are leery of the cultural ideas it has introduced into Indian society. Proactive, pragmatic and frank prevention campaigns are all talked about but are still too embarrassing for too many people to be effective.

While I was in India, generic drug manufacturer Cipla began its first ad campaign on television. In the ad a woman sits alone on a bench overlooking the seascape of Bombay. She's forlorn; families pass her by. Then the scene shifts and one of the families turns out to be hers. "AIDS doesn't mean you will die. There is hope now for a healthy life," a warm voice advises. And the woman picks up one of her children and they rejoin the crowds strolling happily along.

For those who can afford to live in the fantasy of India's middle class, where sex is like a dance number in a Bollywood film and health matters can be hushed away, the Cipla ad might offer some hope. But for those who live with HIV in the other India -- where 44 percent of the population earns less than $1 a day and can't afford the company's $90-per-month anti-retroviral cocktail therapy -- Cipla's campaign seems a cruel reminder of the division in modern India between those who will be able to live with HIV and the millions who won't.

Michael McColly is a freelance writer working on a memoir that looks at the role of HIV-positive people in shaping the international response to HIV/AIDS.