"Jay and Silent Bob Strike Back"

Even if it's a second-rate joke, and even if Kevin Smith knows it, these two lazy dipweeds really are just a third-rate Bill and Ted. 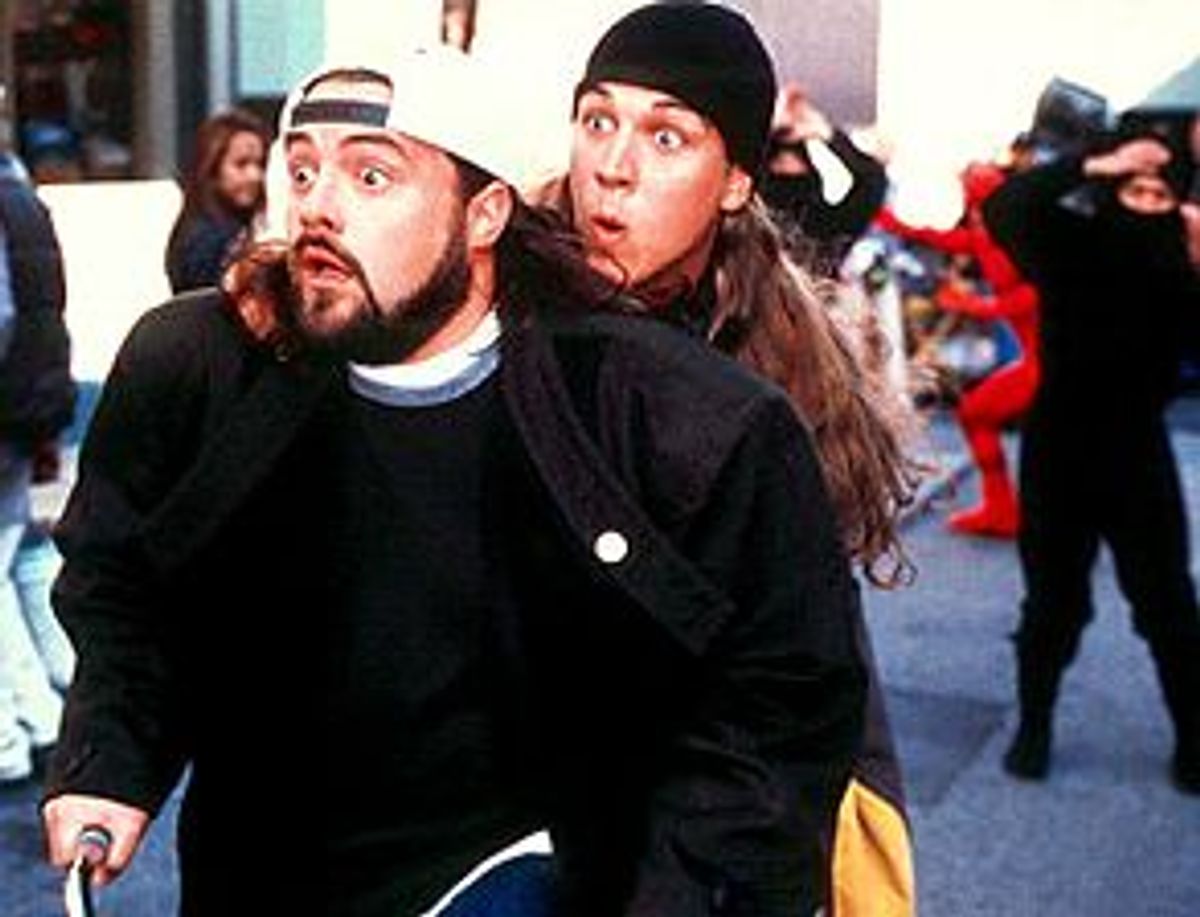 There's a bit in "Jay and Silent Bob Strike Back" where Ben Affleck, making a cameo appearance as the comic-book artist he played in Kevin Smith's "Chasing Amy," reads off a bunch of comments left on an Internet fan site with the unabashedly brilliant name Moviepoopshoot.com. Apparently, comic-book nerds everywhere are outraged about an upcoming movie featuring characters created by Affleck in "Chasing Amy," based on his local neighborhood slacker-stoners, Jay (Jason Mewes) and Silent Bob (Smith). Believing (wrongly, as it turns out) that Jay and Silent Bob have sold out to Hollywood, the fans can't think of enough bad things to say about them: Jay and Silent Bob "work in small doses, if at all," says one. Jay and Silent Bob "are a third-rate Cheech and Chong or Bill and Ted," says another. "Jay and Silent Bob are one-note jokes that only 'Net nerds and stoners laugh at."

The bit, clearly Smith's preemptive strike against moviegoers who doubt Jay and Silent Bob's ability to sustain a whole movie on their own, would be funnier if "Jay and Silent Bob Strike Back" proved those online wiseguys wrong. As it is, they're woefully on the money.

Jay and Silent Bob are recurring characters in Smith's films, having appeared as amusingly low-key minor characters in each movie from "Clerks" to "Dogma," and "Jay and Silent Bob Strike Back" is, Smith claims, his fond farewell to the duo. Jay is the verbose, thoughtlessly crude one; Silent Bob is the cranky one who (almost) never speaks up, the straight guy who more often than not responds to Jay's shenanigans with a cartoonishly cocked eyebrow. In "Jay and Silent Bob Strike Back," the two learn that the comic book based on their personalities has been sold to a major studio (that would be Miramax, the parent company of Dimension Films, which produced this movie -- the first of many, many thumpingly self-referential jokes). Affleck's writing partner and inker (Jason Lee) was the one who heartlessly sold Jay and Silent Bob down the river; disgruntled that their reputations have been challenged, Jay and Silent Bob take the Herculean step of actually leaving the strip-mall paradise of Red Bank, N.J., to travel to Hollywood and kick some asses.

Smith tries to give us a wacky road movie with an increasingly absurd pileup of twists and turns, but it's one that never feels quite as loose and freewheeling as it should. "Jay and Silent Bob" is loaded with crude jokes, including an extended riff on a terrorist organization known as the Coalition for the Liberation of Itinerant Tree-dwellers (figure out the acronym for yourself).

But even the funniest of these brainily ludicrous jokes sputter halfheartedly. In the earlier pictures, particularly "Chasing Amy" (where, it's interesting to note, Jay and Silent Bob knew enough about business to collect likeness rights from the comic book artists who were making money off them, an element of savviness that they've apparently lost here), Mewes and Smith were so laid-back you were practically seduced into laughing at them. Here, they've lost much of that hazy loopiness; their line delivery and facial expressions have been punched up a bit, just enough to make their low-key demeanor seem like an affectation. They seem more like conventional teen-comedy characters than the almost glamorously mysterious dipweeds they used to be.

As a result, even their zestiest pot, dick and fart gags lack conviction. No matter how low Jay and Silent Bob go, Mewes and Smith always manage to float tastefully above the fray on a vague cloud of ironic detachment -- the unspoken signal is, "Sure, we think this stuff is funny, but not that funny." There's none of the go-for-broke madness you get in the best work of the Farrelly brothers, or in Trey Parker and Matt Stone's "South Park: Bigger, Longer and Uncut." The movie dribbles and drags in patches, which is supposed to be OK since it's stoner humor, but Smith has it in him to do much better.

Smith (who also wrote the screenplay) must have known that a little of Jay and Silent Bob goes a long way, which is probably why he front-loaded the movie with cameo appearances: Matt Damon, Chris Rock, George Carlin and Mark Hamill (yes, that Mark Hamill) all show up at one point or another. Some of those cameos are terrific, most notably Rock as a professionally angry black director who terrorizes all the nerdy white gofers on his movie set. Others, like Carlin's bit as a hitchhiker who gets results by holding up a sign that says "Will Give Head for Ride," feel forced and overcooked.

Shannon Elizabeth, as the animal-rights activist who gives Jay a series of magnificent boners, has loads of schoolgirlish charm. And Morris Day and the Time, whom Jay and Silent Bob have decreed as the greatest band of all time, appear as themselves to sing "Jungle Love." They may not be quite the greatest band of all time (shouldn't that honor go to Cameo?), but they look and sound pretty damn good.

At times fun but mostly maddeningly uneven, "Jay and Silent Bob Strike Back" feels less like a full-fledged movie than a side project Smith took on to amuse himself and his buddies. There's nothing wrong with that, exactly -- it's just that more often than not, he seems to be amusing himself at our expense.

That's a shame, because while Smith isn't a particularly polished director, it's clear from pictures like "Chasing Amy" and "Dogma" that his instincts are sterling, and he has lots of heart. "Jay and Silent Bob Strike Back" isn't a smug or self-satisfied picture -- Smith is too humble a filmmaker for that -- but it's self-referential to the point of exhausting itself. How many "Gosh, Ben Affleck sure is a big star now!" jokes can one movie comfortably hold?

As funny as Jay and Silent Bob have been in Smith's earlier films, it's just as well that he's planning to retire them. It's time for Smith to stop messing around and start listening to the wisdom of those 'Net nerds. At least they know a third-rate Bill and Ted when they see it.