Step No. 1: When waging political war, keep a camera on your opponent at all times. 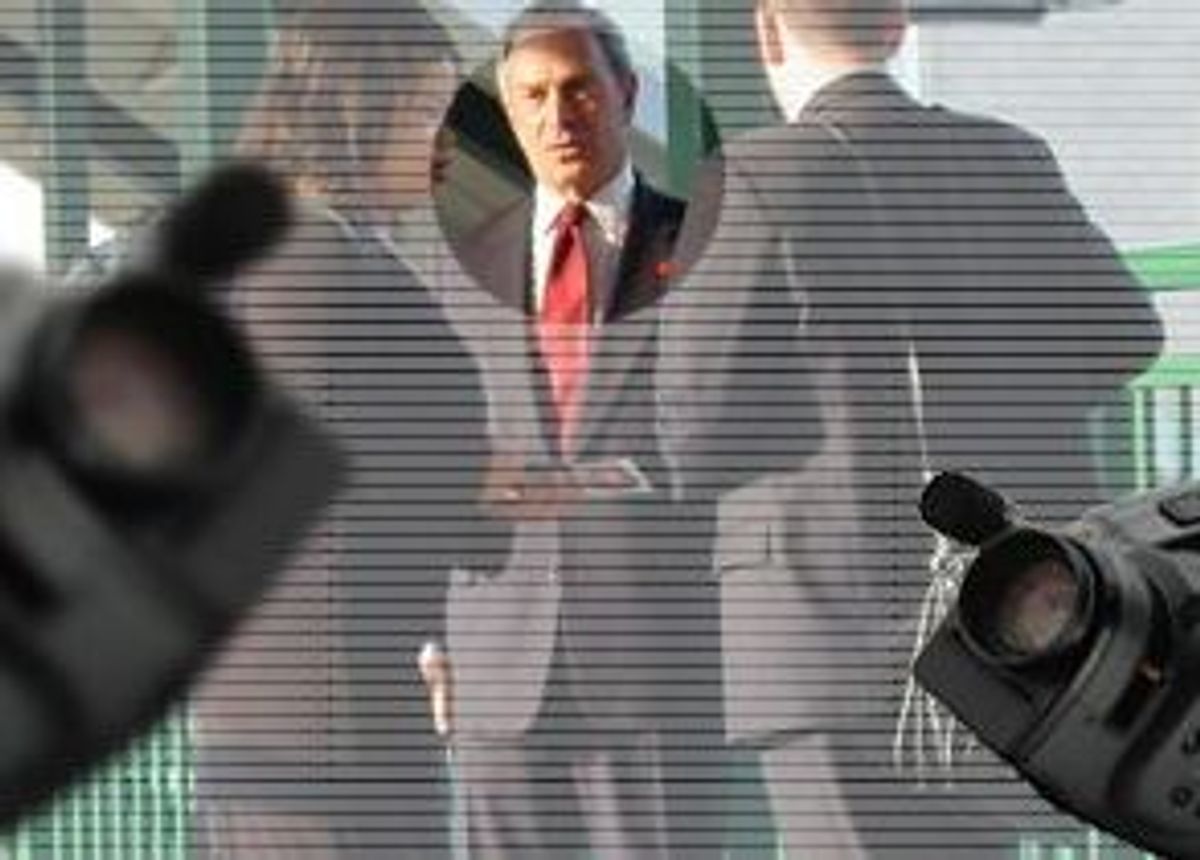 The New York State Democrats gearing up for a fight with the likely Republican mayoral candidate, media mogul Mike Bloomberg, are looking for what they think will be a crucial addition to their team. If they advertised for the job, the posting would probably look a little like this:

As part of the high-tech modern campaign, state Democrats already have been videotaping every word from the mouth of Mike Bloomberg, the newfound Republican who has pledged to spend $30 million of his own money in his run for mayor. Forgoing concerns that tracking is creepy or dirty politics, Democratic officials are eager to have voters hear everything that emanates from a candidate who shoots from the hip. They captured an already infamous crack at a July 19 picnic, where candidate Bloomberg seemed to express support for involuntary Christian school prayer.

"I can only tell you, when I grew up we said the Lord's Prayer every morning and we stood up and made our pledge of allegiance to the flag," Bloomberg says to a small group of women in a discussion of the city's schools. "I don't know how, somehow or other over the years, all of that went away. I never understood what was wrong with it."

What was wrong with it, of course, was that the Lord's Prayer is from the New Testament, which probably would not sit well in New York, which boasts the largest Jewish community in the world. Every one of Bloomberg's potential Democratic opponents slammed him for the comment. "Bumbling Bloomberg; Campaign Crew Dogged by His Headline-Grabbing Gaffes," came the New York Post headline on July 29.

And since that headline, Bloomberg has brought more controversy upon his campaign by saying that storefronts with graffiti'd shutters made poor neighborhoods look like "war zones," and for referring to domestic violence, sexual assault and child abuse as "quality-of-life crimes."

So far, none of the stories about Bloomberg's controversial comments have come courtesy of the New York Democrats' tracker. Reporters are stalking Bloomberg just as ably, if not more so. But according to the state party's spokeswoman, Serena Torrey, once their tracker alerted Democratic headquarters about Bloomberg's comments about school prayer, the Democrats helped ensure that it became a story, with press office staffers phoning reporter after reporter to make sure everyone knew the gaffe du jour.

"The tracker allowed us to give reporters a heads-up that something happened," Torrey says. "We called them and said, 'We want to make sure you know what Bloomberg said today.'" The Bloomberg campaign did not return calls for this story.

In the past, says the Democratic committee's executive director, Chung Seto, trackers have come in more handy as an opposing campaign's eyes and ears than as potential fodder for future campaign ads. In 2000, the New York Democrats utilized a college student, Eric Schultz, to follow around then Rep. Rick Lazio, R-N.Y., the Republican senatorial nominee who was running against then first lady Hillary Rodham Clinton. Seto says Schultz was a huge asset -- even if he was booed, mocked, derided and spit upon.

"It was like being at the event," Seto, who was then communications director for the Democratic Committee, recounts. After Lazio released a budget proposal at a press conference, "Eric played it back to us on the phone immediately. We were able in two hours to turn around and provide a document that disputed his numbers."

Reached at his Midwestern college, Schultz says being a creep-for-hire was "exhausting" and sometimes personally trying. "It was difficult to get used to the fact that you were always in a place where you were not wanted. It's not a comforting feeling."

Lazio, Schultz recounts, went from treating him good-naturedly -- buying him a slice of pizza, for instance -- to pointing him out in the crowds where he would be subject to abuse. Schultz even became something of an issue for the campaigns to debate. "I just think in the end it's a reflection of the character of the Clinton campaign that they feel like they need to harass, and they need to scream, and they need to hire people to try and track me wherever I go and to record everything I do, and to put things in my face and my wife's face," Lazio complained at the time. Countered Clinton spokeswoman Cathie Levine: "I don't know what Rick Lazio is afraid of. Tracking is done in almost every political campaign. What is Rick Lazio hiding?"

It was worth it, though, for Schultz. An "entryway into politics," he calls it. Being the Democratic Party's eyes and ears was especially useful "whenever there was a tug of war, a hot issue that the press was feeding off of." Like when both campaigns were embroiled in a game of chicken about whether they would pledge to refuse "soft money," Schultz says. "Our campaign really needed to know what he was saying so we could respond to it and give the press what it needed to know." (In their first debate, on Sept. 13, Lazio held up a pledge against soft money and demanded that Clinton sign it. After a back and forth in the press, both candidates agreed to ban campaign TV ads funded with soft money -- which Democrats had employed for two months.)

Republican consultant Keith Nahigian -- who worked on Lazio's Senate campaign -- calls following opposing candidates around with a video camera "a harassment tool. You don't get anything off of that. Democrats came up with that a while ago, but tracking people around fairgrounds doesn't do anything but harass." On the other hand, Nahigian says, "It helps if a candidate's not doing well. When people see someone with a video camera following him around it gets people interested so they might come up and shake their hands."

Nahigian says that some of the Democrats' trackers got a little out of control last year, occasionally following Lazio into churches on Sundays and onto the schoolyards where Lazio would drop his daughters off at school. (Both types of events would regularly appear on Lazio's public schedule, it should be noted.) "We even needed to set up a decoy motorcade so Lazio could go on vacation for two days without being harassed," Nahigian says.

Seto says she suspects GOP operatives have been taping Democratic politicians, like Sen. Clinton, as well -- if not as openly, or as frequently.

In that race, the party and Clinton's campaign could work together closely. New York City election laws are stricter than those for New York state contests, however, so it's still unclear what role -- if any -- the party's accumulated Bloomberg cinéma vérité can play in the fall campaign. "We're not ruling anything out," Torrey says. In a way, though, the footage of Bloomberg talking about school prayer might be less effective than hearing others characterize his position. In the recording, Bloomberg is just waxing nostalgic, not zealously frothing about forcing school kids to become members of a religion to which Bloomberg himself doesn't subscribe.

Some say the use of cameras can backfire. In addition to his advance work for the 2000 presidential campaign of Sen. John McCain, R-Ariz., Nahigian worked for EPA administrator Christine Todd Whitman in her first run for New Jersey governor. During that campaign, in August 1993, Nahigian recalls his first brush with Democratic operative cameramen -- and how it ended up working against then-Gov. Jim Florio, a Democrat.

Whitman was about to leave her 237-acre estate in Bedminster, N.J., for an event, when she noticed Nahigian staring at a field. "She said, 'What are you looking at?' and I pointed out that all the sheep in the field were looking at something -- a couple hundred sheep were looking at a bush," Nahigian says. "Then I noticed a reflection from a lens or glass, and I saw people moving. It was a couple guys with cameras." The spies started to move, loading up their van, "so [Whitman] said, 'Let's go!' and we got in the car and started chasing them around. We got their license plate number and everything."

After tracing the van to Florio's campaign, Whitman denounced her opponent's "sleazeball tactics." Florio's campaign -- helmed by James Carville -- acknowledged that the operatives were there to film her farm, for which Whitman was receiving tax breaks, an issue Florio was trying to use against Whitman, painting her as a member of the leisure class. "It actually played really well for us in South Jersey, parts of which are farm communities where they don't like people trespassing on their property," Nahigian said. "Carville played that whole thing wrong."

This year, the Democrats have had trouble finding the right person to stalk Mike Bloomberg, and the position is being filled by various staffers and interns ad hoc. It hasn't been easy, some say. Bloomberg staffers stand in front of them and block them from entering public events.

Whoever fills the job full-time better get used to that kind of hostility; Bloomberg's campaign apparently does not take kindly to opposition. After the New York Daily News noted Bloomberg's sudden uptick in charitable giving the year before he officially launched his candidacy on Aug. 1, Bloomberg senior strategist Bill Cunningham reportedly cursed at and shoved the reporter, Michael Saul, out of a room where Bloomberg was scheduled to speak. "Considering how [Saul] has treated Mike, it is understandable that Bill may have lost his cool," campaign spokesman Ed Skyler told the newspaper in response.

"Whenever someone goes into a campaign event to do opposition research, he or she had better be prepared for some resistance," says Torrey about the job. "But the Bloomberg folks have been relatively generous with our tracker. Even more so, it seems, than they've been with some members of the press."