A rehab of one's own

Gender-specific recovery programs for women are gaining ground, despite criticism of their "warm and fuzzy" approach. 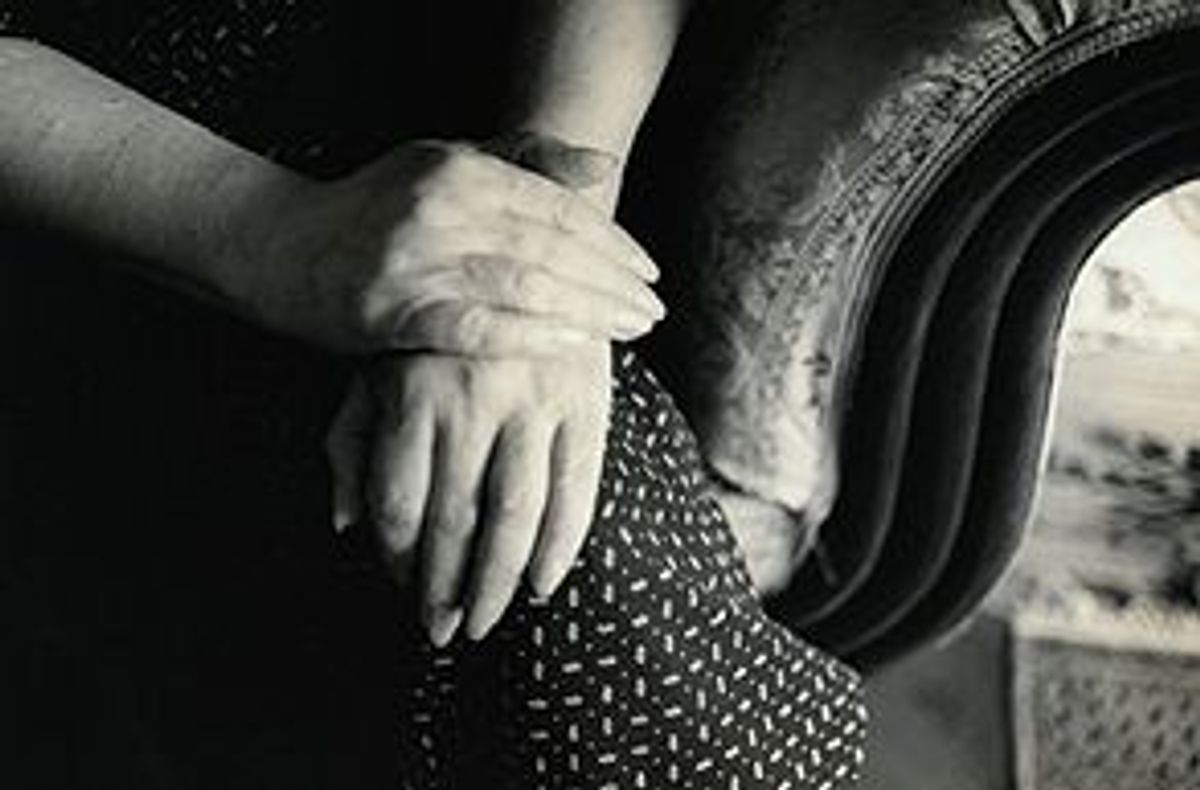 The chairs are the first thing you notice. They are curvy, plush, luxuriously padded -- as far from metal folding chairs as furniture can get. There are fresh flowers on the table near the neat little kitchen. The "12 Steps" hang on the wall, but in a handsome wooden frame, next to misty prints of woodland scenes.

Welcome to the Hanley-Hazelden Center for Women's Recovery, a kinder, gentler -- and gender-specific -- sort of rehab. The 1 o'clock meeting is just getting underway.

"Where are you in this spiral of addiction?" asks Kathleen, a comfortable, maternal-looking counselor, as she points to a diagram set on an easel. Grouped in a circle around her are eight patients, well-groomed women in their 20s and 30s. After a moment, a woman with short hair and dangly earrings speaks.

"I'm in the middle of the spiral. I already hit bottom, and I'm on my way back up."

"What was bottom for you?" asks Kathleen.

"Being in a sick relationship, and wanting to die," she replies matter-of-factly. Kathleen nods vigorously.

The women begin throwing out answers.

Kathleen pivots and points. "Love!" she exclaims. "Love is good, but we can't let it distract us from what we really need to concentrate on -- our own recovery."

"Yeah, it's like -- what's love got to do with it?" cracks the woman with short hair.

"What is love?" Kathleen chimes in.

"A secondhand emotion!" comes the inevitable response, and the whole group joins in an impromptu chorus of Tina Turner's gruff anthem.

Actually, love has a lot to do with it, according to the counselors at Hanley-Hazelden. Unlike men, who usually begin abusing alcohol with their buddies, female alcoholics are often introduced to the bottle by a male partner. "The feelings and behaviors they learn around intimacy are not healthy," says Donna Corrente, the center's director. "That's why we spend so much time talking about relationships."

The program she manages occupies a low-slung stucco building, sheltered by palm trees and staffed exclusively by women. No "fraternization" is permitted with the men's unit, a few hundred yards away.

Located in West Palm Beach, Fla., and barely a year old, the Hanley-Hazelden facility is one of a growing number of "gender-responsive" recovery programs taking root all over the country. Advocates extol them as a long-overdue antidote to decades of neglect of the needs of female addicts. "The idea used to be that you had to confront alcoholics' denial, tear them down and re-create them -- but that approach is disastrous for women," says Christine Saulnier, Ph.D., assistant professor at Boston University. "They've been beaten up enough already by their addiction. To promote an even greater sense of powerlessness and helplessness is just bizarre."

Women-only rehab programs adopt a caring, nurturing tone, and focus their curricula on healing trauma, building self-esteem and learning how to establish healthy relationships. This approach has its critics, however, who charge that single-sex treatment perpetuates gender stereotypes, patronizes its patients and promotes a victim mentality. They take issue with the bedrock assumption of gender-responsive programs: that alcoholism is a radically different experience for women.

According to a report published by the National Institute on Alcohol Abuse and Alcoholism, about one-third of the nation's 15 million alcoholics are female, and women represent roughly the same proportion of patients enrolled in residential recovery programs. Seventy-five percent or more of these women have suffered some kind of abuse or trauma, often sexual in nature -- a far higher ratio than among men in treatment, says the report. In addition, say proponents of gender-sensitive treatment, female alcoholics face far more scorn and stigma than their male counterparts, who have hard-drinking heroes like Hemingway and Hunter S. Thompson to call on.

"We still expect women to be the nurturers, the caretakers, the moral standard-bearers -- and those roles aren't compatible with alcohol abuse," notes Saulnier. Because their drinking is less socially acceptable, women feel more shame and guilt and make more efforts to hide it. While male alcoholics may act out -- getting in bar fights, driving while drunk -- female drinkers typically inflict damage on themselves, says Saulnier, becoming depressed or developing eating disorders or secondary addictions to prescription drugs.

As a result of these differences, supporters say, female alcoholics need a rehab of their own. "We know now that mixed-sex treatment does not work for women, at all," declares Corrente. After more than two decades in "the chemical dependence business," as she calls it, she says she's observed that when the sexes are treated together, the women help identify and explore the men's feelings while neglecting or avoiding their own. (For this reason, she says, men tend to do better in co-ed treatment.)

She also has seen sexual energy between men and women disrupt the work of recovery, creating doubly dysfunctional couples who too often flee treatment together. And Corrente has noticed that when men are present in group therapy sessions, women suppress their stories of sexual abuse and domestic violence -- frequently the very experiences that led them to drink.

Medical research has, in fact, found that the physical effects of alcohol are different for women: They get drunker, faster, on the same amount of liquor as men, due to their smaller size and higher proportion of body fat (which leaves less water in which to dilute alcohol). An enzyme responsible for breaking down liquor is less active in women's stomachs than in men's, and some researchers even suspect that women's fluctuating levels of hormones may make them more easily intoxicated at some times of the month.

Over years of heavy drinking, these biological differences can have dramatic health consequences. Women's alcoholism advances faster than men's, and with more devastating results: They are more vulnerable to alcohol-related liver disease, heart damage, brain damage, circulatory disorders and cancer. Female alcoholics have a harder time with the activities of everyday life, and they're more likely to be involved in accidents and to commit suicide.

But the claim that women's alcoholism is an utterly different emotional and psychological experience is far more fraught, and many in the field aren't buying it. "I'm skeptical of the idea that men and women are such profoundly different species that they require a qualitatively different approach to treatment," says Sally Satel, M.D., a Washington addiction specialist and author of "P.C., M.D.: How Political Correctness Is Corrupting Medicine." "What alcoholics need is their self-respect, a sense of the future, some skills -- and that goes the same for women as it does for men."

Satel is especially critical of the warm-and-fuzzy approach the gender-responsive programs take to treatment. "Self-esteem is the product of staying clean, getting a job and repairing the relationships you damaged with your addiction," she says. "It doesn't come about because someone patted your head and said, 'Oh, isn't it wonderful that you're in a treatment program.'" In fact, she says, it's "patronizing" to assume that women can't handle a rigorous program of recovery.

The Hanley-Hazelden center offers several inviting targets for Satel's critique. Just off its main hallway is the "pillow room," used for group therapy sessions: small, low-lit, filled with dozens of cushions, it resembles nothing so much as a baby's nursery. Staff members talk about engaging patients not in confrontation, but "care-frontation." And sometimes the center's activities go beyond banality to hoary cliché: A recent "healing arts" workshop, for example, involved fashioning a womb from a hunk of clay.

"The womb is the essence of womanhood," rhapsodizes a counselor. "The project gives patients an opportunity to honor their femininity."

A handful of small studies have suggested that women are more likely to enroll in a single-sex recovery program, more likely to stick it out and more likely to remain abstinent once it's over. It does make a certain amount of sense that women who have been mistreated by men in the past might prefer to do their healing outside of men's intimidating or inhibiting presence. And it seems self-evident that berating and humiliating people at the time they're most vulnerable might not be the best way to help them -- at least not all of them.

Then again, there's no reason why recovery programs couldn't begin to be responsive to that other gender, as well. Perhaps we'll know that we've emerged from alcoholism's dark ages when a respectful, compassionate approach to treatment isn't for women only.