Jesse Helms trashed the U.N. and drove our allies nuts. And the Bush team will keep his go-it-alone ideology alive even after he leaves office. 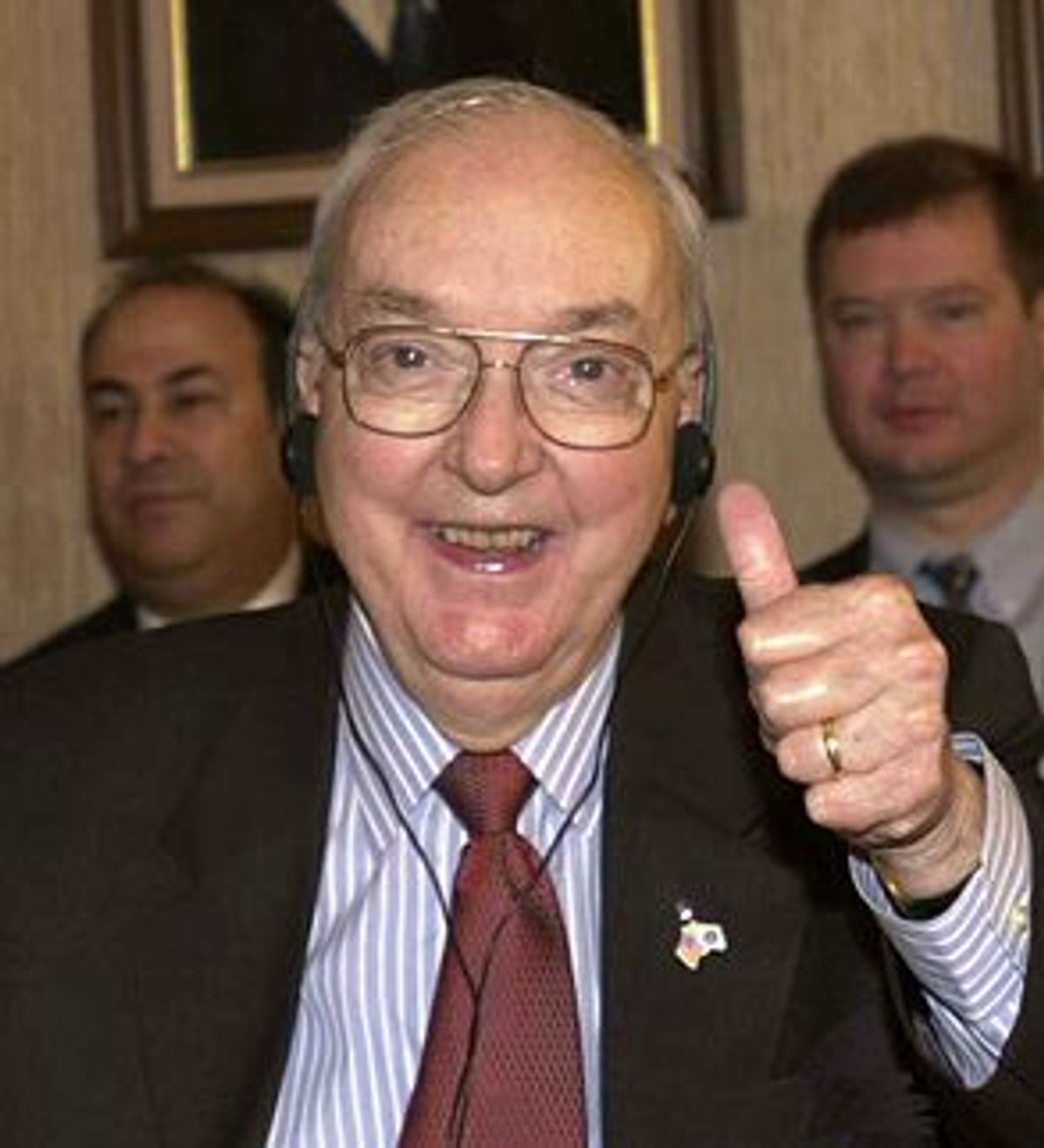 Future historians may find it difficult to believe that for much of the momentous last decade, American foreign policy was held hostage by a churlish septuagenarian bigot whose view of the world made Rush Limbaugh's seem suavely cosmopolitan. Books have been written about the role of the individual in history, and North Carolina Sen. Jesse Helms will doubtless go down in future tomes as the lone destroyer of one of the most promising diplomatic eras of the 20th century. And his retirement, announced in a North Carolina television appearance Wednesday night, can't undo his impact on the world.

Even before he became chairman of the Senate Foreign Relations Committee, Helms used and abused his power as ranking Republican on the committee to turn American diplomacy into an oxymoron, making the world's only superpower the object of sniggers, incredulous exasperation and dogged opposition among its allies as well as enemies.

Helms was widely reviled by liberals for his atavistic views on race, affirmative action and gay rights. "If the homosexuals would stop doing what they are doing, an end would be put to all future cases of AIDS," he once said memorably. An ardent segregationist, in 1996 he played the race card in his last race with Harvey Gantt, an African-American, with a nationally attacked television ad featuring a white worker ostensibly rejected for a job because of his race.

But his lasting legacy is in the area of foreign relations. Helms did not have the excuse of constituent pressure for this crusade. A North Carolina reporter who followed Helms on the campaign trail in 1996 told me he could not remember a single appearance at which either the candidate or the voters had raised a foreign policy issue. In a sense, this lack of constituent interest explains his success.

Just before he died, ex-Sen. J. William Fulbright, D-Ark., explained to me that the reason he lost his Senate seat was that his opponent had "outed" him to the voters of Arkansas as chairman of the Foreign Affairs Committee, as irrelevant and suspicious to down-home voters as the Politburo. "You don't think Claiborne Pell goes around telling Rhode Island that he's got the job now, do you?" Fulbright chuckled. Indeed, when Helms ran in 1984, he promised North Carolina voters that he would not take the Foreign Relations chairmanship but would stick to Agriculture -- a much more potent interest for his state. Nobody appeared to notice when he broke his word.

It is of course quite possible to have profoundly reactionary principles and a wide knowledge of the world. Henry Kissinger's name comes immediately to mind. What made Helms a bigot, as opposed to a mere reactionary, was his know-nothing outlook on the rest of the world. While he held nations hostage to his small-minded views, he understood little about them, having only personally visited Mexico. But Americans tolerated his ignorance. In most other countries, if the equivalent officeholder had, as Helms did, introduced Benazir Bhutto, prime minister of Pakistan, on the Senate floor as premier of India, and boasted that he had had a 90 minute chat with her about Indian affairs, then he would have been laughed out of office. In Washington, those who care about such things were thankful he got the right subcontinent.

More disturbing, they groveled in the face of his notorious vindictiveness. Helms could and did hold up or veto ambassadorial appointments, and used the threat to get his way. In the course of his vendettas, crucial ambassadorships across the world were left unfilled, and capable diplomats left the State Department.

But his principles were ultimately fairly flexible, subject to political expedience. One could respect a thoroughgoing, principled bigotry, but he was as unctuously flexible as all those so-called liberals who fawned over him and pandered to his whims -- notably President Clinton and Secretary of State Madeleine Albright.

For example, when Democrat Harvey Gantt almost defeated him in 1990, Helms reconsidered his attitude toward Israel. Up till then, it had not been his issue (he was about as pro-Israel as any of his good ol' boy constituents.) But when he saw the money flooding into his opponent's war chest from New York, it took only a brief call from the American Israel Public Affairs Committee to make the senator one of the most pro-Israeli stalwarts on the Hill. He went from voting against every foreign aid bill to being the Israel lobby's attack hound in the Senate.

As he crafted the Helms Burton Act, for instance, allowing Cuban exiles and others to sue in U.S. courts for reparations for nationalized property, the men from AIPAC dropped by to see him. Palestinians in the U.S. were rubbing their hands with glee at the prospect that the law might let them sue Israel for the property expropriated in 1948. Helms' office took the hint, and inserted in the bill a clause that its provisions did not apply to "any state created by a decision of the United Nations." That of course meant Israel.

The deference to the U.N. was ironic, however, because it was on that body that Helms left the most lasting scars. He genuinely sees it as an internationalist plot against American sovereignty, but sadly, instead of confronting him, many Democrats appeased him. They took him at face value when he claimed he wanted to reform the world organization. In fact, he wanted to destroy it, but probably suspected that even an American public opinion ignorant of foreign affairs might draw the line at that. So instead, he kept the U.S. from paying back dues and current assessments with a series of unreasonable amendments and demands.

In fact, he achieved much of his agenda, which was not the reform of the U.N., but its death by a thousand cuts. Its staff, faced with a hiring freeze and a pay freeze, are aging and abraded into complaisance, while the U.S.-mandated zero growth budget hampers the new initiatives that everyone agrees the modern world needs. Helms ensured that the organization is continuously anticipating American reactions and all too often preemptively capitulating.

Following a supposed deal to pay the back dues in exchange for various U.N. concessions, bemused right-wingers accused him of going soft on the world body. In fact, Helms assumed the other members of the U.N. would not grant any concessions. And when they surprised everyone by going along, Helms' allies predictably raised a new road block -- now tying payment of the belated, laboriously agreed amount to a guarantee that Americans will not be prosecuted by the International Criminal Court.

Helms also deserves much of the credit for the U.S. failure to ratify the ICC treaty, the Comprehensive Nuclear Test Ban treaty, the protocols against the use of child soldiers, or to sign the International Convention on the Law of the Sea, the International Land Mines treaty, and so on. But many others can share the blame for decisions that made the world a much more dangerous place.

Now the Bush administration has embraced many Helms priorities, but the Clinton administration didn't give him nearly as much trouble as it might have. Rather than confront him, or go public on disagreements, Clinton's people pandered to his every whim. When he decided he did not like U.N. president Boutros Boutros-Ghali, then-U.N. Ambassador Madeleine Albright danced before Helms like Salome with the unfortunate Ghali's head on a tray -- thus ensuring her pain-free transition from U.N. ambassador to secretary of state. And all these years later, Kofi Annan has still not gotten the money the U.S. promised him.

But at least Helms, with his one trip to Mexico -- which the Old South always coveted as an annex to the Confederacy anyway -- had excuses for his parochialism. Clinton, a Rhodes scholar, and Albright, multilingual child of European refugees, had no such excuses. Nor did all those Democrats who have regularly come to order when Helms rang the bell. Helms has been important, but he could not have done what he did without their support.

And while crocodile tears and tasteful political epitaphs may follow his Wednesday announcement, perhaps only a few -- Jonas Savimbi, Ariel Sharon and a handful of others -- will lament his going. The rest of the world will look forward to a new, saner America. On the other hand, they may be too optimistic. While Clinton-era diplomats used Helms as an excuse for their troubles on the world stage, the Bush administration embraces many of Helms' international prejudices and eccentricities outright. Helms will be gone after 2002, but not forgotten.