Sorcerer of the lens Pierre Molinier's self-portraiture is the stuff nightmares are made of. 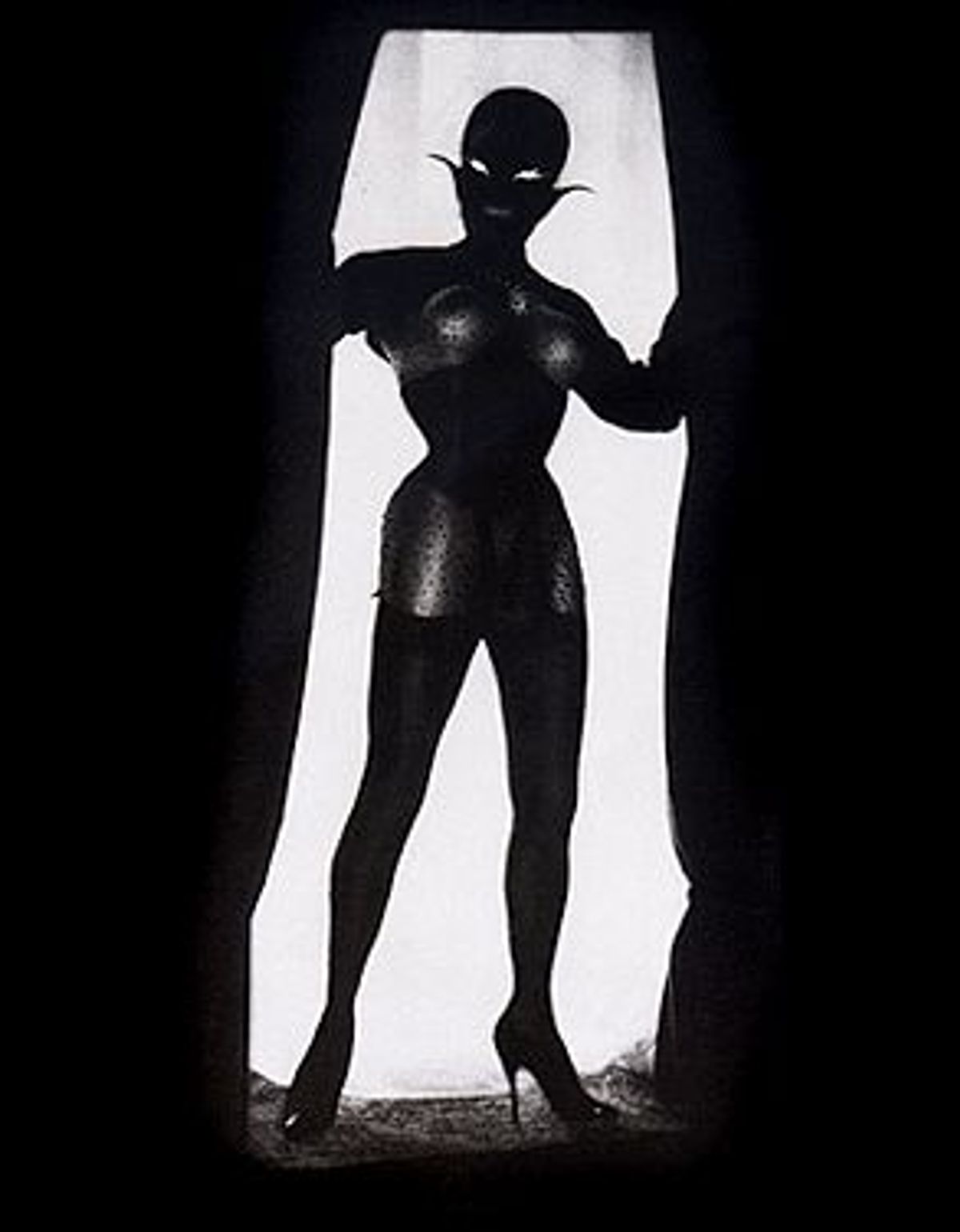 What is it, this specter of evil gazing at us with glowing eyes? Clad in a form-fitting darkness suggesting the vague outline of stiletto heels, garters and bustier, it appears before us both feminine and malevolent. Pulling back ink-black curtains to reveal itself as would a conjurer, it calls to mind those nightmare figures that hover in the corner of your vision during sleep, readying to pounce as you are paralyzed with fear. Like the knife-wielding dwarf in Nicolas Roeg's "Don't Look Now," or Bob, the leering killer crouched by the side of Laura Palmer's bed in "Twin Peaks," its very presence seems pregnant with the promise of murder.

The author of the image, and its gender-bending model, was the French surrealist photographer Pierre Molinier, a suicide at age 76 in the Year of Our Lord 1976. Molinier, a sorcerer of self-portraiture who longed to be a lesbian and who created hundreds of pictures wherein he explored with great sensuality his own transvestism, titled this particular photo "Le Chaman" ("The Shaman"). There's also a variation of this picture in which the same shaman stands before us, but this time with a full erection as well as large breasts. They're a peculiar pair of prints amid the perverse panoply of Molinier's work -- an oeuvre rife with fetish shots of Molinier by himself, in heels and stockings, fucking himself with a dildo or sucking his own cock. His was a sexuality turned on itself, yet still primarily heterosexual. The shaman was the projection of what he wished himself to be.

Why a shaman? In "Sexual Personae," Camille Paglia defines the shaman as "an archaic prototype of the artist, who also crosses sexes and commands space and time." She gives, as an example, the blind seer Tiresias from Greek mythology, whom T.S. Eliot describes as an "old man with wrinkled dugs."

Molinier was more old man with wrinkled dugs than he was a creature commanding space and time. A small, funny looking fellow, he always had the countenance of an elderly man, even when he was younger and in the army. Certainly, he was dangerous (he once shot at his cousin and did some time for attempted murder), but you wouldn't know it by seeing him. Rather, you'd take him for the village pervert, the one with a pocket full of candy and drool running down his chin. This same Molinier dreamed of being beautiful, powerful and a deadly practitioner of the black arts: a shaman. In the world he created for himself, he became one.

Molinier, whose work has been compared by commentators to that of Man Ray and Hans Bellmer and who would after his death be honored by a major exhibition of his work at the Centre Pompidou in Paris, lived for more than 40 years in the same pigpen of an apartment in Bordeaux. The apartment served as Molinier's dwelling, his studio and his photo lab. It was also his cum-stained temple of narcissism. Mirrors lined the walls and the ceilings. Dildos, self-made sex toys and handcrafted love dolls shared space with Molinier's box camera and his bizarre inventions for developing film, his techniques for which remain shrouded in secrecy.

There were female masks to hide his face in, and an endless array of fetish clothing and sexual prostheses -- like some odd matrimony betwixt Frederick's of Hollywood and "The Cabinet of Dr. Caligari." In the middle of his main living space, there was his filthy altar of self-abuse and sometime stage: his bed.

The writer Jean-Luc Mercie in the monograph "Pierre Molinier: Une retrospective," as published by the Galerie Kamel Mennour in Paris, quotes Molinier as stating his three passions in life to be "painting, women and guns." Like Man Ray, he begins his artistic career as a painter only to later relinquish its primacy in favor of photography. Many of his paintings bear a striking resemblance to the effects he was able to achieve through cutting and pasting the legs and buttocks to his creations and photographing them over and over again so that they have the seamless quality of paintings. Some of these use the faces of female models or of his female masks as centerpieces, such as the photos "Hanel Sechs," "L'enfant homme," "Toi, moi" and "L'etoile de six." The result is similar to some modern approximation of the Hindu god Shiva, the destroyer of worlds. With so many legs twisted about, it could be a black widow with a woman's head.

Nevertheless, one suspects that Molinier could only find satisfaction in self-induced climax. In many of his photos, he manipulates shots of himself in near-drag so he is sodomizing his double. On the masked face of the "dominant" Molinier in these pictures, he seems to be cackling with delight.

According to legend, Molinier would collect his semen in a stocking and varnish his paintings with it. (He never stopped painting completely, it's said.) When Andrè Breton hailed him as a fellow surrealist, Molinier said he was more of a magician, and the idea of Molinier hoarding his own milky discharge for use in his secret rites of photography is an occult conception on par with witches using menstrual blood in casting a spell. There's no evidence that I've seen that Molinier believed in or worshipped Satan, but he transgressed taboos to such a degree that he might as well have. There's a biography of him in French that translates as "A Life in Hell." That title calls to mind the cry of Milton's Satan that "myself am Hell, and in the lowest deep a lower deep still threatening to devour me opens wide." Molinier created his own Hades wherein he was his own Morning Star.

I believe this was the source of his madness and his genius. Georges Bataille posits in his book "Eroticism: Death and Sensuality" that eroticism is a solitary activity. For the most part, it was for Molinier, who seemed to embody Bataille's explication of the contradictory nature of eroticism: "On the one hand eroticism is the solitary fault, the thing which saves us only by separating us from everybody else, the thing which saves us only in the euphoria of an illusion, since when all is said and done that which in eroticism bears us to pinnacles of intensity also lays the curse of solitude upon us."

Molinier's "euphoria of an illusion" came only after hours and hours of transmogrifying his image into a thing of great beauty -- a creature both masculine and feminine, a Penthouse Pet with a stiff weenie. His effort was essentially a failure. One need only compare Molinier's likenesses to those of actual women to see this, or to note that his most arousing artistry occurs in his photographs of the fleshy transsexual SkinDo, whose plump, curvy body reminds one of the harems of Ingres. But SkinDo has the body and the face to pass for a chick. Molinier had neither, really, though he did have nice legs for an otherwise ugly old man.

Maybe that's why Molinier, in his 70s, finally stuck a gun in his mouth and pulled the trigger: the fact that he could never really cross that Rubicon and become the woman he wanted to be. There's no satisfactory explanation for his suicide, save the theory that prostate cancer had robbed him of his precious virility, and Mercie says that's apocryphal. Of course, his father had committed suicide when Molinier was 44, which might have planted the seed. But the message he left scrawled on his door suggests that he merrily threw himself into the abyss: "I'm bloody bored of living," it said, according to Mercie. "And I am killing myself voluntarily! And having fun doing so." What an odd little madman/magician he made. How astounding the product of his twisted life.