In the hit computer game Max Payne, death comes with a cost: Your own tortured soul. 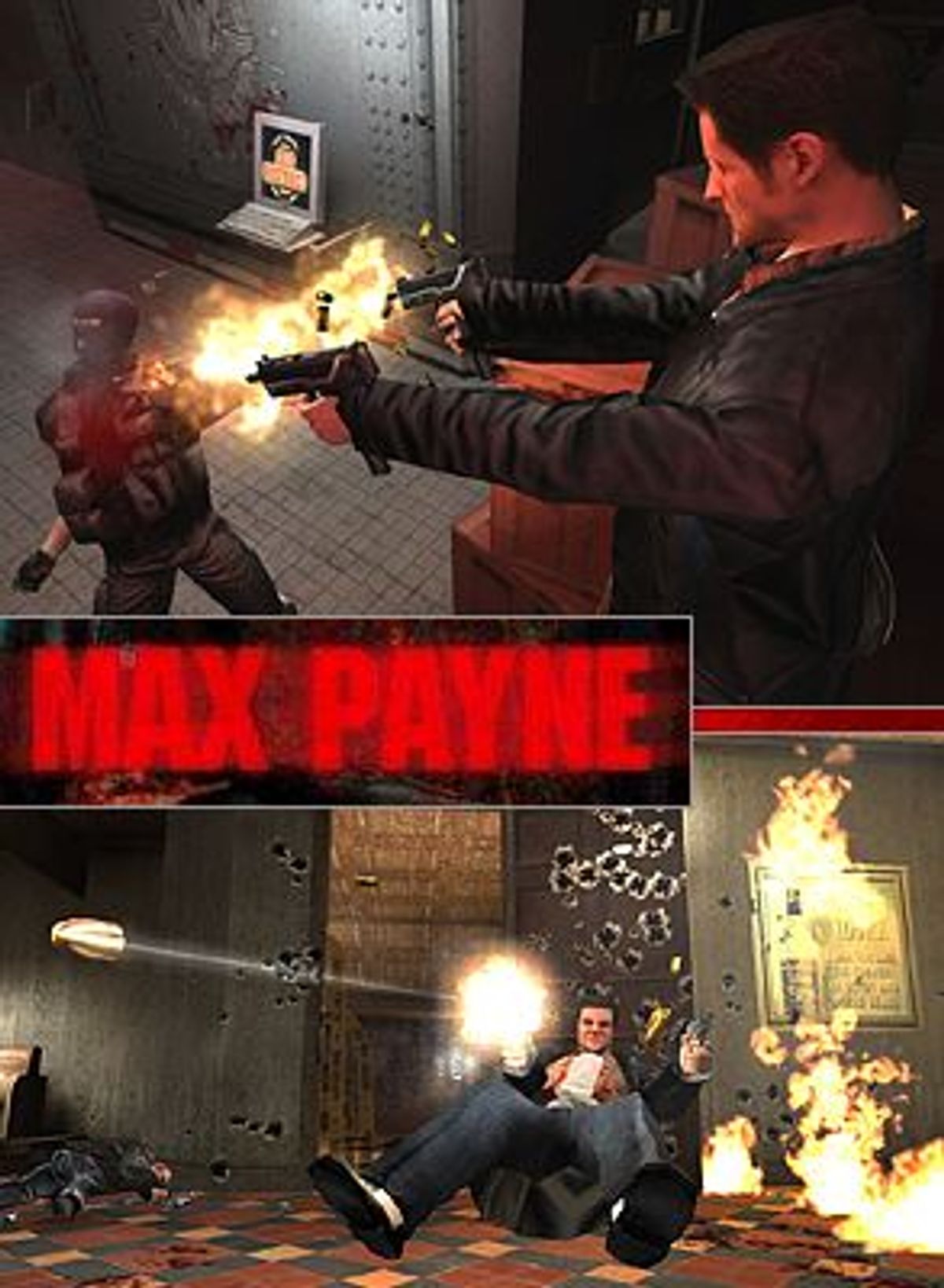 Here's how Max Payne enters a room that's crawling with armed mobsters: with a Beretta 9mm in each hand, transcendentally pissed off. Here's how Max Payne survives, even when the wiseguys open up on him with their own weapons: leaping over the threshold, spiraling sideways in midair, sailing through the web work of their oncoming slugs. Here's how Max Payne prevails, outgunned, outmatched: unloading both clips like lightning, a lead swath that shears through every thug before they can even fix a bead on him, blowing them backward, arcing them to the concrete in slow-motion death pirouettes.

This is the aptly titled Max Payne, a new third-person shooter from Finnish studio Remedy and U.S. publisher GodGames. The story of one wronged cop's revenge on the New York underworld, it's been a hit since the moment it went on sale in early August. The PC game already has a movie adaptation in development, and near-universal acclaim from gamers.

In the last few years of its development cycle (it was in production as far back as 1996), it's sort of been the evil twin to "Black & White," Peter Molyneux's long-promoted, oft-delayed game, which promised all kinds of innovation that would totally reinvent the standard of future games.

But where Black & White was always billed as a conceptually ambitious game that would play on themes of morality and the nature of religious belief, the promoters of Max Payne made no such airy claims. Their innovations were all about body-count coolness -- Max Payne was a game that would not only replicate the two-gun heroics of John Woo's classic Hong Kong films, but also the "bullet time" scenes from "The Matrix," every bullet path articulated, every combatant slowed down into a three-dimensional action stance. No moral deliberation going on here. Just an excess of exit wounds and bullet casings; which, judging by the popularity of story-free, shoot-happy "twitch" titles like Quake III and Counterstrike, is the way just about every gamer wants it.

But that's not exactly what they got.

"How to turn off that small voice inside your head," Max muses in a voice-over late in the game, after finally unearthing the individual behind a horrific conspiracy and his own personal tragedies, "[which] started to whisper that you should be glad, that now, if not before, your revenge was justifiable on any conceivable moral scale?" He's referring to himself, but he could just as well be addressing the player, who has spent all this time ventilating scores of henchmen with little remorse. "That small voice proved, beyond any doubt, that I was damned."

The game delivers on the ultraviolence and slo-mo bullet time, to be sure -- but even then, not satisfied to let the player wallow too much in this kill-fest, it pauses to comment on its own absurdity. Wracked by a night of demonic hallucinations, at one point, Max imagines that his murdered wife lets him in on the truth: "You're in a computer game, Max." And for a crazed moment, all his inexplicable actions up to then make sense to him: "[T]he endless repetition of the act of shooting, time slowing down to show off my moves. The paranoid feel of someone controlling my every step."

Interwoven with a realistic, compelling story, a postmodernist's sense of ironic wit and, even more startling, a strong moral tone, Max Payne is the kind of shooter that most gamers have been avoiding for years. Sure, other titles have infused the first- and third-person shooter with substance. The story-driven Half-Life was a critical and commercial success -- while still anchored to the sci-fi, "Alien"-esque elements recycled by developers since Doom. Gameplay in the cerebral, award-winning Deus Ex is so open-ended, it doesn't even qualify as a shooter (you can complete it without firing a single bullet), while the stylish, tongue-in-cheek No One Lives Forever was a critical favorite (although at retail, only a modest success). But if the initial sales deluge holds up, Max Payne may be the one that finally advances the genre, and our expectations for it -- and in the process, it may be the game that finally forces the industry to grow up.

Admitting this doesn't come easy for me either, as it turns out. Max Payne was one of the games I slagged a couple of years ago (it was then in development), in a post-Columbine essay on the gaming press's oblivious fawning over gory exploitative shooters. My initial distaste was bolstered by the game's provenance as a title from GodGames. The publisher was notorious for its failed releases, for its failed promises to transform the industry and above all for its annually embarrassing Promised Lot, which had little to do with promoting its games, but did end up becoming a perfect microcosm for new economy excess, in which socially inept techno-weenies bankrolled strippers and rock groups in a desperate attempt to effect coolness. For the longest time, the long-gestating Max Payne seemed part and parcel of all that, a dimwit shooter with little appeal to anyone outside the deathmatch-and-Cheetos subculture of hardcore gamers.

I was disabused of that assumption pretty much the moment Max Payne began: As related in flashback, the New York detective returns to his New Jersey suburban home to find his life eviscerated. Upstairs, rage-high drug addicts are slaughtering his wife and child. While Max tries to save them, he's sobbing. This must be an industry first: While they've endured every variation of physical pain with scarcely a grunt, has there ever been another action protagonist struck with enough emotional trauma during gameplay to actually cry? I can't recall any.

Spirit broken, Max submerges himself in his work, infiltrating a New York mob family as an undercover DEA agent. (Most of the story is related, not in typical video cut scenes, but in evocative graphic novel-style panels.) A series of setups leave Payne stranded in the underworld, mobsters (and now cops, too) after him, with no one left alive to confirm his law enforcement status, and no choice but to fight to the surface. Somewhere along the way, he gets enmeshed in a larger conspiracy. Like some of the best noir thrillers (and this is noir in the true filmic sense, right down to Max's deadpan, Hammett-esque voice-over), the conspiracy is top-down and all-pervasive, suggesting an entire society decaying in a hothouse of corruption.

This includes Max himself. The story accommodates two literal trips inside his head, during which the player has to guide him through the maze of his own memories and nightmares. But this is not just an excuse for weird graphic interludes. Stumbling through madness-distorted rooms of his Jersey home, accompanied always by the wails of his dead family, Max has to uncover moments from his past that flesh out the narrative -- while we get ambiguous, disturbing glimpses of his own back story.

To be sure, most gamers are not here for the plot, or the fever dreams, but for "Bullet Time," Max Payne's temporary (and trademarked) ability to decelerate the world to a crawl, while he himself can still keep firing in real time. Coupled with "Shootdodging," a multidirectional dive that gives Max additional maneuverability during this temporal spasm, it becomes a necessary method for defeating multiple opponents. (As to why he's able to do this, the game manual helpfully compares it to how top athletes can enter a "zone" of superhuman ability: Max as Kobe Bryant with a Colt Commando.)

Ultracool, no question about it. But more than that, these features transmute what is essentially a cinematic conceit into an interactive function. John Woo has said that he often improvised the action scenes in his Hong Kong movies, right there on location. In the director's commentary for "Hard Boiled," for example, he describes the kind of role-playing that he employed on the set. He'd put himself in his hero's position, then map out the intricate moves he would make (leaping over a table, say, or sliding down a staircase) to take down his foes. In effect, the special features in Max Payne enable you to recreate Woo's directorial method, but as a strategic approach within the game. You can act as both star and auteur here; careless choreography doesn't just mean a mediocre action scene: Squander your Bullet Time with gratuitous slo-mo moves, or make Max shoot-dodge himself into an open area, and your leading man will probably end up dead.

It's the innovation that may finally break down the distinctions between computer games and film. Too bad it comes at a cost, for this particular game. The violence in John Woo's Hong Kong films was always rooted in deep emotional yearning, for brotherhood, justice and a better world. Few moments in Max Payne approach that kind of emotional effusiveness, and the unremitting gunplay begins to seem like an arid version of what Woo really had in mind. (But then, that's also true of all the Hollywood films that cynically ape Woo's style, without even attempting to match the moral sensibility that gives it substance.)

The same can be said for Max Payne's story (written by Remedy staffer Sam Lake), which, while ambitious for a computer game, doesn't always hold together. Every now and again the narrative loses its connective tissue; a few supporting characters are introduced, only to be discarded without payoff, and character arc is nonexistent. (The gravitas of the story is further hindered by a couple of dumbass arcade affectations: Max restores his health by ingesting painkiller tablets, and earns more Bullet Time every time he adds to the death toll.)

But all this means that it's now possible to judge a game on the same terms as a film, and compare them with a common artistic vocabulary. Other developers will follow the path laid by Remedy, competing to surpass Max Payne's success, incorporating other film techniques into their interface. They may even expand upon the subversive themes the game makes possible, by telling the story of a man who really, fully wants to set things right.

"Worried experts already see a danger in the company's success," a newscaster announces, as Payne prepares his final assault on a pharmaceutical company's towering headquarters. "[The corporation] is about to become an even bigger monopoly than Microsoft ever was."

Could there be a better motive for wholesale slaughter? Enter Max Payne, trustbuster with hollow points.