Mothering without a net

Our house by the beach is a car. We are homeless. 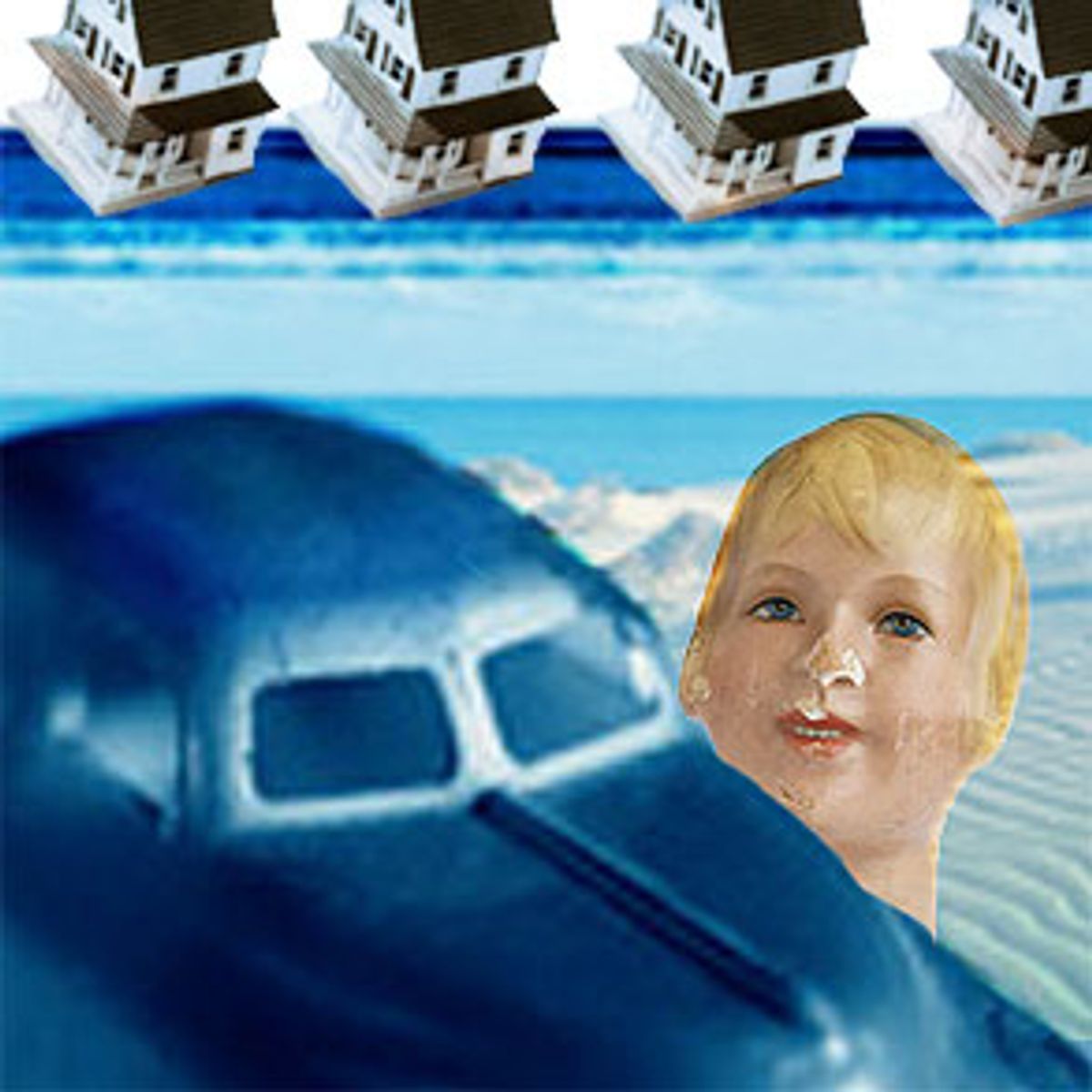 The click of the door handle is entirely too loud as I pull it to peer in and check on my three sleeping children. They are all breathing. In fact, they look peaceful, sleeping there in the back of the station wagon, under the yellowy light of a street lamp.

I smooth the curls on my daughter's face and gently close the door. Walking through the back door of the kitchen, I look back once and then, all right just once more. I smile at the cooks -- they'll keep an eye out the door for me -- as I rush through the kitchen and grab the food for my customers from under the warmers.

My last table leaves after 11 p.m.. I thought they would never finish. Oh, to have that kind of time to linger over a meal. It's been so long since I've enjoyed that kind of freedom. I carefully place the wine glasses in the bus tub next to the dessert plates and haul it all down the stairs. My mother would tell me to make more than one trip, but I'd always rather make one, long, painful trip than two or three.

I tip out the bartender and head for the small parking lot behind the restaurant, where, I am told, my children are still blissfully asleep. Again, I open the door, ever so carefully, and collapse into the front seat.

"Hi, Mom." Startled, I whip around to find Matthew, the eldest, who is 5, blinking his eyes awake. "How was work?" he asks.

"It was fine," I reply. "Very busy. It's late, though, you should go back to sleep. We'll talk in the morning."

"OK." Within seconds he is out again.

Living in the car doesn't seem to faze him. Oh sure, he asks why we have to keep sleeping in the car, but my answer -- plain and simple -- that I don't have the money yet to get us an apartment, seems to suffice, and he doesn't whine about not having a television. Well, we do have a television, actually. It was a graduation present from years before and it's tucked in front of the passenger seat. I tried to sell it, but it wasn't worth much, so I decided to keep it. A last vestige of middle-class life. I was a middle-class housewife once upon a time.

Unfortunately, being middle-class only suited me and the children. My soon to be former husband wanted to live in the woods. I was game for a while. I had grown up on a farm, so the outdoors was not foreign to me. But our ideas of living in the outdoors soon clashed -- hard.

"I found an awesome cabin," he said to me over the phone one day. "Pack up the kids and come up. It's a nice town; you'll love it."

I stayed behind to store some of our unnecessary, much hated "material belongings" in my mother's house. Then, always ready for an adventure, we headed up north. Very north. The far north of Maine. A place where the majority of accepted currency was Canadian.

Pulling up to the cabin in the middle of the night, I felt my stomach drop to my knees. The cabin was a tarpapered, uninsulated shack with a small wood stove. There was no electricity or running water.

My husband has lost his mind, I thought to myself. Ever cheerful, though, I unloaded the kids and we began our adventure. I should have known that it was to be one of many.

Tonight I wince as I start up the car (I need a new muffler); I don't want the kids to wake up. My plan is to stay down at the beach tonight. The police know me -- I wait on them all the time -- and they let me park here as long as I leave early. On the weekends we stay in the campground, where there's a playground and a shower included in the deal. We also cook out and roast marshmallows (a truly cheap source of entertainment at 79 cents a bag).

I pull up alongside the beach so I can look at the water. I always wanted a house on the water, I joke to myself, and now I have one -- my bedroom overlooks a lovely beach.

Cramped in the fetal position in the front seat, while the kids are stretched out in the back, I look out the windshield and yell at God in my head. But what's He going to do? There are far bigger problems in this world than our living in a car. We are healthy, we are strong. So I yell silently at my ex-husband instead, without expecting a lot of help there either. I fall asleep with my head on the steering wheel, waking up a few hours later to read by placing my head on my jacket in the passenger seat, the gear shift jammed into my stomach.

Although we are living in my old Suburu wagon, I feel reasonably fortunate. My daughter is well, after a horrible attack by an untamed husky -- just one relatively small part of the "Up North Experiment," as I have come to call it.

The dog, a neighbor's overanxious sled dog, bit her face, arms and shoulders -- actually, tore apart would be more accurate. Of course she was terrified of dogs after that, but my ex-husband chose to keep his sled dogs after the accident. That was the straw that broke the camel's back -- not the lack of water, not even the fact that he refused to get a job. ("Thoreau didn't have a job," he would say.) It was his choice of dogs over children. I couldn't believe it.

After that final blowout, I packed up. With about $50 in my pocket, tips saved from bartending at a local nightclub, I headed to the beach. I knew life had to be better at the beach. And it is. I don't always believe it, but it is cleansing and terrifying all at the same time.

The cooks leave the kitchen door open and help me watch the kids while they sleep. When they're awake, I split my tips with a couple of college girls who've agree to help me out. The girls take them for walks and to the beach. It's summertime here on the coast of Maine, and the weather is nice. When it's slow or rainy, my boss lets them play in a separate dining room.

Because I wait tables, I have the day free to take the kids to the ocean, the library, the laundromat. We walk around town and people smile at us. They don't know how poor we are. They don't know we live in our car. I applied for food stamps, but I don't qualify. I make too much money.

Sometimes I think it's more expensive to be poor than to be rich. I don't have a refrigerator, so I can't buy things like concentrated juice for $1 and make a pitcher to last for a couple of days. I have to buy individual servings at a $1 apiece. The kids have developed a taste for water.

I found a truck stop that will let me fill up my water jugs. It has showers for the truckers and I pay for one so that we all can take one communal shower. We go there first thing every morning.

I am absolutely committed to getting an apartment by the time my oldest is set to start kindergarten in a couple of weeks. The pile of cash in the videocassette box in my glove compartment is growing, and with a little luck it will be enough for the security deposit and first and last month's rent. The apartments I'm looking at are around $550 a month -- quite a bit in a one-horse town like this. There isn't a lot of industry besides the tourist trade, although there is always canning fish and working at McDonald's.

I would settle for a smaller and cheaper apartment, but most landlords won't consider letting four of us live in a studio or one-bedroom. So I have to find a bigger one, even though I can't afford it. What a Catch-22. I can afford a smaller apartment but no one will let me live in it, but my car, for some reason, is just fine, even though it's smaller. At least the car is paid for, although it's not insured. I helplessly hope that if I ever get in an accident, it won't be my fault.

While I am optimistic for the future and set on getting through this (there's a reason for everything, right?), I cannot contain my anger sometimes. Sitting on an old log, watching the kids play in the surf, I am almost shaking with pain and fear and rage. How is it possible that this is what my life is supposed to be like? I went to American University, damn it! I worked in the U.S. Senate! I am smarter than this -- I have to be.

But maybe I'm not. What kind of mother would put her children through a life like this? What kind of parent would make her children endure a life without ... without what? Without television? Without electricity? Without space? Just without. I am sickened by my selfishness. How dare I think I could provide a better life? I'm a loser, with or without my nifty credentials. There are people who didn't finish elementary school who provide better lives for their children.

I am ready to pack it in, ready to go, ready to be done with this esoteric little experiment in the human condition. I want this class to be over and I want to go home.

"What's the matter, Mom?" Lydia pops up from behind me and throws her arms around my neck.

I trace the scar on her forehead with my finger, studying its jagged edges.

"Nothing. Just feeling a little sad."

"Ill be right back," she says and she runs off to the sand castle my two sons are creating. They return and sit before me, the youngest, just barely 2, imitating his older brother and sister. He looks like a little Buddha with his big belly laying on crossed legs.

Lydia crawls up into my lap and looks at me thoughtfully. "You need an adventure, Mom," she says. "I think you're bored."

So we plan an adventure, elaborate and daring, once more.

Michelle Kennedy is a writer in Green Bay, WI.