An idealistic '60s commune meets the disco era head-on in this beautifully made film by a young director Bergman called a "master." 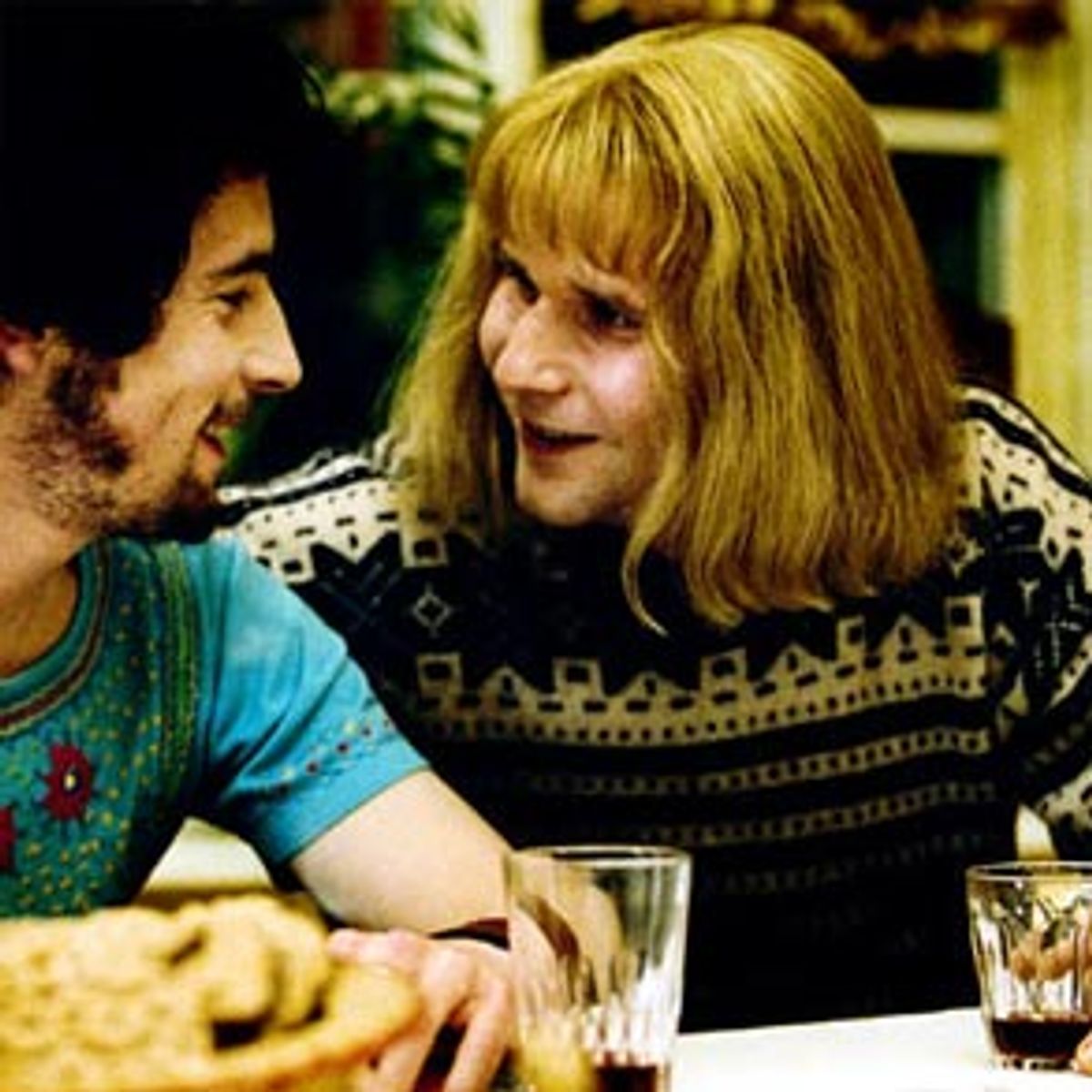 After seeing Lukas Moodysson's 1997 "Show Me Love" -- its original Swedish title, "Fucking Åmål," couldn't be used in the States -- Ingmar Bergman said, "We are witnessing the birth of a master." "Show Me Love" was a coming-of-age tale about two teenage girls feeling their way toward falling in love. You could call it a lesbian love story, but it's more about the exhilarating delicacy of any first love, and about teenage listlessness in small towns everywhere. (The title refers to the dull little town where the two girls live.) Moodysson's touch as a filmmaker isn't cloyingly sensitive; it has the roughness of a mother cat's tongue, tender and assertive at the same time.

Moodysson's new movie, "Together" (for which he also wrote the script), is even more beautifully made, suggesting that Bergman's original instincts about him were on the money. Moodysson is a tough-nuts modern humanist -- in that respect he's reminiscent of Jean Renoir, although he works on a smaller, more intimate scale and his approach is entirely different. He doesn't have Renoir's elegance as a stylist, but a Renoirian love for his characters, no matter how maddening their behavior, hovers around them like an aura. Their foibles make up the most vivid colors in his palette; he doesn't allow any superiority or smugness to muddy his view of them. What's more, he has a great knack for ensemble comedy, moving the story along while keeping each character in focus. By the end of the movie, you feel you've moved in with them.

"Together" takes place in a commune in the heart of Stockholm, founded much earlier but still going strong in 1975, long after America's (and most of the world's) youth culture have abandoned their notions of free love, harmoniously integrated extended families and naive political idealism in favor of discos and TV sitcoms. The commune, "Tillsammans," (Swedish for "together") is led by sweet-natured, conflict-avoiding Goran (Gustaf Hammarsten). His girlfriend, the buxom, irresponsible earth mother-flower child Lena (Anja Lundqvist), has designs on another of the house's inhabitants, although she still considers herself Goran's old lady.

The cooperative is a place where sexual openness at least tries to thrive, where homegrown vegetables grace the dinner table with joyless efficiency, and where bourgeois entertainments like television are strictly forbidden. There's conflict in the house, but Moodysson is more interested in the crackling humor, and the grudging love, that courses beneath it. Best of all, he shows no patience for the leftover bullshit of the '60s. When the characters pepper a household fight with tired old agresso-hippie shtick like "Calm down!" and "You're speaking aggressively," he zeroes right in on its smugness and thinly veiled hostility -- but he does it in a way that makes you laugh.

Other inhabitants of the household include Lasse, a cranky medical student (Ola Norell), and his ex-wife Anna (Jessica Liedberg), who has recently declared her lesbianism in the manner of a rooster greeting the morning. (Anna causes a stir one day by trotting into the kitchen wearing a top but no underpants and then aggressively defending her right to flaunt nature's topiary.) Klas (Shanti Roney) is a gay man who has a crush on Lasse; Erik (Olle Sarri) is a sexy, brooding old-style communist who stomps about in a constant state of disgust, annoyed that the rest of the commune's inhabitants (not to mention the world) aren't as committed to the Great Cause as he is.

When Goran's sister Elisabeth (Lisa Lindgren) shows up at Tillsammans, running away from her abusive, alcoholic husband, she seems like a visitor from another planet, with her bottle-blond bob, eyeliner and fuzzy, up-to-date sweaters. Some of the other members, clad in low-key mushroom colors as if ABBA had never happened, view her a bit suspiciously at first. And her two children, 10-year-old Stefan (Sam Kessel) and the shy, awkward 13-year-old Eva (Emma Samuelsson), feel so out of place in this household of weirdo throwbacks that you can almost see them shrinking into the wallpaper.

The rest of "Together" is an effortlessly liquid unfolding of events -- many of them outlandishly funny -- that underscores why communes founded on outmoded beliefs can't thrive, even as it's wholly sympathetic to the way most of us crave the companionship that families, real or cobbled together, provide. Slowly, Stefan bonds with Lasse and Anna's 8-year-old son Tet (Axel Zuber), named after the Tet Offensive -- before long they're happily playing Tet's favorite Pinochet torture game. (There's a priceless moment when Tet discovers that Stefan has brought real Legos with him. "Dad wanted to make Legos out of wood for me," he says wistfully, "but he only made two pieces.")

Eva, myopic and bashful, is the character you feel the most for; being 13 is hard enough anywhere, but she can barely muster the energy to deal with this place. As she explains to a neighbor boy who's curious about the unorthodox living arrangement at Tillsammans, "We have ugly clothes, and we listen to bad music."

Moodysson works magic with this community -- he may identify most with Eva, but he realizes that's only half the job: Understanding the others is the harder part. None of his characters are dried out and flat. He allows even the most annoying of them to win us over in some small way (except for the ramrod communist Erik, who doesn't want to be liked). Anna-the-lesbian befriends Goran's sister Elisabeth, and we eventually realize that there's real kindness behind her insistence that Elisabeth would really be better off as a socialist and should definitely stop shaving under her arms.

Moodysson makes us feel something for even the most dislikable character, Lena, whose behavior is indefensible -- when we see her, in tears, on the phone to her mother, it's impossible not to soften toward her. And Moodysson doesn't give Elisabeth's troubled husband short shrift, either: He never slights the man's pain at being separated from his family.

Maybe part of the reason "Together" is so enjoyable and so resonant is that most of us, more than 25 years later, still feel the effects of the '60s in both good and annoying ways. The spiritual descendants of Tillsammans still walk among us, most notably in whole-foods markets everywhere: They're the ones who shove their soy milk and wheat-free crackers on the belt ahead of you (so busy giving peace a chance in their youth, they never learned the basics of queuing up), and then waste no time hustling their booty into their BMWs (usually adorned with just two tasteful bumper stickers, one for their kid's private school and another that says "Teach Tolerance").

People like that are a pain in the ass, but they always make for a good story afterward. Moodysson makes a good story out of the group at Tillsammans, but he goes even further. "Teach tolerance" is flapdoodle when you see it on a bumper sticker. Moodysson has taken that same vaguely aggressive command, distilled the good stuff from it and written its essence into a movie.

"Together" is the kind of picture that makes you feel that there are many good reasons to actually like mankind. As Renoir said, "There's one terrible thing in this world, and that is that everyone has their reasons." It's the best explanation anyone has yet come up with for the inexplicable presence of treachery, betrayal and misguided bravery in our world. No one has ever applied it to the refusal to shave armpits, but in Moodysson's world, that counts, too.