Total Request Live is billed as an exercise in music fan democracy, but one record label is doing its best to rig the election. 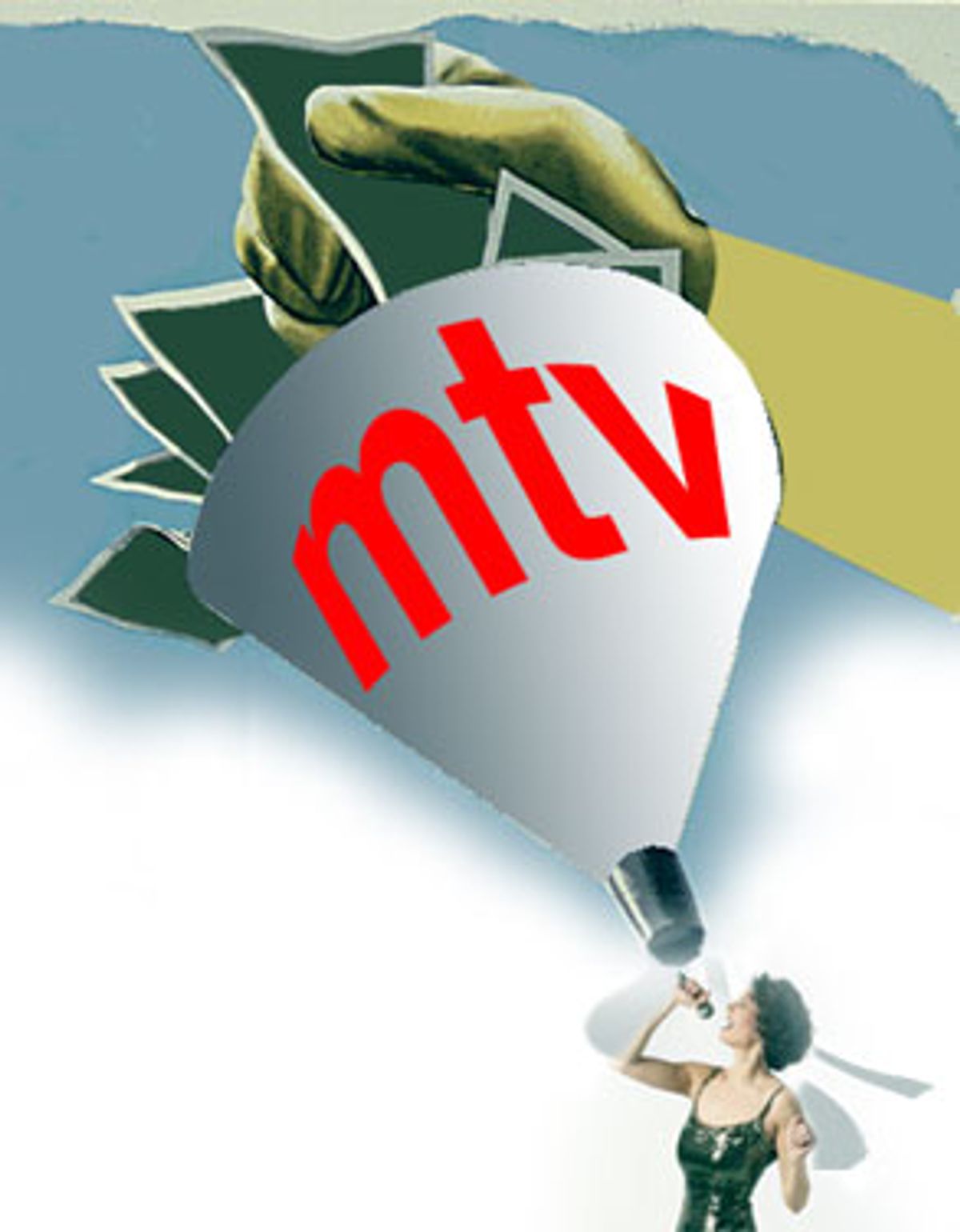 The premise is simple: Every day MTV fans vote for their favorite video via phone calls and e-mails. The results are tabulated and the top 10 clips air on the cable channel's flagship show, the Carson Daly-hosted "Total Request Live," or TRL.

The deceptively simple interactive formula has transformed the daily countdown into a pop culture phenomenon, a teen town meeting place that draws Britney, Madonna and Kid Rock on a regular basis. It's become home too, for a generation of teens who revel in their programming power and ability to pick the hits.

It's supposed to be a showcase for democracy: "'Total Request Live' places MTV's programming into the hands of the fans for one hour each weekday," boasted an MTV press release from last year. Teen power is not inconsiderable -- a spot on TRL can sometimes make or break a band.

But is TRL really as great an exercise in populist democracy as MTV would like us to believe? This is the music business, after all, built on smoke and mirrors. With TRL flexing so much hit-making power, do record company execs just sit back and cross their fingers, hoping their acts will top, or at least make, the mighty top 10 countdown? Nope. One prominent label, Interscope, is offering up big prizes and even specifically advising fans on ways to beat the computer defenses that MTV uses to counteract online ballot-box stuffing.

That a record company would stoop to such tactics is not particularly new. Record companies have long attempted to manipulate radio request shows by urging fan club members, or even record company interns, to work the phone banks and jam request lines in order to manufacture interest in a single. The payoff: If enough calls are logged, a station programmer might take note and move the song into heavy rotation.

Savvy radio station programmers, in turn, quickly developed their own defenses; asking random callers to give their ZIP Code or cross-street address. Those who paused on the other end were probably calling in from out of town and their requests were tossed. MTV boasts similar safeguards. TRL's phone lines are only open for 30 minutes each day, which makes the old multiple call-in ploy more difficult.

But MTV also encourages online submissions. And even though TRL's brass has bragged that the cable channel "has a very sophisticated computer system with built-in safeguards" there do appear to be some loopholes.

Last spring some Limp Bizkit fans received an e-mail from Interscope Records (or fanlist@interscope.com) urging them to keep the band's new clip "My Way" active on TRL's countdown. The best way to do that? "Make Continuous TRL Online Requests! Before you start, follow these instructions."

What followed was a seven-step set of instructions designed to counteract TRL's attempts to place "cookie" files on TRL voter computers so as to track (and stop) multiple votes. The instructions did not require advanced computer science -- all one had to do was manually delete the cookies placed by TRL before being able to vote again.

To show their appreciation for those who helped rig the system, the label gave away 150 Limp Bizkit T-shirts each day to TRL-voting fans, with one lucky grand prize winner scoring a Sega Dreamcast autographed by Bizkit front man Fred Durst.

Contacted last spring, MTV's executive vice president Dave Sirulnick expressed mild irritation at the label's action. But he noted that MTV does not mind multiple votes from fans, and he argued that if fans are busy casting ballots online for Limp Bizkit it's not for the chance to win a T-shirt, or even a Sega Dreamcast, but because fans feel passionately about the band. Besides, Limp Bizkit always scores well on MTV, so it wasn't as if a label had been able to elevate an unknown act with incentives.

"It still is for the fans," said Sirulnick, adding, "If it got to a place where serious prizes were being given away, like a new car, we'd go to the label."

It might be time for him to make some phone calls. Earlier this month Interscope sweetened the pot when it e-mailed a message to fans of the label's new alternative rock band, Puddle of Mudd: "Vote for the Puddle of Mudd 'Control' Video on MTV TRL & Win a TRIP to meet the band and Fred Durst! You and a friend will be flown out to Los Angeles to be on the set of Puddle of Mudd's next video shoot, to be directed by Fred Durst! Meet Fred and the band as you hang out on the set for a whole day ... go behind the scenes and see what really goes down ... VOTE FOR 'CONTROL' NOW!!!" According to accompanying rules, the grand prizewinner will be "the person who votes the most for Puddle of Mudd's 'Control' Video on TRL." (Durst signed the band to his Interscope-distributed label.)

So in an effort to maintain TRL's integrity, is MTV moving in to shut the contest down? MTV's Sirulnick declined to comment. And as of Monday, the Puddle of Mudd contest was still up and running.

But if the band breaks into TRL's top 10 soon, at least you'll know why.