Anne Marie Smith, the other other woman in Gary Condit's life, is fighting back after Condit done her wrong. 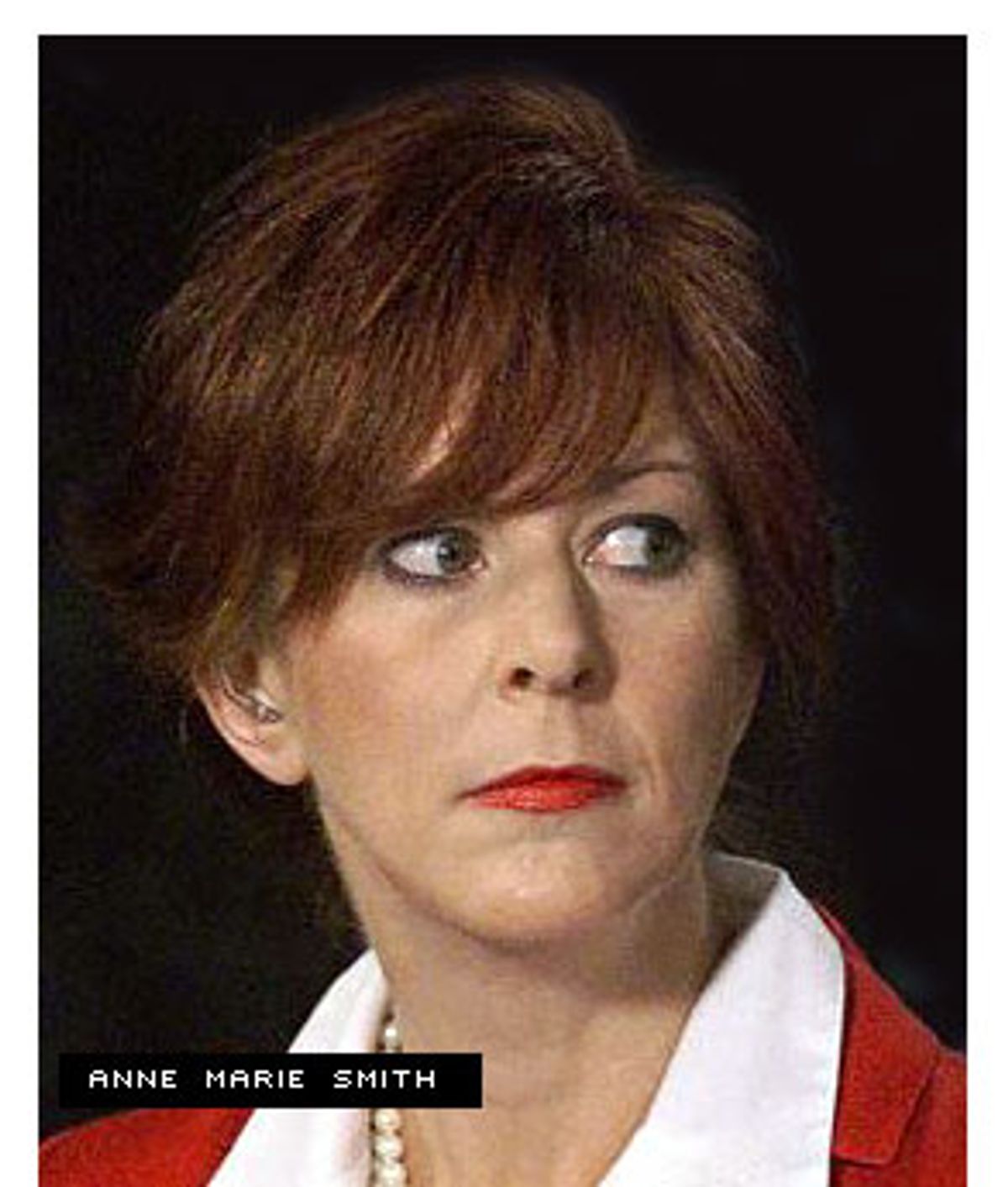 As critics and allies alike decry Rep. Gary Condit's recent media blitz as a disaster, it's clear that his strategy of attacking his attackers -- most notably Chandra Levy's family and flight attendant (and other other woman) Anne Marie Smith -- backfired badly.

Condit treated Smith with particular contempt. In interviews with ABC's Connie Chung, a Sacramento reporter and other journalists, he either minimized or denied his relationship with her, denied asking her to sign an affidavit swearing they didn't have an affair and accused her of peddling her stories about him for fame and profit. Now Smith is fighting back, and she appears to be working from the playbook of famous "other women" from the Clinton-Lewinsky saga: scorned women whose anger was exploited -- and quickly overshadowed -- by the anti-Democrat zealotry of their handlers.

This week Smith's attorney Jim Robinson teamed up with the conservative legal gadfly Judicial Watch to file a criminal complaint against Condit in the congressman's home district, hoping to prompt a grand jury indictment against him and others close to him for trying to get Smith to sign a false affidavit. That, according to the complaint, demonstrates an attempt to obstruct justice and to get a witness in the Levy case, Smith, to commit perjury.

Suddenly, the flame-haired flight attendant seems to be playing the scorned woman to the hilt, going after Condit with the same doggedness that raised questions of ulterior political motives of Paula Jones, who sued the president for sexual harassment.

But before the media discredits her as the attention-seeking harlot Condit so desperately wants her portrayed as, it's worth seeing her for what she is: one of the true casualties of Condit mania, who was dragged into the public sphere against her will and then smeared by the man she was sleeping with -- the same man who has spent the last four days complaining about how the media has spread lies about him. If she's pursuing revenge, there's a good case to be made that she's earned it.

Smith, Condit told ABC's Connie Chung last week, has "taken advantage of this tragedy," exploiting the situation for "her moment of publicity or financial gain." He was even harsher during an interview with local California station KOVR, stating, "You have to question Anne Marie Smith's motives. Her motive is to sell a story to a tabloid; that's what she did."

His attorney, Abbe Lowell, added insult to injury during his own weekend media appearances. The difference between Condit's and Smith's accounts of their relationship, Lowell implied, was an age-old disagreement that often breaks down along gender lines: She thought something significant happened between her and the congressman, but Condit didn't. Lowell's wink-and-nod strategy prompted the usually congenial Larry King to quip, "That depends on what 'is' is," a crack that brought up irresistible parallels between Condit and Clinton. (Lowell called the crack "unfair.")

But there's no evidence that Smith herself sought out either fame or profit by peddling the story of her affair with Condit. Tony Frost, the editor of the Star, which first published the name of the "curvy redhead" who "had a clandestine year-long affair with Condit," says he never paid Smith for the story. He says his paper got the story not from Smith, but from friends of hers who "didn't like the fact that she was involved with Condit," and offered help with a story.

One of Smith's old roommates, who spoke to Salon on the condition that her name not be revealed, confirms that she and not Smith helped the Star with its first story. She admits taking money from the tabloid, but says the paper contacted her and other Smith roommates first.

Then, after the Star ran its initial story June 15, which alluded only to a "stunning redheaded stewardess," the paper tried to negotiate a deal with Smith to tell her story, Frost says. "We approached her in San Francisco. We approached her at her parents' house in Seattle," he says. "We didn't want to name her and have other people chase her." She turned the Star down. According to sources close to the negotiations, the offer was in the five figures.

Instead, the Star relied on Smith's roommates -- co-workers she considered her friends -- to turn her into a tabloid celebrity, and went ahead and named her when the paper hit the stands June 22. Smith's roommate wouldn't say how much she was paid for her information. Smith has claimed she found the contract in their apartment, and it was for $2,500. The roommate doesn't dispute that.

The roommate says that the Star approached Smith several times, but Smith refused to speak to reporters. She ratted out her friend, the roommate says, "to help find this girl who is missing and help keep the people who live at our apartment and Anne Marie safe." Safe from what? She couldn't really say, but she added she felt safer now that Smith has a lawyer and that her name is public -- even if it's synonymous with the adultery.

She also defended her role with the Star as "a way of getting the correct version out there. Because they had one that they were going to put out there anyway." In fact, she minimizes her role as something along the lines of a paid fact-checker.

"I told [the Star], I'll confirm this or I'll deny this," she says. "They were going to go after her character in a way that wasn't true and would have made her look bad."

So, she thinks she actually saved Smith from a more damning fate in the tabs? "Well, I think it helped because she's out of danger. Because nobody knew about it but the people around her; her family didn't know, nobody. And she wanted to keep it that way," she says.

"I knew that my relationship with [Smith] would be jeopardized after this," the roommate now says, "but I had to decide what was more important." Besides, she says, the Star's payment helped cover the expenses after Smith moved out. "You know, it covered her costs for moving out, because we have to cover her rent now."

After the Star finally published her name on June 22, Smith still kept a low profile, and didn't actually come forward until a July 3 appearance on Fox News, in which she claimed that Condit and his attorneys had asked her to sign an affidavit claiming that the two never had an affair. A week later, she went, with her attorney Robinson, on "Larry King Live," appearing convincingly human, uneasily answering King's questions and saying that she would continue to work on the federal investigation into whether Condit had possibly obstructed justice by asking her to sign the affidavit. She then vowed to make no more media appearances, and said she would attempt to return to her life as a flight attendant -- a promise, it appears, she has kept.

But if she had a yen for private life, she made a mistake hiring Robinson, who seems to have a yen for the spotlight -- and for airing the most lurid allegations about Condit. (The anecdote about the S/M-style ties under Condit's bed came from Robinson, as well as the news that discussing his homosexual fantasies was a turn-on for the congressman.)

Still, Smith's profile seemed to diminish with time, and it began to seem like the next time we might hear from Anne Marie Smith would be if she took our drink order aboard a cross-country flight on United.

Until Condit went after her in the Chung interview.

It wasn't just his allegations that she was trying to make money off their affair that likely enraged Smith. She had to be startled, and a little appalled, by his telling Chung that they didn't, in fact, have a relationship.

Chung: "I mean, why would you want her to say that she didn't have a relationship with you?"

Condit: "Because she didn't."

He started backtracking almost immediately. To Newsweek's Mike Isikoff, he said, "What I meant to say was I don't know what Anne Marie thought she had with me, but in my opinion we did not have a relationship."

Then, during his interview with Larry King the next night, Condit attorney Lowell played his nudge and wink game:

Of course, in trying to be evasive, the Condit camp came off looking even sleazier. Anne Marie Smith, they seem to be saying, wasn't about a relationship; she was just about sex.

Claiming that they never had a relationship could be a way, some legal observers have speculated, to possibly skirt an obstruction of justice charge, should the federal investigation proceed. He can now say, the logic goes, that in asking her to deny the relationship, he was only asking her to tell the truth -- that it wasn't actually a "relationship," though they may have had a sexual affair. That could potentially protect Condit from the only serious charge that he may wind up facing from the whole scandal.

Most legal analysts agree that Condit doesn't seem to have much to fear from Judicial Watch, whose latest move appeared to be a shrill publicity stunt. In fact, the Judicial Watch gambit may backfire and hurt Smith herself, ensnaring her in the ideological crusades that have distinguished the anti-Clinton zealots, which could reduce her legitimate claim on public sympathy and outrage.

Still, you can't blame Smith for wanting to exact a little revenge for the last few days. And if she and her controversy-savvy new team manage to drum up more embarrassing information on Condit, he can't say he didn't have it coming.