Femme fatale Jane Greer had a scent about her that was sweet, but with a hint of death. 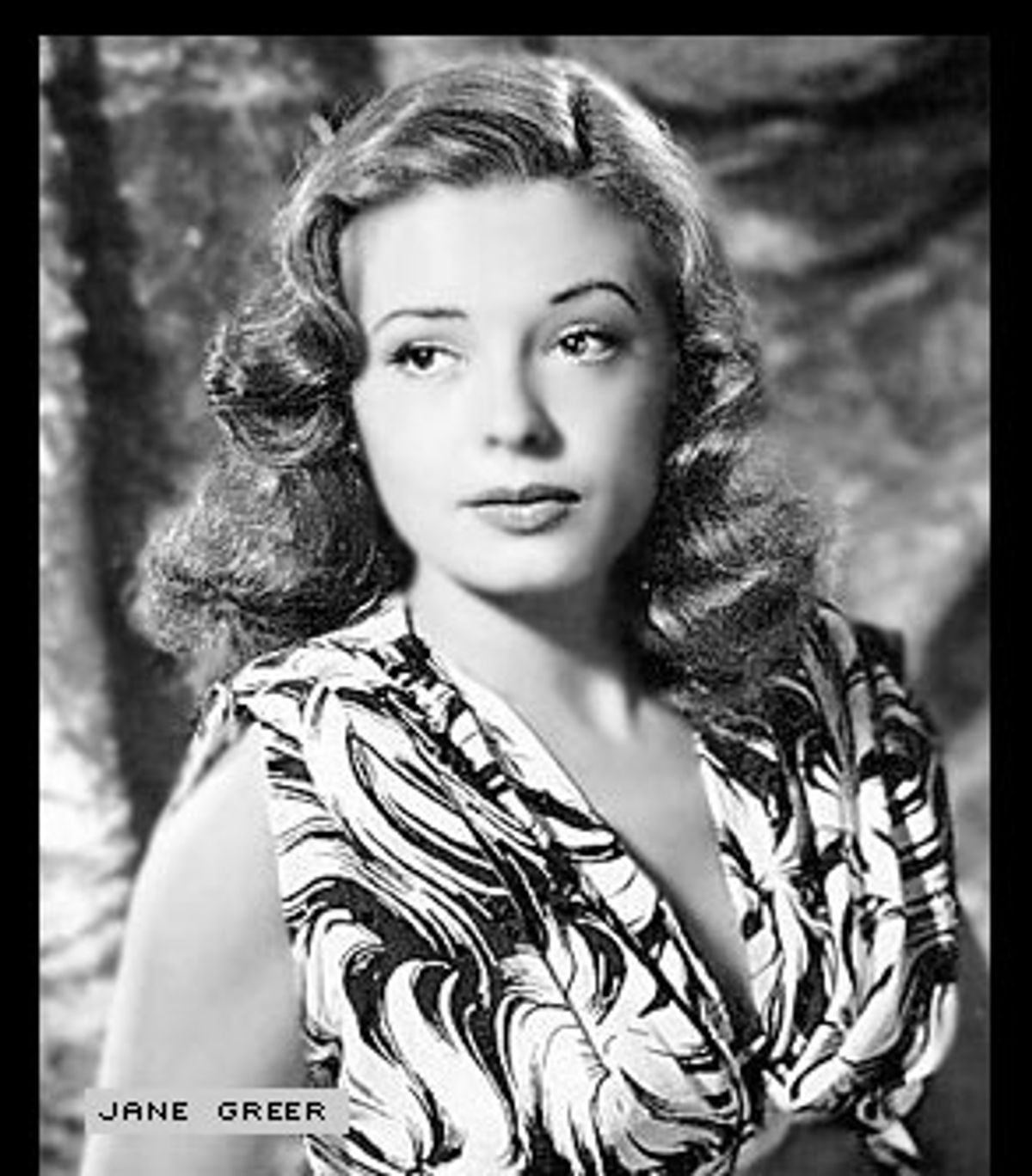 "I go there sometimes," says Kathie Moffat, as an afterthought, to Jeff Bailey. They have met, as if by chance, in a cafe in Acapulco next to a small movie house. She has strolled in out of the day's last sunlight in a pale dress and a wide-brimmed straw hat. In fact, he's been sent to find her, and maybe she knew that or guessed it already. Knowing things seems to be her trade. Still, she tells Jeff about this other place, where they play American music, and the way she says it -- "I go there sometimes" -- makes it one of the more mysterious lines in American film. Somehow, you have the worst thoughts about the other things she does. Yet you know you're doomed to find out.

This is a 1947 film, called "Out of the Past." Jeff is Robert Mitchum, and Kathie Moffat is Jane Greer, who died this week. No matter that she was one of those dark-eyed, dark-haired girls noticed by Howard Hughes, given a contract and offered much more, she didn't really have a movie career. Only a few years after she'd begun, she settled down with a second husband to have a family. But when you learn that the first husband was Rudy Vallee (23 years her senior, and wild), you realize how close she came to the kind of craziness that tangles the life of Miss Moffat.

I can't really say that Jane Greer was a great actress, or that she might have been, given better opportunities. Chances are not, or she'd have stuck at it. But she had a lethal smile, long floppy hair and eyes like large blueberries floating in cream -- you wanted to play bobbing for eyes. She was one of those women you could smell, even on film. Have you noticed that? There are some actresses who have a fragrance, or a scent. And with Jane Greer it was very sweet and sophisticated, until you got the aftertaste -- and there was something like death in that.

You could say she was lucky. "Out of the Past" is a very good film: Jacques Tourneur knew how to direct such pulp so that it seemed poetic, she had Nicholas Musuraca to gather the shadows around her pale face, she had yards of tart dialogue and she had Robert Mitchum to play off.

No matter how many times I see the film, I can't give up wondering on those other things Kathie Moffat does. In the story, you see, she has run away with $40,000 of Kirk Douglas' money. And she has ended up in Acapulco where she has a little house that probably rented for $125 a year then. And she takes a drink occasionally. But she's hardly extravagant. As well as going to this bar sometimes, what does she do? There's something about her that makes me feel she knows how dangerous she is so that she's made a pact with herself to be alone as much as possible.

So I see her (this is 1947, after all) listening to Charlie Parker records, reading "The Sheltering Sky" and cutting the legs of spiders to practice her fine touch. And being bored until she could scream. So then, at witching hour, the witch puts on that wide-brimmed hat that throws such cute shadows, and goes out looking for the next feeble hunk.

Acapulco was much too crowded. She should have kept going south -- to those jungles where the insects are big enough to fight back.

Except that all of the above is what you might call a classic femme fatale scenario, and femmes fatales were usually the creation of men who were afraid of women or hated them. Those guys always knew in their jittery hearts that a femme fatale would betray them, sooner or later. Whereas, if you look at the phrase "femme fatale," maybe it just means a woman who is going to die -- or one who can't shake that knowledge. So maybe she stayed at home, read a little Jane Austen or listened to Ravel, and wondered how she might manage not to be bored by self-dramatizing men. "I go there sometimes."