Did Princess Diana's life (and its ending) sound the death knell for that most parasitic of institutions, the British monarchy? 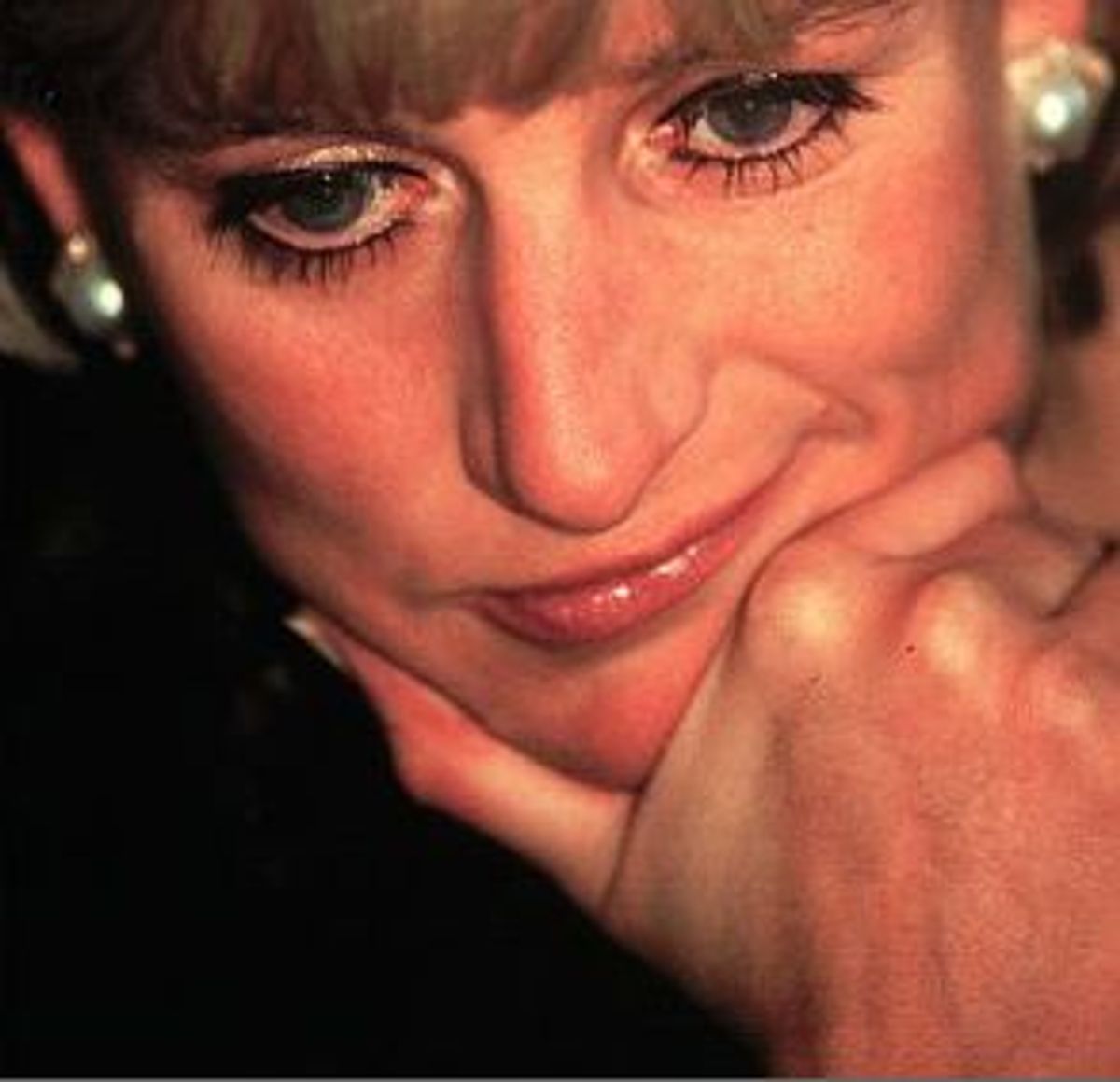 As we arrive at the fourth anniversary of the death of Princess Diana, who was killed in a most undignified way as she made a desperate flight from the predatory paparazzi she cleverly baited and then reproached, it is time to consider a new way of commemorating her life and death. Rather than lament her untimely demise and bemoan the loss of any other selfless celebrity willing to risk death by sauntering over landmine-ridden Africa, or hugging malnourished babies and AIDS-stricken political refugees, isn't it time to celebrate her life and death in terms of the larger political goal it served for the modern world? Diana in her life, and by default through her death, may have sounded the death knell for that most archaic and parasitic of institutions: the British monarchy.

The glitzy, unabashedly sexual Diana, cavorting with working-class bodyguards and sashaying on Mediterranean beaches revealing her tawdry tan lines and pre-cellulite Botticelli thighs, was a major embarrassment to the House of Windsor. Every public act she undertook after her divorce from Prince Charles was seen as diminishing the reputation of an institution that some feared had begun to see its waning years. Go down, Bill and Monica! Diana and Charles beat you to it.

But the imprimatur of royalty, coupled with the assumed inherent possession of virtue and goodness that title denotes, made them, in the eyes of sympathetic royal lovers, unlucky gentle creatures caught up in the insatiable cravings of an invasive and cruel world. Bill and Monica, it is said, made themselves into common sleazes by their acts. Such are the wages of the privileged blue-blooded class. And such are the wages of oppression under which Diana died and Charles thrives. You, dear Bill and Monica, are, like the rest of us, mere commoners.

Had Diana married Dodi Al Fayed, her racially vague and somewhat androgynous pretty boy heartthrob, the future king of England would have had a "commoner" and a North African as a stepfather, which should make those of us who suffer from principled sickness of the notion of royalty and blue blood righteously pleased. We fail to understand how people can respect lineage more than individual moral character. Make no mistake, in an era in which the equal moral worth of all human beings regardless of background has become the staple of progressive moral and political thought, the British monarch -- indeed, the very idea of monarchy -- embodies the worst social ills that deplete any hope for civilized society: racism, sexism, ethnocentrism and religious preference.

In a recent Vanity Fair article, Christopher Hitchens pointed out just how racist, sexist and ethnocentric the British criteria for becoming head of government are. The specifications are set forth in the 1701 Act of Settlement that stipulates that one has to be able to number oneself among the descendents of: "The Princess Sophia, Electress and Duchess dowager of Hanover, daughter of the late Queen of Bohemia, daughter of King James the First, to inherit after the King and the Princess Anne, in default of issue of the said princess and his Majesty, respectively; and the heirs of her body, being Protestants."

Hitchens' article makes clear what is meant by the term "heirs of her body." It is dependent on the notion of primogeniture, which gives preference to sons over daughters, as well as the children of sons over the progeny of daughters. Therefore, Prince William is second in line to the throne while Princess Anne, his aunt and the Queen's second child, is eighth. To be head of state one must also be Protestant and a member of the Church of England. One must descend in the male line, and listen to this: One has to be ethnically German as far as possible. Ethnocracy, the genesis of so much destruction, is institutionally guaranteed longevity via the veins of the blue-blooded royals.

This is offensive because it is just plain backward. It is Germany that emerged as one of the most savagely tribal states of the 20th century. To this day, Germany's citizenry laws are still ethnically determined. All those who aspire to German citizenship must demonstrate German lineage as fully as possible. This ought to offend the moral sensibilities of all Americans who relish the idea of a civic as opposed to an ethnic form of nationalism. Ethnic Turks born and raised in Germany and schooled in the language and culture have less claim of citizenship than ethnic Germans born and raised in Russia and whose ancestors have lived in Russia for over 200 years. That such individuals can't speak a word of German is irrelevant. Blood, that human body fluid most revered by a tribally minded people, is imbued with magical powers. Possession of a certain type guarantees the possession of all sorts of traits that are normally achieved by the rest of us through discipline and courage. (Similarly tyrannical and oppressive is the "one-drop rule" which identifies as black anyone with a shred of African ancestry, and that still holds sway in America.)

Perhaps I have a bias here. I am a product of a postcolonial island nation in the Caribbean. I've never lived under colonial rule and know little of its formal indignities. I continue to witness, however, the ghastly spectacle of a people who continue to see Her Majesty and all her progeny and their progeny as somehow representing a model of humanity that is innately better in some ineffable way. What is really sad is the failure to fully grasp the contradiction in the ideas of equality and human dignity that they hold dear and the values of monarchial lineage. There is a conflict between the principles people rely on to make sense of their lives as creatures of inherent dignity and the ways in which their veneration or silence about an institution that is deeply at odds with such principles renders them cognitively immobile. Thomas Paine said, "The idea of hereditary legislators is as inconsistent as that of hereditary juries; and as absurd as an hereditary mathematician, or an hereditary wise man; as absurd as an hereditary Poet Laureate."

The truth is that those who fail to abide by this fail to see how rotten to the core the idea of monarchy is today. Its corruption lies in the fact that it assumes a fundamental difference between the humanity we commoners possess and the humanity of a blue blood. The sorry thing about this, like the Catch 22 of original sin, is that most of us are accorded this share of a blighted inferior humanity before we have even a chance to achieve our humanity, let alone voluntarily corrupt it. No, we just have to be born. That's all. And so do they.

Diana's death, though, on the positive side of things, leaves much hope for what it may accomplish by default. It keeps open the possibility that the handsome and discreet Prince William may just seek to avenge his mother's death by refusing the crown at his own chosen moment. Witnessing firsthand at a young and impressionable age how the cult of celebrity and personality ruined and deprived him of his youthful and beautiful mother, William may rightfully decide to chuck it all with the same defiant spirit with which Diana chucked an unsatisfying marriage and the genteel, proper-lady lifestyle it required. "You demanded behavior fitting of the future king of England," one wants to hear him say. "Well, it was all for naught. I don't want it. Now carry the cross of guilt and shame for making her die in vain."

There is another reason Diana's death may bring about a natural dissolution of the monarchy. Her death leaves Prince William free of the overprotective and overly intrusive influence of a concerned mother bent on selecting a bride and an occupation outside of palace life for her son. The willful Jacqueline Onassis hypermanaged John Jr.'s life in every sphere from sabotaging his desire to become an actor while at Brown University to casting that other lens tease, Madonna, into the lost paradise of former Kennedy women. Diana's death, though, leaves open a plethora of wonderfully decadent possibilities for William.

With Charles happy at last thanks to years of lost Mum love being atoned for in the unpretentious warmth of Camilla Parker-Bowles, William will have what no other royal has ever had: complete sovereignty. If reports of his temperament and inclinations are to be believed, then we might yet see that boy chasing the stilettos of sleazy pop stars. Diana the hunted may have given birth to one who may yet reverse the fate to which she was sacrificed: a chosen vessel designed to genetically preserve fossilized relics of the past. Technology assures us the indefinite preservation of beautiful artifacts and monuments of the past. The royals, living fossilized effigies of the past, assure us their continued existence by their cultivated and guarded protocols, rules for membership and sacred traditions.

We pray that William, son of Diana the hunted, will become the hunter. We pray that in hunting for his own indubitable autonomy and identity that he will dissolve himself into the amorphous mass of commoners, diluting the distinction between them and that for which his mother was killed: an insatiable, maniacal urge in the hungry commoners to touch, see and ponder the deified human wonders of the past.

Jason D. Hill is professor of philosophy at De Paul University in Chicago and is the author of "Becoming a Cosmopolitan: What it Means to be a Human Being in the New Millennium."