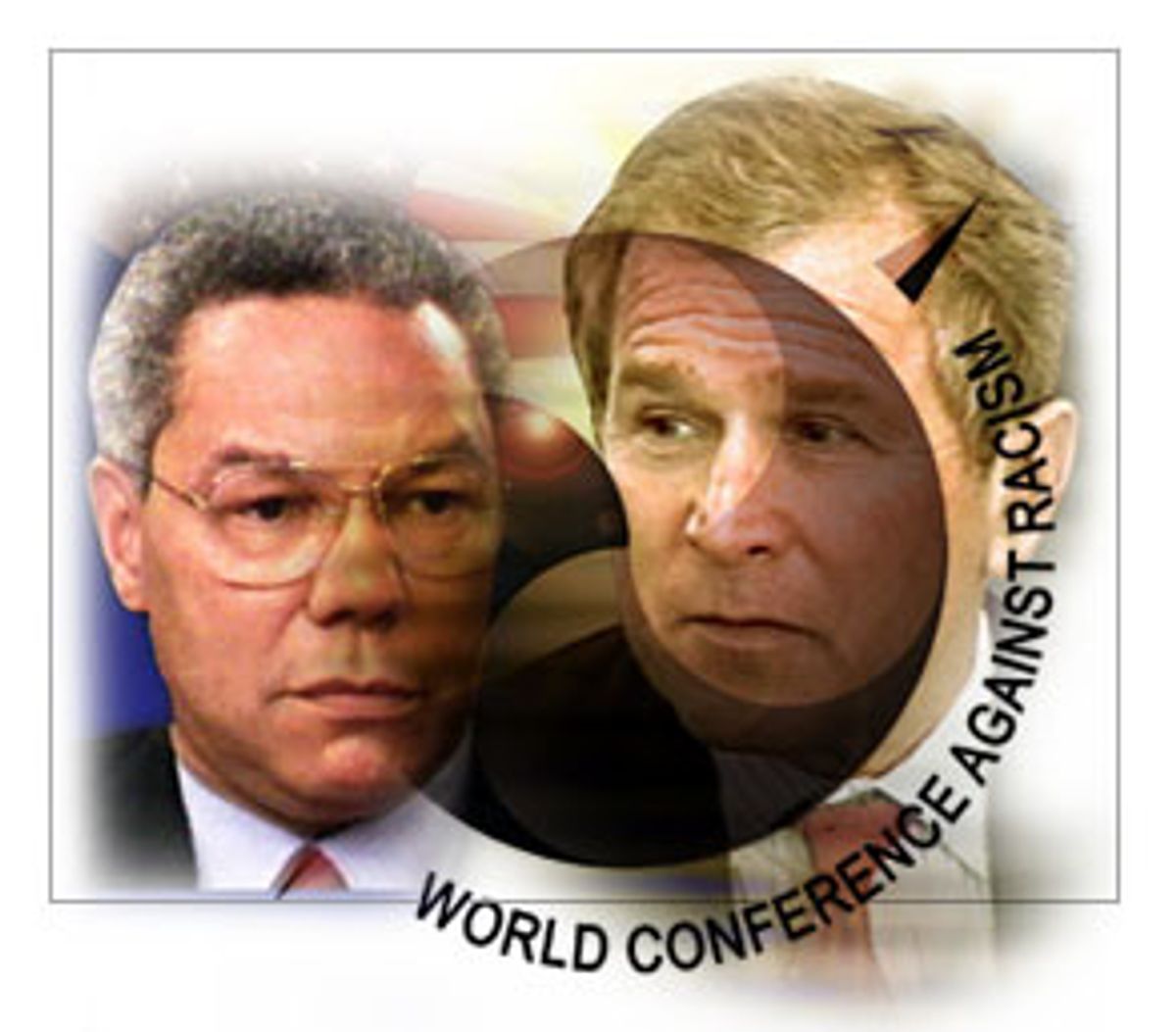 A relative handful of delegates at the U.N. World Racism Conference in Durban, South Africa, have come perilously close to doing what few thought was humanly possible. They may make President Bush look smart.

Bush was savaged for weeks before the conference by top U.N. officials, Asian and African leaders, and even some of his European partners, for his wrong-headed threat to boycott the conference before any delegates had arrived and any resolutions were proposed or discussed. At the time, Bush's pig-headedness bothered even Secretary of State Colin Powell, whose aides told reporters that the general badly wanted to attend the conference. (In an interesting racial twist, it was National Security Advisor Condoleezza Rice, the administration's other high-ranking African-American, who urged Bush to keep his distance from the convening.)

Powell understood what Rice did not -- and what the hotheaded delegates determined to use the conference to flog Israel clearly don't, either: The gathering was intended to draw up a battle plan to combat racism wherever it exists in the world, not merely to bash and marginalize countries for their racial, ethnic or religious problems. U.S. participation could have been crucial.

Even as Bush saber-rattled against the conference, there was still some hope the U.S. might get fully involved. U.N. and South African officials had already caved in to U.S. pressure and exorcised the disputed resolution equating Zionism with racism from the agenda. The resolution, passed in 1975 by a deeply divided U.N., was vague and ill-defined and had no force of law. It did nothing to alleviate Palestinian suffering. Instead, it made Israel dig its heels deeper and refuse more concessions on Palestinian rights, and cost the U.N. any standing it might have had to intervene credibly in the Middle East standoff. The U.N., with the consent of Arab nations and the Palestinians, wised up to its blunder and overwhelmingly voted to dump the resolution in 1991.

As for slavery reparations, the other agenda item Bush complained about, the conference's provisional agenda made it clear there is no consensus on the issue. It would have been an exercise in futility for conference planners to try to reach one. There are dozens of reparations groups, and they have repeatedly stumbled on the question of what type of reparations should be paid, to whom, and by whom. There are even differences between African leaders and African-Americans over who most deserves compensation. There is no reason to believe that delegates would be able to agree on a reparations plan once they arrived at the conference.

Once in Durban, however, the anti-Israel reparations forces hijacked the conference. In the end, the chaos may have vindicated Bush's decision to limit U.S. participation in the convening. It also ensured that the gathering would give short shrift to world problems the conference might have tackled: the ethnic warfare that still rages in Bosnia, caste oppression in India, the plight of the Kurds in Turkey and other Mideast countries, the continuing theft of Indian lands in Brazil, Mexico, and Guatemala, and the genocidal ethnic attacks in Congo and Rwanda. The conference could have targeted those corrupt African and Asian dictatorial regimes that elevate violence and terror to state policy against dissidents, many of whom are invariably of different ethnic groups. And it might have also shown a spotlight on Western nations' treatment of native peoples and minorities, from Australian aboriginals to Indians, blacks and Latinos in the U.S.

The conference might have even found a way to fairly press both Israelis and Palestinians back to the negotiating table, without the offensive rhetoric comparing the Israelis to Hitler. And on reparations, the conference offered a rare opportunity for Western nations and African leaders to come together on some common goals. It might have been the place to finally agree that a program of aggressive aid to Africa -- moving faster on debt relief, vastly increasing funds for AIDS treatment and prevention programs, pouring more aid into development, and negotiating more equitable trade pacts with nonwhite nations -- is a better way to repair the damage wreaked by slavery and colonialism than shelling out billions to individuals.

But those opportunities were lost, as a handful of zealots sacrificed everyone else's worthy issues to their anti-Israel agenda. Conference organizers poured four years of sweat into bringing white and nonwhite nations together to figure out a way to put teeth into the struggle against global racism. But because of the stubborn pique of some delegates their effort may go down the tubes. And what's worse, they made Bush look smarter than they are.