We moved in together and her libido nearly vanished. What happened? 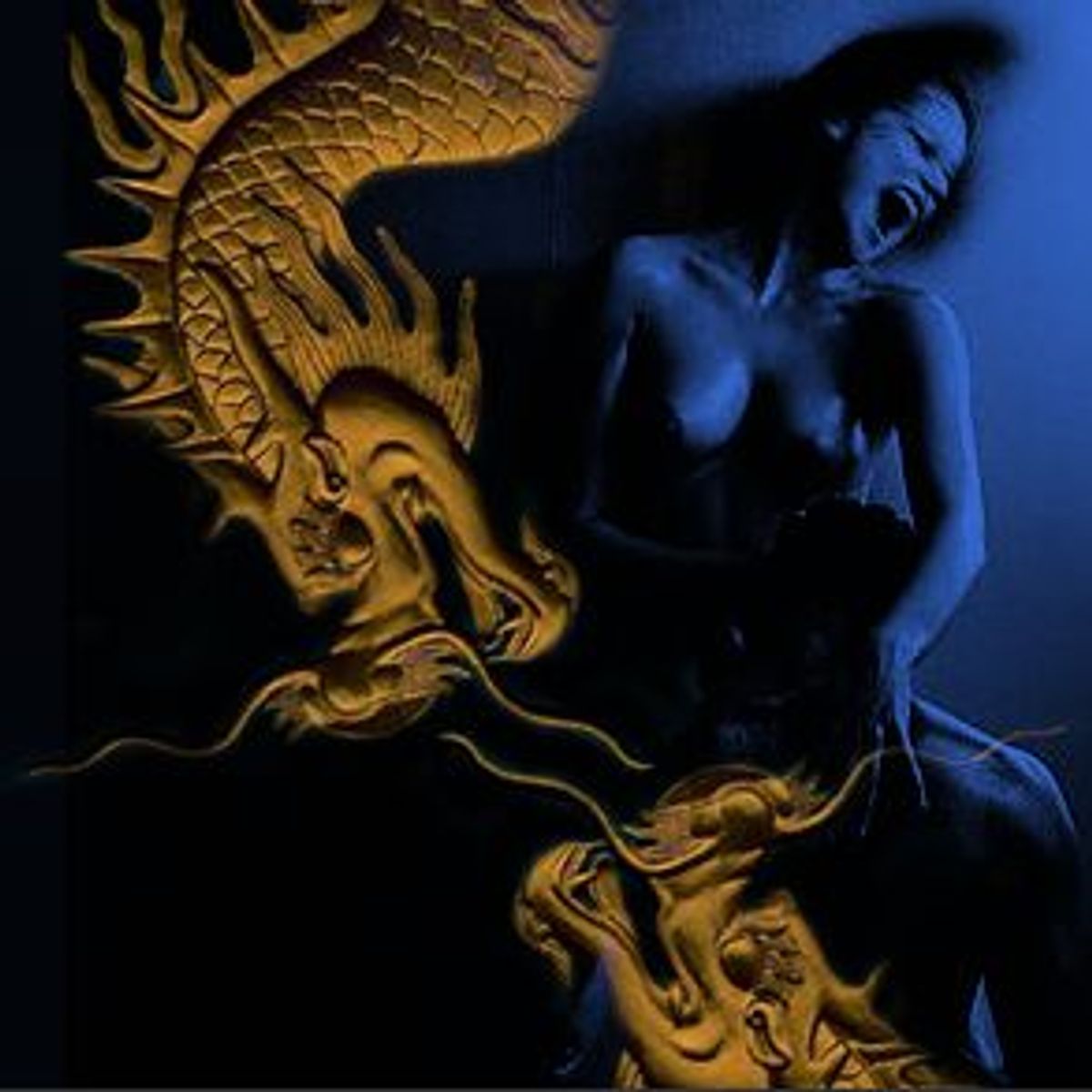 After going together for about a year, Elly and I got an apartment together. It was an exciting time, setting up a home together. We got along well -- except that maybe six months into our cohabitation, the balloon of Elly's libido sprang a leak and largely deflated. Permanently. Before this change, she had initiated maybe a third of our sex, and rarely declined my overtures. But over a period of a few months, her initiations dropped to near zero, and when I came on to her, I began hearing "not tonight, dear" with distressing frequency.

"What happened?" I asked her.

"Nothing," she replied. "I just don't want to do it as much anymore."

"Why not? Am I doing something wrong?"

"No, you're doing fine, great, in fact. I just don't want it as much anymore."

"Of course. I just don't want sex as much anymore."

"Yes, but not as much as you desire me."

Of course, I knew that women sometimes lose their sex drive. Men's folklore is filled with tales of women who are sexually insatiable until shortly after the wedding, and then they call a halt to fucking, leaving the man feeling suckered and bitter. Elly and I weren't married at the time, but I felt some of that. I also felt disappointed, and annoyed, sometimes angry. But most of all, I felt incredulous. How could Elly's libido practically vanish virtually overnight? That's a bit of an overstatement. Her libido didn't actually vanish. But it felt that way at times. We went from doing it almost nightly to maybe once every 10 days. It was a major change, and it hurt. I felt that if I didn't lean on her for sex, we might never do it.

We talked about it. She didn't think there was much to say. She just didn't want sex all that much anymore. Well, I do, I said. Well, I don't, said she. Sex is no big deal, she insisted. The hell it isn't, I replied. And round and round. Now, more than 30 years later, we still wrestle with the same issue. It's been our major sexual disagreement and a chronic irritant in our marriage.

Of course, I have more perspective on the issue now than I did when it first appeared. I'm well aware that our situation was and is typical. Many sex experts have said so. The heat of passion usually cools a year or so into a relationship. Then what the sex experts call "desire discrepancies" become very common. We had -- and have -- a big one. My passion for Elly has never cooled. She's the woman I love and I want to make love with her frequently -- a few times a week. She separates loving me from wanting to have sex with me. If I feel any deep-seated bitterness toward Elly, it's about our sexual frequency. I just don't comprehend how she can have so little libido. Never have, never will.

Back when our desire discrepancy first became an issue, I thought that Elly's libido loss might have something to do with another issue that had become increasingly problematic for me -- coming too fast, premature ejaculation. As I mentioned, shortly -- very shortly -- after entering Elly's vagina or mouth, boom, I'd come. No control at all. I naively assumed that my problem played a major role in Elly's libido loss. If only I could last longer, I thought, I'd be a better lover, and her libido would return.

So, back to the bookstore I went, and again, fortune shined. Masters' and Johnson's second book, "Human Sexual Inadequacy," was out in paperback. Among other issues, it described their program for curing premature ejaculation. I won't describe it here. There are plenty of more recent books that present today's version of it. Suffice it to say that the program was surprisingly simple and, according to M&J, amazingly successful. I rushed back to our apartment, confident that Elly would welcome the opportunity to help me last longer. We would implement the program together. I'd gain ejaculatory control. And then her libido would come surging back.

To my absolute amazement, Elly wasn't the least bit excited about the last-longer program. She didn't experience my lightning ejaculation as a problem. I had become a master at bringing her off with my tongue, which she enjoyed more than intercourse anyway, so what was the big deal about lasting longer? The big deal, I insisted, was that I felt out of control. I wanted to be in control. I wanted to last longer. Elly shrugged, as if my desire for ejaculatory control were silly. I went nuts. Lasting longer was very important to me. I couldn't believe that my best friend and lover could be so cavalier about something that meant so much to me. It was the flip side of the Orgasm Crisis, only this time, my orgasm was the issue.

We talked it to death, sometimes preserving a sense of humor, other times not. It was not our finest hour, especially mine. I thought Elly's reluctance to help me with the program was yet another aspect of her maddening libido loss. She was no longer into sex, in my view, so why work to make the hated thing take up any more of her precious time?

It took quite awhile to pull Elly's real reason out of her. She was painfully aware of my dissatisfaction over her loss of libido and our decreased sexual frequency. She feared that if I learned to last longer, I would use my enhanced sexual skill to find someone new. If I remained sexually handicapped, I was more likely to stay with her.

When the truth finally emerged, I was astonished. I love you, I told her. I have no desire to leave you. None. Sure, I've had problems with your libido loss, but every couple has issues, sexual and otherwise. I did my best to persuade her that I was with her for the long haul, and wanted to last longer because being faster than a speeding bullet did not make me feel like Superman. After this catharsis, she agreed to help me with the Masters and Johnson program.

Of all the sexual changes I've experienced in life, learning to last longer was the most amazing, the most satisfying. We worked our way through the program, and in a few weeks, I was cured. Completely. I could last as long as I wanted, then come whenever I decided to. I felt positively giddy with delight. I also felt very grateful to Elly and totally in love with her for helping me. Of course, she was concerned that I'd want to celebrate my newly acquired skill by upping my demands for sex. In fact, the opposite happened. Gaining ejaculatory control calmed me down about myself, allayed some of my manhood fears. To the extent that my libido was -- and is -- partially fueled by a need for personal validation, I felt less need, and didn't lean on Elly for sex as much as she feared.

I still wanted sex considerably more often than she did, so our basic dynamics remained unchanged. At one point, at my insistence, we even had some counseling. The therapist, who'd written a book for the publishing house I worked for, asked: Who controls the sex in your relationship? Each of us pointed at the other -- and neither of us could believe that the other felt that way. I felt that Elly controlled our sex life because she could always shut me down with that horrid word, "no." She felt I controlled our sex life because my badgering wore her down until she finally said "yes" when frequently she was not in the mood. You have a sex issue, the counselor said, but you also have a power issue.

The counselor said we had three choices: We could break up, stay together and resent each other forever, or come up with a workable compromise on sexual frequency. We opted for compromise. I wanted it three times a week. Elly was happy with twice a month. We settled on once a week. Elly had a hard time with that. She liked it to be spontaneous, when she was in the mood. But from my perspective, she rarely was, which was why we had to schedule our agreed-upon weekly tumble.

Of course, with the looser arrangement, our "once a week" often stretched to the once-every-10-days-or-so frequency of our pre-agreement days, leaving me feeling cheated. But Elly was willing to do it more than once a week on most vacations, so things almost balanced out. Since vacations meant more sex, I became much more interested in vacationing, which pleased Elly, whose favorite part of the Sunday paper is the travel section. Our desire discrepancy continues, but as long as we do it at least three times a month at home, and more when we're away, I usually keep my mouth shut. We've arrived at an uneasy but workable truce.

Despite ongoing conflict over our desire difference, our sex continued to feel remarkably fulfilling. In fact, as time passed, we both enjoyed it more, which surprised me. The improvement has continued to this day. Over the years we've come to know each other better, to understand what the other likes in sex. Despite our problems discussing the issue, we've reaped the fruits of previous discussions. The feeling is similar to spending time with old friends. New friends are great, but old friends know you better. So does a longtime lover.

One addition my lasting longer made possible was simultaneous orgasm, many people's Holy Grail of fucking. I was really into the idea that we could feel so attuned to one another that we would reach orgasm at the same moment and thrash around, to use David Bowie's words, "like tigers on Vaseline." Imagine my surprise when I found simultaneous orgasm to be a disappointment, in fact, a drag. Elly felt the same way. Oh sure, it was fun the first few times to have enough ejaculatory control to come when she did. And it's still fun every once in a while. But orgasm is an individual pleasure. Neither of us wanted to worry about the other's while having our own. Pretty quickly, we decided to take turns: One gives, the other gets, then vice versa. So much for the Holy Grail. The realization that we both preferred serial orgasm was a major sexual enhancement for us. We were doing it our way, and we liked it.

The same was true for 69. Way back when we first got into oral, we tried mutual sucking. But neither of us cared much for it. When I'm getting head, I want to concentrate entirely on my own pleasure. I don't want to have to deal with licking Elly at the same time. She felt the same. We prefer to take turns with oral. However, we enjoy giving and receiving hand jobs at the same time while kissing deeply. I could do that for hours.

By this time we were around 30. We'd been lovers for about 10 years, had weathered some sexual crises, and had settled on our own ways of making love. It felt good, great in fact. It felt more intimate than ever. We were more in touch with what the other enjoyed, the subtle nuances that stretched sensual delight almost to the point of orgasm, but not quite, the moves that kept us hot and panting for as long as we could stand it. Elly shed much of the passivity that had marked the beginnings of our sex life and took more initiative, which I loved.

Barry Sallinen is a writer and editor in New York.