It stands for Long Island Expressway, and it's a penetrating look at a 14-year-old boy's relationship with a pederast. 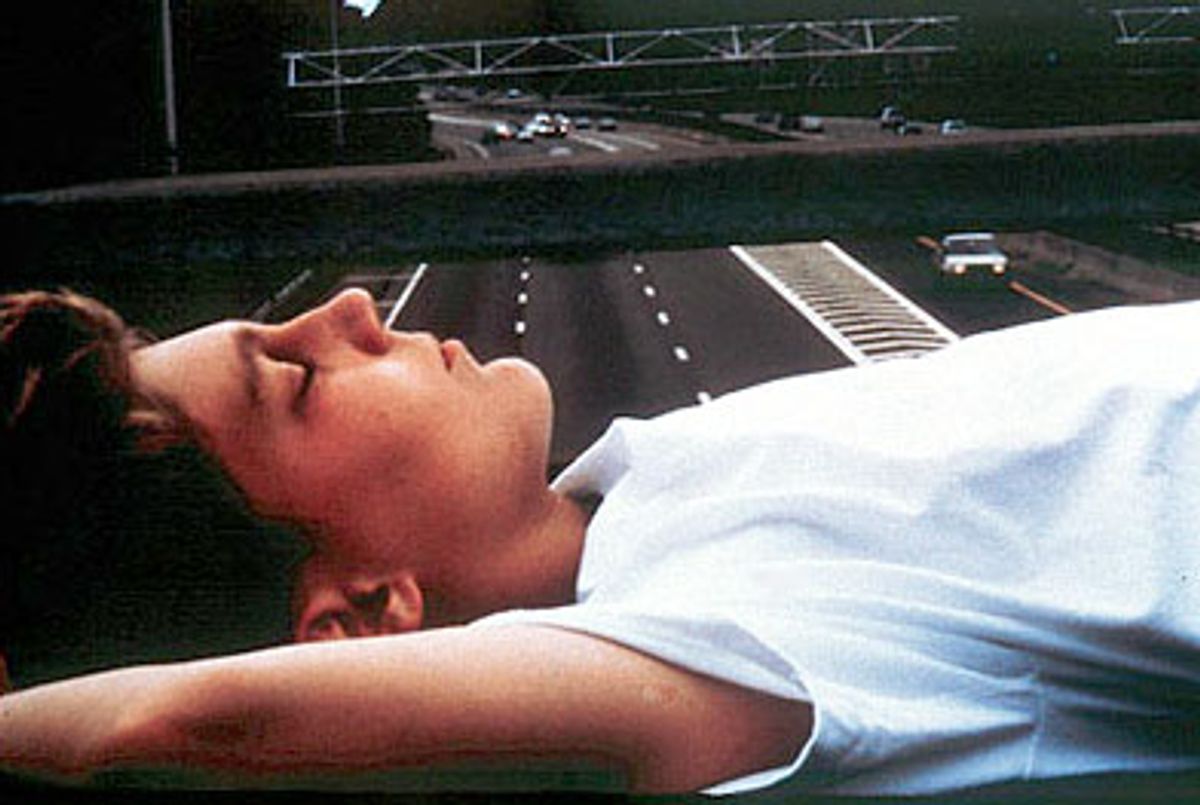 "L.I.E." (which stands for Long Island Expressway) is, thankfully, not as ordinary as its title. This first film, directed by Michael Cuesta (who wrote the script with Stephen M. Ryder), takes on a "transgressive" subject, a 14-year-old boy's relationship with a pedophile, and to its credit manages to avoid the smug self-satisfaction that has been the hallmark of American indie movies that have dealt with taboo subjects.

It's always amusing when indie filmmakers talk about their wish to shock "normal" moviegoers with their daring and provocation without realizing that the people they dream of shocking don't go to indie movies. The overwhelmingly liberal, affluent, educated and urban audiences who do turn out for indie movies take it as a matter of duty not to be shocked by what those pictures show them. That would be a sign of the most bourgeois unhipness.

Cuesta appears to feel no need for that type of self-congratulation. His treatment of the material differs from the typical indie approach in several noticeable ways. Though he doesn't particularly find any beauty in the Long Island suburbs where the film takes place, he doesn't, with the exception of a few ill-advised fisheye shots, present them as a strip-mall, cookie-cutter hell (in the manner of "Ghost World," "American Beauty" and anything by Todd Solondz). And though his characters are disaffected suburban kids, they're not dead presences on screen. His lead, Paul Franklin Dano, is a sensitive, expressive young actor who, you feel watching him, might be on the verge of doing some really fine work as his experience and instincts develop.

The most distinctive thing about "L.I.E." is that Cuesta seems to genuinely understand what it means to suspend judgment. I don't mean that he says pedophilia is OK, or that pedophiles are really nice, misunderstood people. Rather, working with a subject that might understandably give any of us pause, he has found a way to get through revulsion and allow us to respond to Brian Cox's Big John Harrigan as a person -- one whose motives are never clear and always somewhat ominous, but still a person.

The center of the movie is Dano's Howie, a 14-year-old boy whose life comes apart in the course of the week the movie covers. A few months before the film begins, his mother has been killed on the Long Island Expressway, and his father (Bruce Altman, who's very good in his small role) has immediately taken up with a young bimbo. Howie is too hurt to see that, for his dad, this anonymous sex is a refuge. He grows more distant from him, cutting classes and joining his buddies in a series of housebreaks. He's particularly close to Gary (Billy Kay), the most daring and charismatic of the group. Gary is also gay (though closeted to his buddies), and Howie tentatively tries to come to terms with his own attraction to Gary, though he can only really deal with those feelings in private.

When a housebreak goes wrong, Howie winds up being pressured by the victim, Cox's Harrigan, to make restitution for a pair of guns he and Gary stole. He can't, so Harrigan, whom Gary had been having sex with, puts pressure on Howie to become his new boy toy. Howie is scared and revulsed; but then Harrigan takes a different tack, letting the boy drive his sports car and encouraging him in the poetry he writes. And when Howie's father, who works as a building contractor, is arrested for using unsafe materials in a job, the stage is set for Big John to become an even larger part of Howie's life.

The strongest parts of "L.I.E." are the scenes between Cox and Dano. Dano, a diminutive kid, his hair turned up in a little butch-wax tuft at the front, has a preternaturally deep voice and a winning combination of self-protectiveness and vulnerability. He seems to have learned the gift of letting the audience in on his feelings even when he's just sitting quietly saying nothing. But it's Cox's performance that is remarkable here. In Cox's early scenes (including a rather caricatured sequence of Harrigan celebrating his birthday) he appears to be overdoing the heartiness. But that forced heartiness is part of Harrigan's affect. A former soldier, a "man's man," who's known to the cops in town, Harrigan both makes sense as a pedophile (someone whose purpose in life was defined by his strength over others) and as the sort of upright, red-blooded citizen no one would ever suspect. Cuesta pushes the gung-ho side of Harrigan, even down to having his doorbell play "The Battle Hymn of the Republic." But Cox makes him plausible and horrifyingly sympathetic.

It's a plot contrivance that Howie is left on his own after his father is arrested (surely the authorities would send him to juvenile services), but nothing about the way Harrigan takes Howie in or cares for him feels contrived. And that's precisely what's so ambiguously disturbing about the film. During his first night at Harrigan's house, Howie begins to kiss Harrigan's hands, as if the time has come to pay for the kindness the man is showing him. Harrigan firmly puts him off, telling him this isn't about sex. And the way Cox plays it, which is brilliantly, there's no way of knowing what the truth is. Is this a real, decent corner of Big John's twisted soul, or is it the most twisted, the breaking down of a boy's defenses as a means of seduction?

It's a gutsy move on the part of both Brian Cox and director Cuesta that they decide to play it as more the former than the latter. (Though Cuesta does come up with one memorably creepy moment: Big John cruising teenage boys in his sports car while Donovan's trippy, dippy "Hurdy Gurdy Man" plays on the soundtrack.) Whatever Big John's ultimate purposes there's no denying the connection that exists between him and Howie. Cuesta makes the audience do something very tough -- to credit that connection as genuine while at the same time putting it alongside Howie's discovery of Big John's Polaroids of underage boys.

It's a measure of how well the movie works that its most potentially disturbing scene is also its gentlest. Big John decides to show Howie how to shave the blossom of peach fuzz on the boy's cheeks, gently scraping it off with his straight razor. Some of the audience at the screening I attended went rigid with fear when that straight razor appeared. I never felt it. Cox made me believe that, somehow, this man really felt tenderly toward this boy.

How that would resolve itself we don't get to find out; the movie dribbles away in a bad ending that feels utterly phony in its bleakness. And I have to say that, though I admire much of what Cuesta does in "L.I.E.," the film didn't give me much pleasure. I didn't find it unpleasant or repulsive; it's just that I felt he was too much outside the story. The film interested me, but apart from the performances of Dano and Cox it didn't compel me. But Cuesta isn't a dilettante. There's real talent on display here. I mean it as a compliment to say that in the barbed and off-kilter landscape he investigates, he never comes off as a tourist.