At the MTV Video Music Awards, it was all about the product. And Jamie Foxx wasn't funny. Calling Andy Dick! 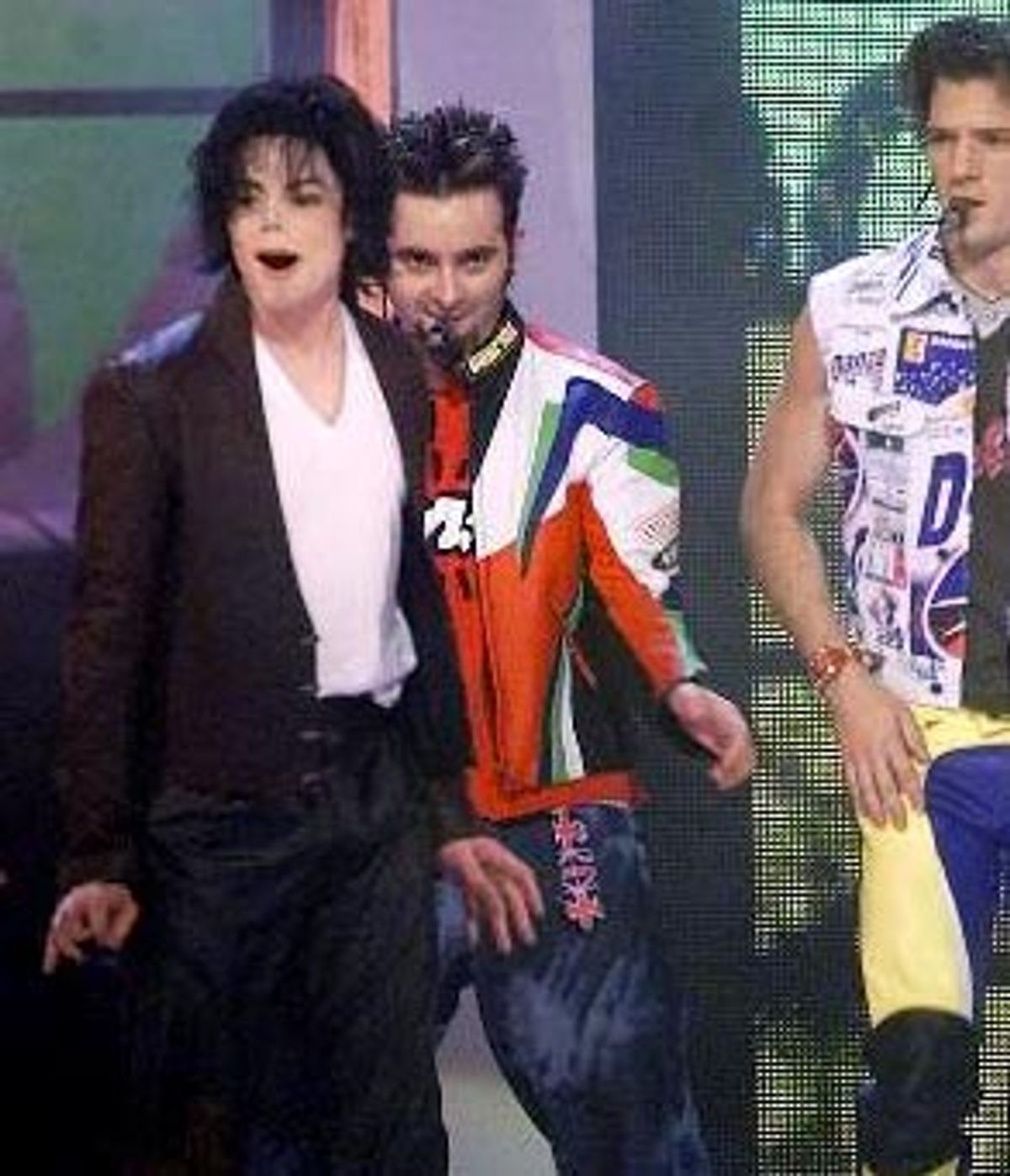 Rock stars for sale! At the MTV Video Music Awards, it was all about the product. Calling Andy Dick!

Whoever creates the in-house promos for MTV deserves a raise. They were, unfortunately, the highlight of MTV's Video Music Award telecast Thursday night, live once again from the Metropolitan Opera House at Lincoln Center in New York. The show itself, once a wonderfully oddball celebration of pop culture, has become increasingly rote over the years, and last night it came off like a burdensome drill.

It was all about the product. The two members of rap winner Outkast plugged their new clothing line. Snoop Dog did the same for his own line during the post-awards show. Busta Rhymes hyped his new record's release date. So did Jay-Z. So did DMX.

Macy Gray, who seemed like a class act way back in 2000, wore a dress that read on the front, "My new album drops Sept. 18." On the back: "Buy it." Limp Bizkit's Fred Durst wore a shirt touting his new discovery, Puddle of Mud, whose debut album, released on Durst's record company, hits stores next week.

Meanwhile, Wyclef Jean and Britney Spears were shilling for Pepsi -- and Aerosmith for Dodge -- during the commercial breaks. And Levi's actually sponsored an entire awards category: Best New Artist.

Was Chris Rock's wickedly funny VMAs hosting stint a few years back just a mirage? And did Pearl Jam and Neil Young actually crank out a jaw-dropping, tough version of "Rockin' in the Free World" during a VMA telecast in our lifetime?

It's hard to imagine those kinds of crown jewel MTV moments while sitting through last night's three-and-a-hour non-event.

The host was Jamie Foxx. His opening, with stale jokes about Clinton, Condit and Bush, seemed more like a weak Jay Leno monologue, albeit with more crotch grabbing and jokes about his penis size. (The demented Andy Dick would have been a much better choice for host; his three-minute appearance as pop queen bitch Daphne Aguilera was brilliant.) He lacked the stature or the humor to anchor a show of this size. When he brought on a large guy in an overly tight Little League uniform -- it was a joke about the recent scandal about the overaged player -- the camera cut to a shot of Puff Daddy not getting it. We didn't, either.

And the VMAs' writing has become a bad joke; the stultifying banter, combined with stoned, overly cool or just uninterested presenters, made the show a chore to sit through. Mary J. Blige, whether due to pharmacology or apathy, could barely articulate a sentence. Said Christopher Walken, eyeing the teleprompter warily as he introduced 'N Sync: "There was stuff I was supposed to say, but I don't want to say it."

As for the performances, sure, the Weird King of Pop, Michael Jackson, made an unannounced return with a very brief dance cameo during 'N Sync's "Pop" number. But the real industry shock would have been if Jackson's hadn't showed up; he's in town for the weekend, performing at New York City's Madison Square Garden, and in the process of trying to jump-start his career with a new single. A VMA telecast with no sight of Jackson could have sounded a death knell for the comeback buzz. (Foxx got off his one good line courtesy of Jackson's cameo, dubbing MTV "The Recovery Channel.")

It's the Synergy Channel, too: CBS is broadcasting a concert film of Jackson's Madison Square Garden dates later this year during sweeps week, and CBS and MTV are both owned by Viacom.

Speaking of which, Viacom ordered WWF to move its high-rated "SmackDown" tonight on the Viacom-owned UPN so it wouldn't compete with young male MTV viewers. (VMA ratings were off badly last year and Viacom was taking no chances.) WWF complied and moved "SmackDown" to Tuesday this week, where it promptly won its lowest ratings ever. Ouch.

Shock rockers Mudvayne received the first M2 award, designated for "underground" acts. The band took the stage with colored mohawks and fake bullet hole wounds in their head, and then promptly thanked their product manager from the stage.

'N Sync was the night's big winner, picking up four MTV Moonman statues during primetime. So it's just as well the Backstreet Boys, who made a brief appearance at the beginning of the show, had to travel across the Hudson river for a concert in New Jersey last night.

The show did shine occasionally, like when rapper Jay-Z took the stage outside the Met and performed "Izzo," his latest urban anthem; "Can't leave rap alone/the game needs me." True.

And U2 was its usual tight self, ramming through two songs from its new album. (The band was the only foreign act included in the mix last night, which may have added to the telecast's claustrophobic feel.) Receiving MTV's Video Vanguard award, U2's Bono remembered the late Joey Ramone and brought out the three surviving members of the seminal punk band. (Did the Ramones ever get a video played on MTV?) But the gesture was a decent one, as was the remembrance to Aaliyah, the young R&B queen who recently died in a plane crash.

Jennifer Lopez was smart enough to add some extended, Latin-flavored dance moves to the beginning of her "I'm Real" performance, realizing that when she and rapper Ja Rule actually launched into the mid-tempo song onstage it would consist of her walking around and him following. The look on J.Lo's face later in the night when Triumphant the Insult Comic Dog puppet (a shtick from the Conan O'Brien show) sidled up to her and asked if he could sniff her butt was priceless.

Whoever Lopez used for choreography, Britney Spears needs to hire. The pop singer's much-hyped performance, in which she debuted her new not-so-bad single, was a complete flop. She lip-synced poorly, meandered around the stage, and hoisted a live snake around her neck.

Meanwhile, during her performance, Missy "Misdemeanor" Elliott wore perhaps the single most unflattering outfit ever seen on a nationally televised awards show.

Rock bands Staind and Linkin Park proved why MTV has veered so hard towards urban and pop route this year; nobody other than those band's family members will remember those VMA performances come October.

But everyone will remember the genius MTV promos. National Geographic-type segments featuring some very weird animal behavior introduced each group of nominees; you didn't want to see some plastic star get a Moonman, you wanted to see those okapis, or whatever they were, hop a little bit longer. The conceit of another odd series was that the videos were just working stiffs in a nondescript job.

They have to be seen to be appreciated, which is more than you can say for the VMAs themselves.